Terrain: From the Auction Bench to the Battlefield

At the Games Plus miniatures game auction in October, I nabbed a pair work-in-progress terrain pieces. They were on their way toward becoming a pair of urban ruins, but their owner decided to get rid of them before completion. When I picked them up -- for bargain prices -- they were basically two chopped-up resin building wall corners sitting on a piece of hardboard. No extra bits, no rubble, no gubbins, no embellishment -- and no paint. Just barebones resin walls hot-glued to the hardboard.
After some hemming and hawing about exactly how I might finish off these pieces, I just bit the bullet, pulled out my foam rubble bin, and started slinging glue around. These pictures show the finished product, which hit the battlefield in last week's In The Emperor's Name session. I've included a couple of figures for scale: a wasteland raider and a sniper lying in the rubble. 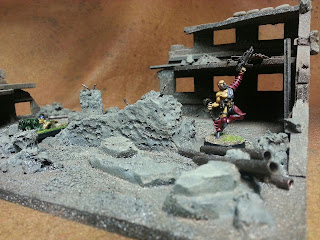 I mostly used expanded polystyrene chunks (bead foam, the kind that is made up of little balls) as well as blue foam insulation. The chunks were glued on haphazardly to create a rubble zone in the center of the terrain piece, with the walls still standing on either side. I glued everything in place, then threw in a bunch of spare bits: drinking straws for pipes, coffee stirrers for metal beams, wooden craft sticks for broken floorboards, etc. I added little bits of wire poking out of the foam chunks as concrete rebar. 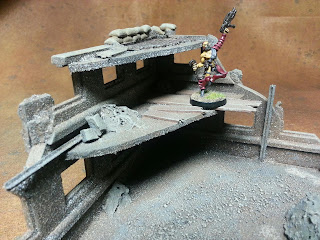 After affixing all the decorative bits, I slathered the whole thing in a thick coat of blue-gray house paint. My goal was to seal the foam chunks so spray paint wouldn't melt them. The house paint created a nice unified surface, but alas I must not have done enough coats, because some of the foam chunks still melted a little bit during the spray paint stage. I was initially dismayed, but the foam didn't melt away into a puddle of goo...they just shrank a bit, and the effect was pretty cool. Crisis averted! 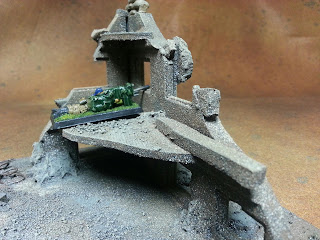 On to the
painting! I sprinkled on some gravel and ballast to break up the smooth
areas of the ground floor, then sprayed the whole thing black. After
that I sprayed a few targeted blasts of brown, followed by a rough
textured gray spray that unified the whole thing.
Once
this was dry, I used a big brush to splatter on a rough coat of brown
wash, then drybrushed with a light tan to pick up the highlights. The
final step was to add some patches of dead grass flock to the ruin. I guess I could have gone crazy with detailing, but I was more interested in making this piece quick and simple.
Here are a few more pics of this piece in last week's game. When these photos were taken, I hadn't yet completed all the steps described above, but the terrain still looks pretty cool. Pictured are Karl's Squats and Tom's Necrons.

Remember, the auction lot included two buildings. The second is currently a work in progress. It's about half the size of this piece, though, so I anticipate having it done in a week or so. Check back for more pics of the second piece!
-- Patrick, Chicago Skirmish Wargames club member

3 responses to “Terrain: From the Auction Bench to the Battlefield”