From the workbench: Converted plastic mechs

A number of months ago I sat down one evening and hacked out a bunch of conversions of the inexpensive plastic mechs sold by EM-4 Miniatures, and this week I finally got around to photographing them. These are by no means finished, but I thought I'd share some of the possibilities hidden in these 20-year-old miniatures.

Formerly packaged and marketed as "Steel Warriors" and distributed by several other companies, these remain some of the most affordable figures that are near the the Battletech scale (1/300 or 1/285). The 5-figure box sells for about $4 on the EM-4 website.

For a review of them, check out this article from Reviewing Wargames, from which I've borrowed a couple of photos. Each box contains sprues with parts to build 5 mechs using 3 basic chassis (small, large, and chicken walker) and a variety of arms. Bases are also included.

Nice enough, but there's even more potential there. Here's what I came up with and how I got there.

Here's a shot of the "back" of the mech showing where I filed the cockpit away. I'll probably find some little greeble to glue on there, though it's not terribly bad looking.

I'm particularly fond of this one, as it is very reminicent of the classic Rifleman mech design from old school BattleTech.

Large Chicken Walker 1
This mech's torso is interesting because either end looks like it could be the cockpit. 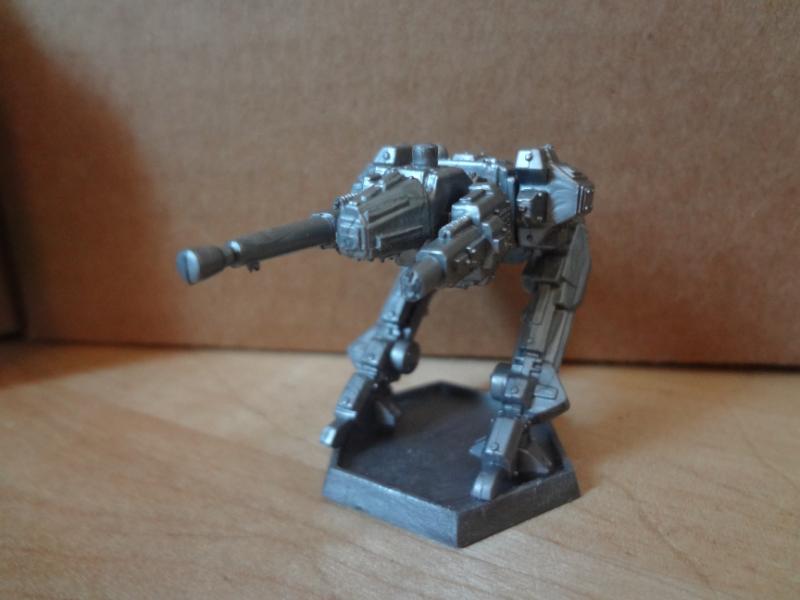 Though the mechs come with either 25mm round or hex bases, I prefer the look of the battletech-style lipped 30mm hex bases. These are also available from EM-4 for the ridiculously low price of £1 GBP for 10 bases. The larger size is nice, and the lipped edge makes your basing/ballast/flock look very tidy. The mechs have little pegs in their feet, and it's easy to carve or drill an appropriately sized hole in the base. Just keep the feet elevated a bit so they will rest nicely on your basing material. Here's a view seen from the bottom of the base.

These miniatures were easy to cut, file and assemble. The plastic is a bit harder than regular polystyrene, but it glues just fine with superglue or my favorite plastic cement (Plastruct Plastic Weld). Even though I don't play BattleTech, I had such a good time with these, that I'll probably come back and convert another batch.

Maybe someday they'll even be painted!

6 responses to “From the workbench: Converted plastic mechs”