Song of Blades & Heroes holds a special place in the heart of many Chicago Skirmish Wargames members. It was the game that brought us together way back in 2010, and since then we've become experienced (some might say veteran) SBH players.

So you can imagine how excited we were to read about Of Gods & Mortals, written by Andrea Sfiligoi and released last year by Osprey. The game might be best described as large-scale skirmish featuring gods, mortals and legends drawn from history and mythology clashing on the battlefield. Based on our reading of the rulebook, OGAM games are quite a bit larger than the typical SBH game, with maybe 20-25 figures per side in OGAM compared to 6-12 figures for SBH.

Both games share the same basic rules engine, which means we already knew 75% of the rules before we even opened the rulebook. We've been looking for a good framework for doing large-scale SBH games, so Tim and I carved out some table space at last week's club night to try out OGAM.

Here are my guys, led by Hesperax, the undead dragon.

And here are Tim's guys, led by his undead giant along with a werewolf and Celtic chariot.

We decided to play the "Sacred Grove" scenario, in which both sides fight to control an enchanted copse of trees in the center of the table. Here's the battlefield at the start of our game. 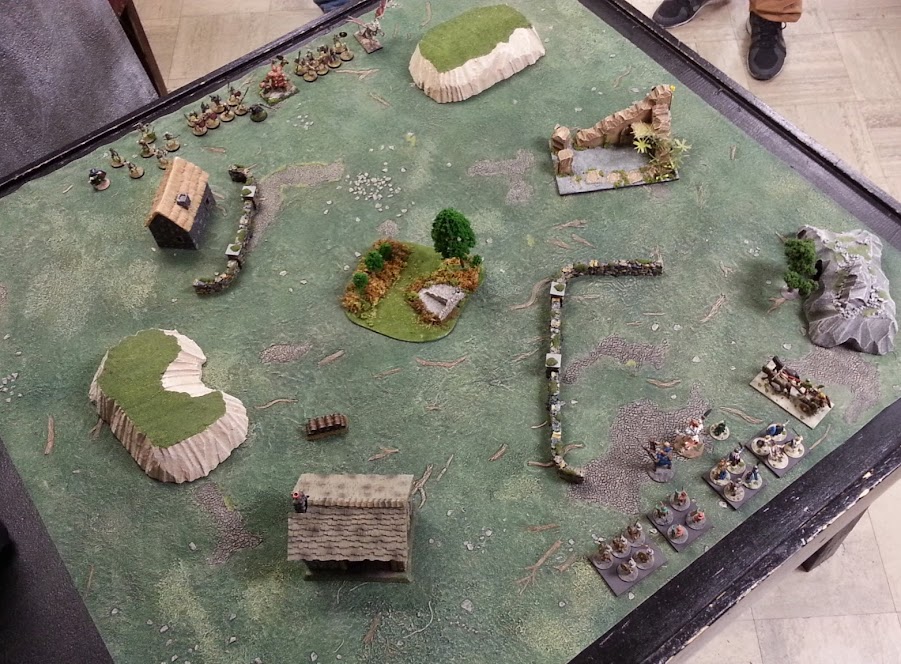 We deployed our guys in a rough arc around the sacred grove. In the base rules for OGAM, units can deploy anywhere on the battlefield as long as they're a minimum distance away from any other enemy unit. That's fairly cool! No more lining up on the table edge and spending the first three turns moving forward!

Tim took the first turn and advanced his undead giant, chariot and a squad of skeleton warriors toward the sacred grove.

I did the same on my side of the table, taking care to keep Hesperax (my leader) near her troops for support.

OGAM has three different unit types: gods, legends and mortals. Mortals move around the battlefield in formations, and the game has just enough crunch in this respect to satisfy gamers who might be familiar with ranked unit movement from games like Warhammer Fantasy or Kings of War. But units are capped at 8 figures, so you won't find yourself struggling with ungainly blocks of individual troops.

Legends are basically heroes or champions with better stats and a few special rules. They can roam around the battlefield, and they stand a decent chance of threatening a small unit of mortals.

Here, Tim's werewolf encounters my lich lord on a flanking maneuver. Both are legends and both will shortly be joined by their comrades as the battle develops.

Closer to the sacred grove, my unit of skeleton archers had invested a ruined building and were taking potshots on Tim's advancing guys. As in SBH, shooting is not all that effective unless you really dedicate some points to it. My archers didn't do a whole lot in this game.

Here's another look at the scene above. You can see I've got an 8-man unit of skeletons moving into contact with Tim's undead guys. In the second pic below, he's bringing another smaller unit up around the rear of my skeletons.

We ran into an interesting rules situation at this point. In OGAM, a unit that loses a combat always recoils away from the opposing unit -- but it doesn't always suffer casualties. In the photo above, my skeleton unit in the center got pinched between Tim's two mortal units and basically bounced back and forth for several turns like a pinball, constantly recoiling into another enemy unit, losing 1 figure at a time but never quite falling apart.

Eventually Tim destroyed the unit but he had to commit two units of mortals and his undead giant. It was a real grindfest and we were wondering if we were playing the combat correctly. We kept flipping through the rulebook looking for a rule about how units that recoil into larger enemy units are automatically destroyed, but such a rule didn't exist, so we just kept playing out the combat in little spurts each turn.

On the other flank, the battle between the werewolf and lich lord was heating up. Tim committed another unit of mortals and I brought up my undead abomination to support the lich.

We smashed on each other for a few turns, but ultimately the lich lord prevailed, slaughtering the mortals and prompting the werewolf to fall back toward the sacred grove.

Oh yeah! About that sacred grove. I didn't take very many photos of it, but the grove saw some fierce fighting. Tim seized it early in the game with his chariot, but then I moved up a unit of 8 skeletons, destroyed the chariot, and promptly seized the sacred grove for myself. Here they are, taking up defensive positions as Tim pivots his troops to focus on the objective. 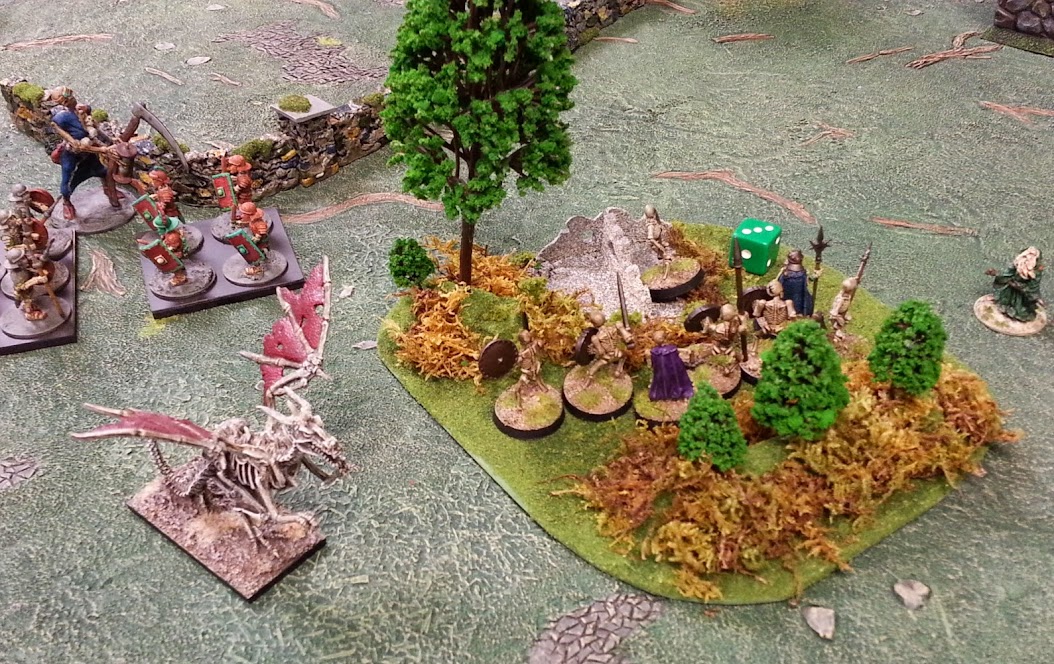 In the end, Tim couldn't quite seize the objective before the end of the game (it was capped at six turns). So although I definitely lost on the battlefield, I was able to hold onto the scenario objective and score a victory.

We hashed out some thoughts on OGAM after the game. Short version: Tim and I both enjoyed it and feel it could be a great "next step" for our club. We've been looking at slightly larger games for a while now, and OGAM offers that while still maintaining a lot of the skirmish aspect that we like about SBH.

The combat rules have been cleaned up a lot compared to SBH. Almost all of the combat modifiers are bonuses, rather than penalties, which makes them a bit easier to track. Units still have only two stats, just like in SBH, plus a few special rules which will look familiar to any SBH player.

One minor quibble has to do with some of the combat math. Outnumbering counts every factor of 4 when determining bonuses, but casualties count every factor of 3. It seems like it wouldn't have been too hard to bring these two areas into harmony so that you could say something like "This game uses the rule of 4s...." which is quite elegant. But again, Tim and I had no real problems handling the separate rule elements.

The flavor of OGAM (gods and mortals clashing on a battlefield) doesn't resonate particularly well with me, so I don't see myself playing out the games described in the rulebook (Heracles + Greeks vs. Anubis + Egyptians). But it's perfectly serviceable for more typical fantasy games, which is how I expect we'll end up using it. Really, I see OGAM as more of a "stopgap" solution until the official large-scale SBH game (Song of Armies & Hordes I think?) is released, hopefully in the next 18 months or so.

The verdict: OGAM is a great game for our club! We've got quite a nice collection of fantasy miniatures now, and this game gives us a chance to get them all on the table using our favorite rules engine. I look forward to introducing everyone to OGAM in the future. Stay tuned!