Oxiddon Alpha: A Troubled World on the Galactic Frontier

Nearly a century ago, Terran survey teams declared Oxiddon Alpha -- the lone planet in the Oxiddon system -- uninhabitable and unfit for human settlement. A marker satellite was placed in orbit, the survey details were recorded in the archives, and the teams moved on. Nonetheless, the discovery of massive mineral deposits 57 years later led to the Maersk-Tesla corporation's successful bid to be the lead agency for resource development. In exchange for a 60-year renewable contract for exclusive mineral extraction rights, the conglomerate corporation was tasked with terraforming of the planet for later human colonization.

Eager to exploit this new source of material, Maersk-Tesla hastily agreed -- though terraforming would prove to be low on the corporation's agenda. Thus, they were only too happy to let University of Noonien Professor Xian Peterson use the planet as a testbed for his own experimental techniques.

The terraforming of Oxiddon Alpha would take 45 years, and Xian would pass away before seeing the results of his labor, but in the meantime the colonization would far outpace the speed of terraforming.

Mineral deposits on Oxiddon Alpha were greater than anyone had predicted, but the process of terraforming -- now watched with great interest by various politically connected educational institutions -- meant that the planet could not simply be strip-mined away or fracked into submission.

The mines themselves stretched for miles underground, with periodic above-ground facilities to extract and process the mineral wealth. Growth brought manufacturing to Oxiddon Alpha. Mining domes could not expand outward for fear of damaging the delicate terraforming process, so they expanded upward.

The Birth of the Bridge Cities

As a result of this growth, mining domes that averaged only two miles in diameter became towering cities reaching high into the sky. Fueled by a seemingly endless flow of credits and in the spirit of friendly competition, these cities were more than functional sealed towers of living. The "city managers" -- each wishing to be more awe inspiring than their neighbor -- commissioned the galaxy's finest architects to make the cities a marvel inside and out.

To connect these cities, great sealed bridges, often stretching dozens -- or in a few cases hundreds -- of miles long were constructed. And thus were born the Bridge Cities. Some areas of the planet, too remote to be connected by bridges, would remain small mining outposts, and other less mineral rich regions would remain undeveloped. On the resource rich continent of Sealand Major, it took human settlers built less than four decades to develop beautiful spires, towers and cityscapes across the landscape, all connected by immense carbon-fiber bridges.

The last of the Bridge Cities was completed a decade before the terraforming effort was finished. It was nearly two generations since landfall, and the Bridge Cities had developed without any real confidence that terraformation would be successful. These self-sufficient spires contained everything that a population would need and almost as much as they could want.

Before terraforming was complete, the bridge cities decided on a radical course of action. Within a decade, they knew, a massive influx of colonists would arrive on Oxiddon Alpha. To head off this potentially imbalancing threat, the Bridge Cities declared themselves the "independent and contiguous nation of Uberbrucken." Terran authorities quickly granted a charter and a new kind of nation was born on less than 800 square miles (not counting bridge supports) of actual land occupied by the Bridge Cities.

One Planet, Two Worlds
A decade after the completion of the last Bridge City, Oxiddon Alpha was reborn. Unblemished by pollution from the self-contained Bridge Cities, the planet was ripe for colonization, soon developing into a thriving breadbasket for the Galactic Frontier.

The colonists set about establishing their egalitarian settlements around the newly formed nation of Tenuta. Uberbrucken, on the other hand, kept to the more corporate and top-down methods that had served them well for decades. Though there were many opportunities for trade, Uberbrucken's governing board decided instead that a nearly complete embargo on contact with the settlers would best preserve their way of life.

And so, these two nations remained, both more geographically intertwined and yet more culturally separate than perhaps any two nations in human history.

The Bridger-Broadlander Wars
No side has been quite willing to take responsibility for the conflict known as the Bridger-Broadlander wars, but the results are well known. Some 85 years after terraforming wrapped up on Oxiddon Alpha, Uberbrucken and Tenuta existed peacefully, but with little contact besides the most minimal levels of diplomatic communication.

In the late planting cycle of 2406, the sleeping citizens in the Tentua settlement of Brinsk awoke to the sound of the ground beneath their feet splitting open. A minute later, the entire settlement was swallowed up in a giant man-made sinkhole, created by over-mining on the part of the Bridge City megacorporations. There were no survivors. 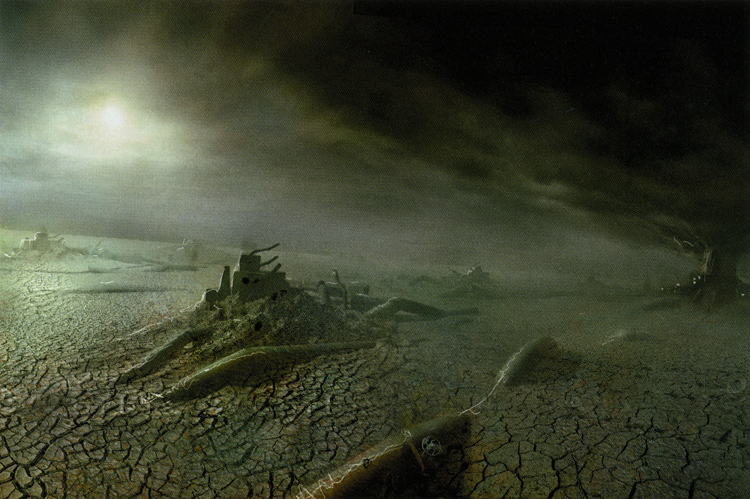 Outcry was swift and loud, but tempers were restrained as representatives of Uberbruken and Tenuta quickly entered into intensive discussions. An agreement regarding reparations had almost been reached when the second sinkhole collapsed part of the city of Hondon, which sits between the Bridge Cities of Parvassa and Inverness. Affecting only a small outlying neighborhood, it was not the tragedy that Brinsk was, but it set off alarm bells as leaders in both factions realized the continent could be riddled with potential sinkholes.

Indeed, secret documents showed that fully two-thirds of the populated areas of Sealand Major lived within a mile of a potential sinkhole, and several major Tenutan cities were located directly over such danger zones.

The Bridge Cities, of course, bore no such risk, located as they were far from the mining operations that sprawled across the planet.

One morning in 2406, an extremist Tenutan faction struck at the Bridge City of Uman. After gaining entry to the city, suicide bombers with tactical nuclear devices detonated themselves at key support structures throughout. Its structural integrity compromised, the miles-tall city commenced a slow-motion implosion and collapse over the course of several hours. Thousands died, and Uman's death throes dislodged the bridges tethering it to its sister cities.

The first Bridge City to fall would not be the last. Within days, Maersk-Tesla corporate marines were fighting pitched battles with Khiff mercenary brigades hired by the Tenutans and possibly funded by other corporations. The bloodshed increased as more Bridger cities fell...one, three, then dozens. Uberbruken retaliated by deliberately collapsing the underground mines beneath Tenutan military bases ... many of which were located near settlements and cities.

The conflict might have torn the planet apart, but Oxiddon Alpha was too important for Terran Authorities to abandon. After eight months of fighting and the loss of hundreds of thousands of lives, it took only Terran threats of sanctions against Maersk-Tesla to bring an immediate withdrawal of nearly all fighting forces.

In a Terran sponsored deal, Uberbruken paid for the relocation and resettlement for almost the entire non-Bridger population, as well as grants and low-interest financing for additional development. Maersk-Tesla also ceded the rights to mining on the other continents, though this was not seen as a notable penalty since it is Sealand Major where the richest resources were -- and still are -- located.

Since then, the new colonies elsewhere on Oxxidon Alpha have maintained a unified identity and government known as New Tenuta.

The Remnant
Despite the destruction of their entire society, and instability of a land where underground mining is now conducted with no concern for above-ground dwellers, a few Old Tenutans refused relocation. Known to themselves as "Broadlanders" or "The Remnant," they chose to stay.

Their lives are best described as pastoral, or even primitive. Uberbruken currently maintains a complete embargo on communication and transit on Sealand Major. The Broadlanders thus scavenge leftover equipment and technology from the war-torn former Tenutan settlements or collapsed Bridge Cities.

The Remnant inclues hardy settlers who have banded together to stake out land claims and work out their living on vast plots of still-virgin farmland, along with bands of marauders who pillage across the continent preying on the weak. Nomads scavenge the wastes and the fallen Bridge Cities and trade their finds all over Sealand Major.

All these groups live our their lives in the sometimes anarchic and often apocalyptic Broadlands. Despite the deprivation and constant possibilities of new sinkholes, it is a vibrant place with danger and opportunity present in equal measure.

As long as they stay in the Broadlands, Uberbruken takes little notice or responsibility for these peoples. They will not aid the needy, nor will they punish evil deeds so long as they occur out of view of Uberbruken citizens. It is essential that Uberbruken people not disturbed by the Broadlanders, so atrocities (or other potentially aggressive acts) committed within sight of a Bridge City will result in swift justice from an Uberbruken Enforcement Team.

The Gates
There is an exception to the odd sort of of paternal neglect that has risen up between the Uberbruken population and the Broadlanders. Every Bridge City has a clearly marked portal at its base. These "gates" are always open to any Broadlander -- in fact, the bridge cities will respond with surprising force to any attempt to block access to the Gates. It is perhaps the only truly shared and universal agreement of New Tenutan, Bridger and Broadlander law that any Broadlander has the right to enter a Bridge City.

Upon entrance, they will immediately receive full medical attention (if necessary) as well as interviews and possible interrogation. They will then be relocated to anywhere Tenutans have been resettled, usually being reunited with existing family if possible. A select are offered a place within the Maersk-Tesla Corporation. W

Wherever they end up however, it is an inflexible rule that once a Broadlander enters the gates, they leave the Broadlands forever.

It is commonplace for orphans and the very ill to make use of these portals, as they are often a literal gateway to a new life.

However criminals, and those with a price on their heads may also attempt to make use of the gates as well. If a refugee Broadlander with a criminal record enters a gate, he may be sentenced to a period of time in the Terran Penal Legions, or may be exiled forever into the windswept wastes, their gate privileges revoked forever. In this way, the Broadlands act as a sort of open-air prison for the planet's worst offenders.