The Beacon of Raggid Holf: A Song of Blades & Heroes Game Report

Last week the club met at our favorite friendly local game store, Games Plus. While Tim and Pat amused themselves with a game of Of Gods and Mortals, Karl, Mike, and I got to play an awesome game of Song of Blades & Heroes. We picked out the Silence the Watchtower scenario, converted from a Warhammer skirmish scenario by Hour11Gaming in their excellent supplement.

Karl, commanding his Night Herons of the Black Crown, was charged with defending the warning beacon in the ruined tower on Raggid Holf (the name of the central island, I’ve decided) against Mike’s Picked Men of the Wolves of Powys and my own demented Brigandry of Skeldkryk. After six turns the beacon would light, warning the Commandery of the secret order of the Night Herons of the incursion; if Mike and I succeeded in kicking down the door to the tower and extinguishing the beacon before it was fully lit, the Commandery would be ignorant of our invasion and the order would surely crumble! 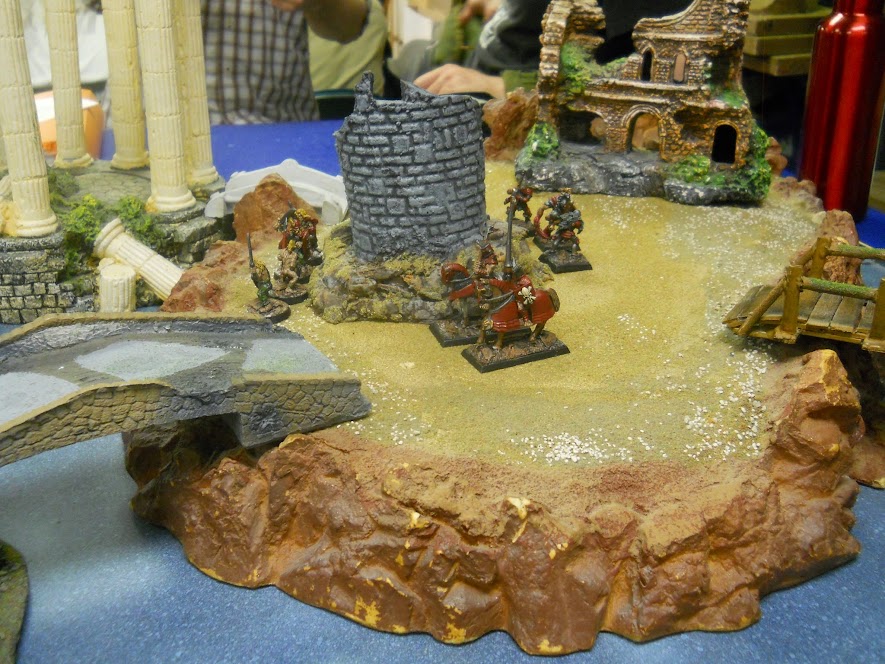 "Light it," croaked the Sergeant-Marshal. "The Grand Master must be informed that the Holf is threatened."

"In repayment of the gods," said his hulking lieutenant, and swiftly he disappeared into the tower. The Sergeant-Marshal could hear the tramping of the self-righteous heathens on the bridges to the South and the West. The outpost was hemmed in, surrounded by those who would throw down the idols of his order. They knew nothing of his fervor, nor of the debt that every living thing owed to the dark gods.

The Sergeant-Marshal was glad to send them back to their filthy corners of the world. At first he had scorned the lump of blasted rock, to defend which he had been summoned from his manor, and his jeweled chambers, and the maids who applied the balms to his twisted arm. But did he not owe all of those things to the favor of the dark gods? Indeed, he now knew he was fortunate to have the opportunity to repay his favor. With such thoughts, and in the light of battle, the Raggid Holf seemed almost sublime.

Yes, he thought. This will be a good place to show his devotion to the dark gods.

And, if necessary, this will be a good place to die for them.

The Sergeant-Marshal could afford to waste no time. The picked men had already advanced in dense formation halfway across the mangrove bridge, with shields locked. At the head of the column came a fierce figure clad in a red robe. He chanted and struck his shield with his sword; and the picked men around him chanted in return, and rattled their spears.

The Sergeant commanded his men forward to the southern bridge to arrest the advance of the Wolves of Powys, with his Beastblood riders in the van to break the wall of shields. He sent the so-called half-elves, the stillborn tribesmen, to hold the western bridge against the collection of brigandry that remained strangely quiescent, standing in close order beneath their banner, which was bedecked in dripping eyes.

The forces met at the landing of the southern bridge in an unmoving line, with each side striving to push the other bodily back. Unable to move, soldiers were forced onto the points of spears amid the press, and their bodies pushed over the rails and into the sump below.

The red-robed Champion made sure that many knaves would pray to their dark gods no more. But in the thick of the foot of the bridge he met a fearsome warrior with crested helm. The knight’s studded maul shattered Gawain’s shield and his arm with it, and he collapsed in the crush of bodies and was overcome.

"On! Foward!" cried Derfel over the din. "Be not cowardly and run in fear, for we are the Wolves of Powys and lest we darken the name of the fair lady of that place, we shall stand!"

"But lord," said the slinger at Derfel’s shoulder. "Gawain, the lady’s champion… he has fallen. He who they said could not be slain..." The boy’s eyes were trembling. Derfel perceived that he was lost in a cloud of fear.

The boy did as he was told, and Derfel carried on shouting whatever he could think to keep his men fighting on. What they will NOT sing, Derfel thought to himself, is that the Wolves of Powys turned and ran because a foolish boy lost his stomach!

On the Western bridge, the stillborn sounded their shrill death-cries and threw themselves forward, intending to smash their way through their adversaries and break them before they could even gain the bridge. But even as their axes started to fall, the flag bearer swung the staring gonfanon in a signal and the ranks opened. Mottle-skinned, be-taloned creatures leapt upon the unfortunate warriors and tore them to pieces. Then emerged a giant of a man bearing a maul the size of a tree who strode forth and grunted his challenge to the captain of the half elves and beat him back along the bridge.

"Would that all days could be blessed with rains such as these," said Aelfnir the Deranged to the Shivering King as he brought his bearded ax to rest at last. His plumed helm was bespeckled with tiny drops of blood, like lazy insects. The senseless yammering of Brittlegast the cut-pate drifted back from further along the bridge, along with the rhythmic sound of his cleaving.

A shallow whisper issued from behind the Shivering King’s visor: "I have dreamed..."

The strange cavalier pointed his sword to Raggid Holf, pointed at a figure near the far bridge whose arm appeared - at least to Aelfnir - to end in a large claw. But then Aelfnir had often been told that his perception was... askew.

"Huh," mused Aelfnir. "At first I thought he wasn’t listening...but it looks as though the King is as excited about the rain as I am!"

The Sergeant-Marshal could see that his hold on the Holf was failing. The western bridge had fallen and the southern hung by a fingernail.

He looked to the tower in desperation. Was it a curl of smoke he could see issuing from the top? There came a shout from the remaining picked men on the bridge. Many had fled, but Derfel had rallied the rest and they were pressing forward once more.

So, after bidding the half-elf captain to guard the tower with his life, he sprang into the combat at the foot of the bridge, battering back the tide and rending spear and shield in his claw. As in a mist, he perceived the face of the leader of his foes... and he reached for it. His claw tightened around Derfel’s neck and sword arm, which was prying bloodily at the pincer, but to no use. Derfel fell at the foot of the bridge. Twice.

So taken was the Sergeant in the euphoria of battle that he did not hear the echoing screech of the Shivering King until he was already upon him. He struck in vain at the guilded cuirass, but felt the Cavalier’s searing blade cut deep into his throat. The Sergeant-Marshal fell and the outpost guard withdrew to the base of the tower - dismayed, yet determined to continue fighting.

The Slavering Banditry pressed the attack, supported by the dogged remainder of the Wolves of Powys; but even as the entire outpost seemed doomed to butchery on Raggid Holf, the impossible happened…

The Sergeant-Marshal tried to compose his breathing while he gathered his silken tunic in his left hand to staunch the flow of blood from his neck. At length he found himself exhausted, and so instead he rolled onto his back and prepared to meet the gods. But as he did so he was met with the wonder of fire, for the beacon had taken and was ablaze.

He heard his Lieutenant bellow from the top of the tower: “It is lit and the Grand Master shall know! Long live the Night Herons! Long live the Black Crown!

...And with his dying eyes, the Sergeant-Marshal saw smoke billowing into the sky, as black as the hair of the maids of his manor…indeed, he thought, as black as the favor of the dark gods.

One response to “The Beacon of Raggid Holf: A Song of Blades & Heroes Game Report”