Last week we kicked off our summer Song of Blades & Heroes campaign. As before, this takes place in the lands of Qaarra, though we've advanced the narrative to create a palpable sense of doom and gloom over the lands. Here's the roster of participants so far.

Before each battle, players rolled on a chart below to determine the location and the scenario played. Players also had the option to choose their own scenario and location. We're really trying to avoid the classic "kill-em-all" default scenario with this campaign.

A few battle reports might be forthcoming, but for now, here's a summary of the night's events:

The Scourge of Longrieve made their campaign debut in a custom scenario that pitted the raiders against a disorganized but numerically superior group of orcs.

The scenario deployment required both warbands to deploy their figures relatively far apart, which made it difficult for either side to muster effective assaults. 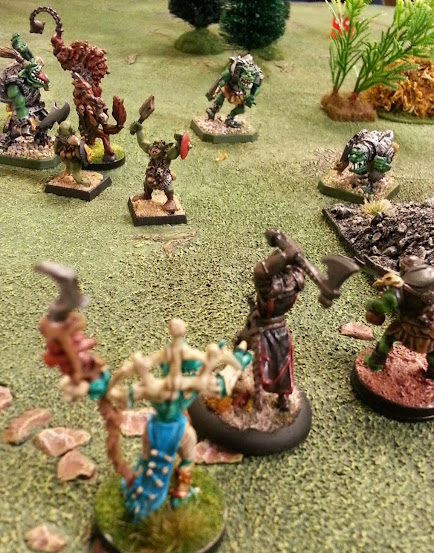 After a grueling early game, the dark warriors of Longrieve overwhelmed the orcs and marched off into the wilderness.
Victory: The Scourge of Longrieve (Pat)

The Druids were attempting to complete a ritual deep in the dense, tangled woodlands of Vitu Daru. The Tharks, of course, would have none of that!

Ultimately, though, the druids drove off the Tharks. Though defeated, the Tharks, still managed to find a hoard of 25 gold after the battle, and the Druids reclaimed an ancient watchtower on the border of their lands.
Victory: Wild Druids of Vitu Daru

Tharks of the Wyl'st Horde vs. The Deep Woods Vengers 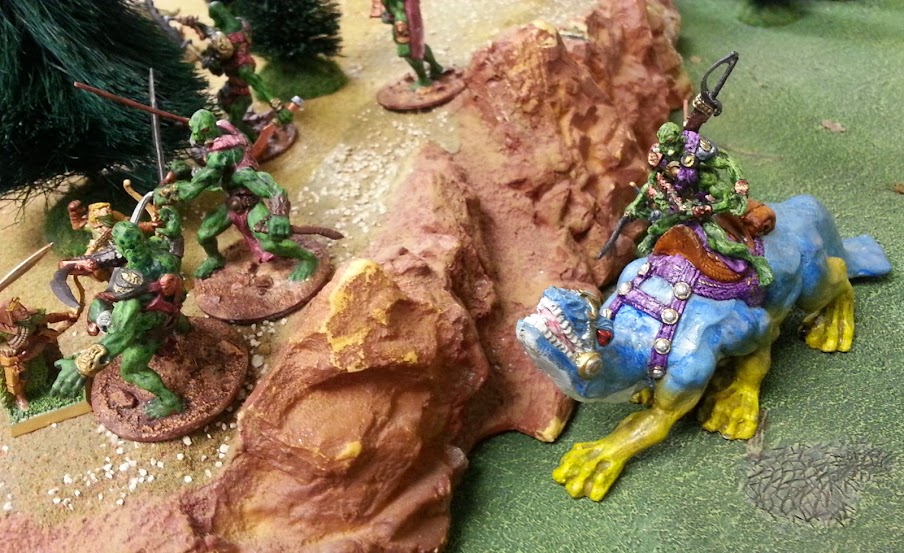 Location: Brionbock Dale
Scenario: Take the High Ground
The Tharks swiftly sent a large portion of their force up onto the hill, while below Karl's Wood Elves struggled to ascend. After having two of their number slaughtered by the Tharks, the Elves fled in shame. 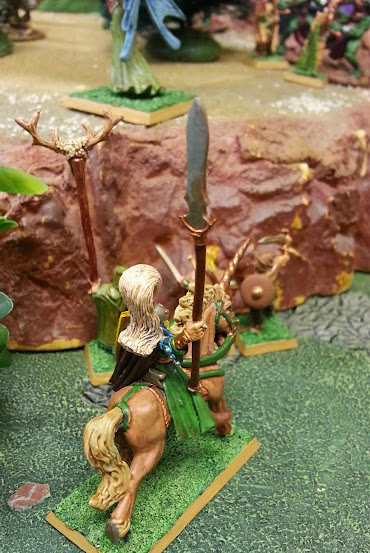 After the fighting, the Tharks discovered a corpse with 15 gold pieces. The wily Elves came across a caravan and shrewdly bargained their way into 20 gold.
Victory: Tharks of the Wyl'st Horde (Tim)

Deep Woods Vengers vs. The Unnamed Orcs
Location: The Scrying Stones
Scenario: Defend the Find
The Deep Woods Vengers were ranging though the Scrying Stones when they came across the Unnamed Orcs setting up camp in one of the abandoned Scrying Temples. Both sides quickly girded for battle. Karl's flying elvish queen was responsible for two gruesome kills -- including a hero, who luckily recovered after the battle -- that broke the orcs before they were able to concentrate their forces. After the battle, the fleeing orc force became lost, and the Elves discovered a magic well in the scrying stones in which they found a charmstone.
Victory: Deep Woods Vengers (Karl)

The Scourge of Longrieve vs. the Tainted Thegn's Dire Men

Scenario: Song of the Ancients (modified)
Location:  Tallenwood Forest
Pat's raiders were attempting to protect a necromancer while he conducted a ritual atop a heathen altar. The battle quickly went against Mattias's dire horsemen, and he wisely quit the field on turn 2 to avoid any further casualties.

Luckily, both of his wounded horsemen returned to the warband. After the battle, the Dire Men met with more misfortune as they came across a trap, which dazed one member of the warband. The Scourge of Longrieve, on the other hand, had a stroke of good luck, stumbling into a haunted forest and recruiting a ghoul to join their warband.
Victory: The Scourge of Longrieve (Pat)

Tharks of the Wyl'st Horde vs. Unnamed Orcs

Location: Sunderstone Badlands
Scenario: Defend the Watchtower
Still on a rampage of conquest, the Tharks attacked a watchtower controlled by the Unnamed Orcs. The Unnamed improved their standing by routing the Tharks off the table. The Unnamed Orcs found yet another watchtower in the wilderlands after the battle. Yep, sometimes that random exploration chart is a fickle mistress. The Tharks found a keg of beer with which to celebrate their battle prowess.
Victory: Tharks

We're off to a great start with lots of flavorful war bands and a great bunch of players. Stay tuned for a summer of chaos and adventure in the Qaarra!