Welcome back for the report of our third campaign session! Last week's games featured a few guest warbands, as Devin (an occasional player who we haven't seen in some
time) stopped by, and Josh and Pat both brought out new warbands for
custom scenarios.

Deep Woods Vengers vs. Tharks of the Wyl'st Horde
Location: Brionbock Dale
Scenario: We Came for the Honey, We Stayed for the Cave Bear 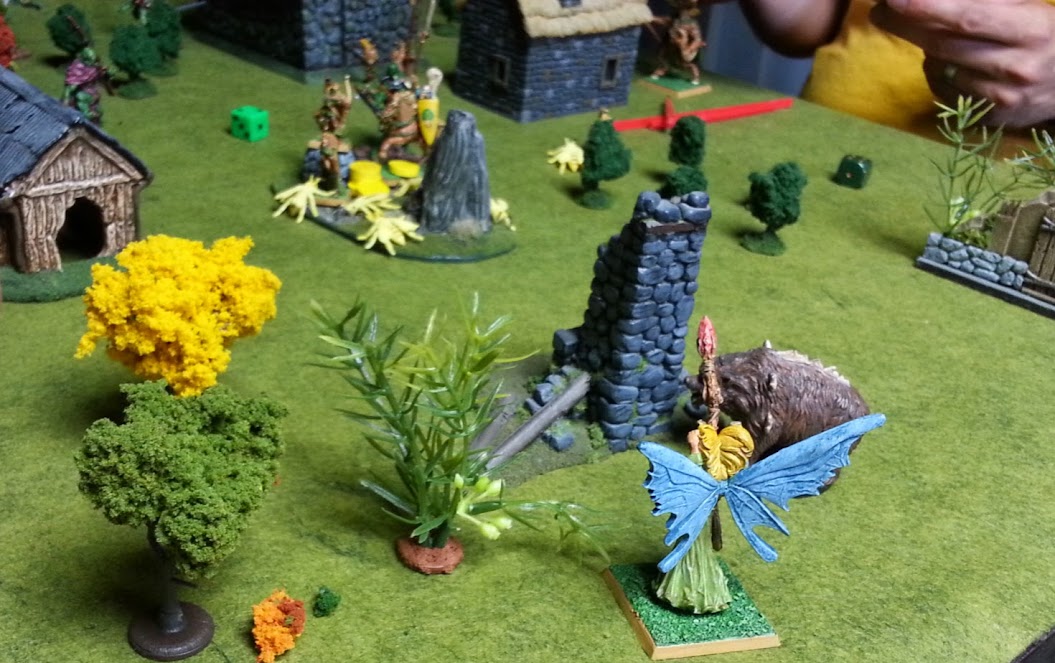 This scenario is part of the forthcoming Band of Gnomes supplement. Tim's Tharks
and Karl's Elves battled
over a trove of rare honey guarded by a bear deep in the wooded dale. It was a hard fought
battle in which the elves managed to steal the honey and
slay the mighty cave bear. However, unsurprisingly the Tharks were
brutal in their combat prowess and slaughtered enough of the elves to secure a
draw.

In the scenario, players score points for securing batches of
honey, slaying the cave bear and killing their enemies. It had an
interesting mechanic for bees to be riled out of the hive and attack the
thieves. We were able to identify a few areas where the scenario still needed some work, but overall it was very enjoyable.

After the battle, the Tharks passed through the remains of a haunted fortress, but found it empty. The Elves came across
an evil dark unicorn, but it quickly fled, recognizing their good natures and wanting nothing to do with them. Tim and Karl tied in this game.

Devin played the Defenders of Sunken Fort, a group of lawful knights and footmen who had stumbled across the Sunken Fort while exploring the Moaning Marsh. As night fell, the defenders learned all too well how the marsh got its name, as rotting, shambling undead warriors stumbled out of the gloom to assault the fort! 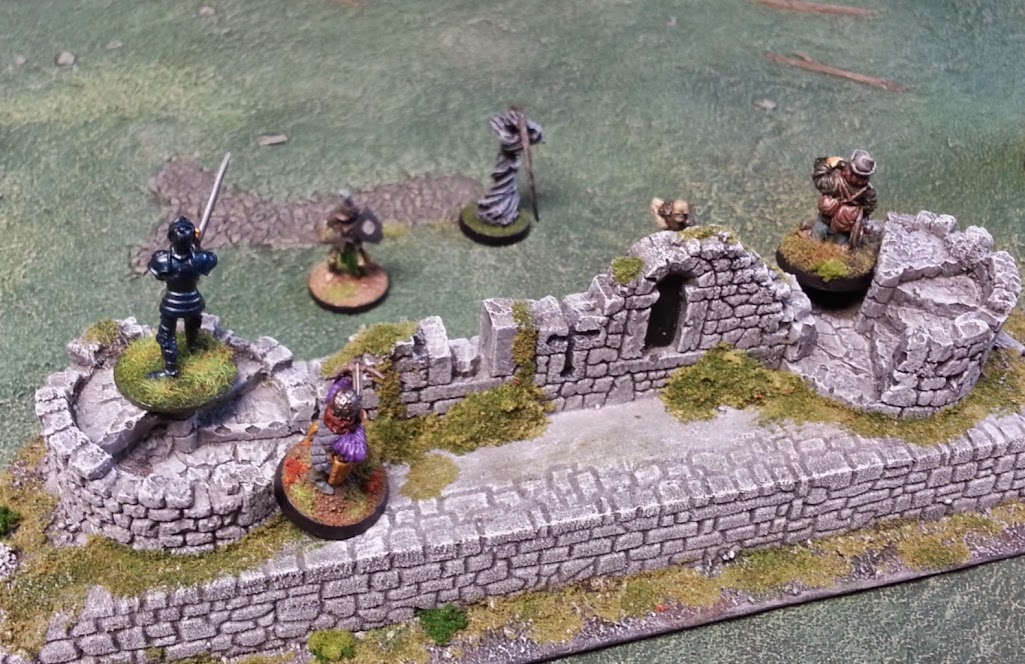 After several tense turns, Devin seized the initiative and turned the tide against the ghoulish marauders. This was a fun game and a nice opportunity to try out a batch of new terrain that Pat had recently completed. 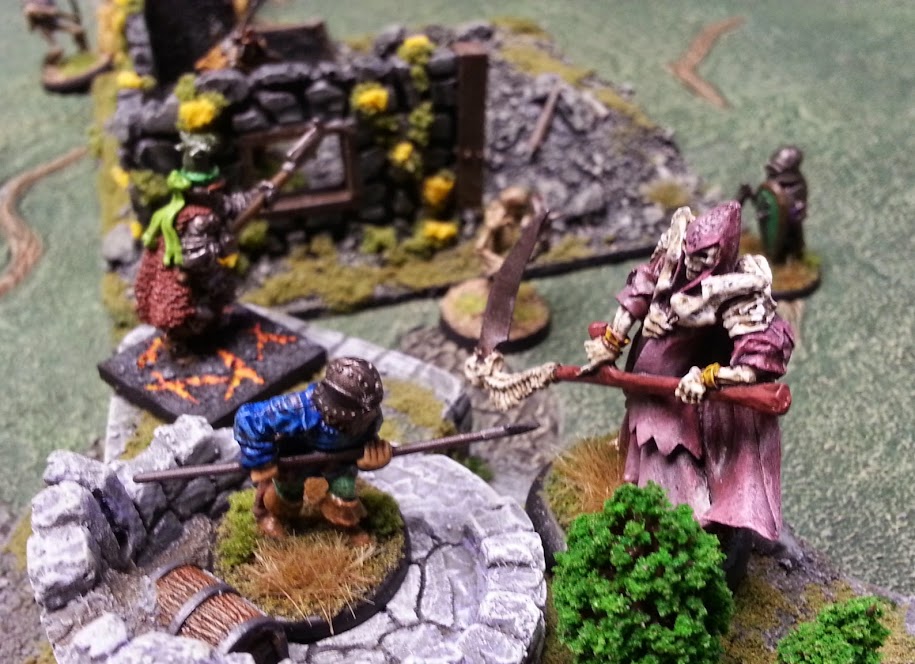 In the first of two scenarios featuring Josh's Royal Assassination Squad, he made short work of the Tainted Thegn's Dire Men.
The mechanical monstrosities (dispatched on assignment from the city council of Vildeburg) were tasked with defeating Ditherprank, a powerful* wizard in the employ of the Dire Men.

After a brief, savage battle, the Dire Men were unable to overcome the hulking automatons of
the Assassination Squad and so quit the field. Josh won, and after the battle Mattias's forces came across an abandoned watchtower which they claimed.


Garrison of the Sunken Fort vs. Deep Woods Vengers
Location: Brionbock Dale
Scenario: We Came for the Honey, We Stayed for the Cave Bear

After departing the Sunken Fort, the knightly garrison attempted to foil the Elves' second
gathering of honey. However, the wily elves had learned from their last
encounter. The garrison managed to get 3 of the 5 honey batches, but
the elves rampaged through their ranks to claim the victory. Following
the battle, the garrison's bad luck continued as
they became lost in the wilderness. The Elves came across an adventurer's ghost, but
couldn't persuade him to give up any treasure. Karl defeated Devin in this scenario.

Tainted Thegn and His Dire Men vs. Undead Marauders
Location: The Moaning Marsh
Scenario: The Sunken Fort (a custom scenario)

The Tainted Thegn and His Dire Men came across the Sunken Fort, which had recently been the scene o fa fierce battle earlier in the evening. Mattias's warband was very well positioned in this battle, since they were all mounted cavalry figures and could trot to and fro on the battlefield in response to the undead incursion.

Mattias routed the raiders, then his warband found a stash of gold in a nearby graveyard.

Royal Assassination Squad vs. Tharks of the Wyl'st Horde
Location: Agamin Boneyard
Scenario: Assassination
The
Royal Assasination Squad tested their mettle against the battle-hardened Tharks in another assassination scenario. However, the Tharks turned the tables and managed to kill the leader of the assassination squad, causing the mechanical monstrosities to flee
the battle. Following the battle, the Tharks discovered an abandoned graveyard, but it held nothing of value. Tim defeated Josh in this scenario.

So
far, the campaign is progressing nicely. Each player has been able to play about two games per session, which means those who
have attended every night have at least six games under their belts, and their
warbands are quite advanced. The club seems to be enjoying the
scenarios, and plenty of players have invented their own custom scenarios.

For those keeping score at home, here are the campaign records as they stand after session 3.

Next week we'll take a break and do some post-apocalyptic gaming (another CSW passion for sure), but will be back soon with
the second half of the campaign.