Last fall, when several club members were gleefully pawing through the treasure trove of Reaper Bones figures from their first Kickstarter campaign, I was twiddling my thumbs in anticipation, hoping for a chance to trade or buy a few choice figures from various club members. I got my chance when Jon hooked me up with Nethyrmaul the Undying, a colossal undead dragon. Here he is in unpainted PVC.

I've got a fairly large undead army at this point, so Nethyrmaul will make for a gloriously gruesome centerpiece if I ever get it on the field at the same time (maybe for a Kings of War mega-game?).

This figure was by far the largest individual miniature (can I even use that word? This thing is bigger than a Barbie doll!) that I've ever assembled and painted. As with many multi-part kits from the Bones line, the various pieces didn't quite line up perfectly, so I had to do some trimming, sanding and clamping during assembly.

Once I primed it with gesso, I was suddenly paralyzed with indecision -- confronted with a blank canvas, how would I decide on a neat-o paint scheme to truly leave my mark on this epic miniature? I finally opted for deep green scales drybrushed up through yellow and white, alongside mottled purple and magenta for the exposed rotting fleshy bits. The figure had a pretty impressive integral base, so I glued the whole thing onto a CD and added gravel, wood bark chips, flocking and grass tufts to finish off the base. Here's a look at the finished product. 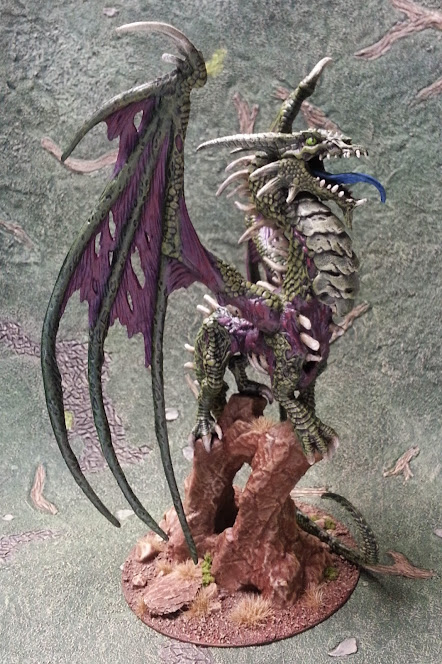 Visually speaking, Nethyrmaul is going to absolutely dominate the battlefield whenever he shows up. Now I've just go to convince the club to play some more Kings of War, and soon!

4 responses to “Painting Nethyrmaul, the Undying”