After a summer spent playing out our Quake & Mourn campaign -- more than a dozen Song of Blades & Heroes games played out over five sessions -- we geared up for one final, epic finale earlier this month. Our chosen venue was The Gaming Goat in Oak Park, IL, and they graciously provided plenty of table space on a busy Thursday night.

We pulled out all the stops for this game and hauled much of our best terrain to the Gaming Goat. Karl set up a visually gorgeous scenario set in Vildeburg, the main city in our campaign world. A city wall split the table down the middle and provided space for two side-by-side games, with Karl and Ian (a new player who was joining us for his first game) controlled a city militia faction defending the walls. These defenders played a role in both games. Here's the battlefield:

Though a little less experienced than the most battle-hardened
campaign warbands, Pat's and Josh's forces nonetheless got down to
business as the campaign finale. Both warbands deployed in the mercantile district of Vildeburg,
with its towering guild houses and cobbled streets. 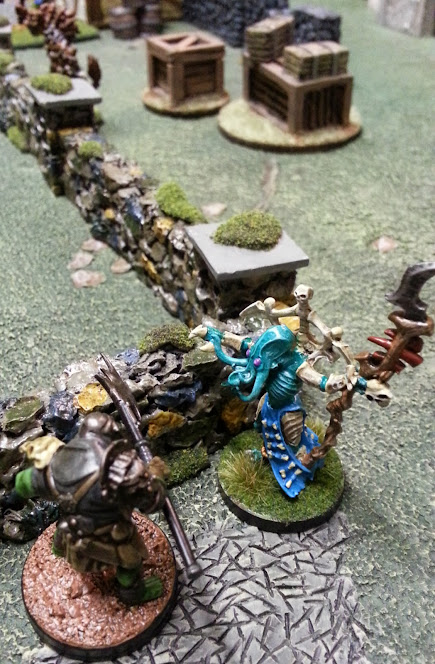 Across the
battlefield were the objectives: two oak-and-steel doors guarded by the
very best militia that money could buy. These stalwart fighters were
commanded by Ian, who brought his gorgeously painted
Warhammer Empire figures to the table as town guards. They occupied
Vildeburg's walls and towers as the game began, but they moved down to
the street level as the game progressed.

As Josh and Pat
sent their warbands racing through the neighborhoods toward the castle
gates, Karl sprang his trap! The grim undead legions that had been
creeping north over the course of the campaign had finally breached the
city walls of Vildeburg! These vassals were the advance force of Lord
Kalessin's host, which had been moving slowly up out of the southern
deserts over the course of the campaign. The skeletons now poured into
the streets as the warbands fought their way through the city.

Josh
and I avoided any big fights until we reached the base of the city
walls, where Ian's stout brigade of city militia stood shoulder to
shoulder, armor gleaming in the flickering firelight of the ravaged
city. A huge fight developed as the three warbands crashed into each
other. 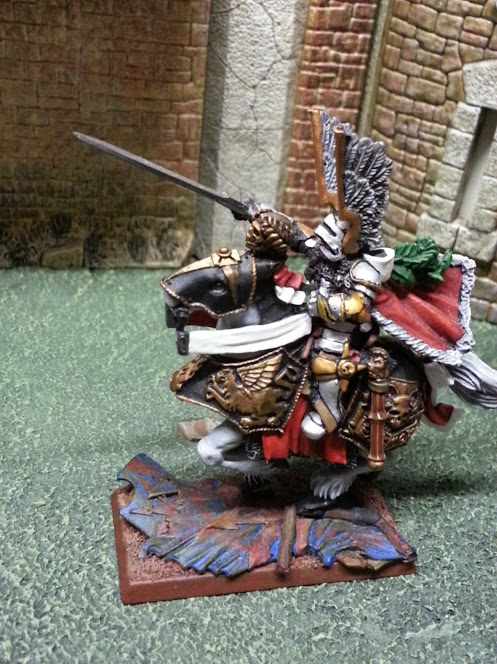 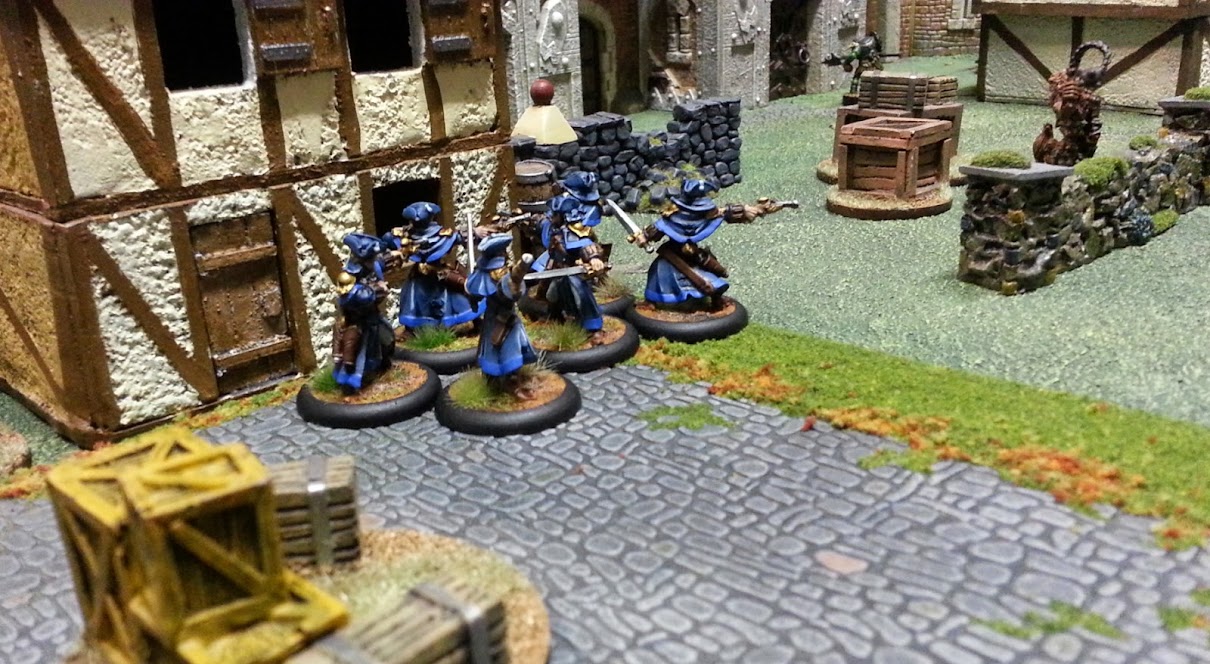 Behind us, the undead continued their implacable advance,
gobbling up Josh's warband in a tide of rusted steel.

In the end, only Volstag, Horseman of the Wastes, managed to escape through the castle gate...

Across the table, the Tharks and the Dire Men rode on the Citadel of Vildeburg in haste. Fulgid Glim's wild cavalry -- unused
to fighting in the closed spaces of the capital city slums and whose
horses were easily frighted by the discharge of musketry -- met stiff
resistance from the street fighters of the City Watch.

The
City Watch was no match, however, for the efficiency of the Thark's
advance. The creatures from beyond quickly seized command of the slum's
square and stockyard. While their vicious mounts tore the Knights
Protectorate to shreds, the warriors dispatched their adversaries with
an eerie serenity.

In the end, the Thark's
command gained the tower with ease while their comrades turned to face
the implacable undead  for the good of the collective. The Tainted Thegn
and his remaining captains on the other hand, readied to make a
desperate attempt to escape the cursed city, and to leave the land of
Qaarra that had claimed so much from them.

As the defenders turned to face the relentless undead horde, a precious few had scaled the heights of the tower parapets and now prepared for a duel to the death high atop the chaos in the streets below. Tim's Tharks clashed with Pat's chaos horseman (allied with Mattias's sneaky wyrdwolders) in a brief, bloody skirmish, before the green-skinned aliens brought down the wrathful chaos warriors.

Tim's Tharks had won the battle, but faced with a tide of skittering undead warriors in the streets below, it seems all but certain that they have lost the war!
And thus ended Quake & Mourn, our third fantasy campaign! For those keeping track at home, here are the final win/loss/tie tallies.

As you can see, Tim was the big winner with the most games played at the most victories. He was one of only two players with an actual winning record (the other being Josh). You can re-read all the session reports (as well as background on the game world) right here.We'll certainly continue to play Song of Blades & Heroes here and there through the long Chicago winter, and you can expect another full-fledged campaign come next spring and summer.