While digging through my bits boxes recently, I found myself staring at a bag full of windows and window frames leftover from a Walthers building I built years ago.

I suddenly realized that by clipping out the bottoms of the frames and gluing them to the windows in reverse, I could make pallets. But what could I put on my pallets? I started pulling out crates, barrels and miscellaneous sci-fi freight items to put on the pallets -- I'll admit I got a bit carried away and had to stop building terrain, or else I'd never get around to painting this stuff. The result was this box of 30-plus scatter terrain pieces, perfect for sci-fi or post-apocalpytic skirmish gaming 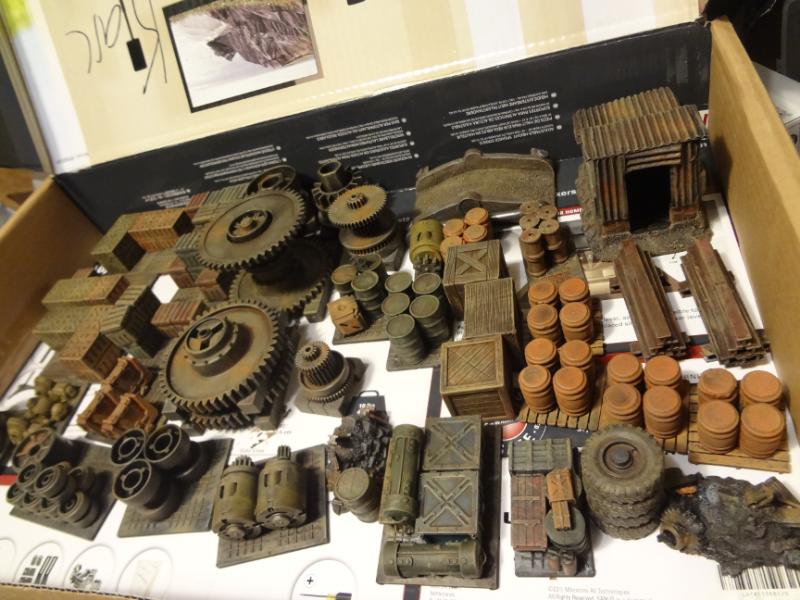 I'll go through them briefly and point out the most interesting bits to give you an idea of what you should keep an eye out for.

Barrels and Spools
I think these originated in the craft shop as little wood doodads. If you paint them thick enough, they'll lose their wooden texture. The barrels on the left are glued to plastic pallets from Lionel that I had bought as a kid in the 90s. 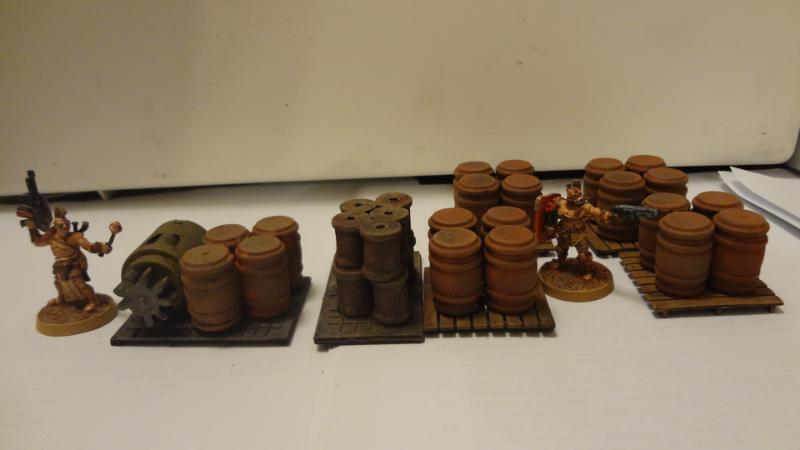 Hist Arts Sci-Fi Bricks
These were a generous donation from fellow club member Tim. They are a bunch of leftovers he had from a round of casting with Hirst Arts latex molds. They're cast in dental plaster, are fairly sturdy and have a great sci-fi look to them. The large boxes are two part, the top and bottom being identical halves. 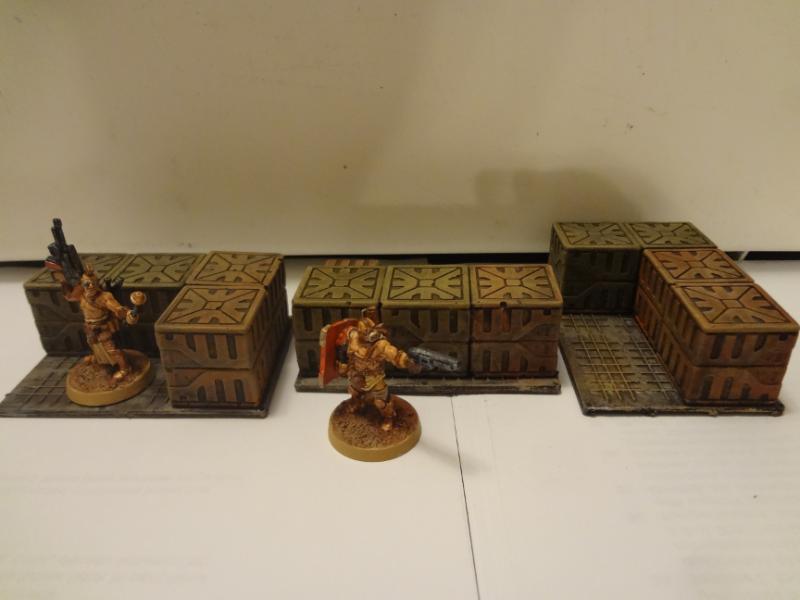 The small boxes are single piece castings, and I particularly like their look 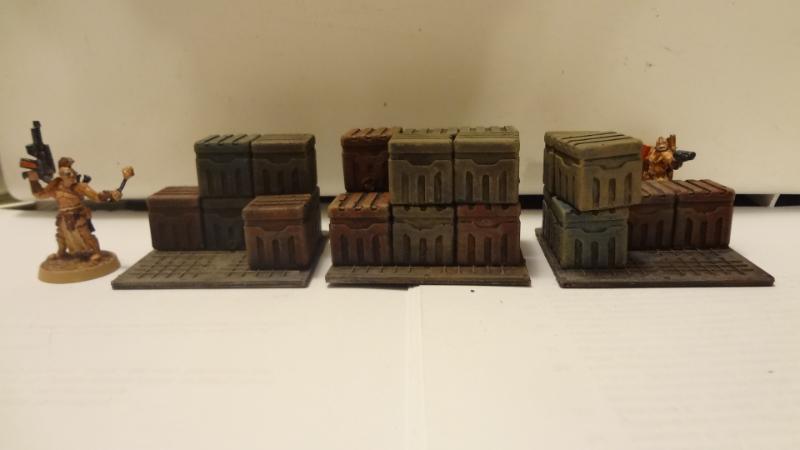 Oil Drums
A classic standby, these are mostly from old-style Games Workshop terrain sprues, combined with a box from Mantic's Deadzone accessory sprue. The wheel stack is from Sea Dog Game Studios, better known for their large, homemade resin mech models for the game Tech Commander. It was a rough casting with a ton of flash all the way up, but it nonetheless looks fine when completed. It comes in a grey resin, so all I had to do was give it a heavy brown wash and drybrush it! 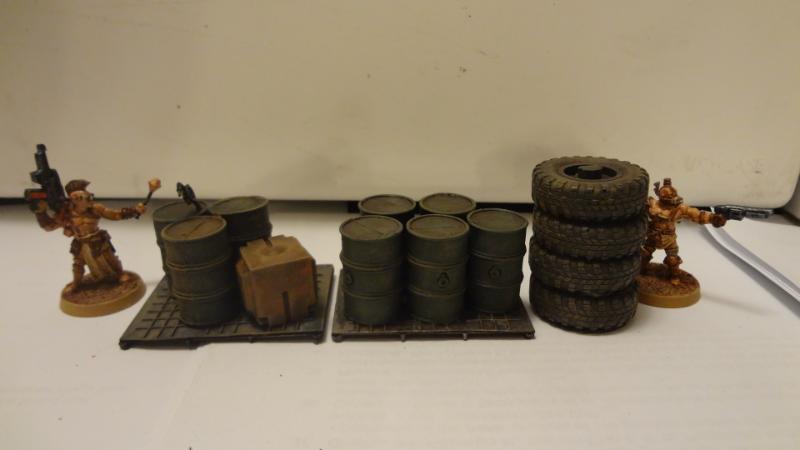 More Mantic and Games Workshop bits
Most of these came as part of a donation from fellow club member Josh. (Sidenote: As you've probably noticed after reading this blog, our club is great about sharing useful bits for terrain projects. By now each of us is well stocked with bits from any number of Kickstarter campaigns, so we're always quick to offer up donations for somebody's latest project.)

Anyway, the Mantic Deadzone rubble piles begin their life as pretty sad-looking blobs with a few blocky bits and beams sticking out of them. However, some sand, additional beam bits, and other details like a chair, gear, barrel and piece of a pen and suddenly they're no longer identical or boring. Even though I'm not going for a ruined future for my tabletop, you've got to have a few junk piles. These pre-made Mantic pieces are a great starting point. As for the GW crates and cases (also from a vintage terrain sprue), it's a nostalgic reminder of the years past, when everything in 40k wasn't covered in skulls. Looks much better, don't you think?! 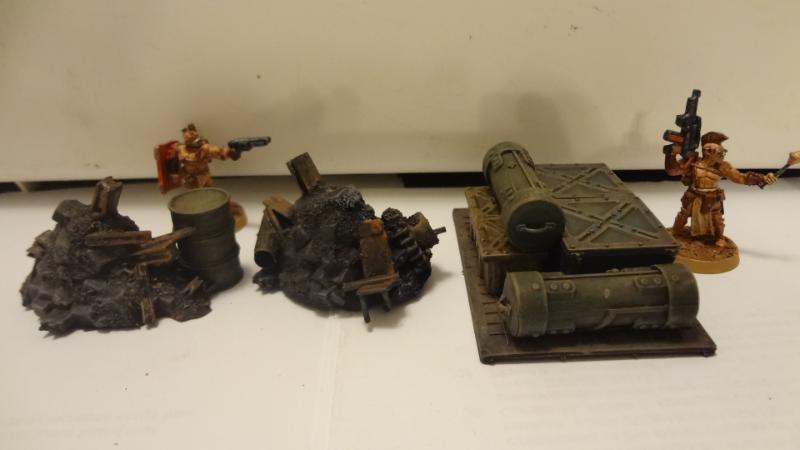 Toybashed Terrain
Except for the red ammo box and little bits on top, this pallet is all soft plastic toy soldier bits with LEGO air tanks. This particular combination of bits has been bouncing around in my bits boxes for almost 20 years now! The big crates were more recently picked up in the random toy bins of various resale shops. Like the tires above, they were just washed and drybrushed. 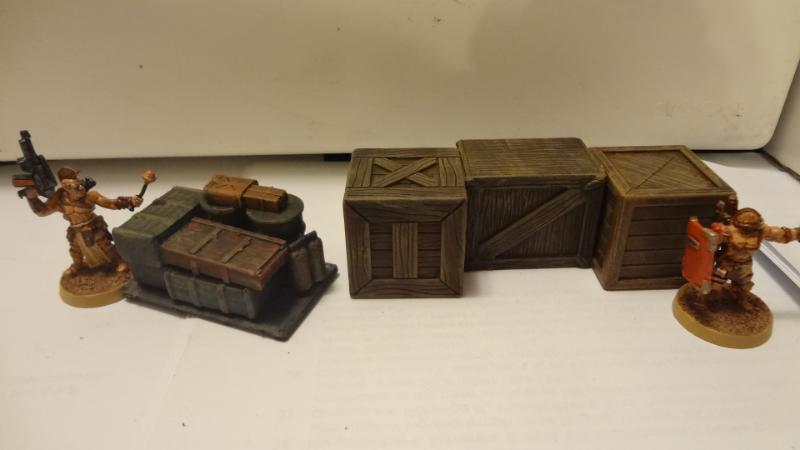 Micro Arts Studios Terrain Bits
This next batch is from Micro Art Studios and was designed for Infinity. I don't normally buy little bits like this, but they were a bargain at the Games Plus auction. They come with little acrylic printed viewscreens, but they didn't fit my gritty dirty aesthetic, so I left them off. The larger piece on the right is another gift from Josh ... it's a really neat unit made for Deadzone by Atenociti's Workshop. Wash the heck out of it with soapy water or else you'll be applying three coats of gesso like I had to. 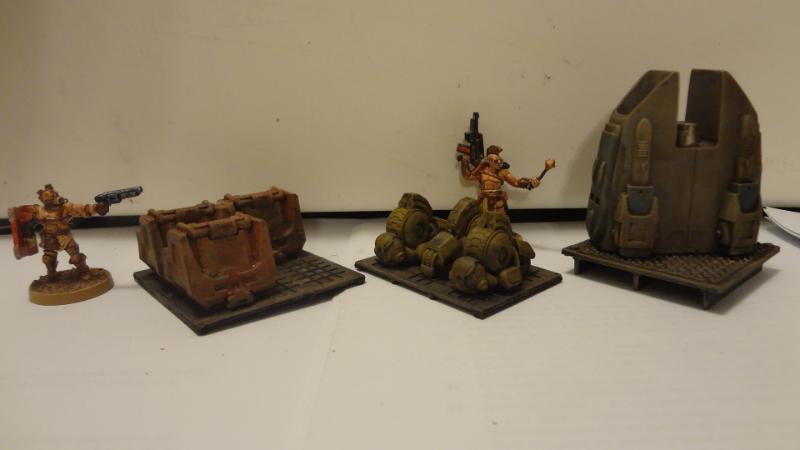 More Toybashed Terrain
Take apart many toys and you'll end up with lots of small electric motors, wheels, gears and other industrial-looking bits. Some of the bits below are nylon pulleys, which really need a good cleaning (I soak them in Purple Power) and either Krylon Fusion paint or a couple coats of gesso to prime correctly. 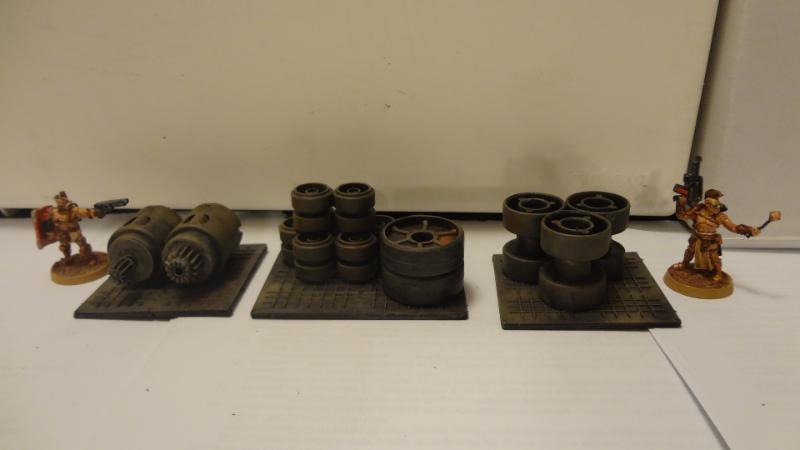 Here's another set of nylon gears from the inside of toys. We've also found a local store, American Science and Surplus, that sells loose bulk gears for cheap. With superglue or epoxy, they can be glued together into some really interesting arrangements. Rather than pallets, I mounted them on piles of "Base 10 bricks" I mentioned in an earlier article. The 10 long bricks can be broken into smaller lengths with pliers. 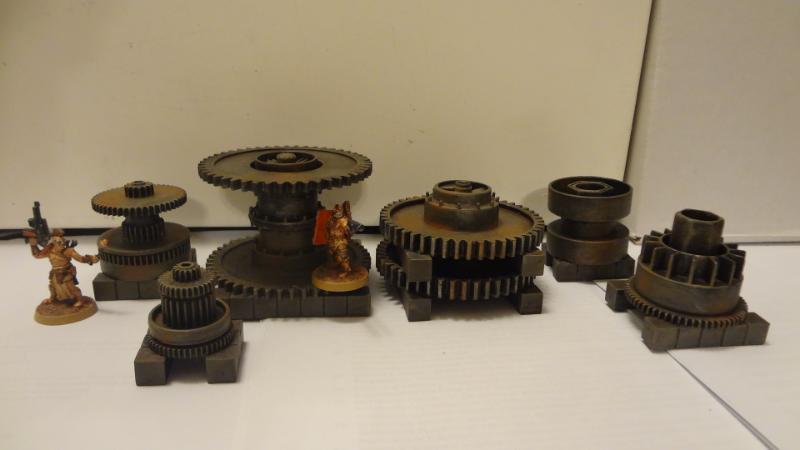 And here's a quick look at the I-beam stacks I built in an earlier post, now with a nice tan drybrush. 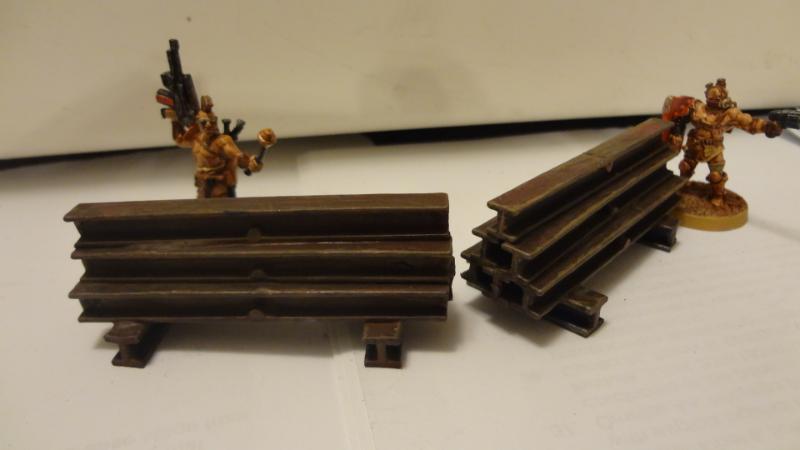 Here are a couple larger items that I completed alongside the batch of scatter terrain. The underground entrance is the base of an old matchbox car escalator. All I had to do was add the corrugated cardboard and put some sand on the bottom. Who knows where it leads? Maybe to a vault, or underground laboratory?

The foot bridge is a 1/300 scale industrial bridge from JR Miniatures. I wasn't impressed with it at that scale (bridge walls as thick as a car?) but it makes a very nice 28mm or 15mm foot bridge. 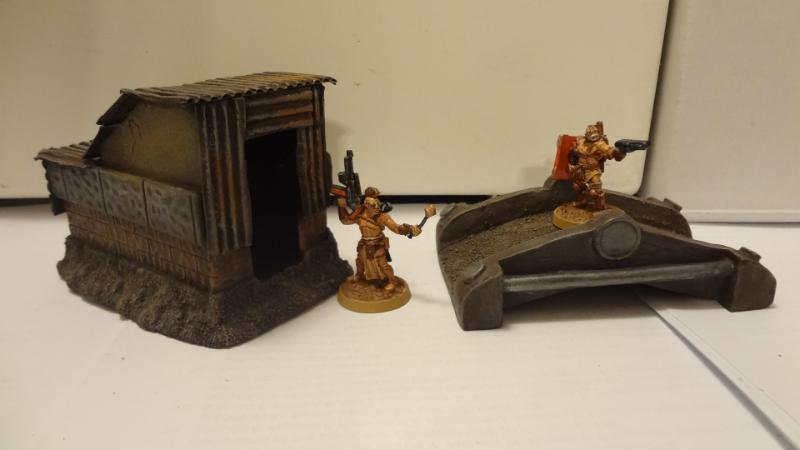 But that's not all!
On the weekend before this painting marathon, I happened to stop at a resale shop and picked up this little beauty, so I painted it up along with the rest. It looks to be spot on for 1/56 (28mm) scale. It's a bit smaller scale than the 1/43 cars that I use, but it's a truck so it should size up pretty good. It'll probably be mostly used as scatter terrain anyway. 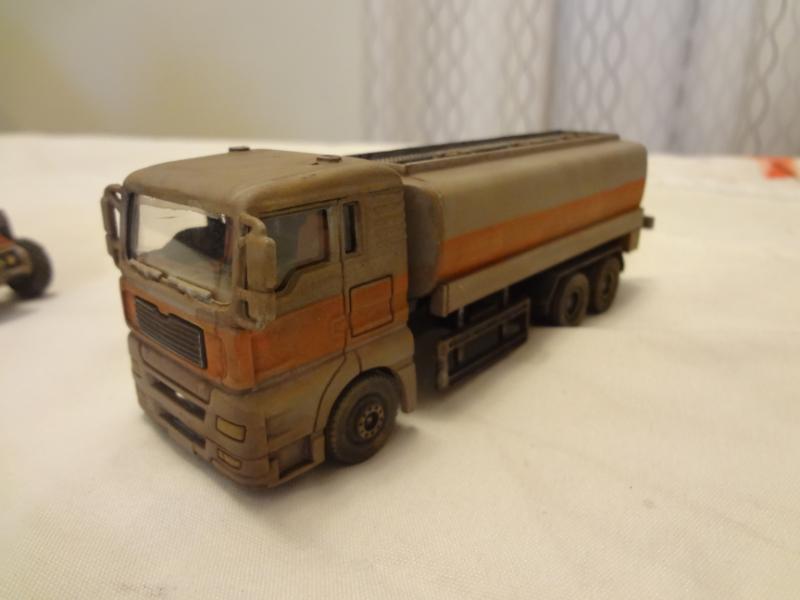 I inadvertently painted it up in the colors of my Junkers army, and it looks great alongside those guys! 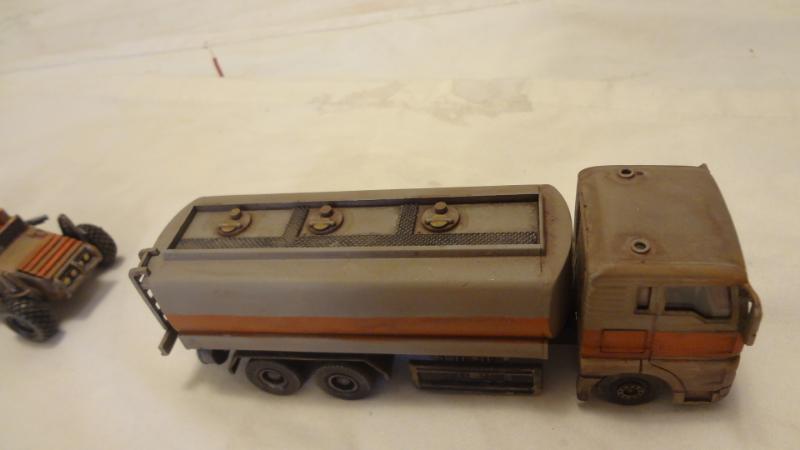 It's a nice little vehicle that's could just as easily be running gas across the post-apocalypse outback or delivering coolant to a battlemech in the year 3025. 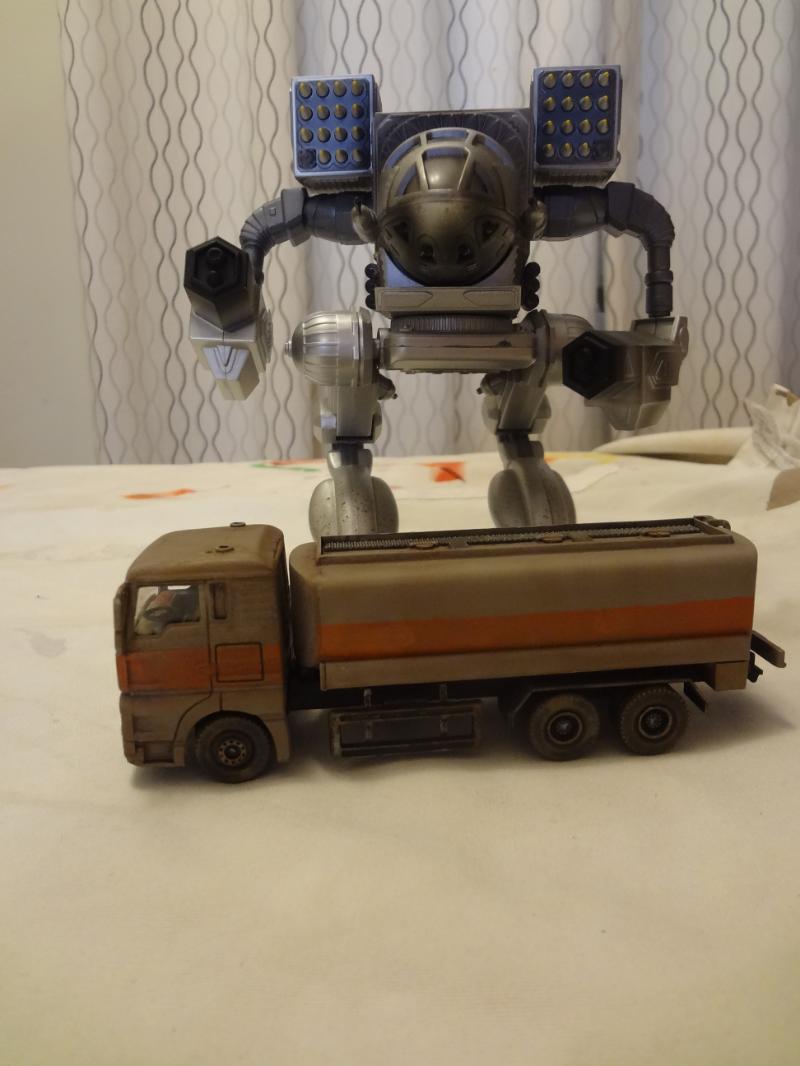 So the terrain insanity continues. My workbench is clear of terrain projects for the time being, but we all know that won't last. Up next is my long-awaited Necromunda Van Saar project, and I also have an elevated train station that's missing a train...