A Sci-Fi Salvage Crew, and Six Reason to Support a Kickstarter

At the club we often trade projects, and here's a look at one such transaction. My end of the deal included this small chem station terrain piece and a yet-to-be-finished vehicle. The figures below are Pat's side of the deal. I based them up and gave a thorough review of these guys more than two years ago, so it was high time to actually get some paint on these models. A project exchange seemed like the perfect chance to finally get this diverse crew of space salvagers painted up.

Like the Van Saar, this crew also gets its own cigar box carrying case. I've really enjoyed converting these into classy storage for miniature warbands. 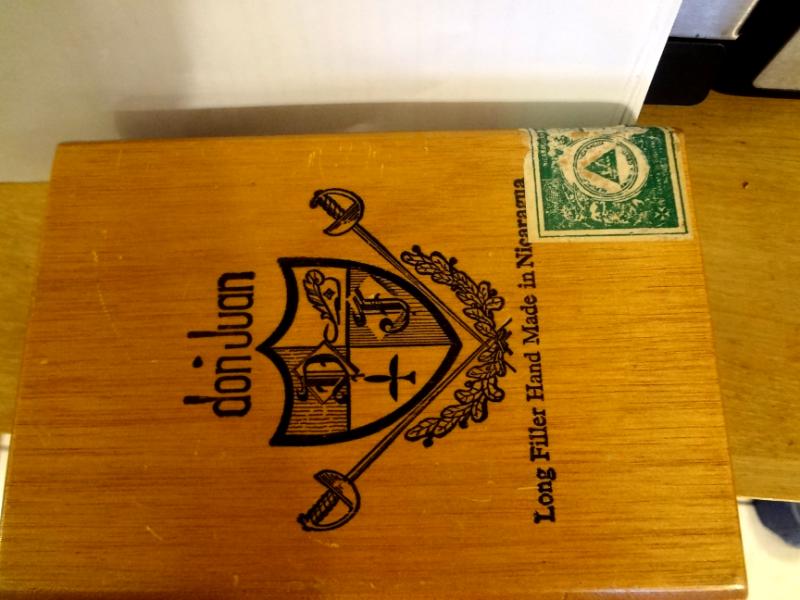 Let's open it up shall we and see what surprises Pat has in store for us? 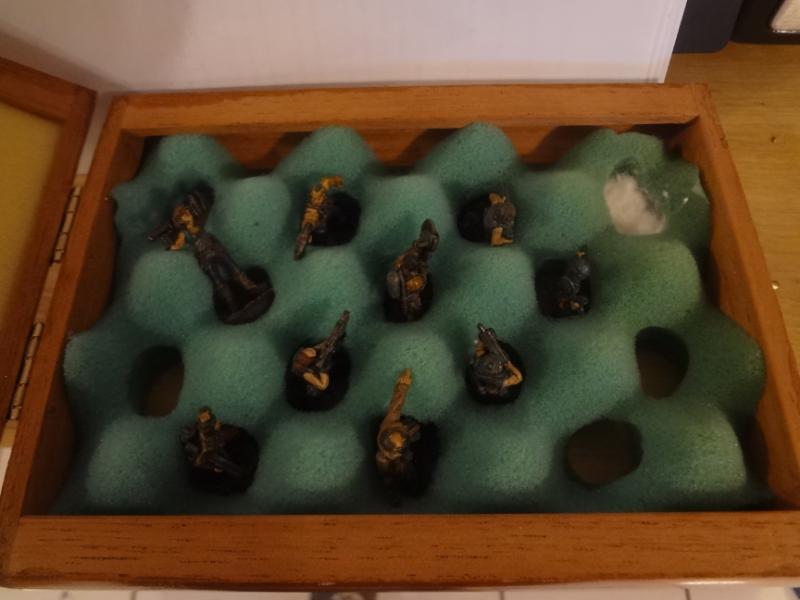 First off, we have an Alpha Forge Salvage Crew member, Reaper Chronoscope's "Rosie Chronotechnician" and a Rezolution "CSO Classic Field Engineer." The Salvage Crew member is out of production, but the others are still available. The Field Engineer is a particularly good bargain. He and most of the CSO Classic figures from the Rezolution game retail for only $3 each, and that includes some nice sci-fi troopers.

I love all the gear on these guys. Rosie doesn't even have a gun, and it's up to the gamer whether the instrument in the Engineer's hand is a weapon or hand tool. It's rare to find so many unarmed sci-fi figs, but they're great for a ship's crew.

The next six figures are from the "Salvage Crew" line. Originally made by Alpha Forge for the Star Mogul game and later re-released by Mega Minis, they represent six fantastic reasons to pledge for the the Salvage Crew Kickstarter that is wrapping up this month.

When he closed the doors on Mega Miniatures and sold off its masters and molds, owner Johnny Lauck kept a batch for himself, and now they're available through this Kickstarter. It may be one of the last chances to get ahold of these figures, and it's certainly the biggest bargain they've ever been offered in. The $30 buy-in includes shipping and currently gets you 27 miniatures!

Here's the breakdown so far.

I'm a fan of both these lines of figures, was glad when Johnny got them back in production the first time and am very pleased they've got another another shot here.

So here's a taste of what's in the Kickstarter. Note that the figures below are the previous versions that had separate heads chosen from a random selection, so they are slightly different from what's in the Kickstarter. Also I've done a bit of modding that I'll note where necessary. The bases and angles may make their heights irregular, but they're all solidly heroic, averaging 28mm from sole to eye.

Like Rosie and the engineer, I love that the technician has some heavy cutting equipment and a torch that leaves it up to the player whether he's armed or not. With a chunky assault rifle (boltgun?) and a shotgun on his back, the guard could easily serve as a bounty hunter in Necromunda.

Here's the last of the crew. The trenchcoated leader has a Pig Iron head. The woman with the center is a missile launcher trooper in the Kickstarter, but I've swapped in a Heresy Miniatures assault rifle.

There's nothing too interesting on the back, just a nice assortment of packs for stowing salvage. I probably should have removed the brace of missiles from the lady, but they could be some sort of salvage.

There you have it. a very nice flavorful salvage crew. I've got a couple more working-class sci-fi crew figures like these. Hopefully I'll find some way to con Pat into painting them and grow the team a bit.

I've got a soft spot for these kind of rag-tag space travelers. The sort of folks who just want to survive in the 'verse, find a crew, find a job and keep on flying.