Here's a look at yet another batch of figures that I didn't paint. Don't worry, I have some of my own creations on display at the bottom of this post!

A year or so ago I purchased a massive load of Essex 25mm medieval miniatures from a local gamer here in the Chicago area.  My intent was to build a "Good Guy" army to counter my "Bad Guy" Kings of War army. The Bad Guy chaos army is still slowly growing, but the idea of building an entirely new army, especially one as miniatures-intensive as this one would be, has become much less appealing.

I finally sold most of it off this this month, but I kept the eight miniatures you see in this post. These had come painted to a standard quite above my own. I added a few missing weapons, touched up a few places that had chipped, and the results are quite pleasing.

The classic blackline and shading work is not a ground-breaking technique anymore, but it's very well done and far beyond my own abilities. The freehand work on these figures is truly impressive.

Check out the scabbards!

This got me thinking about some of the other work I had seen while visiting the painter, a local chap named Jon Stachura. I contacted him and asked more about his work and he was kind enough to offer up a wealth of photos and information about his long career as a miniatures painter. Look for that in a subsequent blog post.

Regarding the miniatures themselves, the Essex miniatures are a bit bigger than some other classic 25mm lines and are chunky, even by the standards of their day. Still, the details are quite good, and they are a step up in quality from most of the Old Glory 25mm figures that I've seen.

They are shorter than many current 28mm figure lines (such as the ubiquitous Games Workshop), but the chunky dimensions means that they would probably look good on the same tabletop if kept in their own units. And it will work perfectly for any of the warband-style skirmish games that the club plays regularly. All in all, this is a set of minis that I am thrilled to be able to add to my collection. I saved a small batch of the unpainted Essex to add to this group for my Of Gods & Mortals warband.

After our most recent Kings of War game, I decided to upgrade my chaos army to make the archers a little more powerful. Here is a fast and cheap way to build an "extra rank" of pavises to bulk out such units! 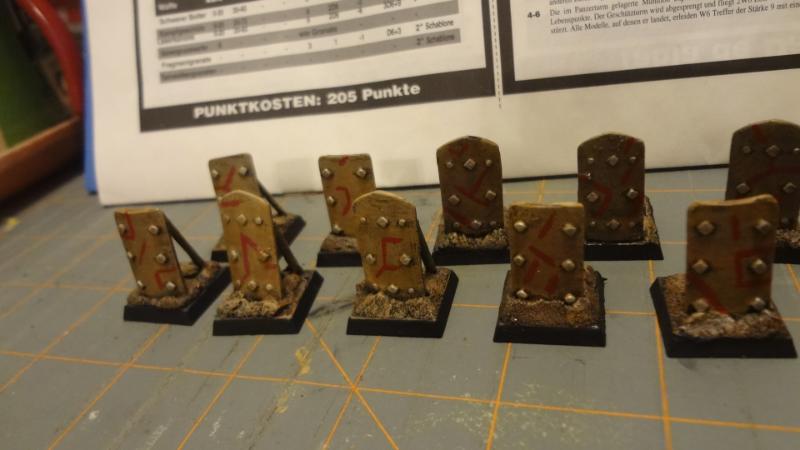 I've currently got 30 chaos archers (old Battlemasters figures) painted up, but 40 will get me to horde-sized unit in Kings of War, which is much more potent. I have exactly zero interest in painting more of them, and I'm not even sure I even have any more. So instead I decided to individually base and paint 10 pavises I had lying around from the aforementioned lot of Essex medieval miniatures.

The pavieses are supported by sections of toothpicks, both of which are just pressed into premixed concrete patch and cement, which readers of this blog will recall is one of my favorite products for figure bases. 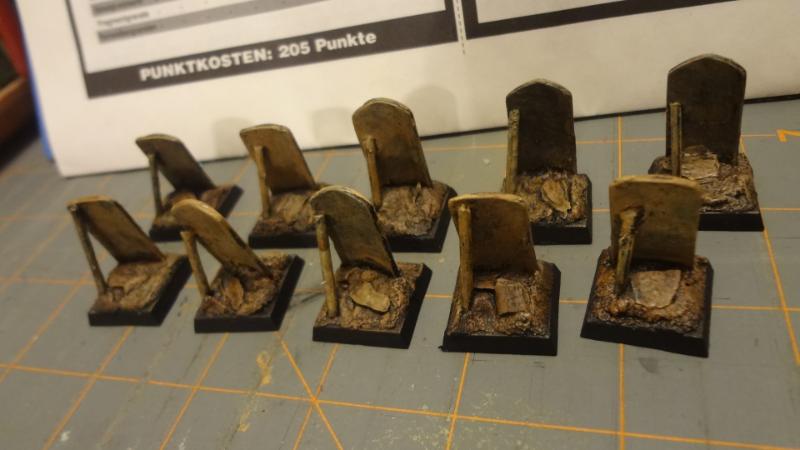 The painting is just black gesso undercoat, base colors, drybrushed base, a few indecipherable red chaos runes and dip, followed by the matt varnish and done!

I would recommend only that anyone doing this project do one thing differently than I did. Put the pavise in the middle of the base rather than the front edge. Some of mine ended up a bit tippy, and I had to add some weight (old metal sprue) under the opposite side. Also, the pavises already hide most of the basing on your front rank of miniatures, so if you put the pavise at the front, you loose some valuable space in which to put your basing scheme in clear view.

Look for these pavises in our next game of Kings of War!