Last month the club gathered to try out Power Legion, a skirmish game set in a comic book super world written by Andrea Sfiligoi and published by Ganesha Games. While the game doesn’t have the rights to any of the classic comic book characters, the ruleset can easily recreate those characters.

With my collection of older HeroClix figures, it was easy to pick out some fun sculpts on some older figures of the appropriate characters and rebase them with plastic bases from Proxy Models.
(Full disclosure: I am a credited volunteer editor for Power Legion. I was also a serious HeroClix player, so I really like my super heroic games.)

For me, the best part about a game like Power Legion is recreating the battles from classic comic books. There are few comic books more seminal to my love of comics than Fantastic Four #250. Back then when a comic hit a milestone like a 50th or 100th issue, you were in for something special. 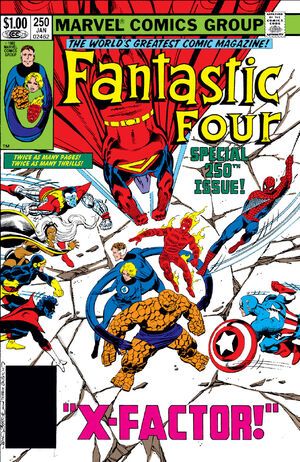 Using the stats available online, I created teams for Tim, newcomer Brad, Karl, and me. Tim played (and supplied rebased HeroClix figures for) the Fantastic Four, consisting of Mr. Fantastic, Invisible Girl, The Human Torch, and the Ever Lovin’ Blue-Eyed Thing.

Karl used Gladiator, a super man from a distant galaxy known to the Fantastic Four and the X-Men.
I got to play Captain America and Spider-Man.

In Fantastic Four #249, Gladiator arrived on Earth hunting alien Skrulls. Thinking the Skrulls were impersonating the Fantastic Four, he attacked them and quickly defeated them. As the book ends, the X-Men arrived to save the day.

In #250, the X-Men attack Gladiator, drawing Spider-Man and Captain America into the battle. This is where we begin our scenario. Each player was given a secret victory goal.

To battle in downtown New York, you need an urban landscape. For ours, I printed and assembled six buildings, duplicating one, from the Capital City: Base Set PDF from Fat Dragon Games.
In Power Legion, each character gets four statistics: Mind, Agility, Strength, and Knockout. (M.A.S.K., see what Andrea did there?).

Each stat is assigned a die: d4 (feeble), d6 (average), d8, d10, d12 and even an occasional d20 for the most powerful characters. In addition, there are pages of powers and abilities that will be familiar to comic book fans and allow players create any hero or villain they might want to play as in the game.

Fans of other Ganesha games will recognize the activation system. One difference is that the player rolls one die (usually a d6 to a d12) with the result giving the character one, two, or three actions to take, while losing their turn on a die result of one. And Ganesha gamers will also recognize the three movement sticks.

Early in the game we realized fliers were fast and cover a lot of terrain quickly. Walkers can take some time to get where they are going, especially if they roll low or miss their activation rolls entirely. That happened early to Tim as the Thing moved into the game slowly.

As the game began, Gladiator swooped from the street to the top of the tower to attack Spider-Man. He must have heard Spider-Man’s crack about his mohawk haircut with his super hearing. The attacker and defender roll their Agility die or some other die if they have certain abilities. Then, if the attacker rolls higher they roll Damage, pitting the attacker’s Strength against the defender’s Knockout.

Gladiator missed his attack and the X-Men went on the offensive. Colossus threw a car at Captain America while Cyclops blasted at the Star-Spangled Avenger, knocking him down to recover on his next turn.

Spider-Man spotted this assault from the heights of the skyscraper and abandoned his battle with Gladiator to help Captain America. When two characters are in melee, whoever rolls higher on the attack then rolls for damage on their opponent. So although Spider-Man was on the offensive, Colossus rolled better for the knockout. And for the trouble he took to come to the aid of Captain America, Spiderman got KOd.

Gladiator’s next attack would knock out Storm and the Human Torch with a planned ricochet shot. Storm fell over the side of the building and was revealed to be a Skrull! The X-Men are the fiends Gladiator has been hunting!

Below, Cap and Colossus squared off in a melee that would last the rest of the game. Both were able to hit each other regularly but neither was able to land a telling blow as Colossus’ armored form and Captain America’s shield kept either from being harmed.
Even with the protection of the Invisible Girl’s force shield, which eventually got her knocked out by Cyclops, Captain America could not find an advantage over Colossus.

Once Gladiator knew who the Skrulls were, he made quick work of Nightcrawler and eventually knocked out Cyclops when he swooped in for an up-close melee attack rather than trading ranged attacks with the long range marksman.

Colossus continued to square off with Captain America, and it looked grim for the silver skinned Skrull imposter as The Thing moved in. Captain America landed a minor blow that knocked down Colossus, but The Thing was unable to finish him off and the Skrull regained his feet to face off against Captain America and The Thing, then eventually Gladiator as well.

This is when the game devolved into a series of roll-offs as all the characters were landing blows, but none connected for the Knockout. We eventually decided to give the game one more round and on his last attack, Colossus finally took down Captain America.

This meant the Skrulls were able to take down three members of the Fantastic Four (even if it was Gladiator who did their work for them with Mr. Fantastic and the Human Torch) and Gladiator took down three of the Skrull impersonators, leaving Karl and Brad tied for the victory in the scenario.

In Power Legion, when a die roll is modified, it is shifted to the next die type. So a d6 can shift down to a d4 or up to a d8. So, with a second or third action on an activation, it was fairly easy for characters like Nightcrawler or Captain America with the Acrobat trait — gaining a shift from a d10 to a d12 on a melee attck — to make a Power Blow and shift from that d12 to roll a d20 on an attack and hitting successfully. But then they were only rolling a d6 or d8 to deal damage. It made me feel like I was missing some rule or ability that would help that final blow land successfully for damage.

During the game, we found it difficult to damage characters with the Armor trait. Instead of a die shift, Armor adds half the number of sides of the Armor die to a Knockout roll. Collossus with d10 for his Armor added 5 to every Knockout roll. That is an imposing number when the attackers were rolling a Strength die of d8 or d10.

During our game, we also never selected any Major Damage effect other than making the opponent make a Knockout roll. A roll on a chart of damage effects, both minor and major, might give the game a little more flavor.

Overall, we enjoyed the game and we look forward to playing again. Of course, it being our first game, we made a few errors. There are also some things that need clarification in the rules. We also left out the Ace Cards and Fate Points that give characters more comic book actions. We wanted to keep thing simple the first time out.

For Karl, not being a superhero gamer before, he figured it would be a good game — it's Ganesha after all — but not one that would interest him much. After the game he really enjoyed it.

"I found the rules pretty easy to learn being in the general vein of Ganesha," he reported. "However there are some very nice changes to the dice mechanics, including the use of the whole range of polyhedrals which I really enjoyed," reported the CSW headman. “I probably won't spend much time painting superhero figs, but it's definitely a game I'd play again and I hope to dig into the rules a bit as they seem to be setup to incorporate the police figures I just finished painting."

We found that multiplayer didn't slow down quite as much as other games we've played, although 2-3 characters per player might be a better roster for beginners.

Look for more Power Legion from CSW in the future. Excelsior!

6 responses to “Power Legion Game Report: The Fury of Gladiator”