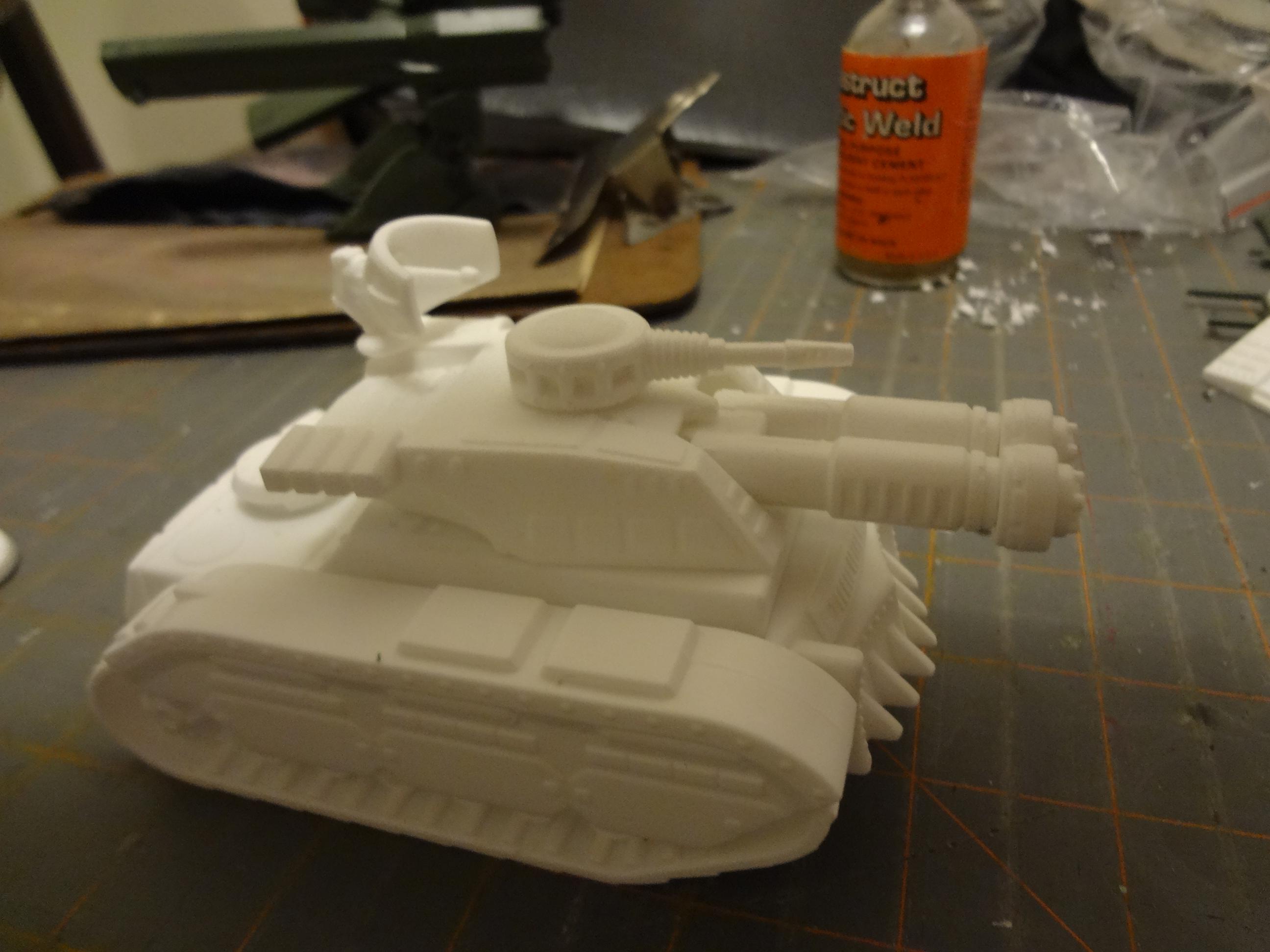 I've got a bargain on the desk today -- it's a 28mm "Bronekorpus" tank kit from Russia, made by Tehnnolog, the company best known for its Robogear line of mech kits.

Tim and I bought a pack of 10 of these kits on eBay. Shipping ranges from $1-$2 for each tank. As you'll see below, it's not a perfect product, but it's a solid model with a lot of options and a great bargain.

Here are the 19 parts that makeup the kit. 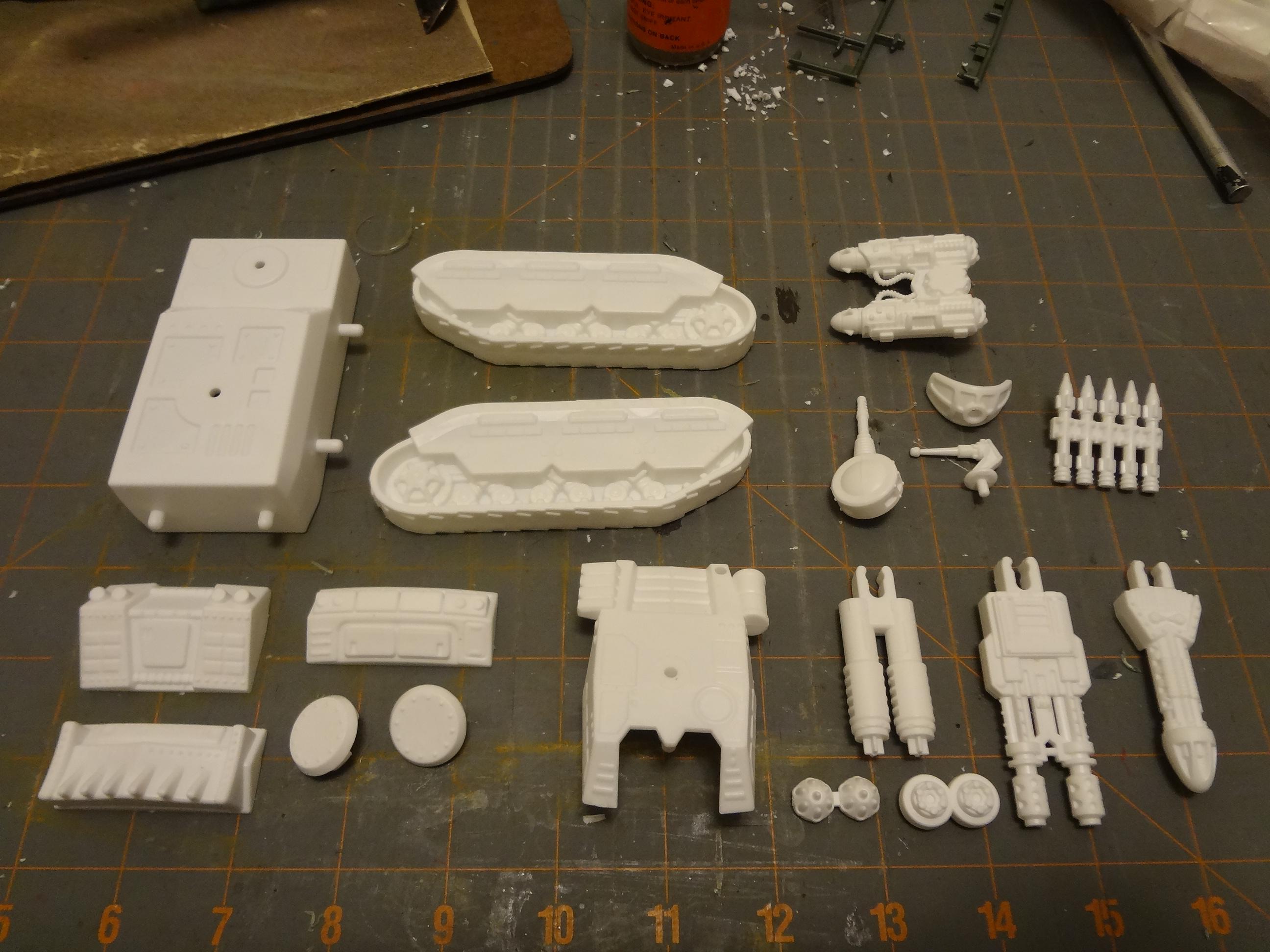 I don't know how they come from the factory, but mine arrived already off the sprue in a plastic bag. The casting is well done and the plastic is a polystyrene that feels very similar to that used by Games Workshop and other wargames companies. It's easy to clip, cut, scrape, file and glue.

Here's the hull and treads: 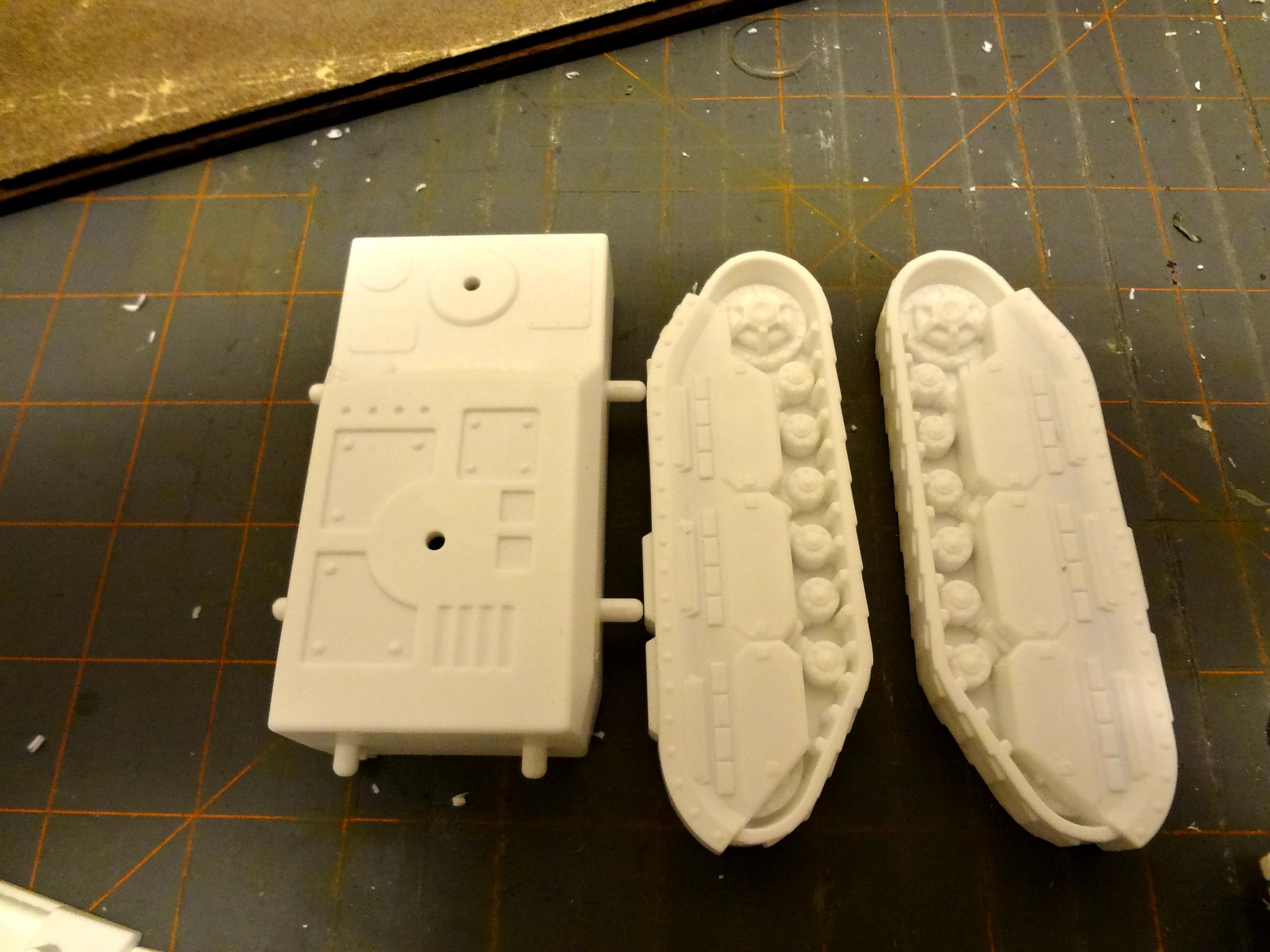 The front and back pieces and hatches: 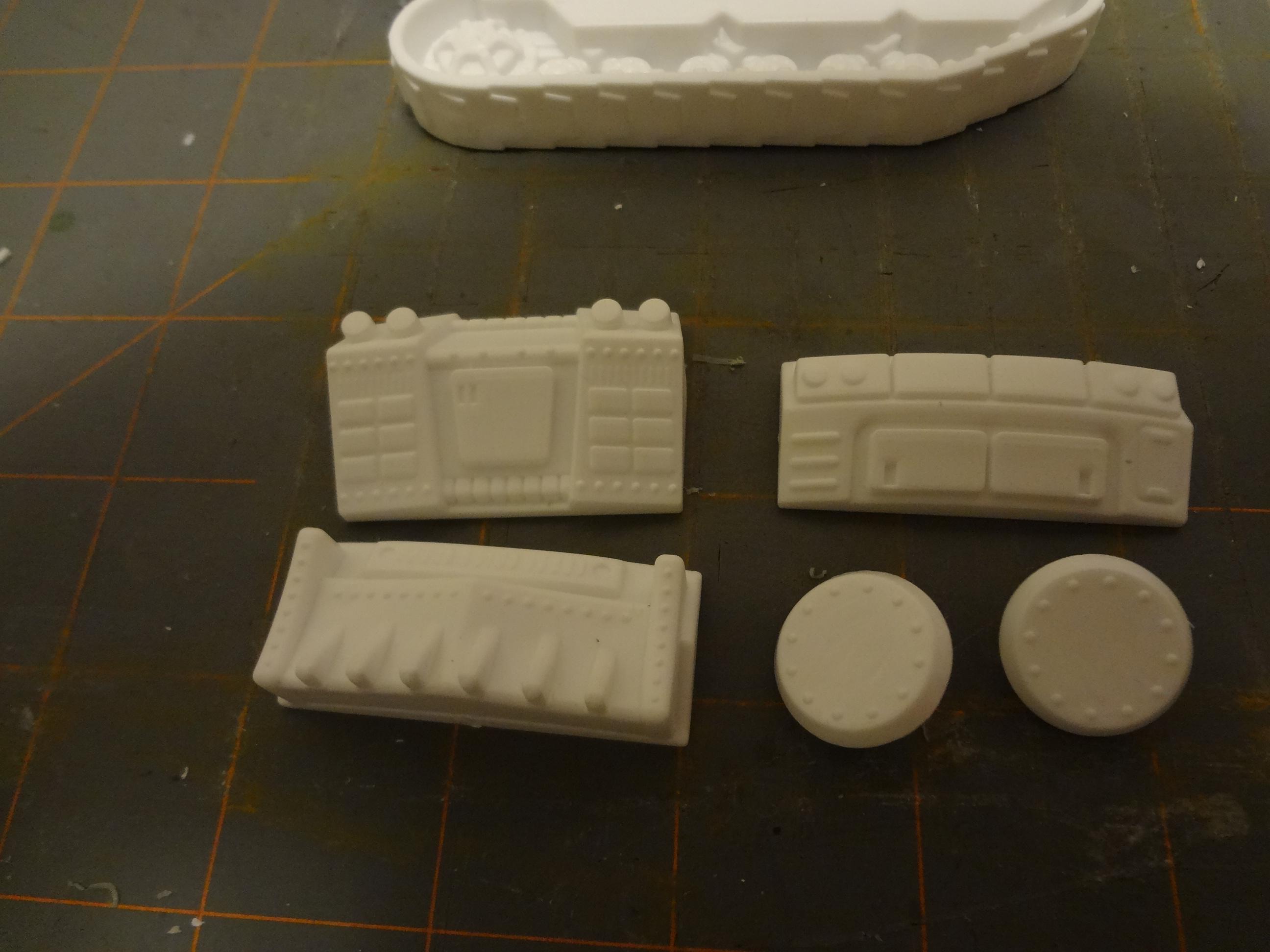 The turret and turret weapons options: 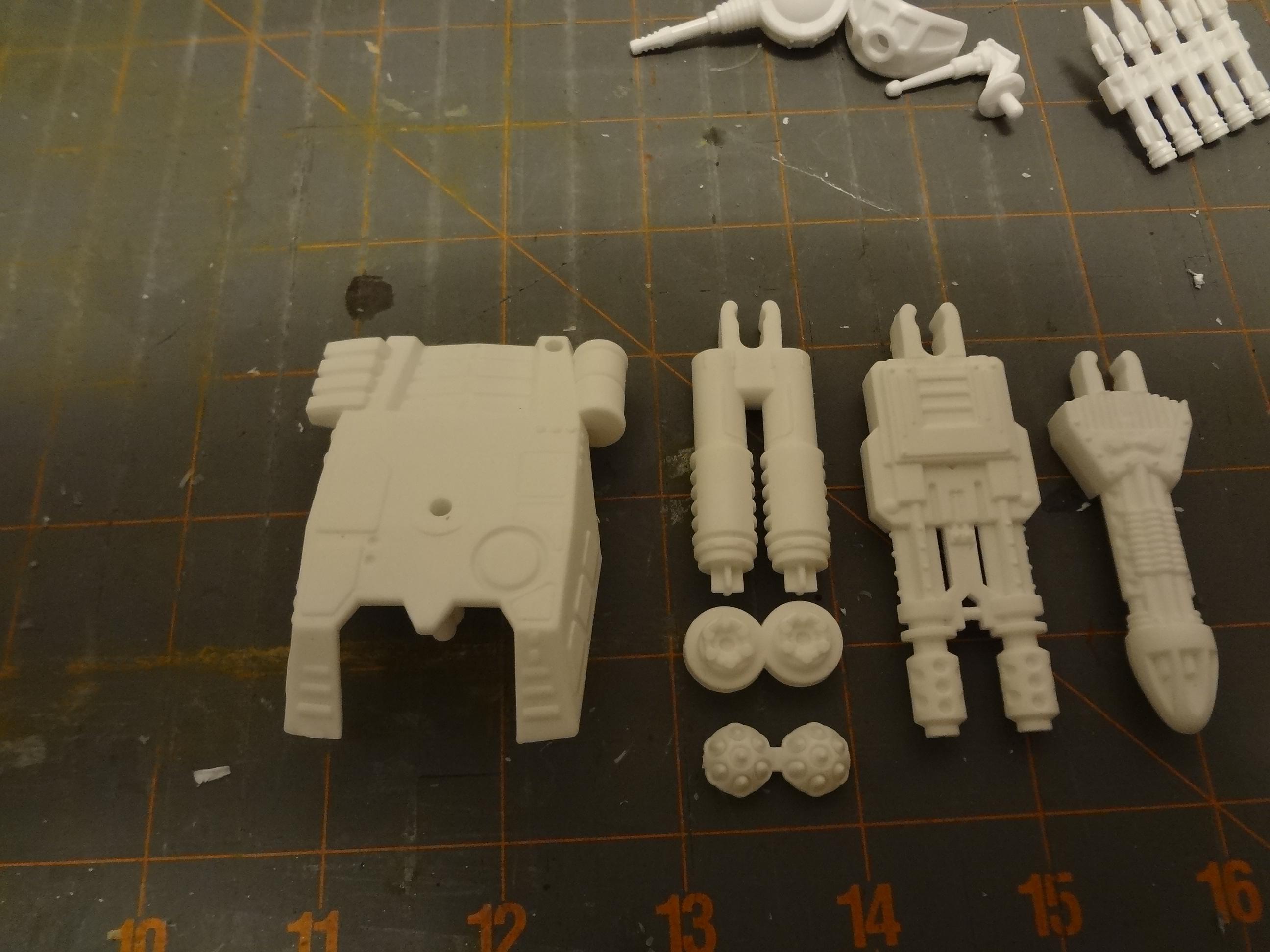 The first of the three weapons can either be left as is or given one of two muzzles. The third weapon is a plasma-type gun that will be familiar to those who have built Robogear kits.

Here is a selection of secondary weapons: 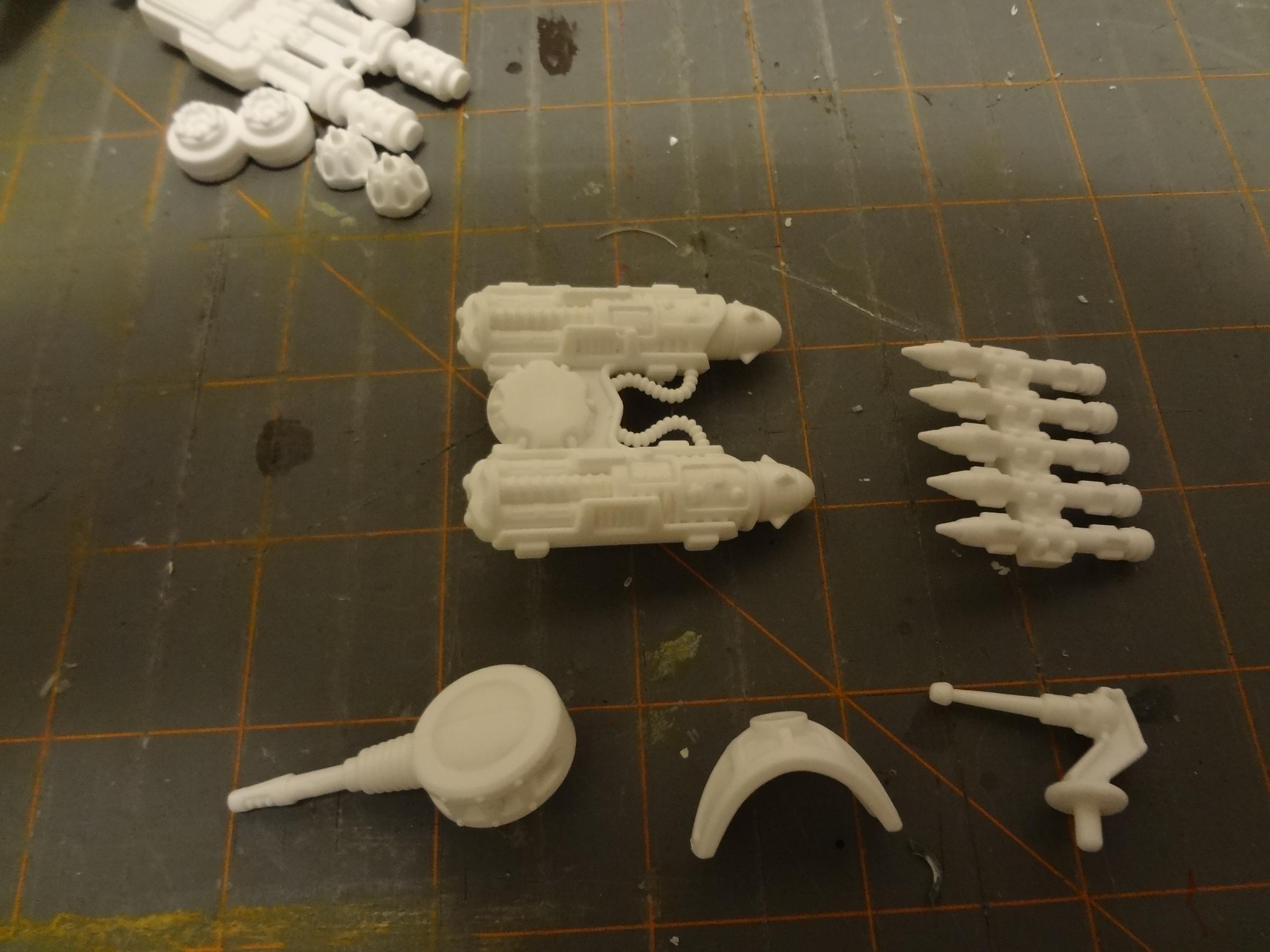 The dual missile launcher is a single cast piece of a Robogear weapon that was formerly 3 pieces (rack and two missiles).

The last item can be assembled as a small anti-personnel laser or as a radar array.

Construction Notes and the Flaws
Everything in this kit be pushed or snapped together. There's no reason to use glue if you don't want to, and some gamers might wish to leave the kit with as many options as possible. The turret weapons slide right on from the bottom when you take the turret off. 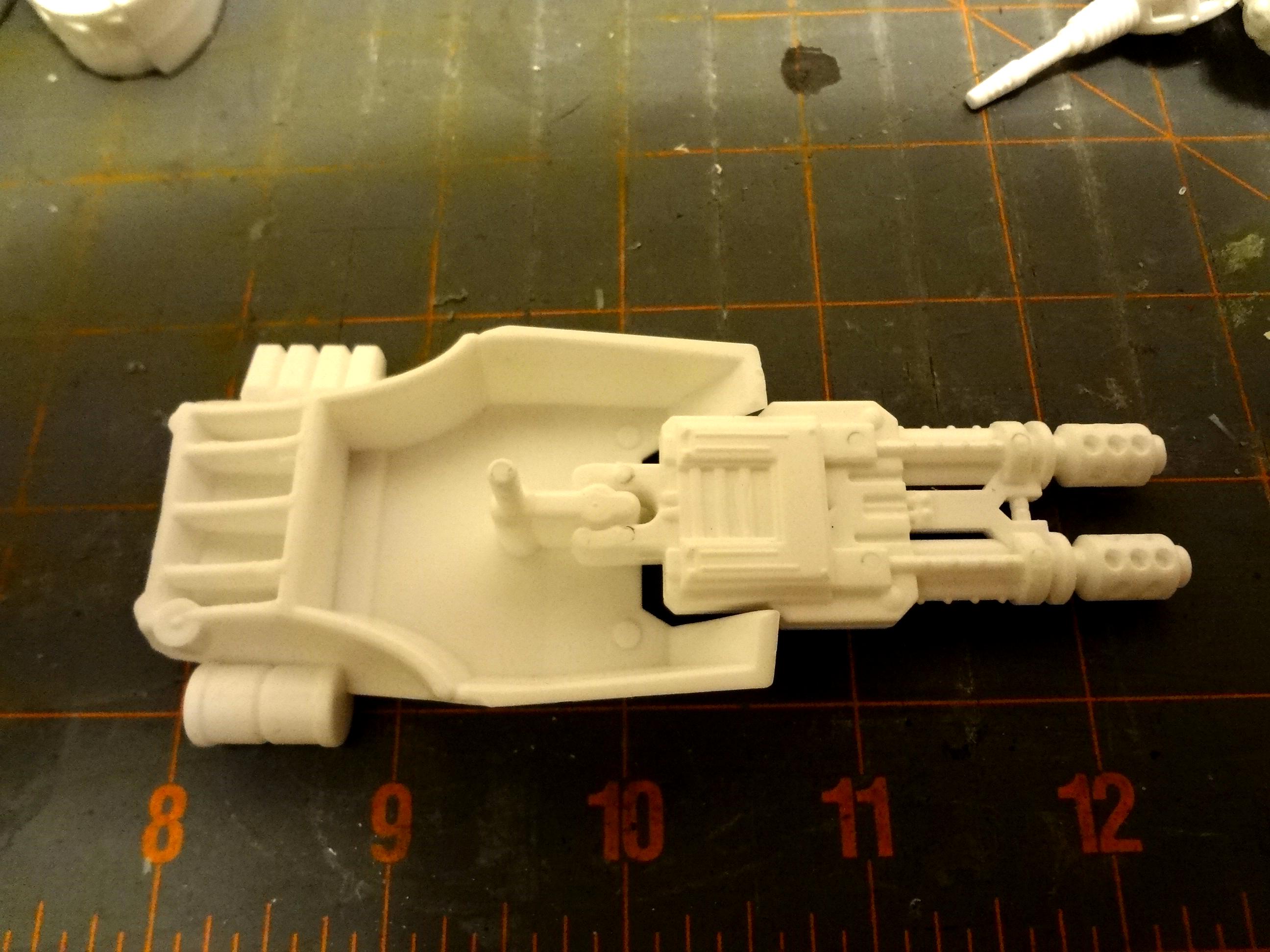 However there are a few design flaws,
First, if you put the mini-turret on the lower hull surface, the main gun will hit it. 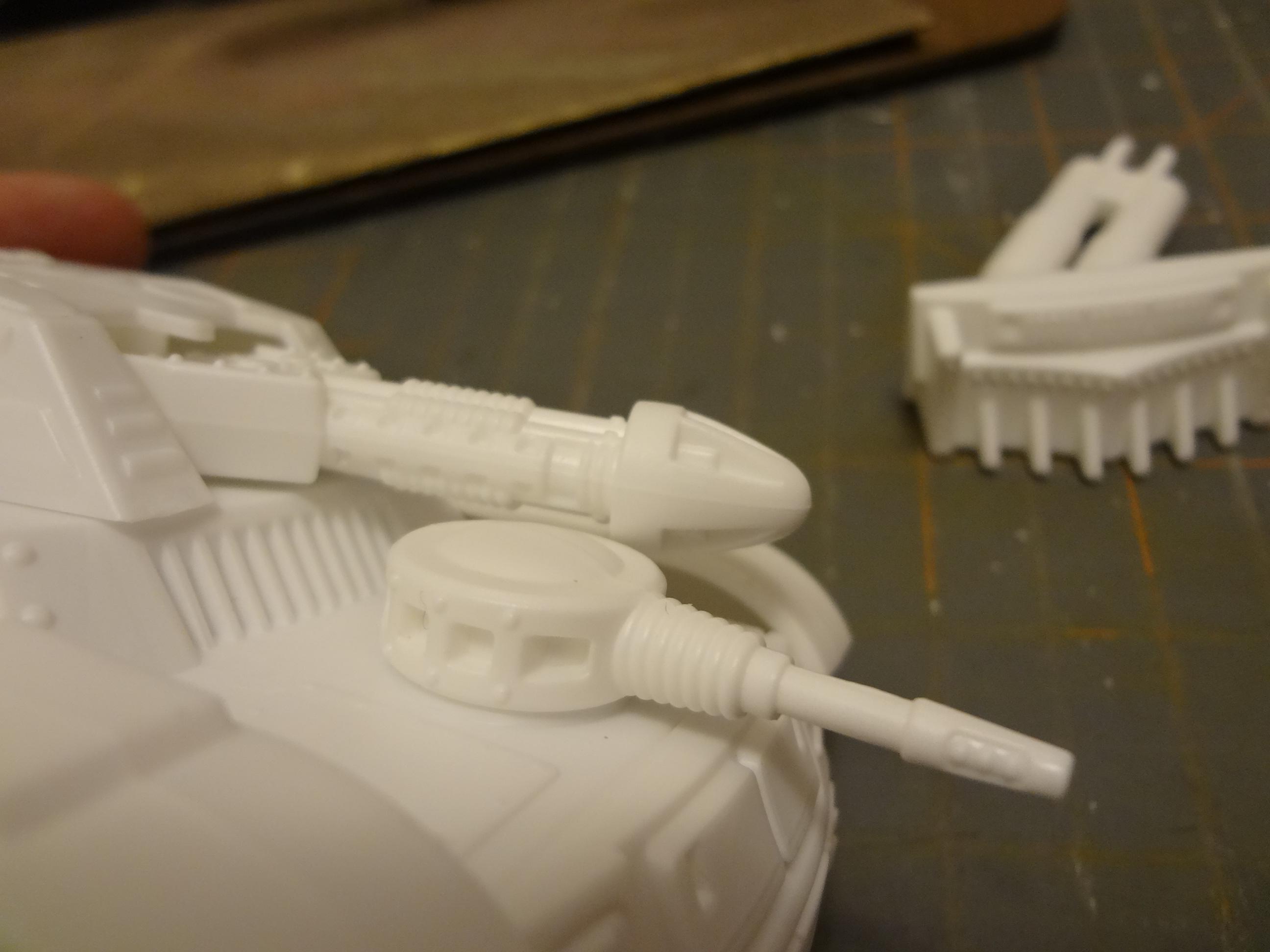 This can be remedied by shaving away the round rim on the lower hull and/or the rim on the mini-turret.

Secondly, and most annoyingly, no matter how you assemble the treads (they can slope forwards or backwards) you end up with a gap between the treads and the lower section of the hull. 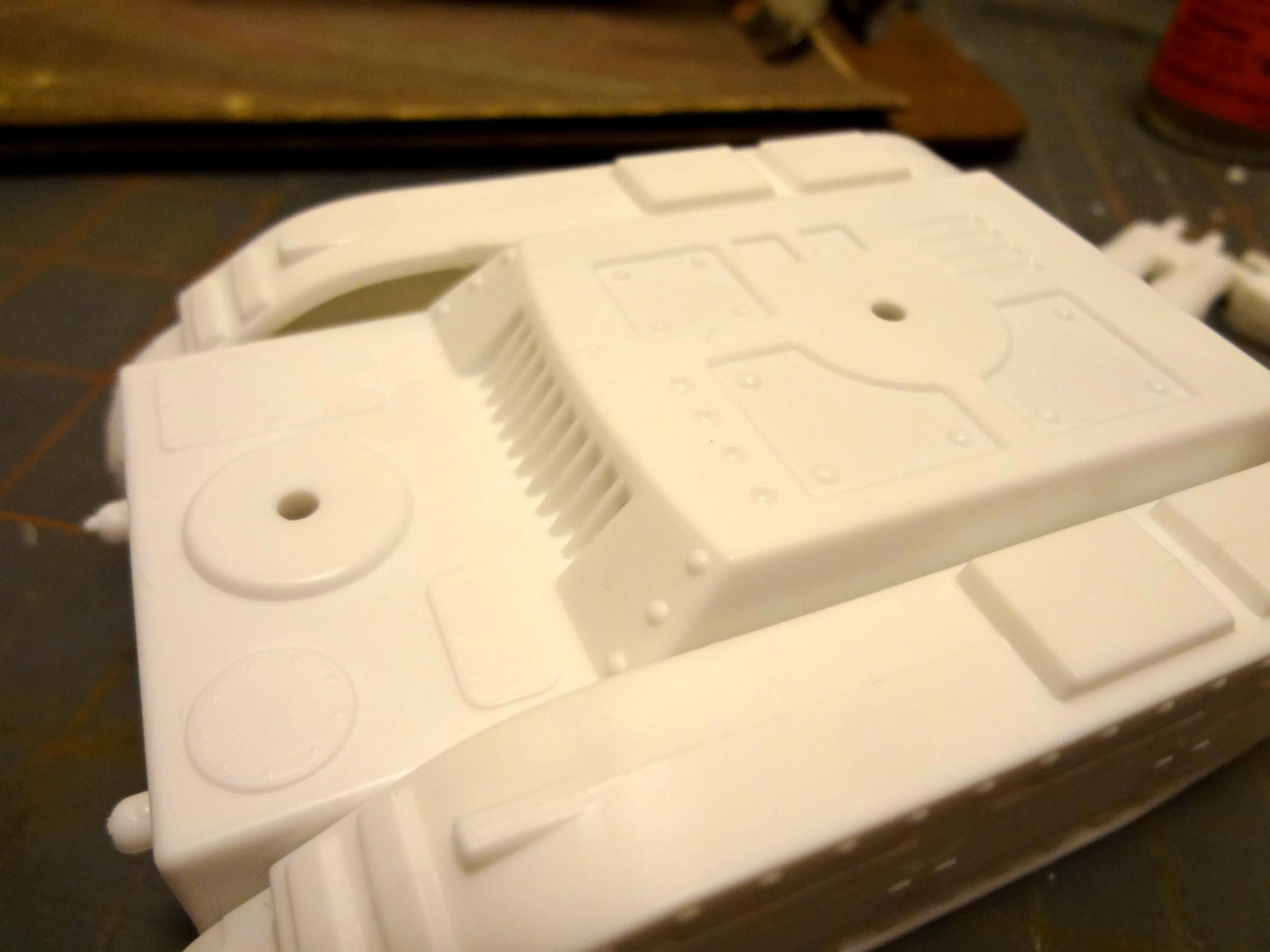 This can be remedied by filling the gap with putty or plastic card, or by raising the hull up. It's a small matter to clip away the mounting pegs on the side of the hull and just glue the treads a bit further down the body.
Here's what the difference looks like between the raised hull and assembling the model as intended. The figure in the picture is exactly 29mm from sole to eyeline. 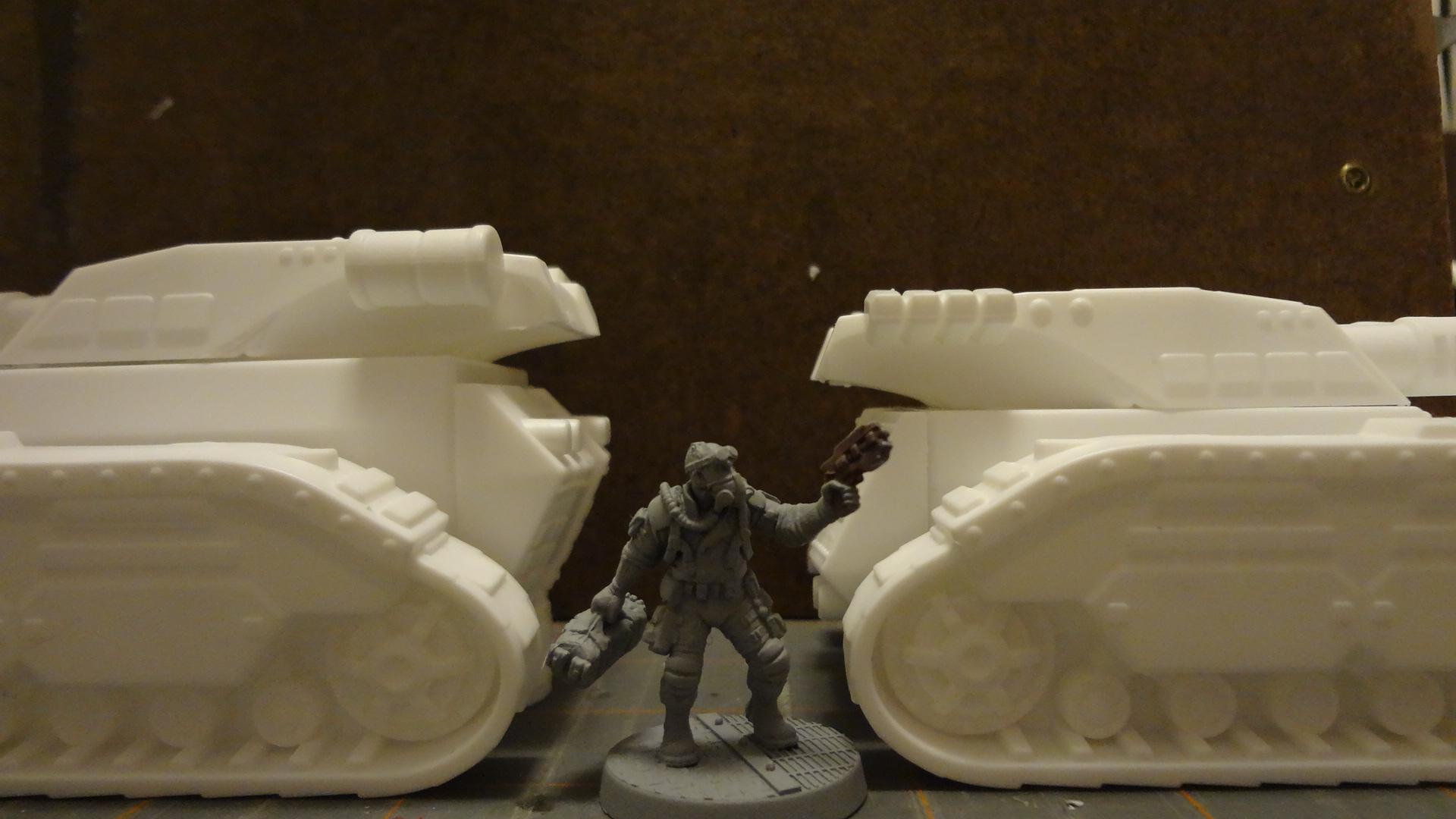 I think the raised hull looks better, though the top edge of the hull side has no detailing whatsoever as the model designers intended for it to be mostly obscured by the treads. Not a major problem, but worth noting.

Lastly, when assembled with the bottom of the front treads overhanging (like most modern tanks) the treads will face the wrong way.

Warhammer 40,000 Comparison
Here's how it compares to an Imperial Guard Leman Russ Battle Tank by Games Workshop. It's quite a bit shorter. 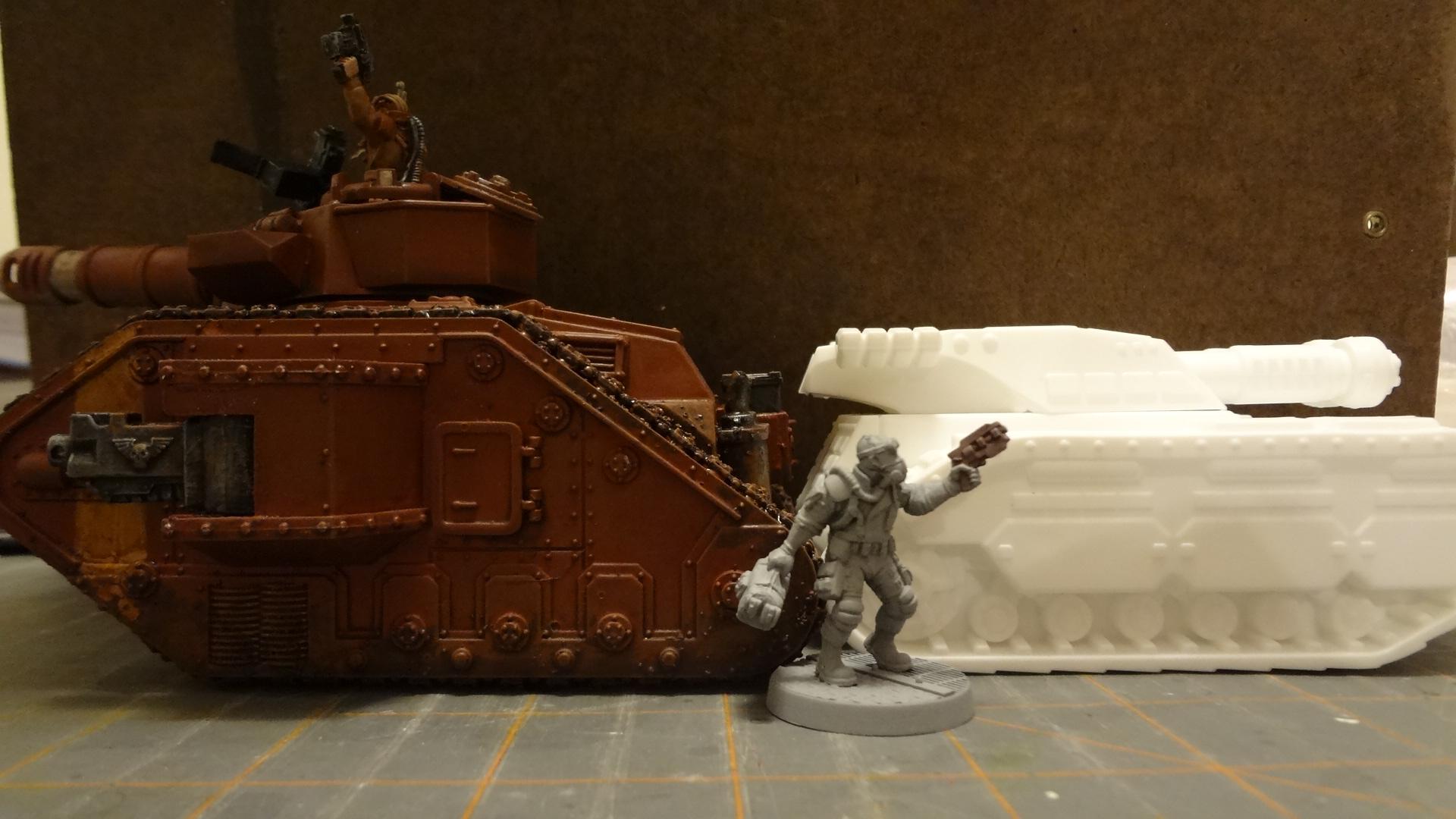 Even my raised version is stunty by comparison. 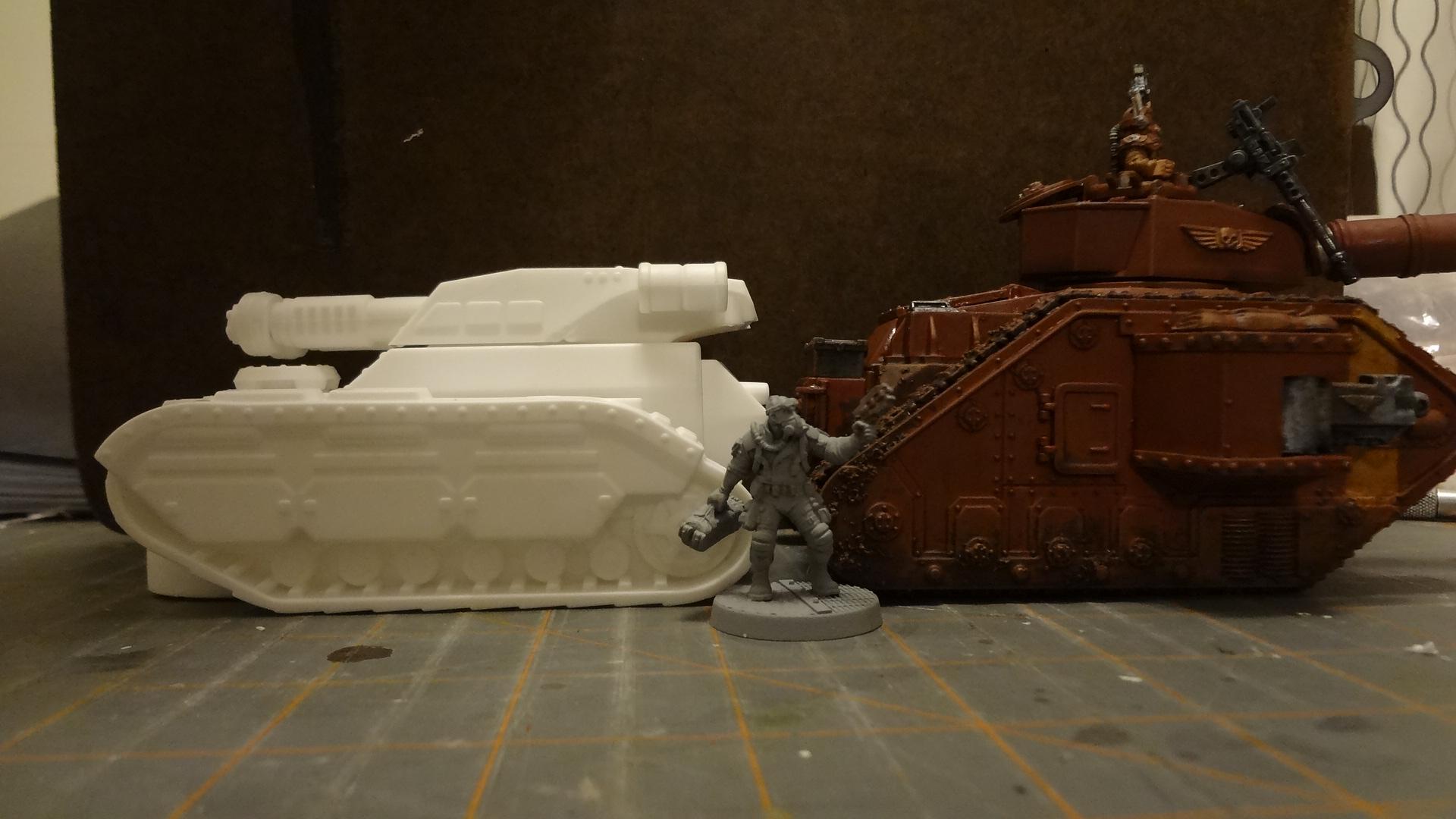 However, the footprint is actually quite close. 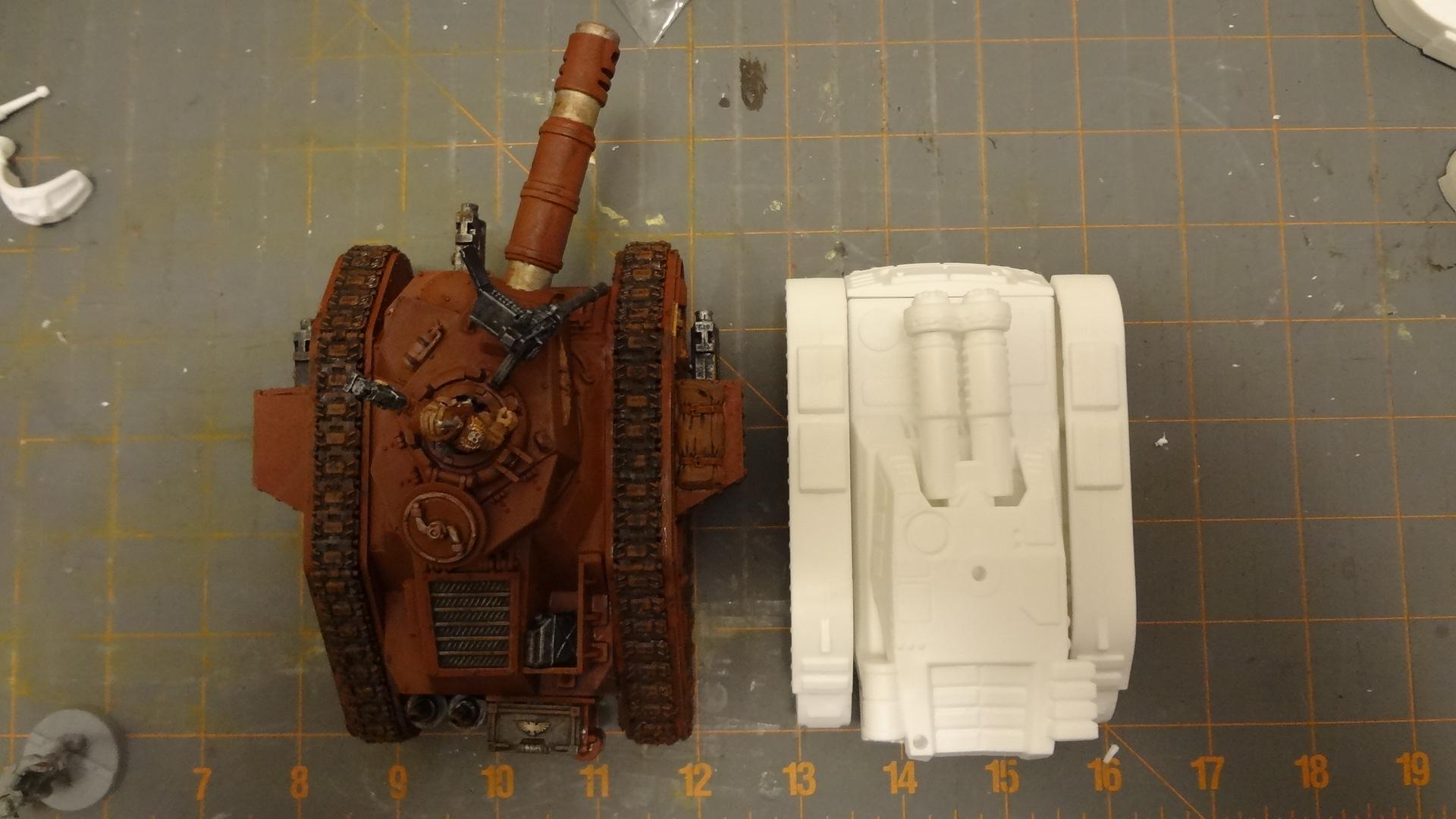 The BroneKorpus is about 1/8th inch shorter in length and 1/4 inch smaller in width, not counting the Leman Russ side sponsons. 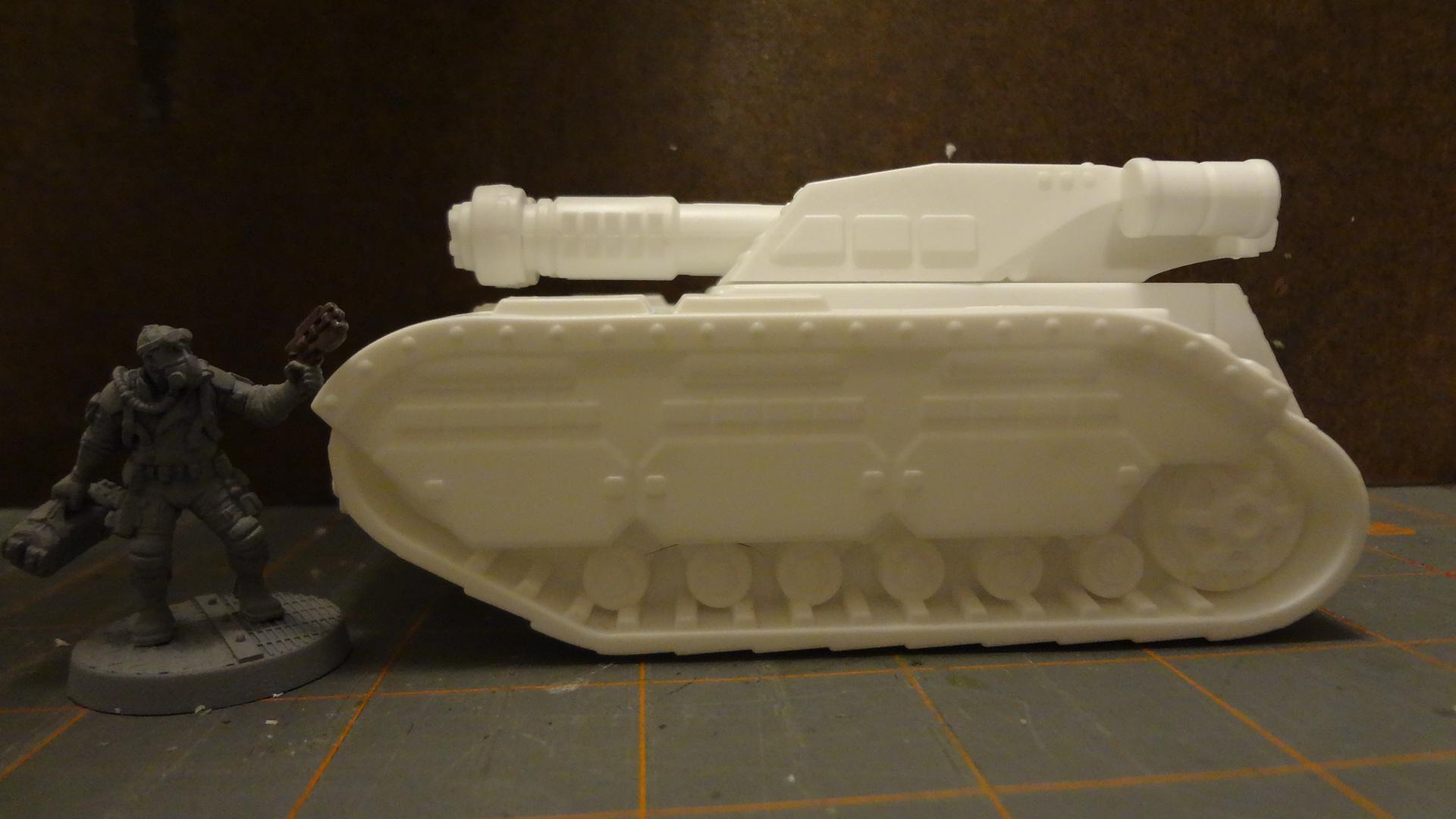 And here's a similar version, but this time with a rack of missiles, some comms gear and the bulldozer front. 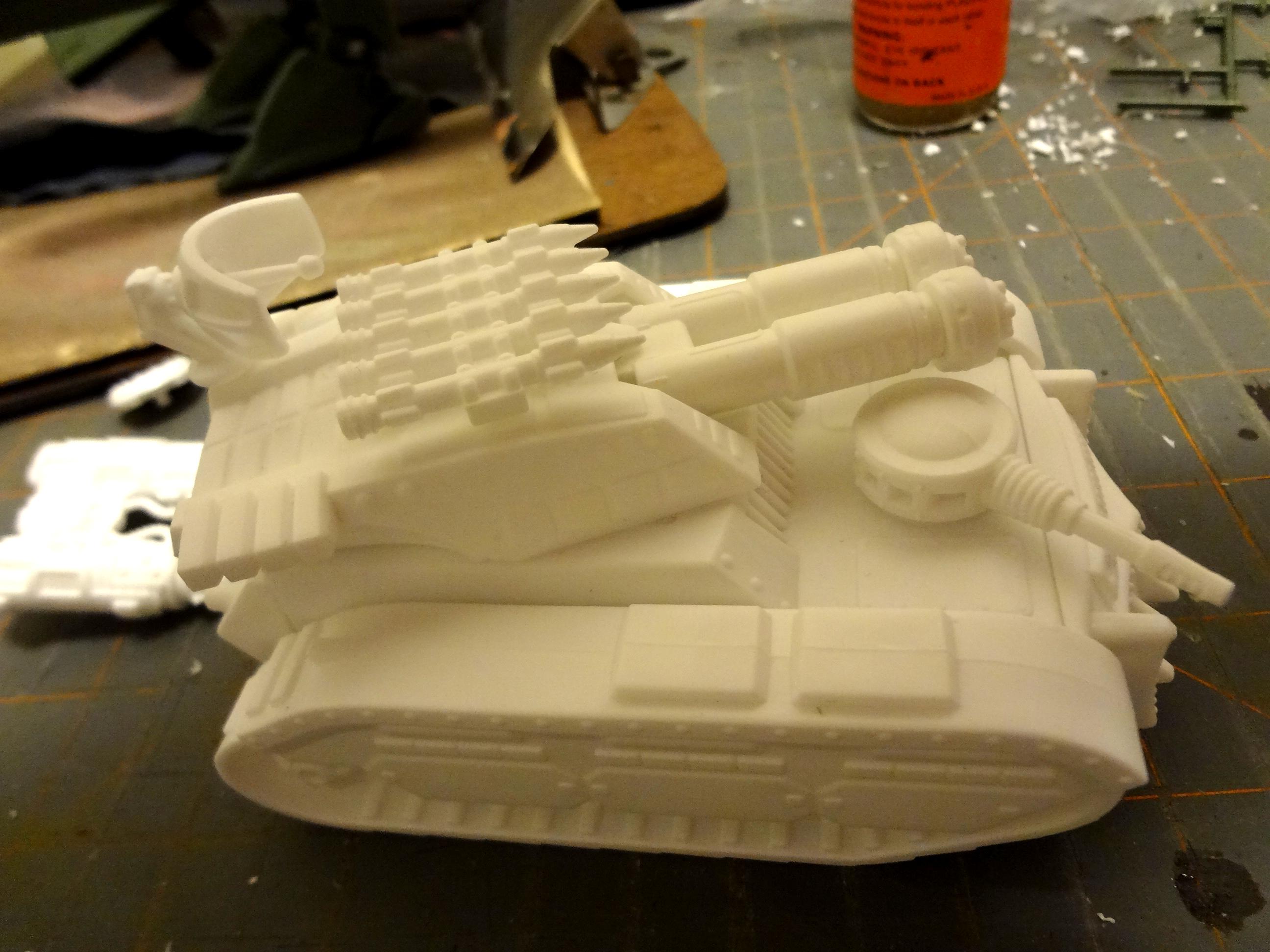 Reversing the hull to put the lower section in the rear and the dozer front gives it a bit more of a 40k look.

And don't think that main battle tanks are the only thing this kit does. Lose the main turret and you've got a nice little armored personnel carrier. 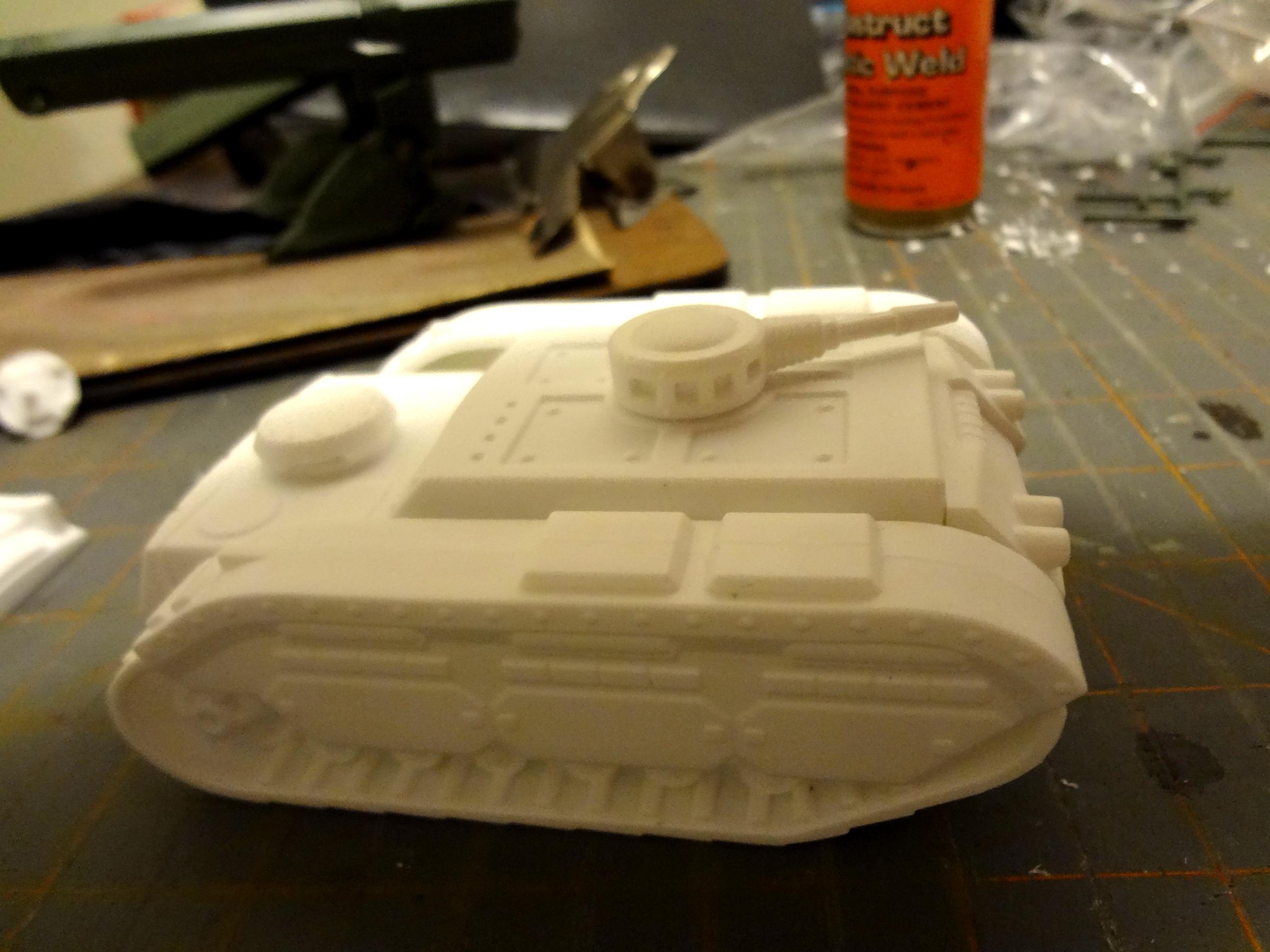 Though this isn't bad either. 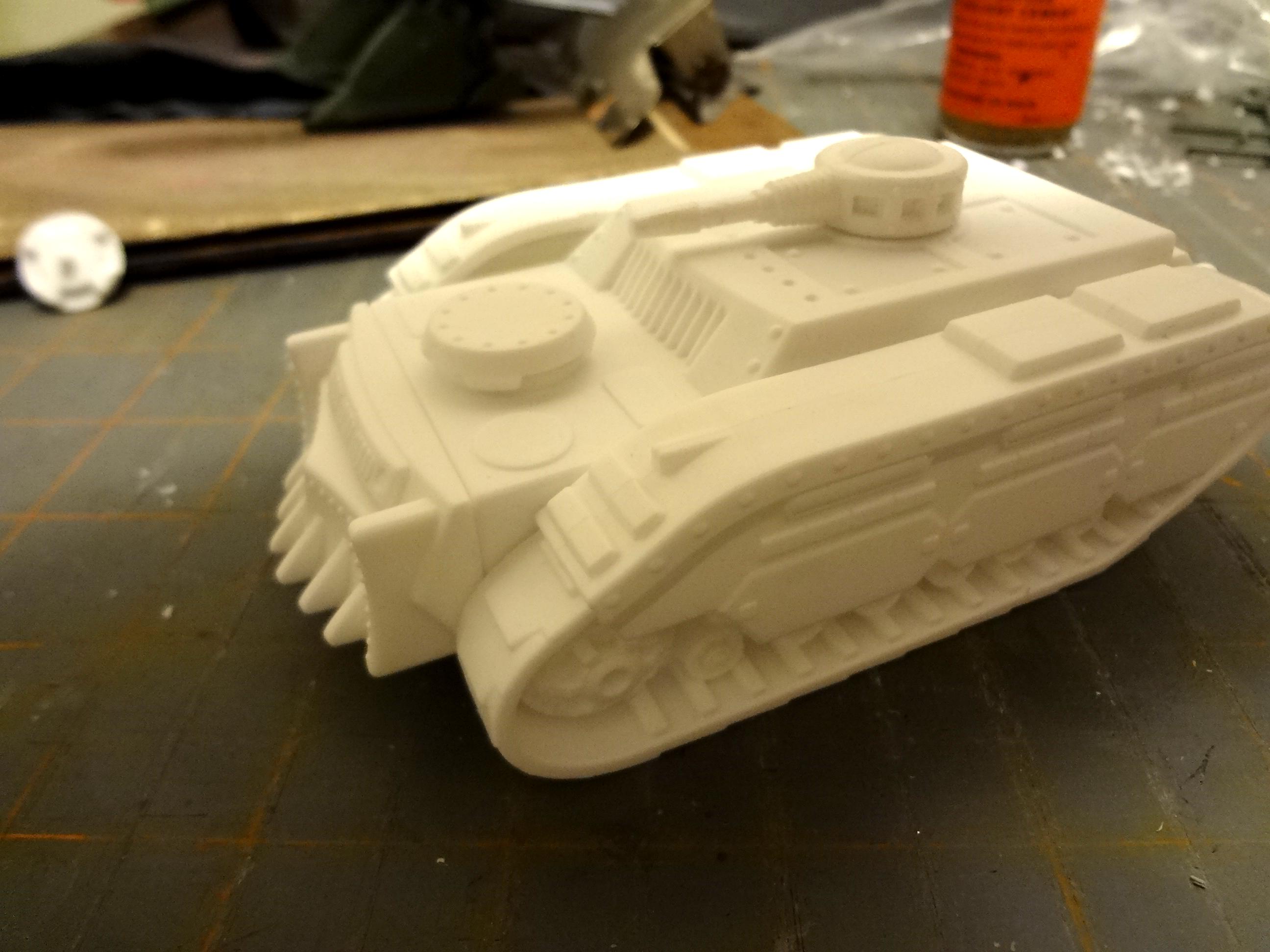 Add the big missiles and you've got a missile carrier. 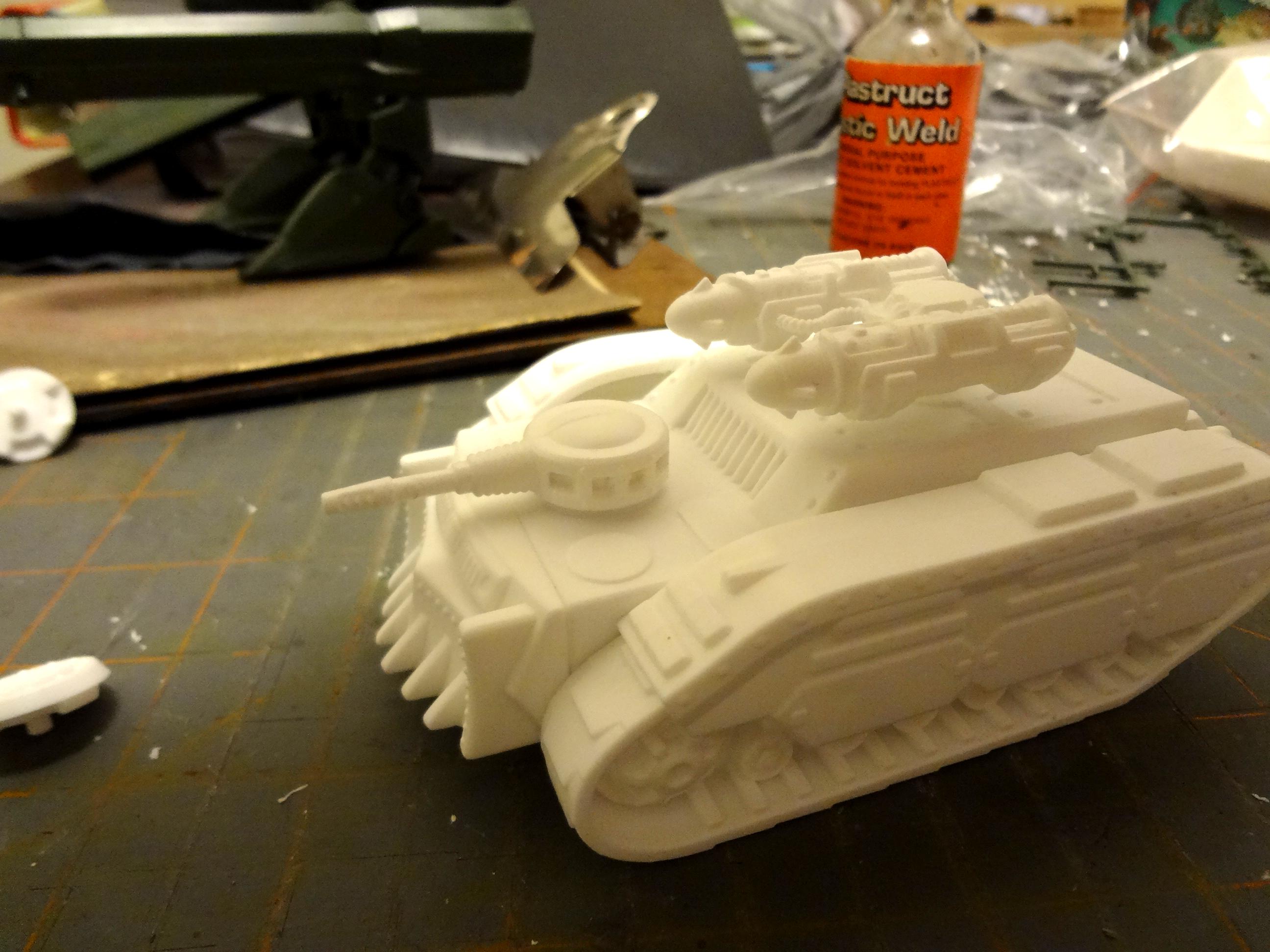 Stacking two of these missile pairs on top of each other could cool too.

For use with my 28mm Mech Attack games, I'll probably go with this simple configuration: raised hull, single main gun. 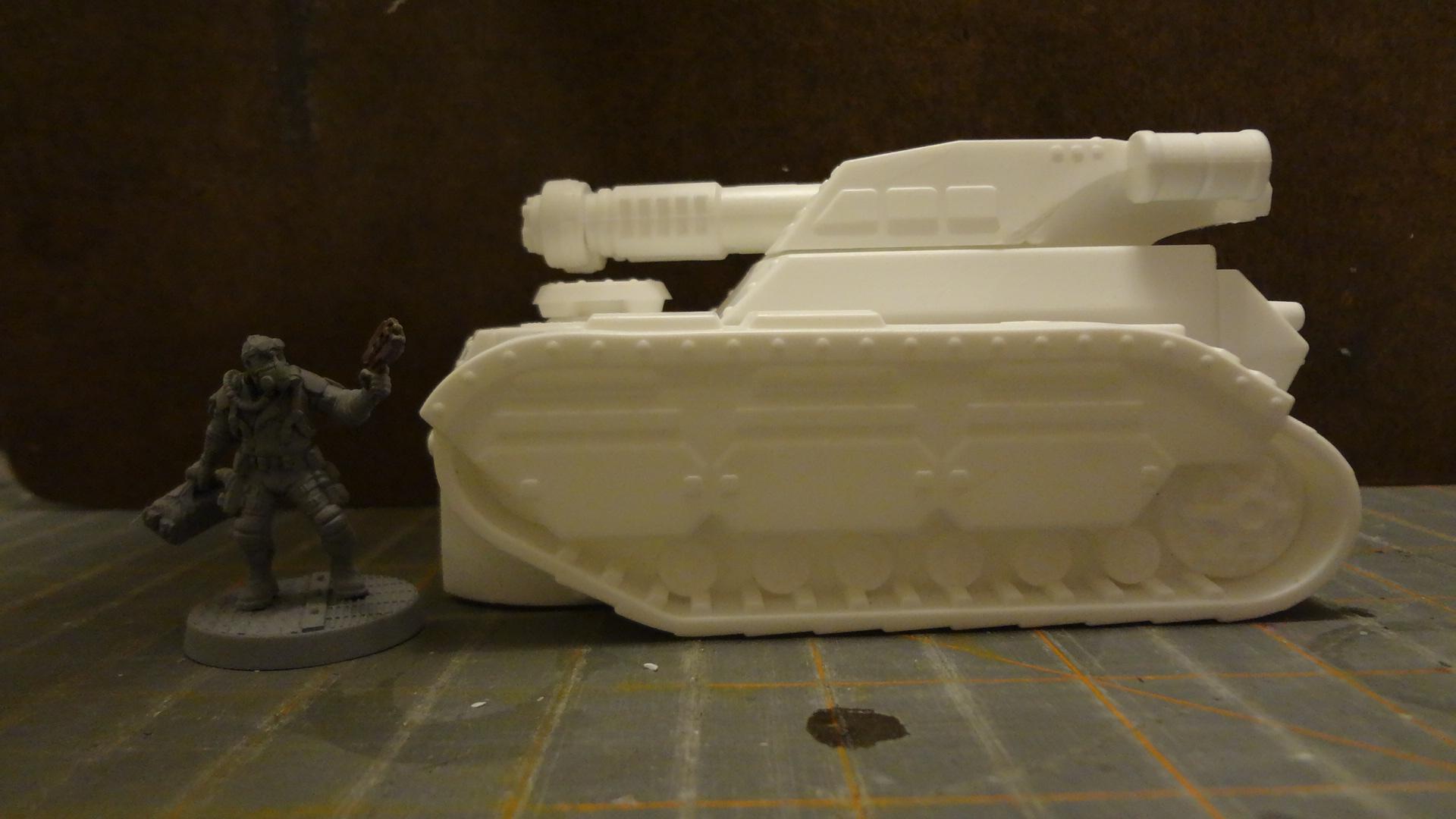 Though not intended for 40k, I'll probably put a Space Marine tank hatch on top of the turret, as it has nice detailing (and I've got a bunch in the bits bin).

No matter how you assemble yours, you'll end up with a batch of great parts for converting other vehicles. Here's a use for the second set of muzzles. They look like rocket pods rather than gun muzzles so that's what I used them for. 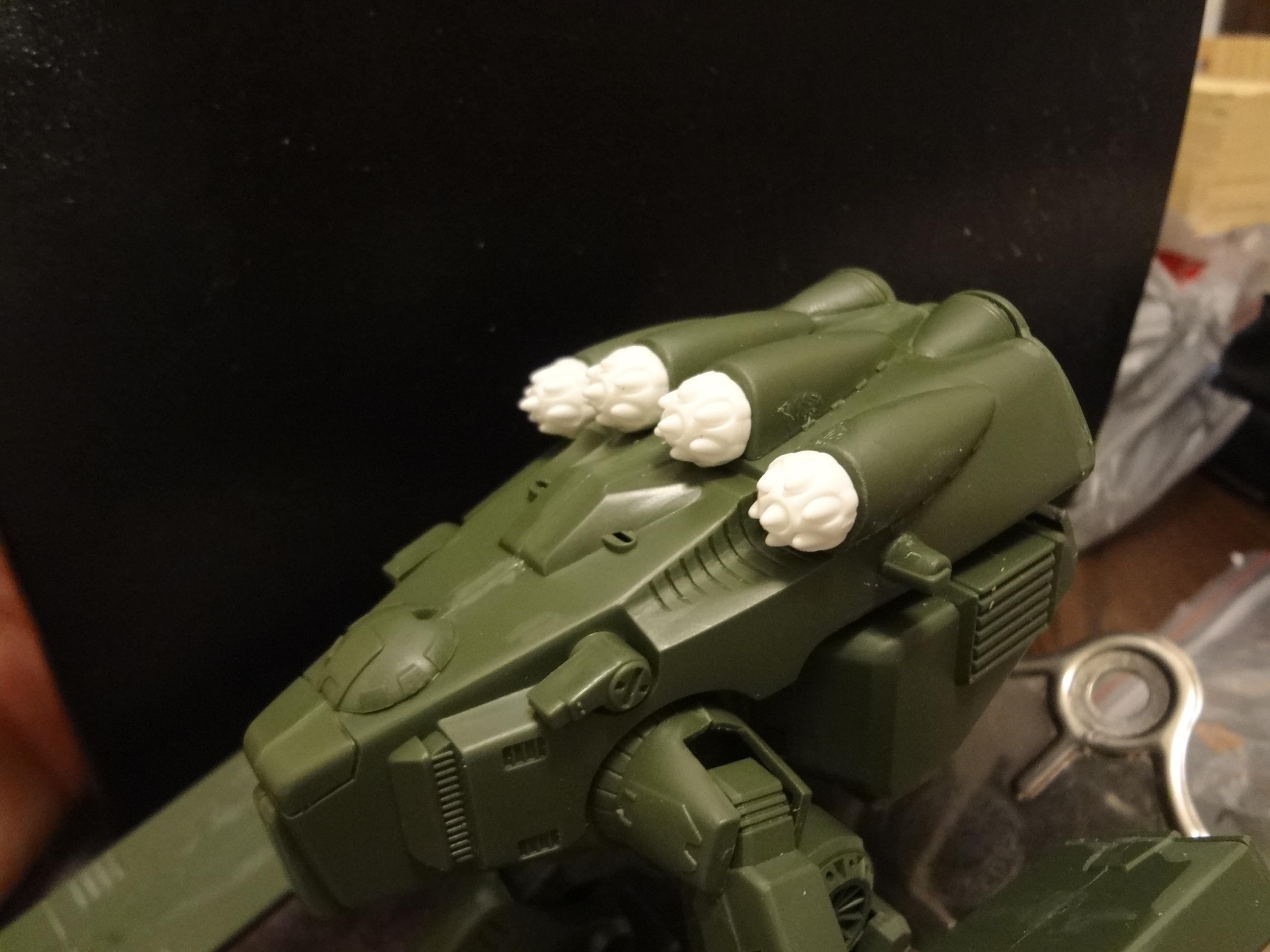 This "Destroid Monster" kit had four ridiculously long cannons, but I removed them and glued the rocket pods in their place. Macross fans will likely disagree, but I think it's an improvement.

Final Assessment
There is no other sci-fi tank kit in this price range with this kind of quality and usefulness. It's not a perfect kit, but the few flaws are easy to remedy or ignore. The sheer number of options in the kit means that gamers of many stripes should be able to find a use for it on their battlefield.

The size of the model suggests a light or medium tank, but who can say how big a tank will have to be in the future?

I heartily recommend this kit to anyone who wants some armor and doesn't want to spend a lot of money.

Lastly, I also encourage you to check out this review on Dakka Dakka, which inspired me to write this post. Most notably, it also has comparisons with Space Marine tanks.