Adepticon 2015: Fistful of Seamen and the Adventure of HMS Titan’s Uranus 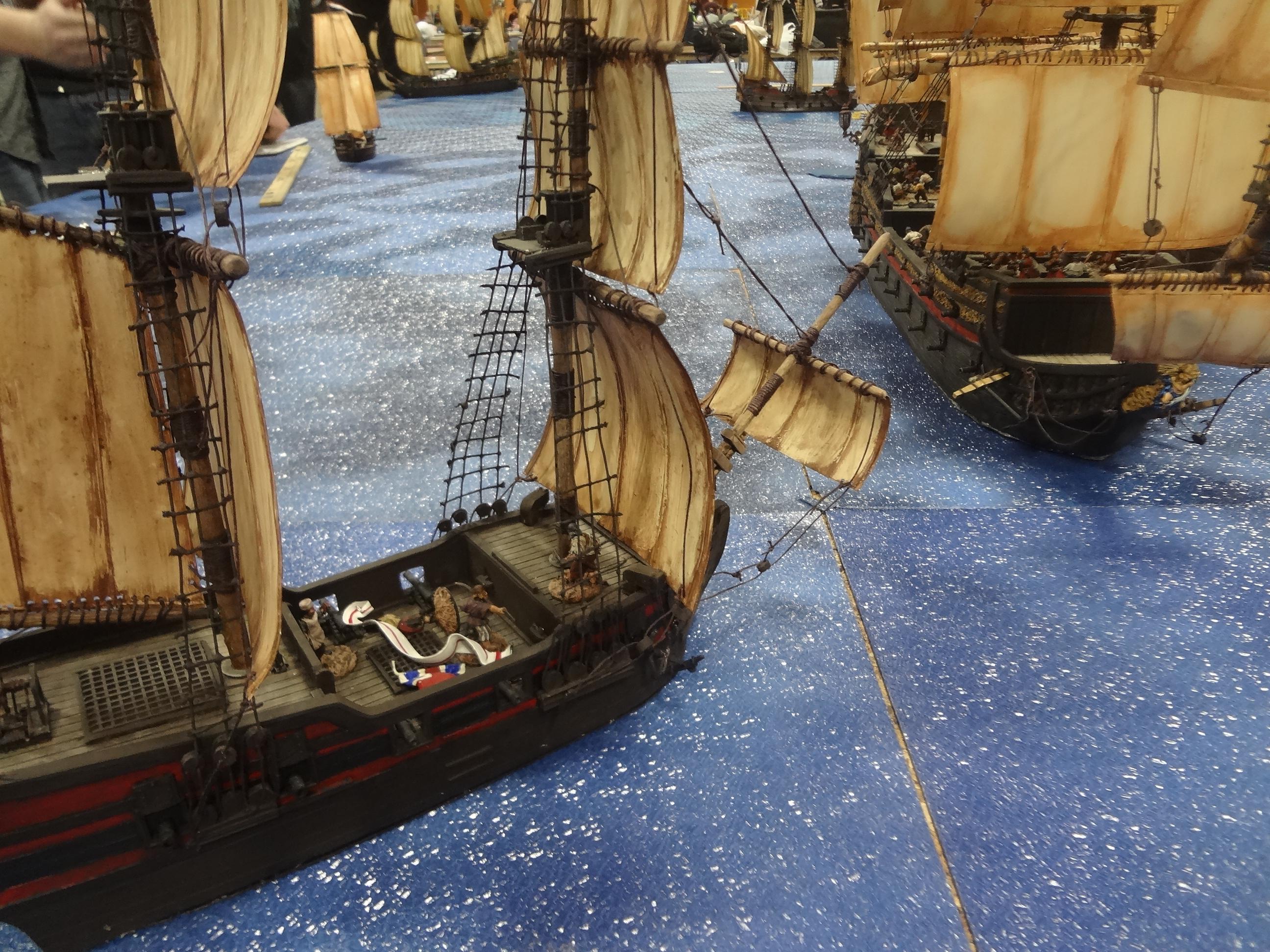 At Adepticon Tim and I participated in the Saturday night edition of this massive, colorfully-named "Fistful of Seamen" (FoS) swashbuckling and sailing game.

Easily the largest game I've ever been a part of, this massive game spanned a half-dozen tables, a few dozen ships and what appeared to be 50-plus participants. 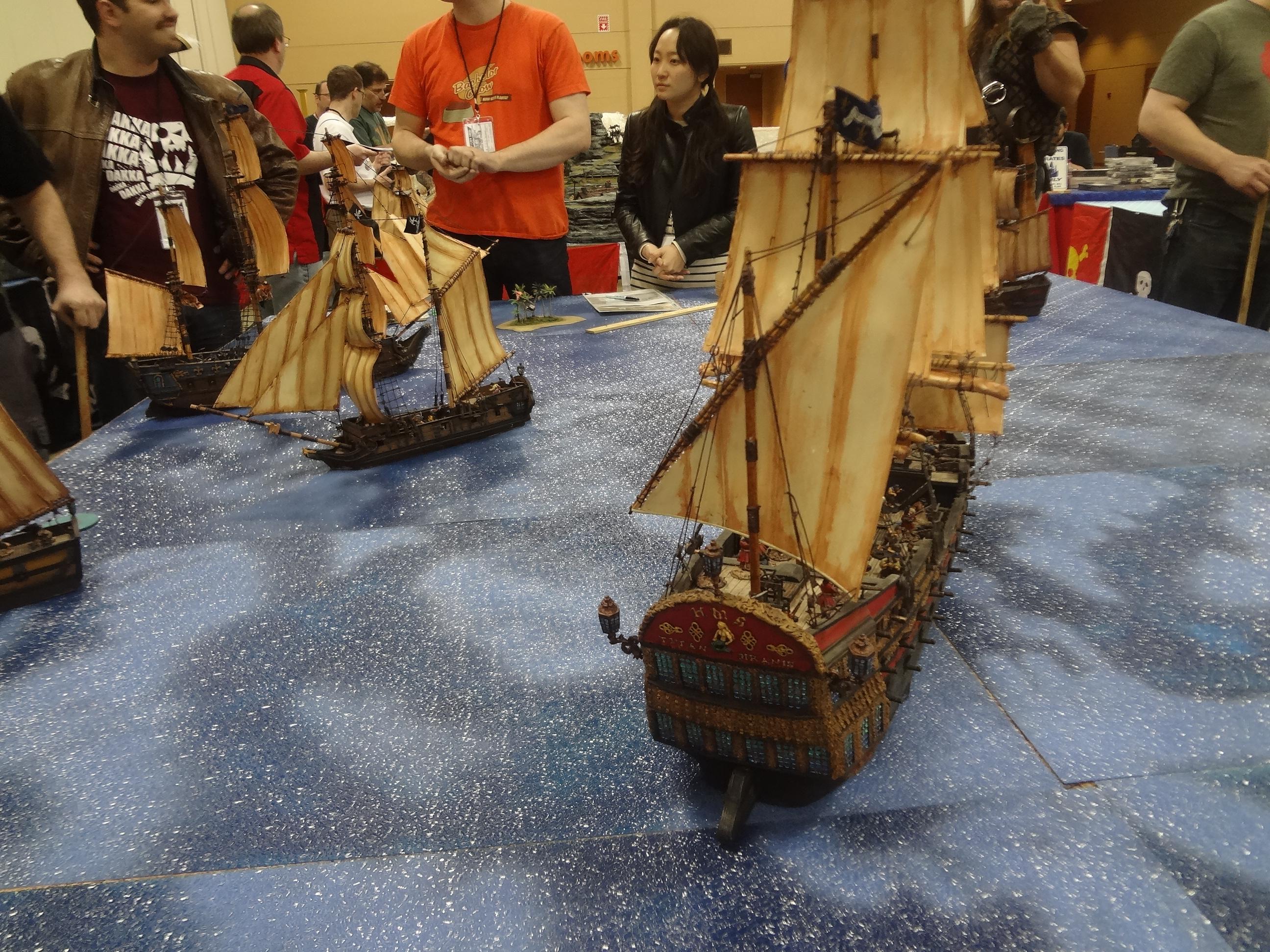 We had spoken with some of the gamemasters (all of whom appeared in suitable pirate garb) and looked at the terrain ahead of time, but our participation nearly didn't happen. Tickets were sold out, so we hung around the table as the event began and learned what we could. Nations in the game included the French, Dutch, English and Spanish. Players might be military, traders, privateers or pirates depending on what boat they selected. The number of ships available was dizzying. 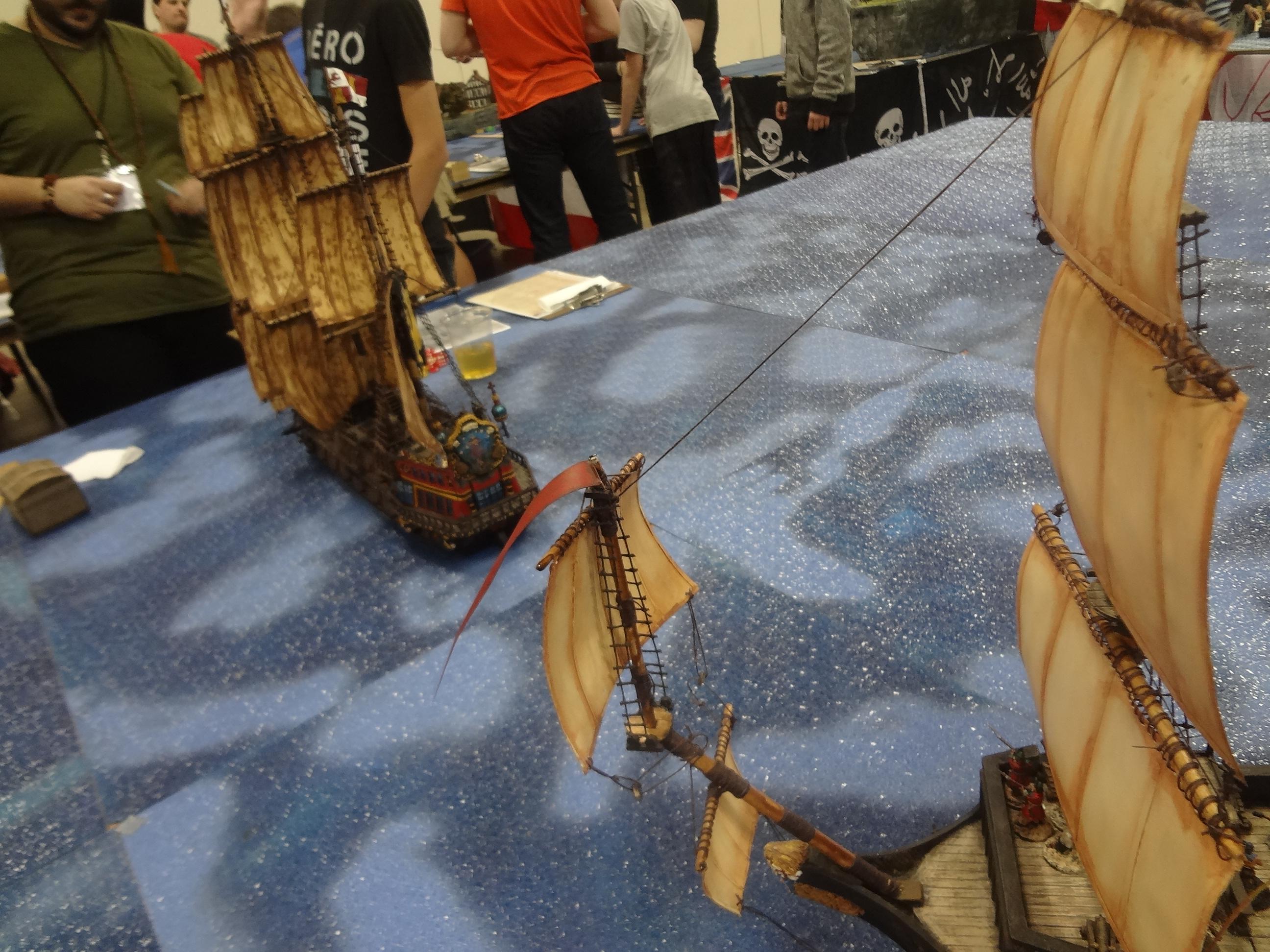 Luckily, captains who had participated the previous evening were allowed to select "First Mates" from the unwashed masses. Admiral D. was kind enough to pick Tim and me, and we joined him as crew on the HMS Titan's Uranus (I kid you not) hereafter referred to as the Titan. This massive 5-master was the crown of the English fleet and the largest ship in the game. 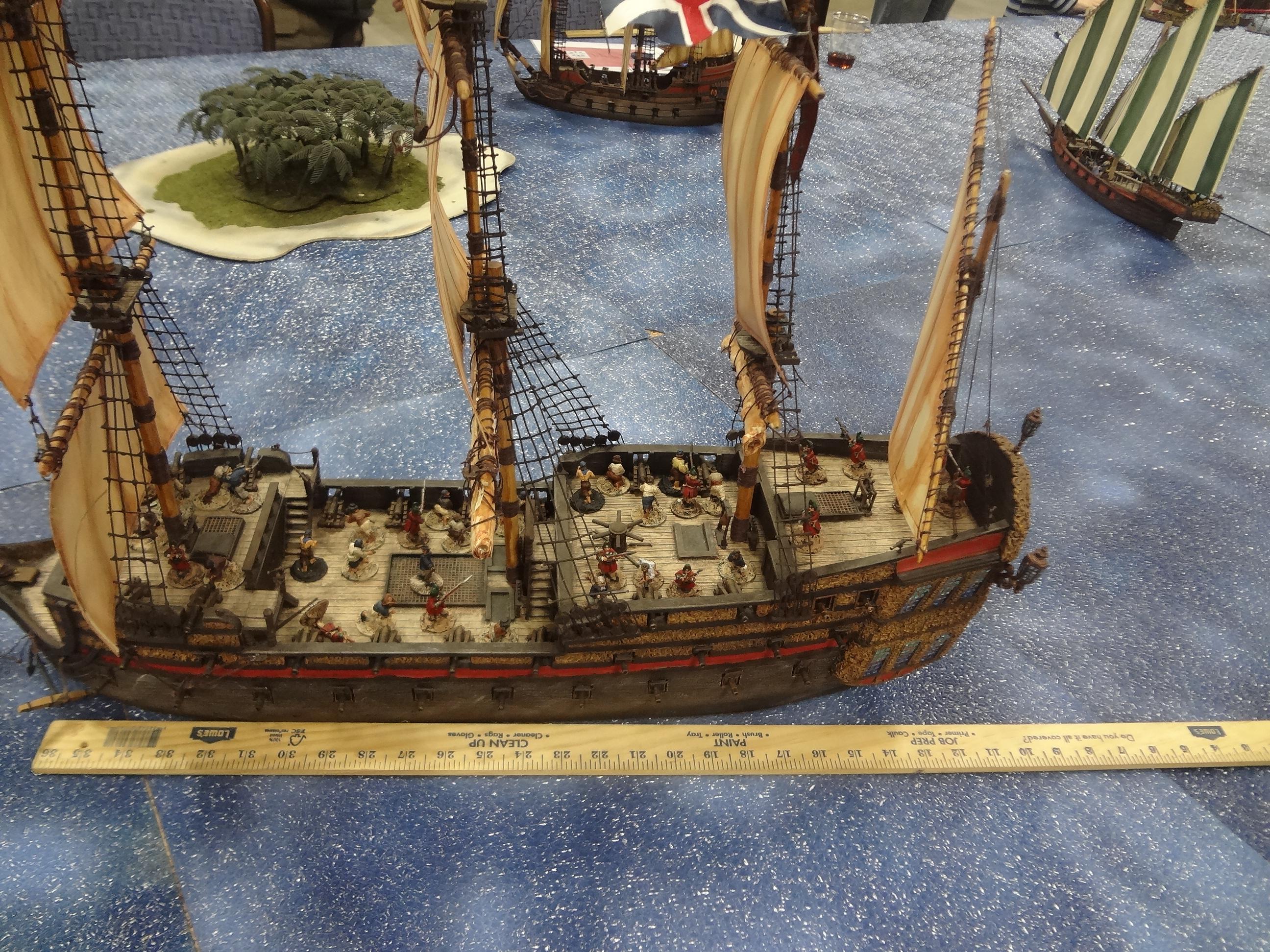 To attempt to report on the entire game would have been madness, but the beauty of FoS is that each ship essentially plays out its own adventure as it interacts with the other players and the various features of the game. So we'll just follow the Titan's adventures.

As soon as the game began, we left the English port and began to sail across the board escorting a trio of smaller schooners and traders. No sooner had we reached the open sea then we were set upon by the Marseille. The vessel was the pride of the French navy and nearly matched our own size.

We bravely placed ourselves between the raider and our charges, allowing them to slip away. Despite it being a time of peace, the brash French captain declared that we mush strike colors, raise the French flag and join his fleet. We replied with appropriate scorn and righteous indignation. 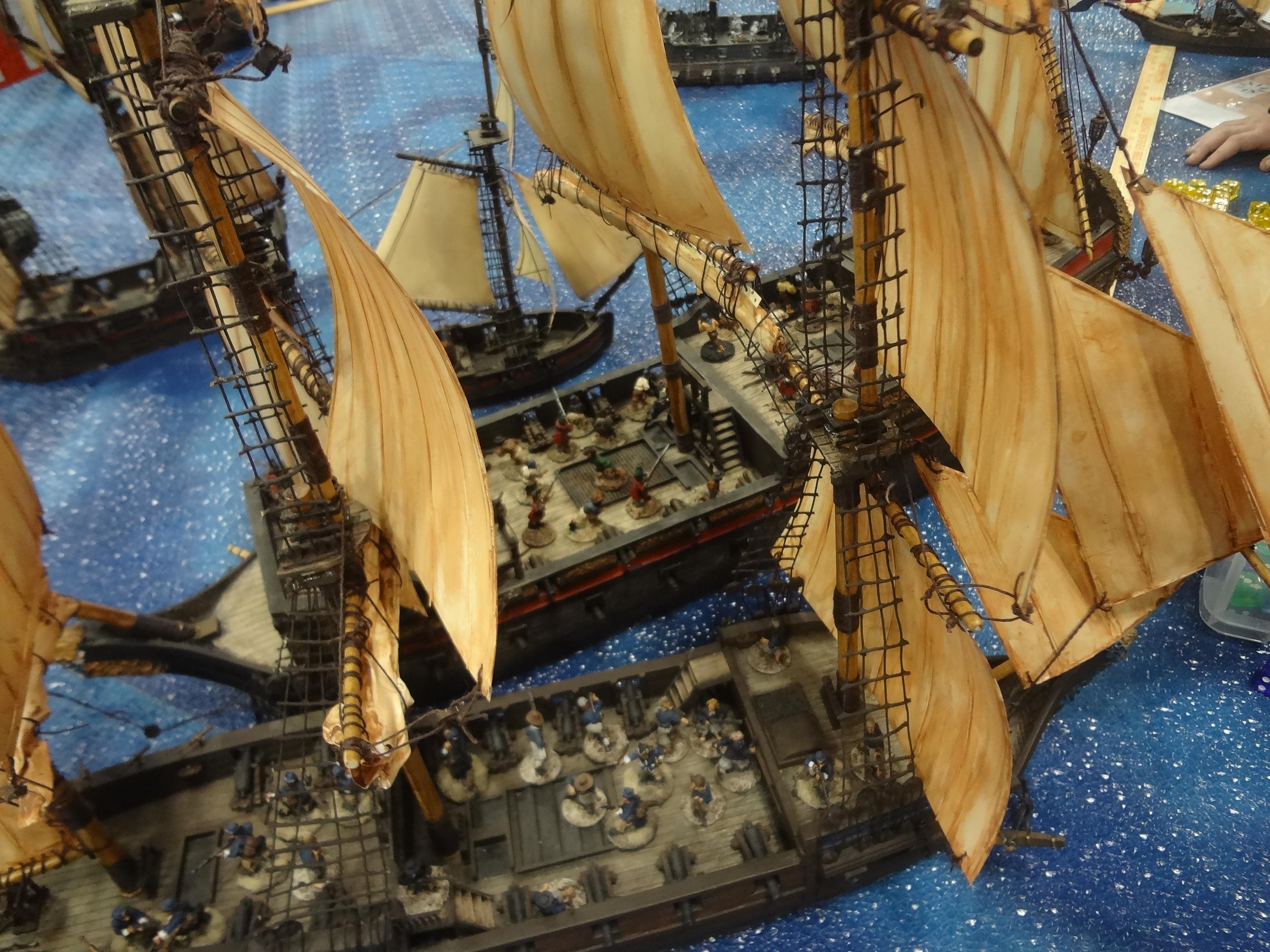 The ships closed quickly and brutal deck-to-deck combat ensued. After taking a significant casualties, our crew surrendered. Admiral D. was taken onto the Marseille, and the first mate of the Marseille became our new captain. Under her command, we sailed on to the French island for repairs and re-crewing, but upon arrival a surprise was waiting for us. 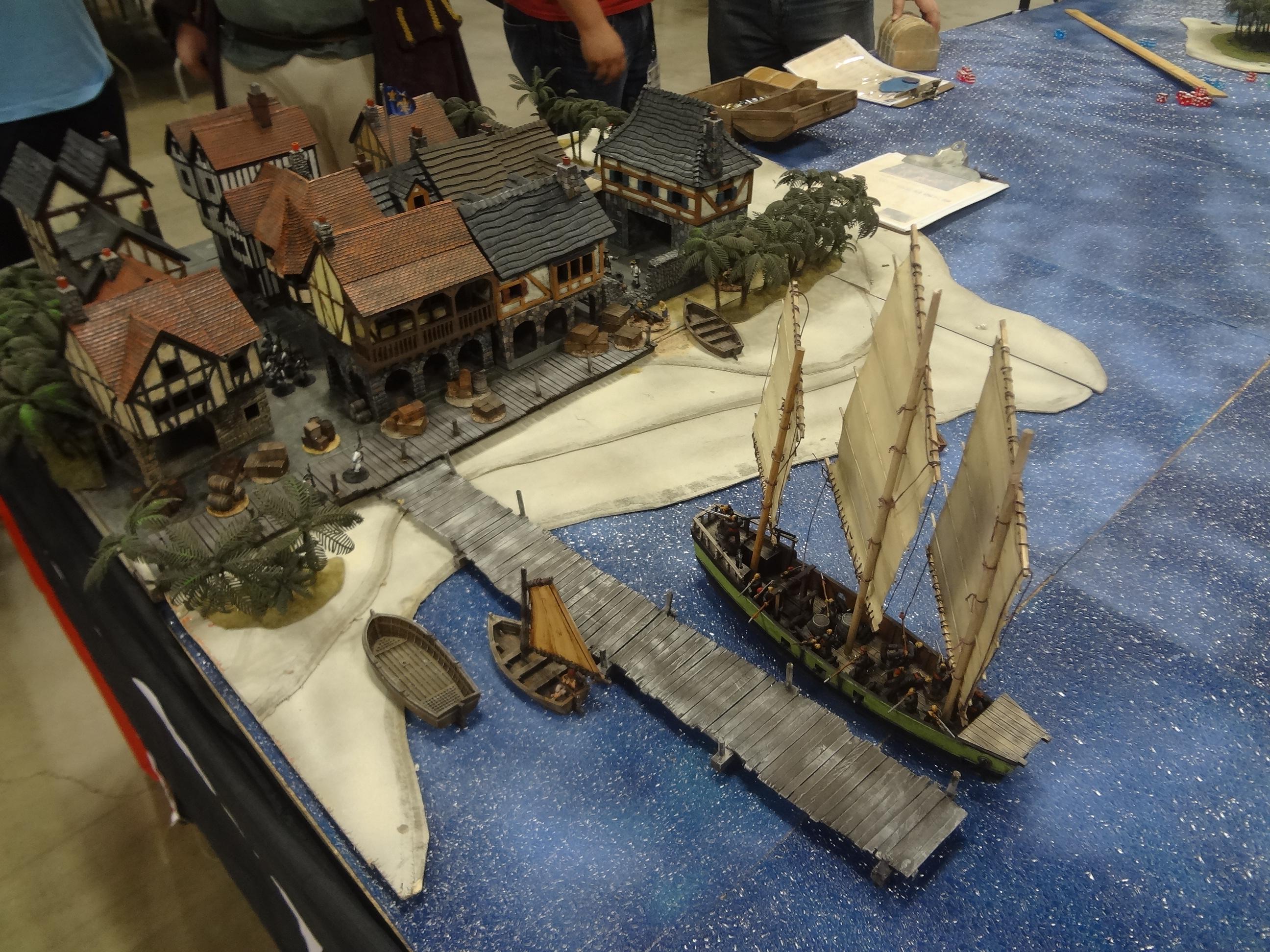 As we sailed into the port, the French Governor immediately stated his intention to seize or destroy our ship. As we had been taken in a time of peace, its seizure was considered an act of piracy. Seeking to avoid a diplomatic incident, the Governor was prepared to try the entire crew as pirates.

We begged the Governor's favor and explained that we had been brought under duress and would willingly hand over the rebel French captain. The Governor agreed. I dueled our French captain for command and she was defeated. We handed her over to the Governor to be hung for piracy and bringing dishonor to the name of France. Though given no refit, we were encouraged to raise our original English flag and leave the island post-haste. 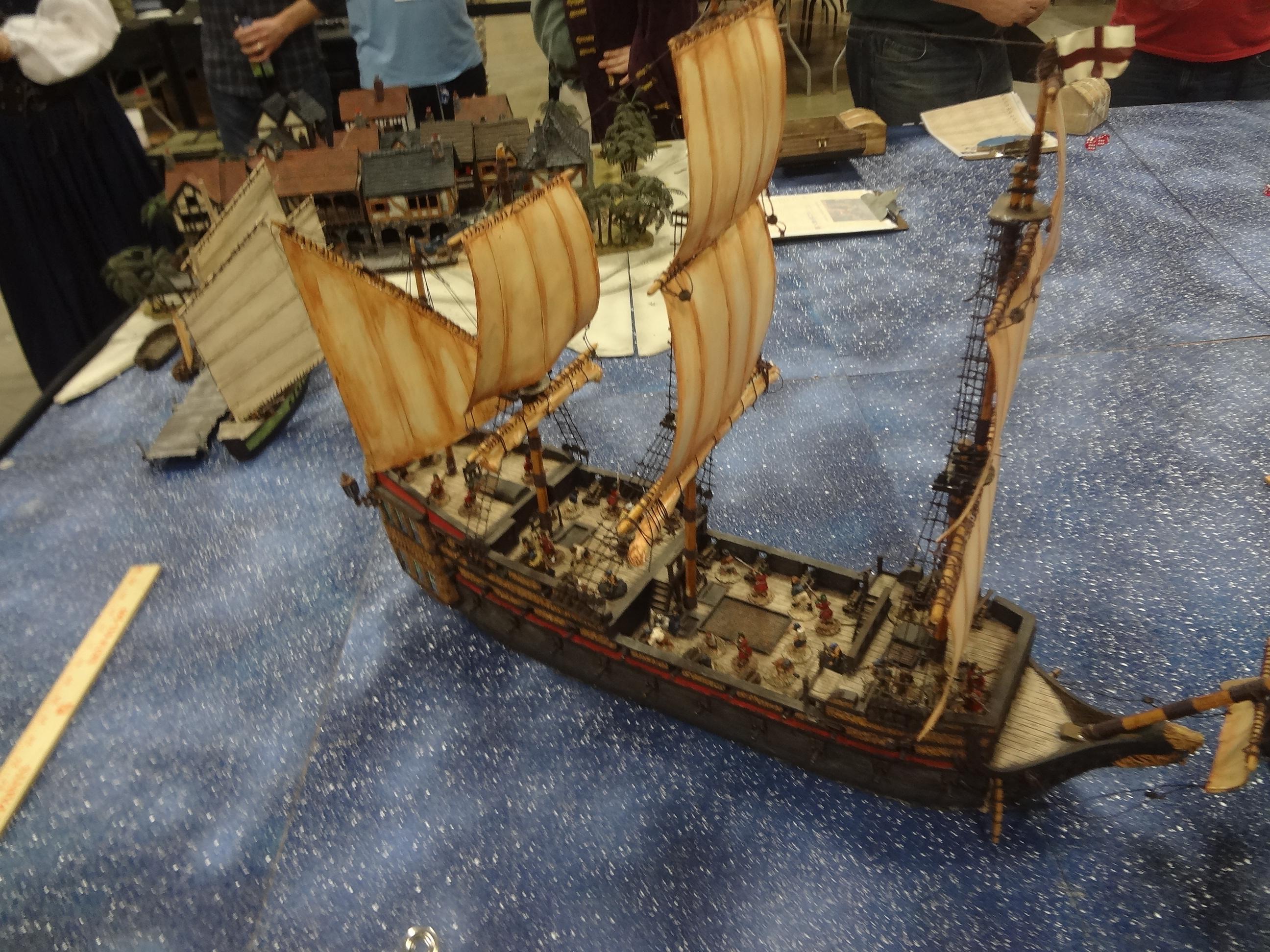 Thus we found ourselves somehow in command of one of the most fearsome ships on the sea. We set off again across the sea, heading back toward the English island. Spain had recently declared war on the English and on the way, we briefly skirmished with a Spanish galleon. 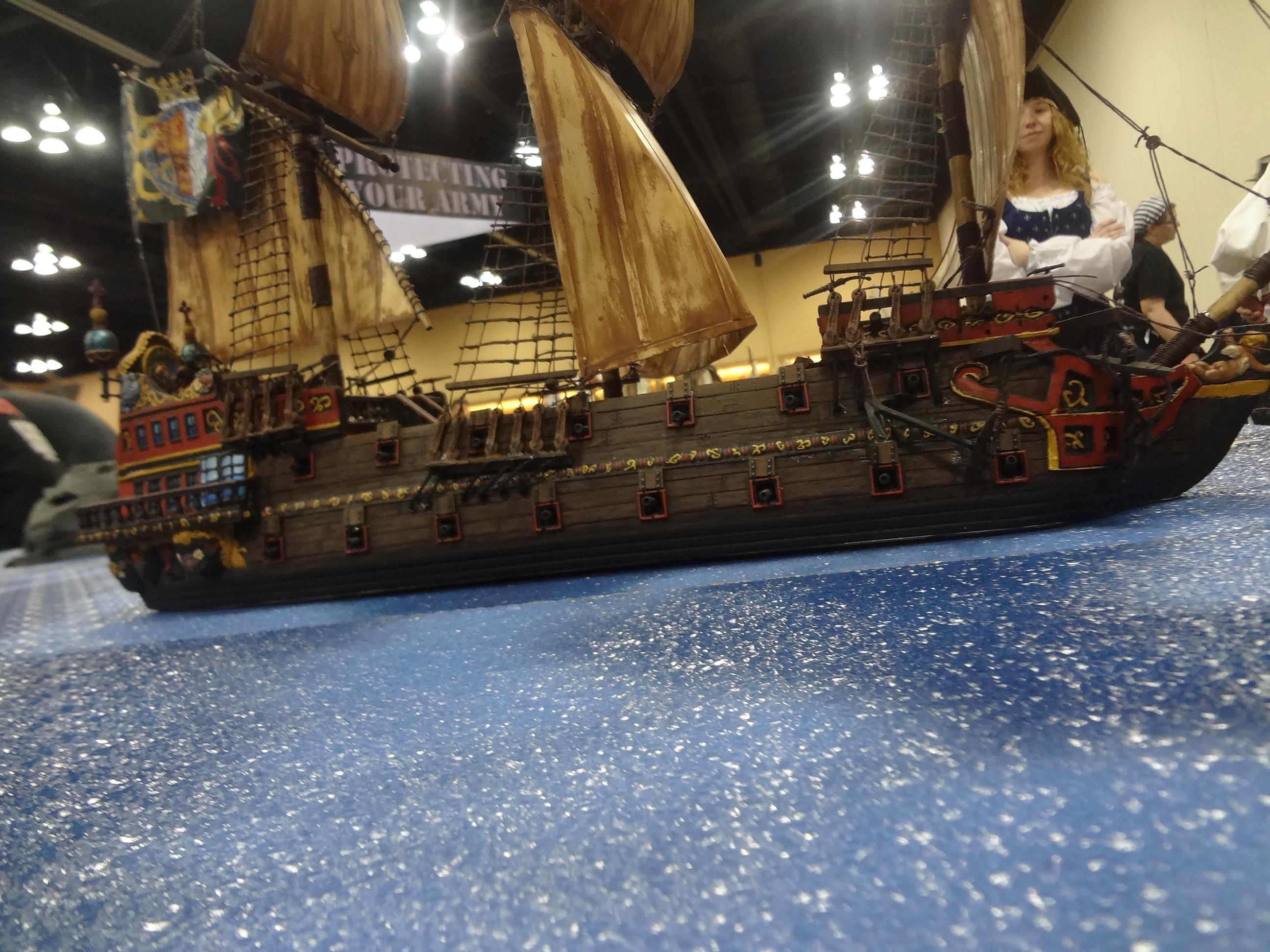 However, our swifter craft safely made it home in time to leisurely watch the papist galleon be mercilessly raked by the English island's artillery. 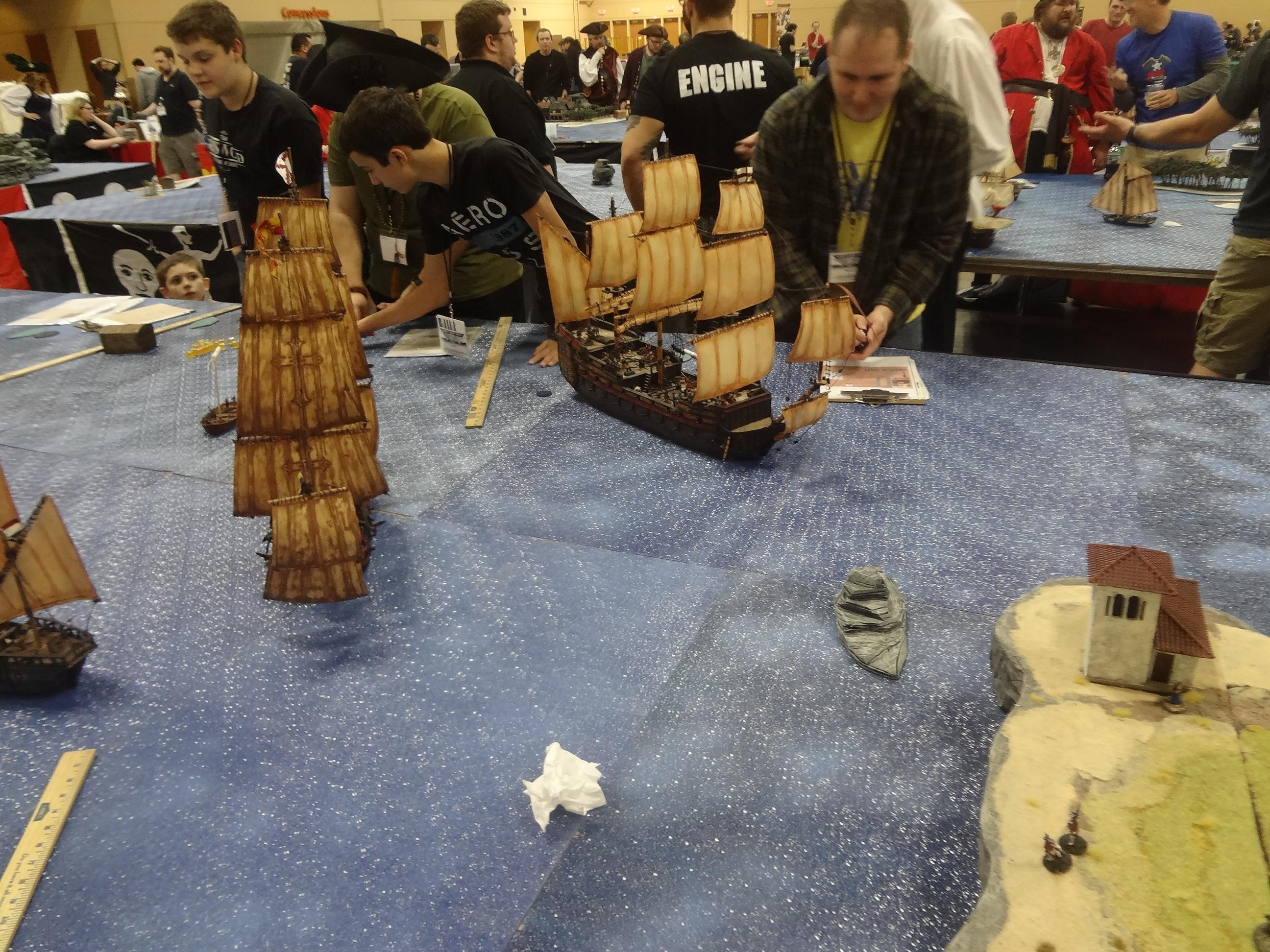 Having feared us lost, the Governor listened with rapt attention to our tale of battle, capture and return. After hearing our tale he heartily congratulated us and awarded us promotions in honor (the currency of the game for military units) and titles to lands.

Following a full refit and with a full crew we set out again on the open sea.
A minor skirmish with some pirates ensued. We were not capable of pursuing them into rocky shoals, so after a blistering broadside to demonstrate the seriousness of our position, we extorted a minor fee and let them go. 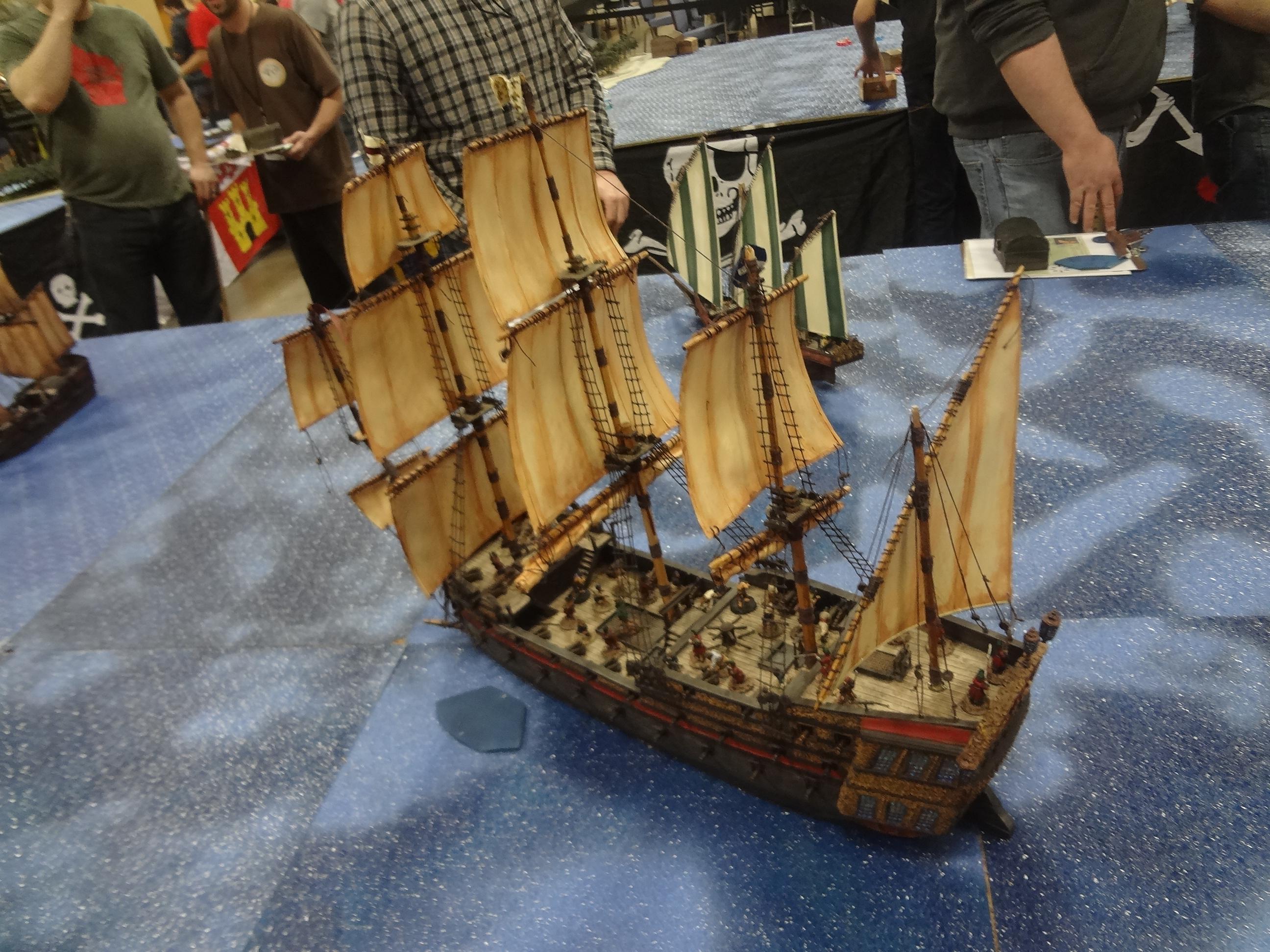 Returning to the French port again in peacetime, we paid some coin to learn the local news (the game allows for "buying" a random game event) and discovered that the Kraken had been sighted! With this disturbing news, we returned to blue water only to be set upon the feared and neigh-invincible Ghost Ship. 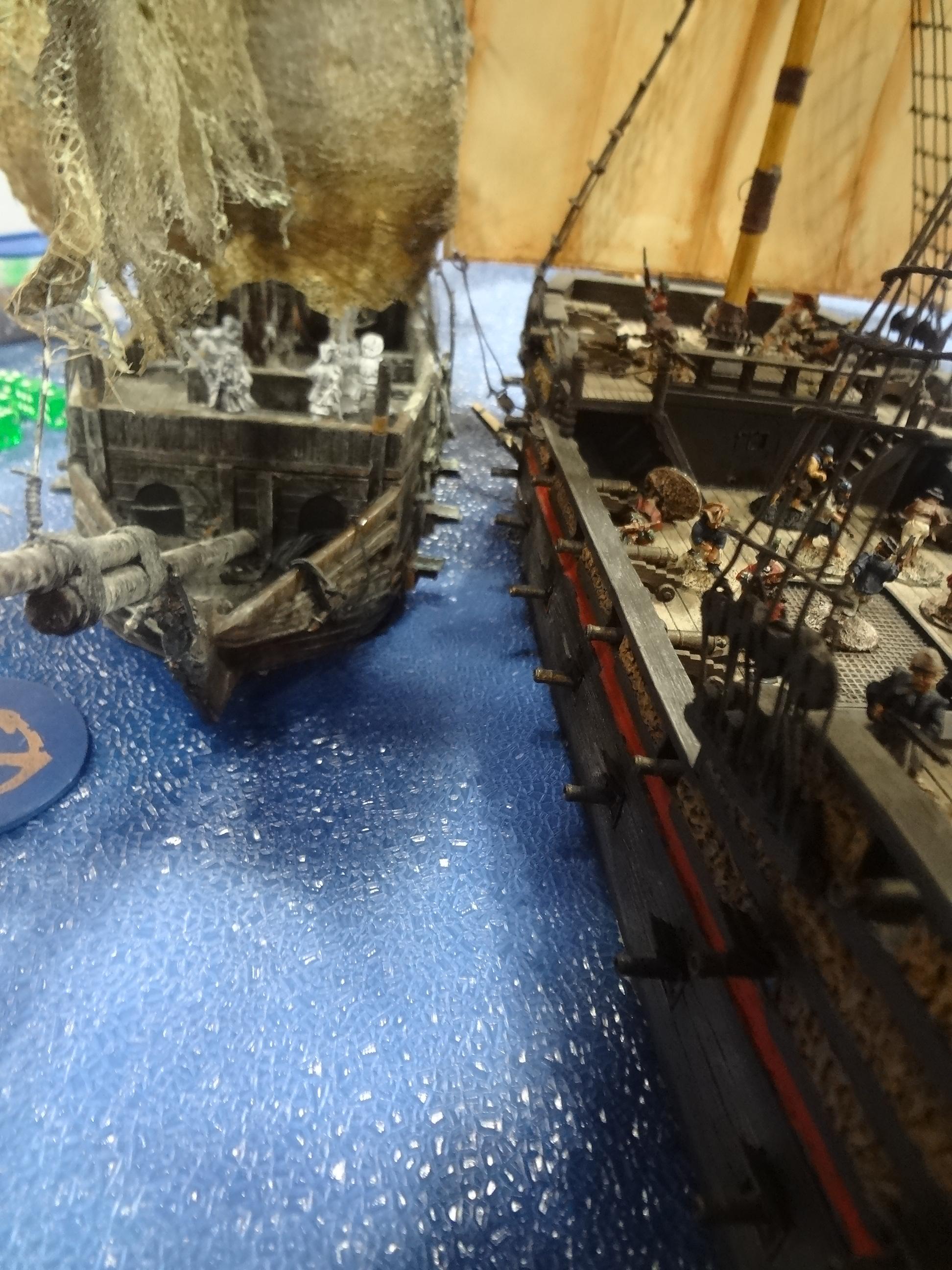 We reluctantly paid the Ghost Ship's tax and gave a tithe of his crew as souls to the feed the spectral vessel's terrible appetites. There was not time to ruminate on the fate of those poor devils, however. No sooner had we left the unholy vessel than we came across the Kraken! 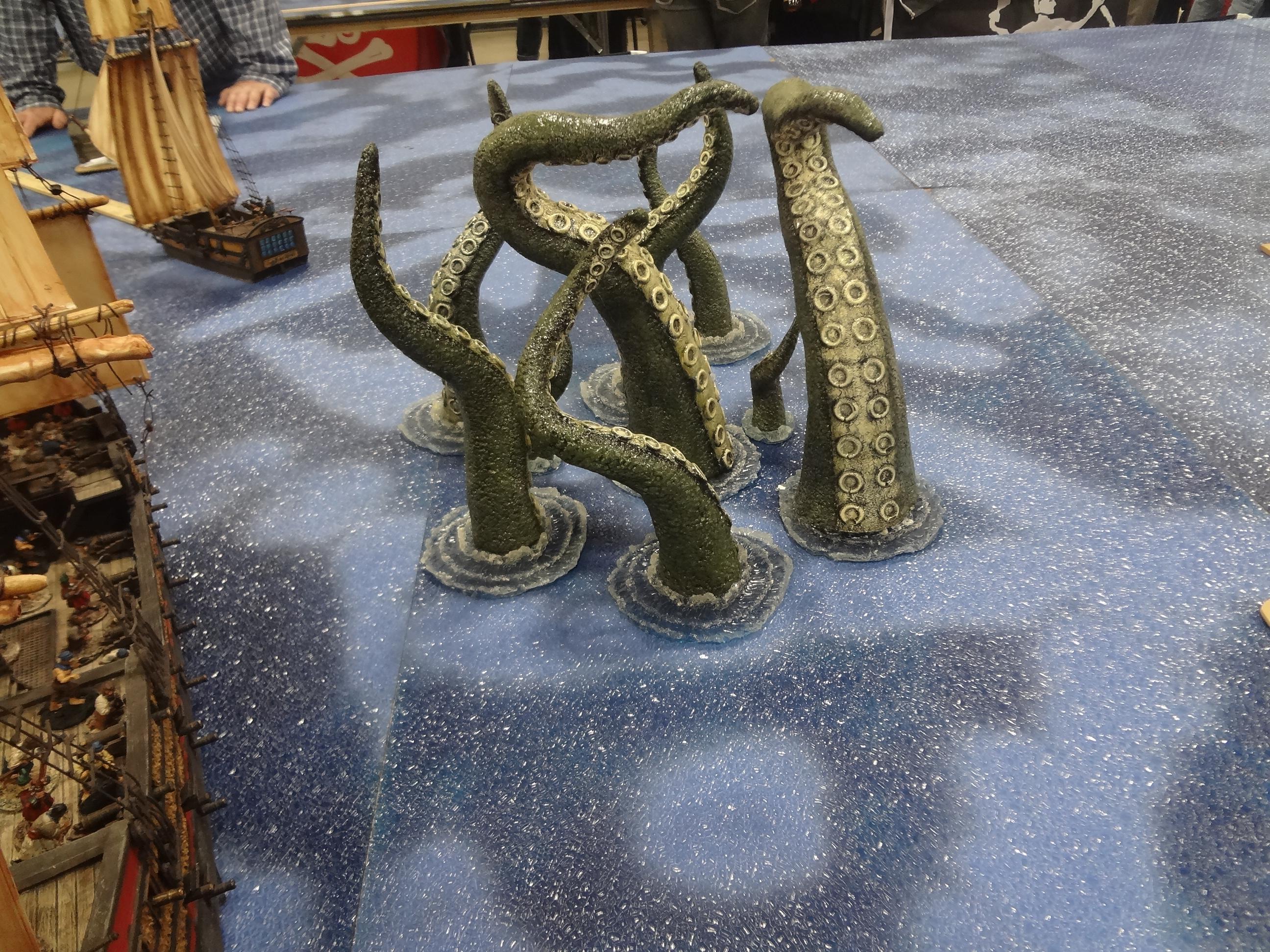 Fortunately for us, the legendary beast proved to not be as fearsome as its reputation. A few volleys set the monster back on its heels long enough for the Titan to sail away.

With our tour coming to an end (the game was nearing it's completion), the Titan at last returned to the English island to exchange the last of our deeds and gold into honor and lands. 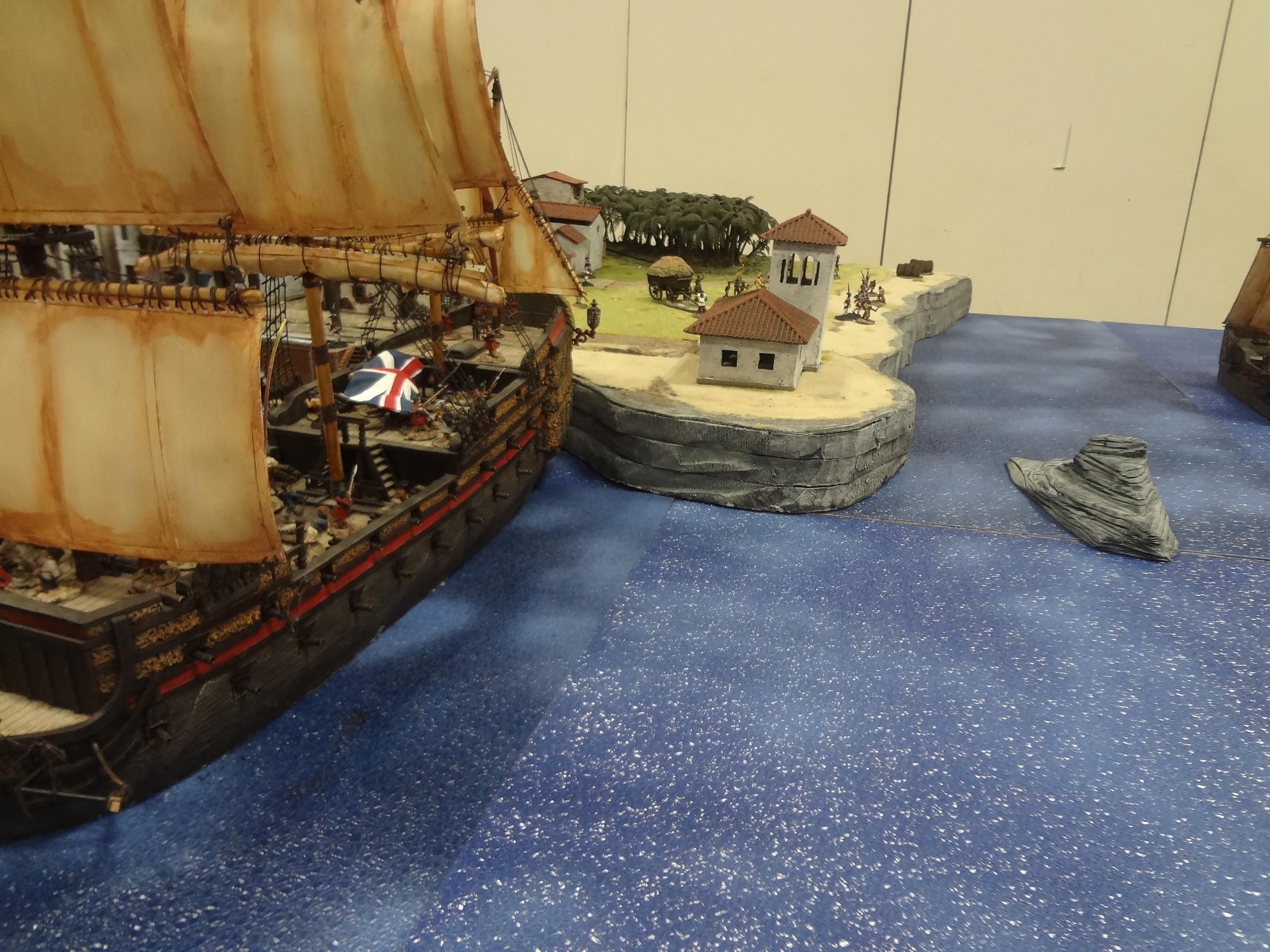 Our experience with FoS was a real pleasure. The ruleset was concise, and a dozen GMs were present to assist in combat resolution and clear up whatever complications might arise. I'm not usually a fan of systems that require writing down one's commands in advance, but I greatly enjoyed FoS's mechanics which required each captain to make two moves ahead during each turn. Tim thinks we could play it out with his small scale Uncharted Seas ships. 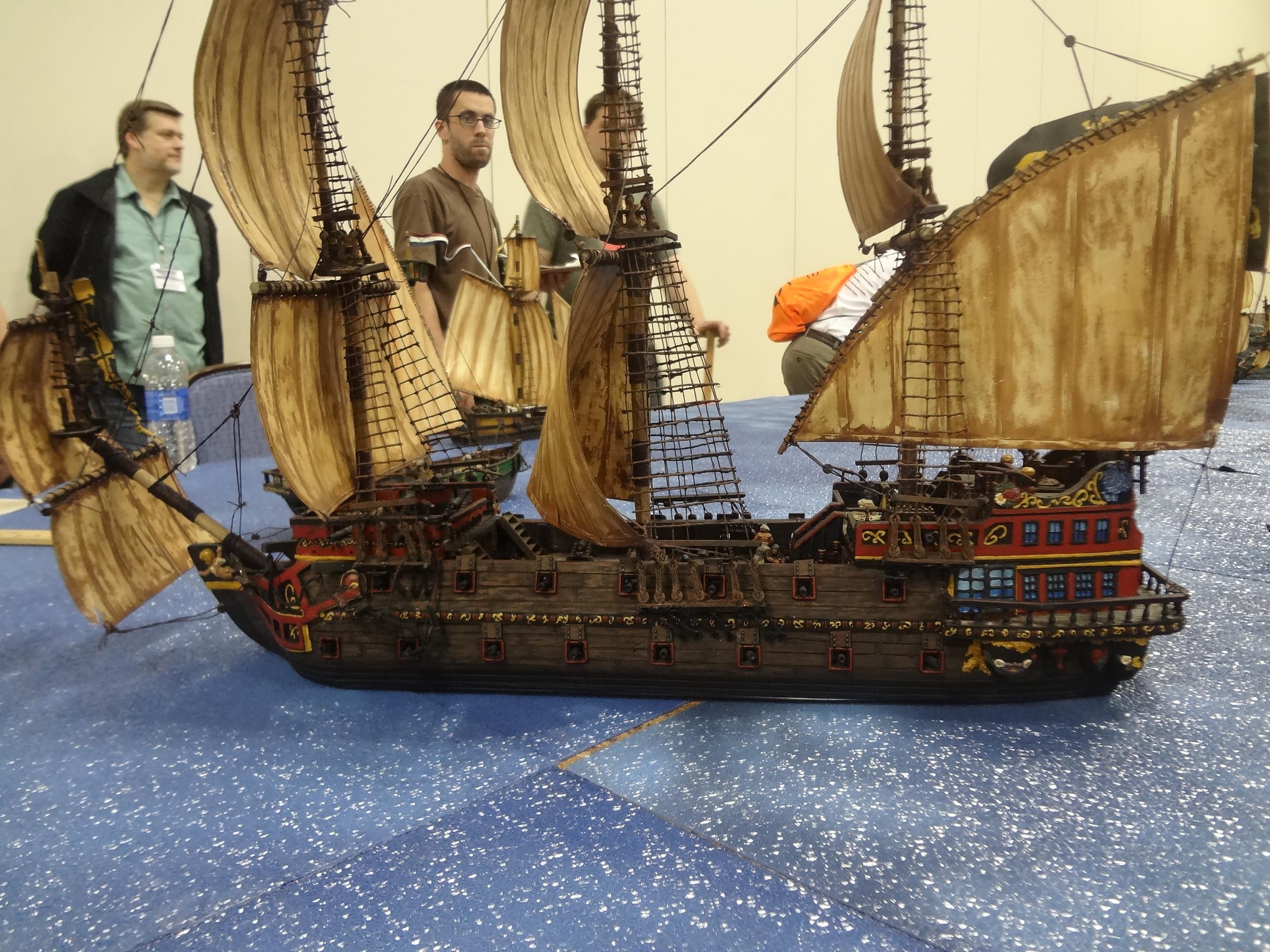 The ruleset as a whole seems to target fun as the highest priority, and it paid off handsomely. Though we supposedly had the most fearsome ship on the sea, brief contact with other captains showed that every ship seemed to be made to excel in a specific manner, such that no player's fun was handicapped by their vessel and some rather unassuming vessels were quite fearsome.

If the cheers at the post-game debrief were any indication, I suspect that every captain in the game could tell a tale as dramatic as ours. 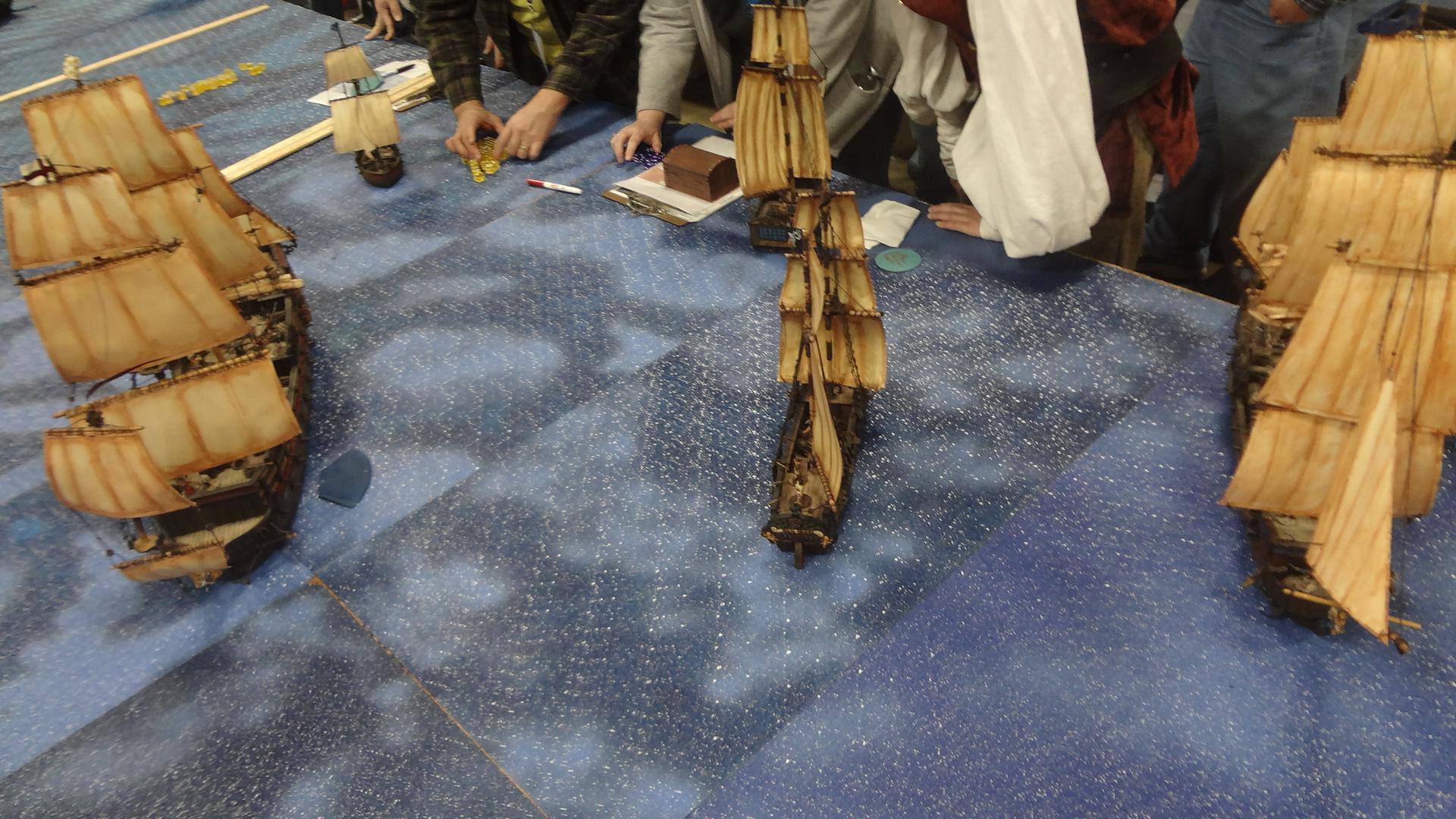 All in all, an excellent participation game and one that I would be pleased to play again. Most interestingly, this has created a small spark of interest in swashbuckling games, a genre I've never been interested in before. Definitely not something on my immediate radar, and certainly not an undertaking of this size, but maybe someday when I'm in need of a new gaming project I'll turn my eyes to the high seas.

6 responses to “Adepticon 2015: Fistful of Seamen and the Adventure of HMS Titan’s Uranus”