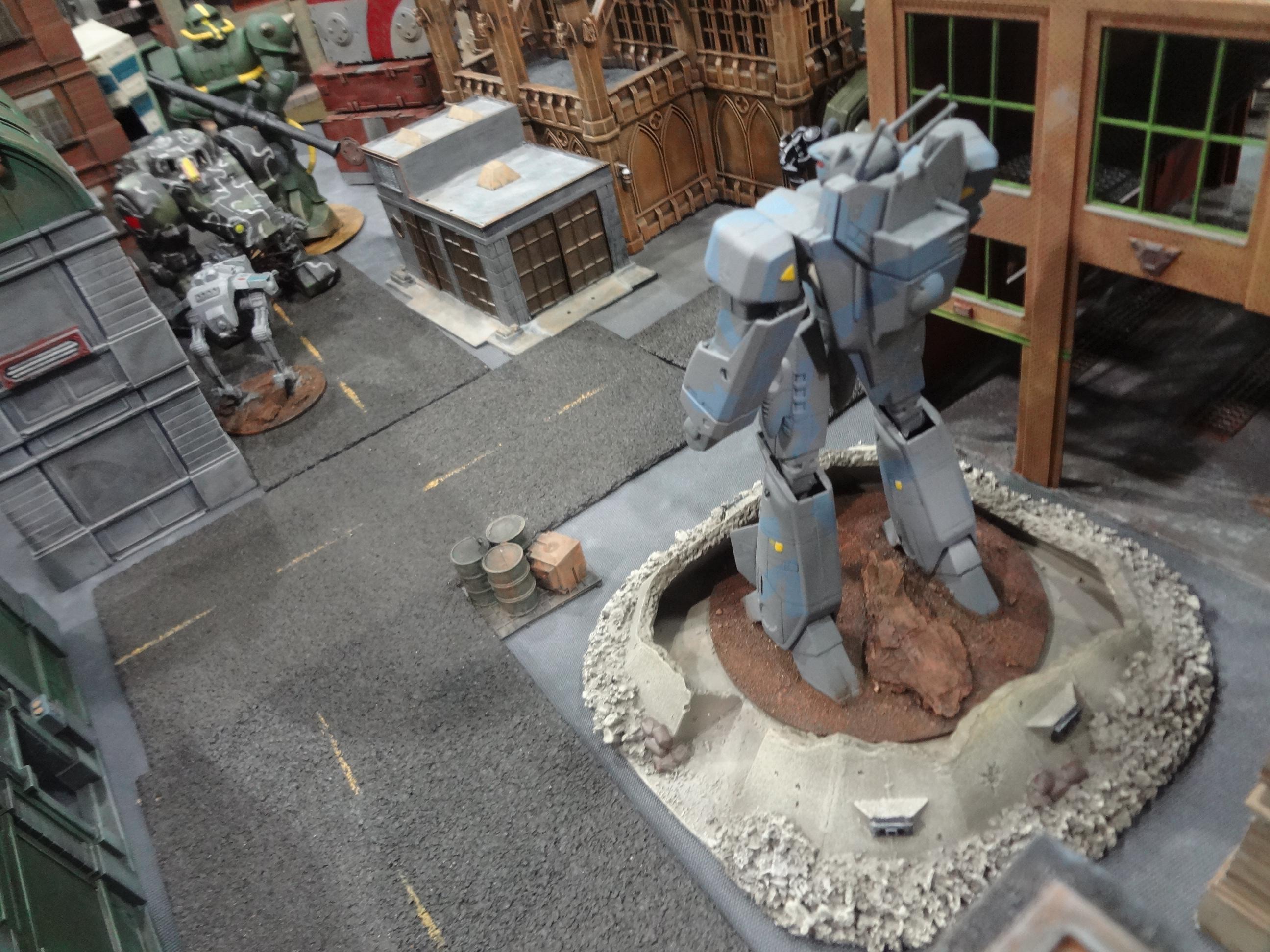 Last Saturday, Tim and I met up at Little Wars to run our 28mm Mech Attack game. This was our third year running the game at Little Wars, and Mike C. also stopped by to lend us some dice and hang out.

This was the same scenario that we ran at Adepticon last month, and to be honest I didn't record the event quite as well, so this report will be a bit shorter. Suffice to say the attackers' (green) goal was to earn 15 points by destroying defenders' (grey) pillboxes of varying point values. The defenders' goal was to hold them back until the end of the game or destroy them all. 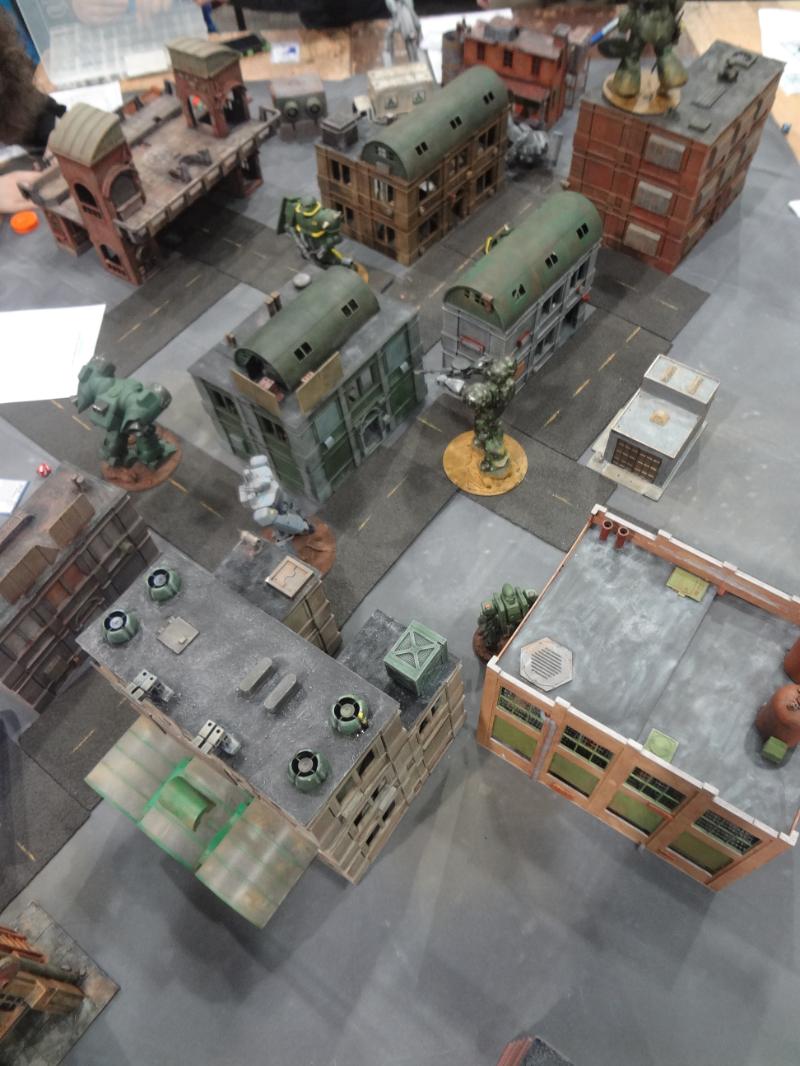 Even before the convention began, I knew we were off to a great start. Five of the eight spots were taken during preregistration a month before the convention. Even better, on the day of the game we had almost as many people waiting for a potential last-minute spot as we had players! 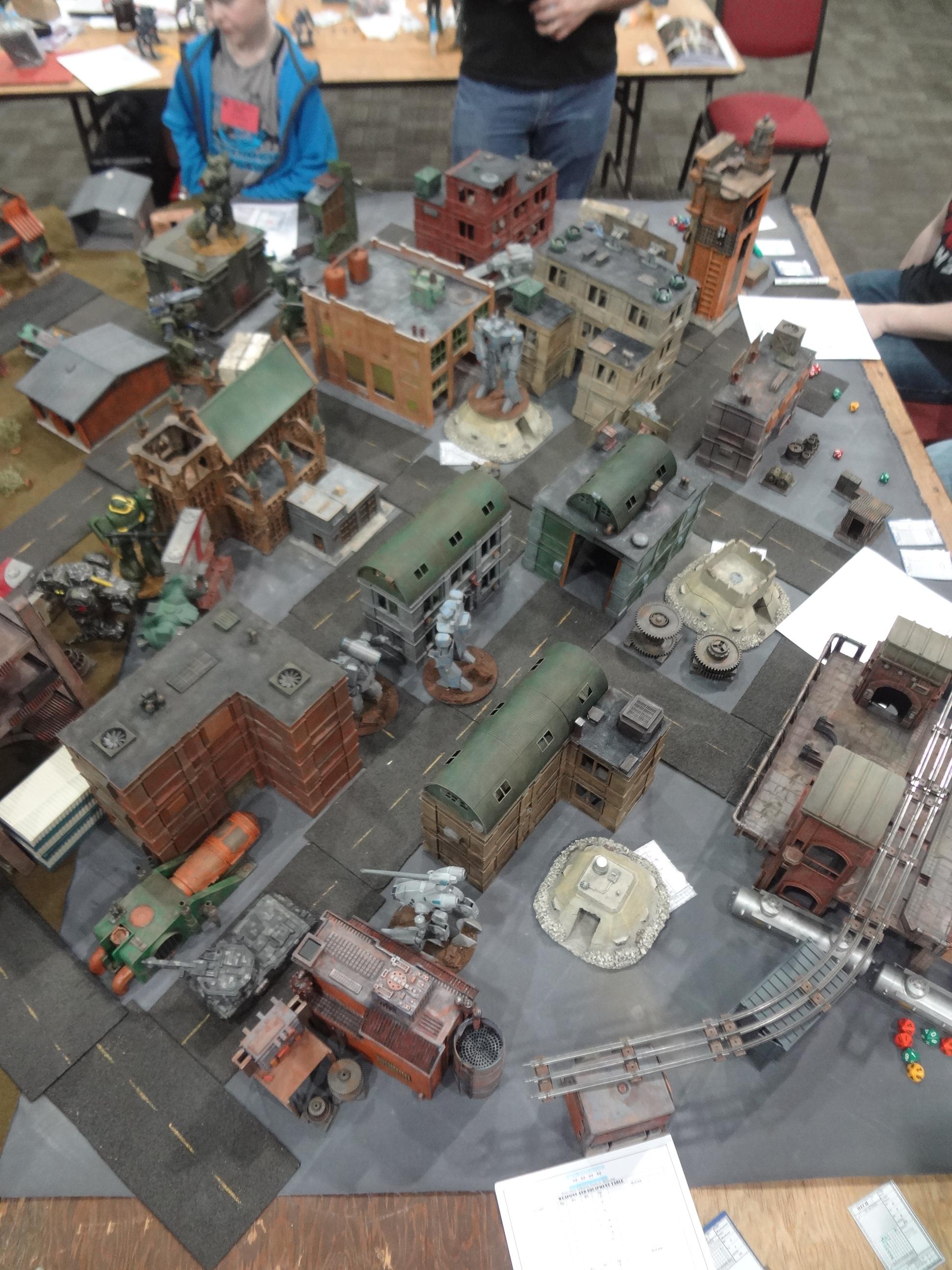 The game layout was similar to the previous convention, but we added a bunch of scatter terrain. It had no effect on gameplay but sure looked nice. The only additions were a bit of train track for the elevated train station, a batch of sci-fi shipping containers made from vintage Micro Machine playsets, and a transport truck. 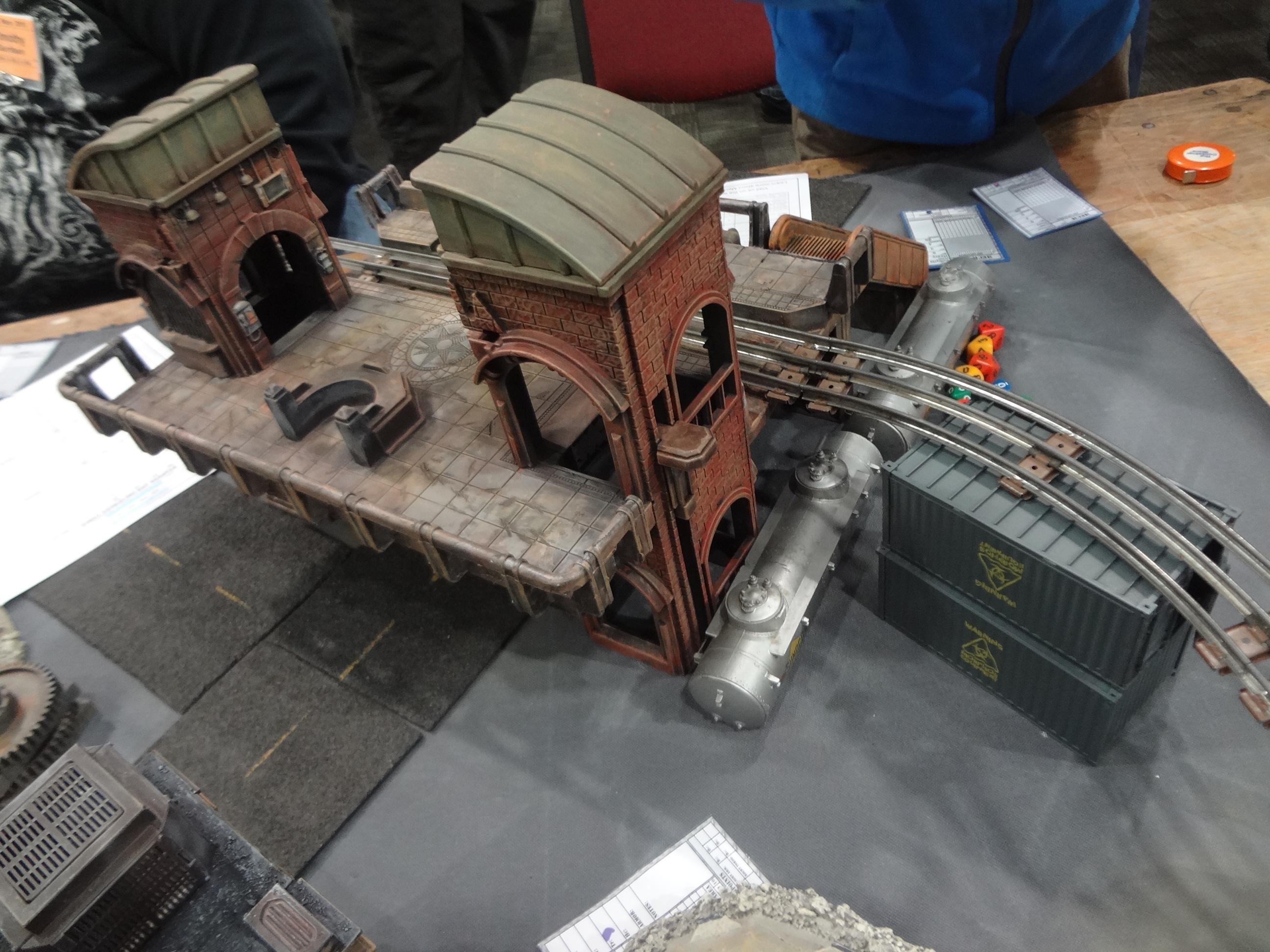 Since we had twice as many players as at Adepticon, I gave every player only two units rather than three. This still resulted in 50 percent more units on the table, but didn't seem to affect the flow of the game. 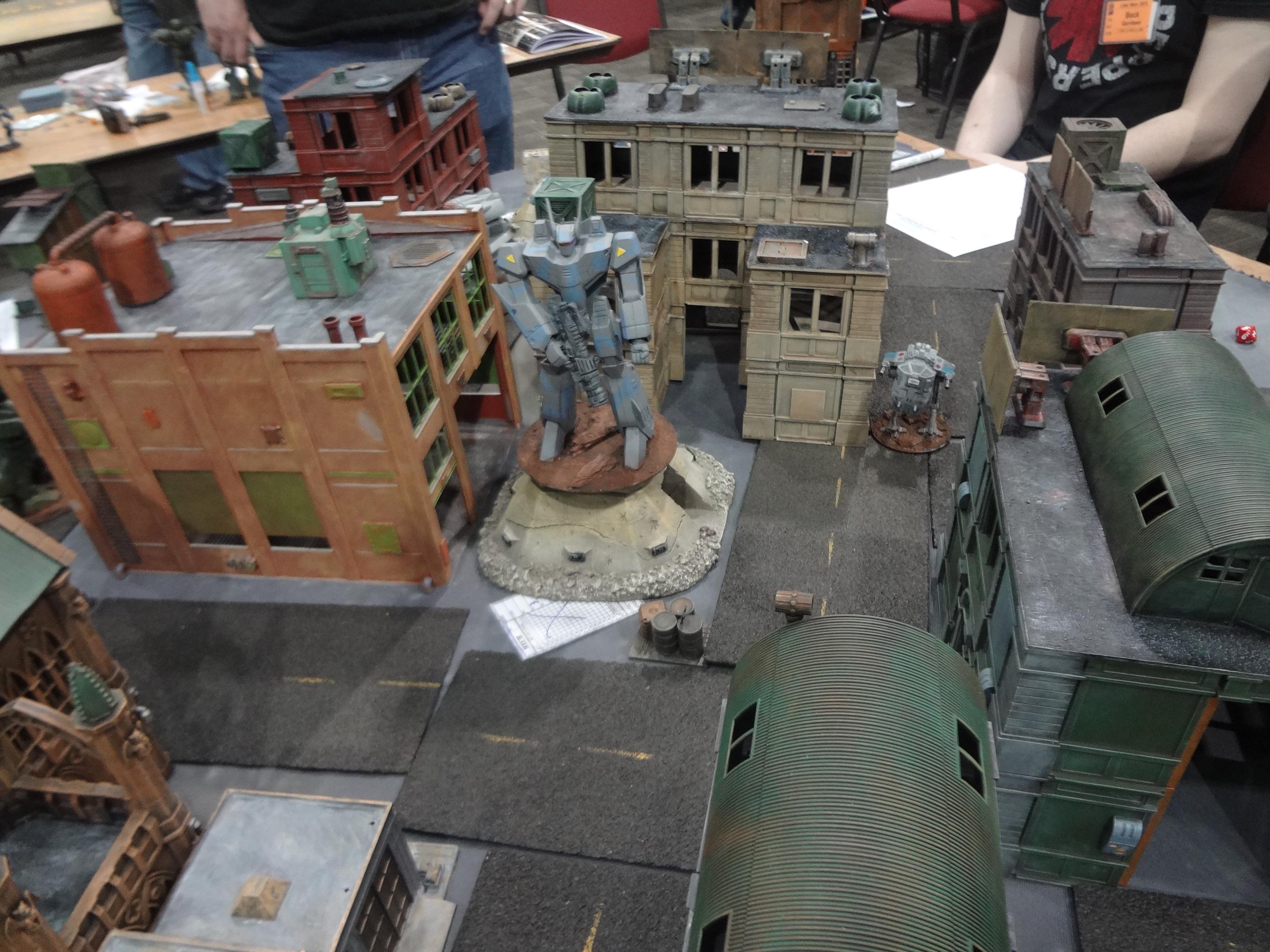 The battle ended up being fairly straightforward. However, the younger players were quickly drawn to the idea that mechs could climb on top of buildings, and some dramatic scenes ensued. The actual result of the game was a bit of a surprise to me. I assumed that with more mechs on the table to block the attackers' slow advance, the game would certainly go to the defenders. 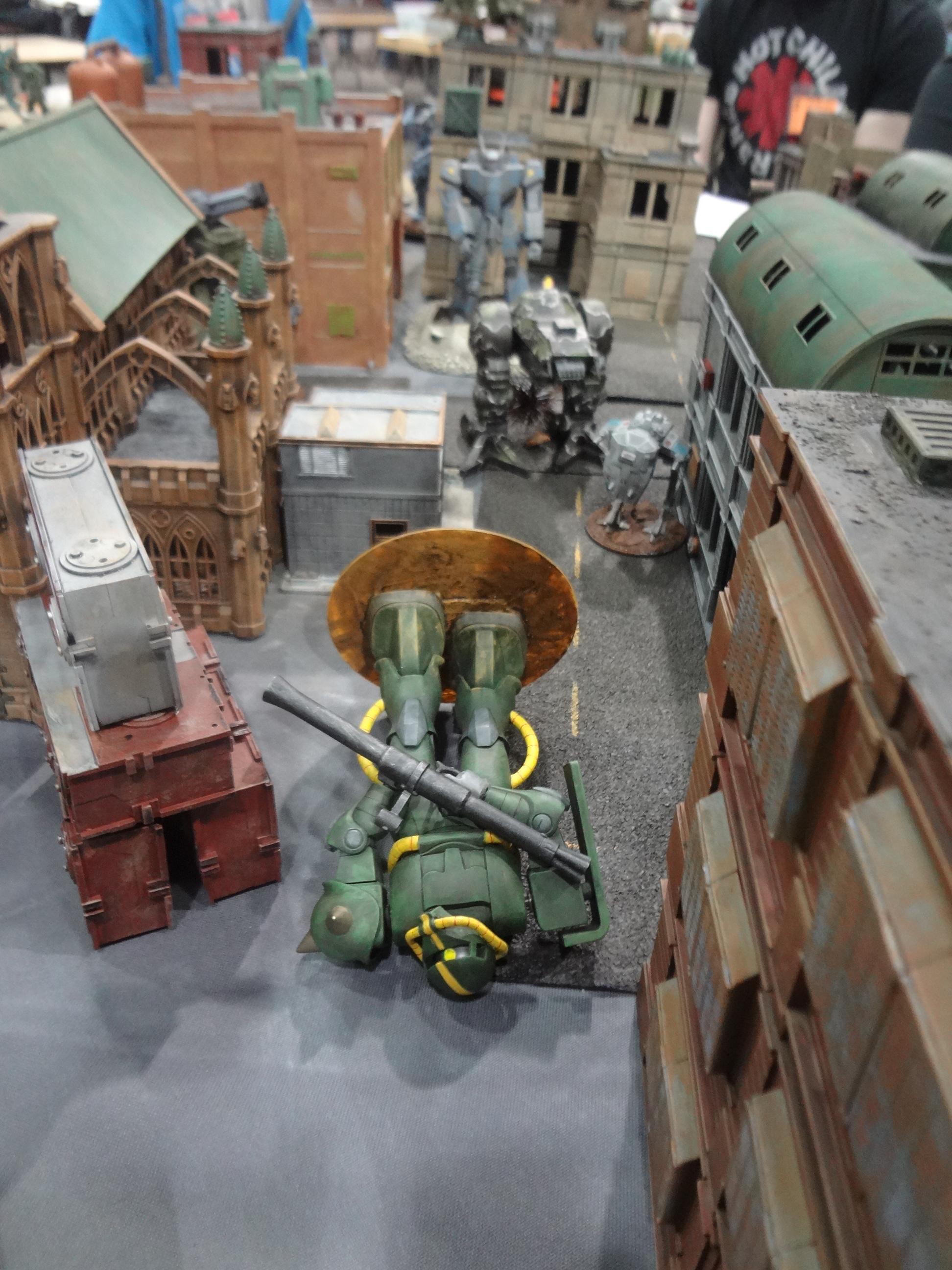 However, with only two units per player and each side activating one unit per player, the gameplay went quickly. 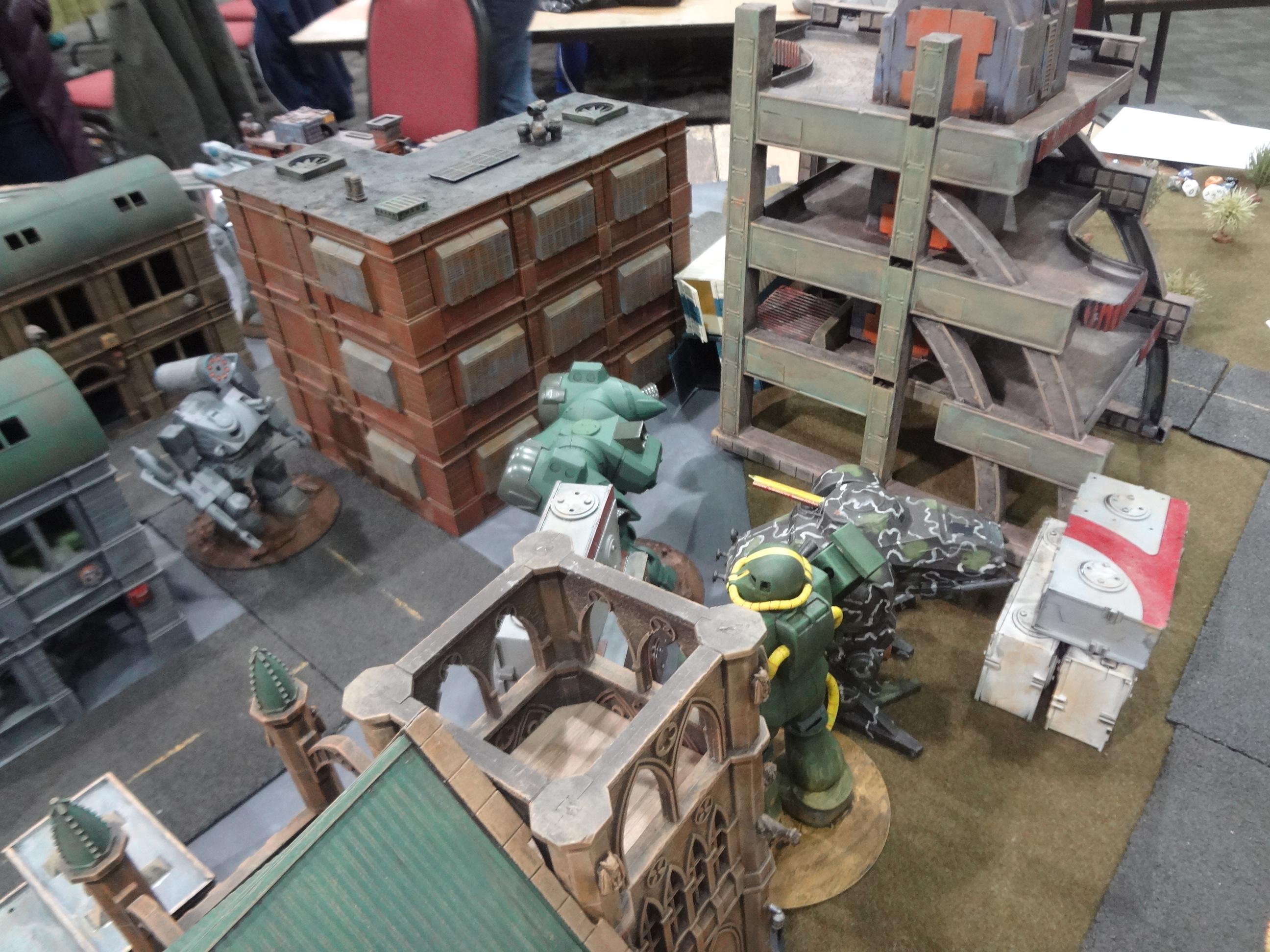 It took the attackers less than two hours (the game had three hours allotted) to destroy the three pillboxes and win the day. 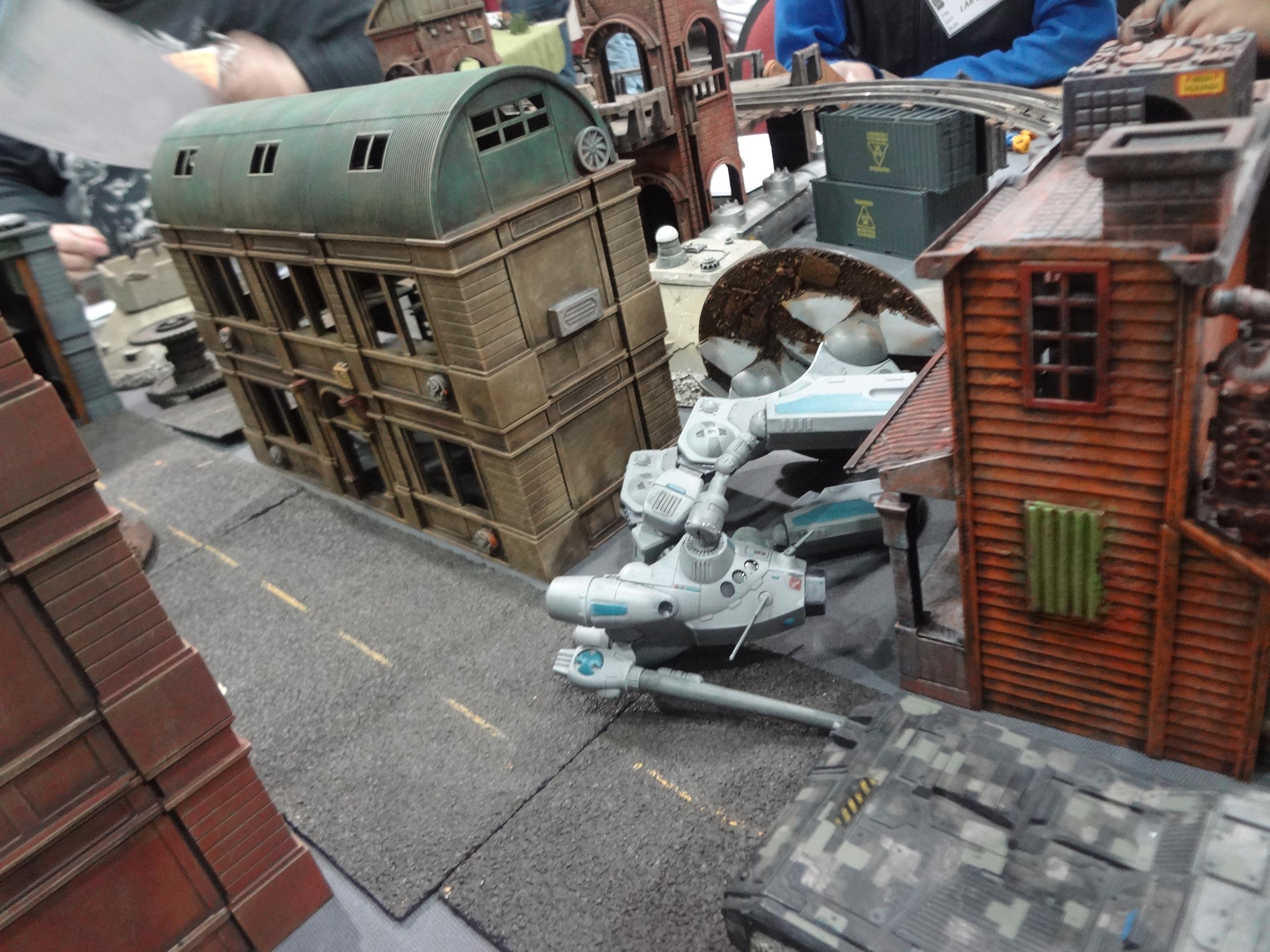 With so much time left, I gave the players the choice of leaving, but those who stay could either continue the game or have a death match. They chose deathmatch! We reduced the playing area a bit, gave each player one mech and divided them into three teams. It took just an hour for one team to make enough kills that the others conceded. 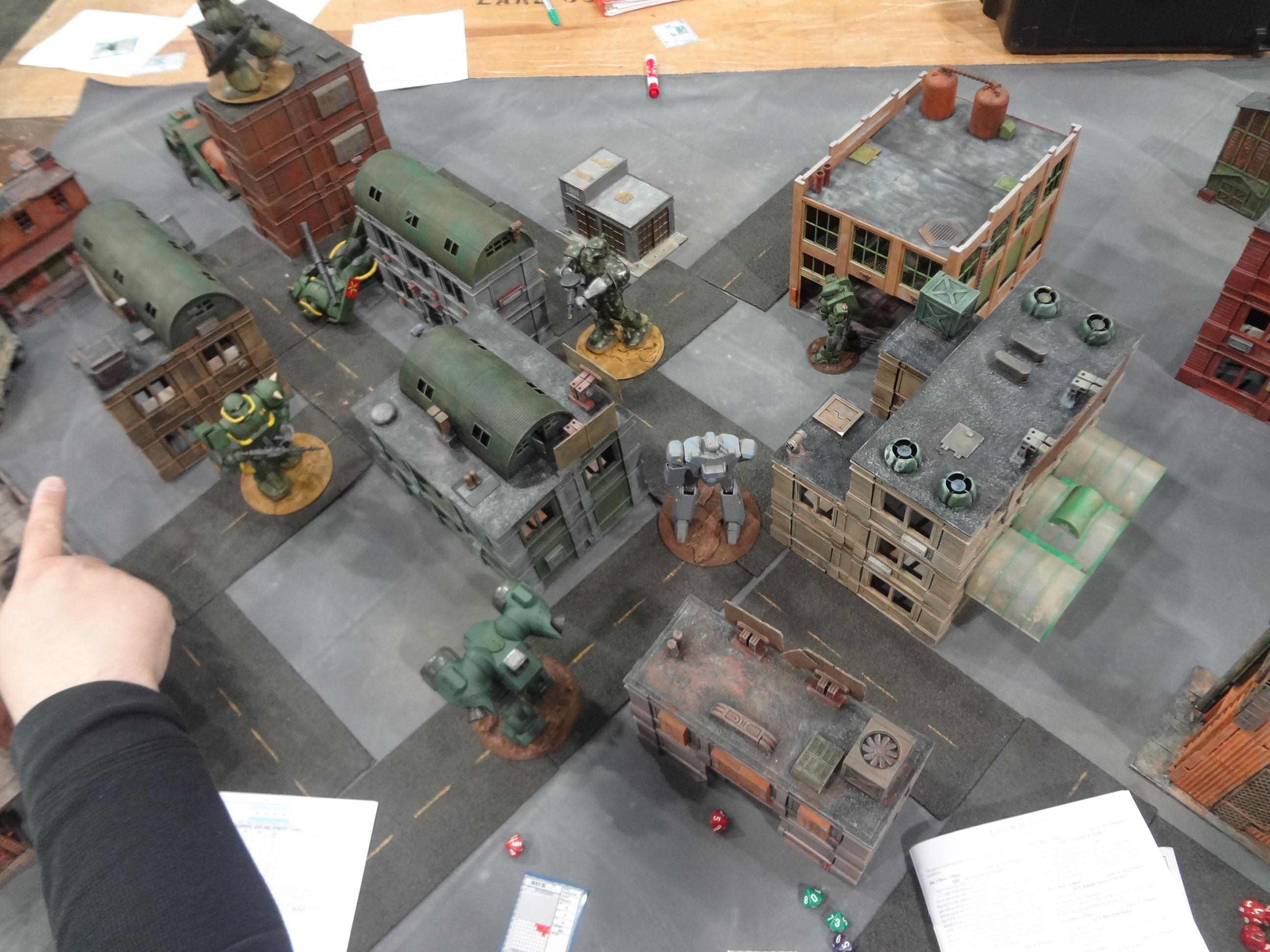 Being able to play the same scenario with different numbers of players and units was very instructive. After two years, three conventions and at least five play-throughs, the scenario itself is very tight and players seem to enjoy it, but it's probably time to do something different. Two of the gamers from Little Wars 2014 came back this year, and we should probably give them a new experience next year. Also, it's clear that the players can handle more units than I am giving them. Maybe it's time to put infantry and vehicles back into the game, as we did in the first year we put on Mech Attack at Little Wars in 2013.

Little Wars as a whole was a positive, if slightly mixed experience. As in the past, I was only able to be there for Saturday during the daytime, so I can't speak to the entire convention. Having a double helping of excited and interested gamers was really encouraging though. It's almost enough to make me run the game twice next year.

On the other hand, the Saturday morning flea market was two hours earlier than last year and half as interesting. Further, I just didn't find as much to love in the dealer section, which seemed even lighter than last year (which was down from the year before). I made a few nice finds (including a box of Oldhammer chaos warriors and two Rogue Trader commissars), but in total I dropped half as much cash as I have in the past. Buying and bargain hunting is one of my favorite parts of a convention, so that was a bit of a let-down. As for the general vibe of the convention, everyone seemed to be enjoying themselves and while the early morning had at first seemed a bit low in numbers, by midday it was plenty full of happy gamers.