A week ago I was at my local resale shop when I came across a Rokenbok Monorail Start Set. 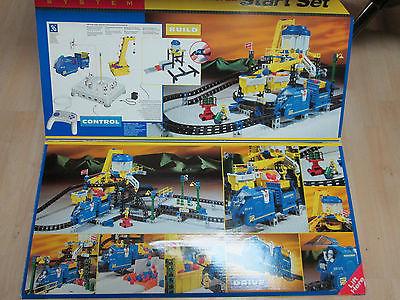 It lacked the train and many of the other small elements, but the other large elements -- a ball elevator and storage tank -- that intrigued me most.

For those who don't know, Rokenbok is a building system based around mostly cubed construction elements and radio controlled items such as trucks, monorails and other motorized features. Despite having other projects in the pipeline, as soon as I got home I broke out my tools and glue and started building.

First off the assembly line was this Storage Tank. 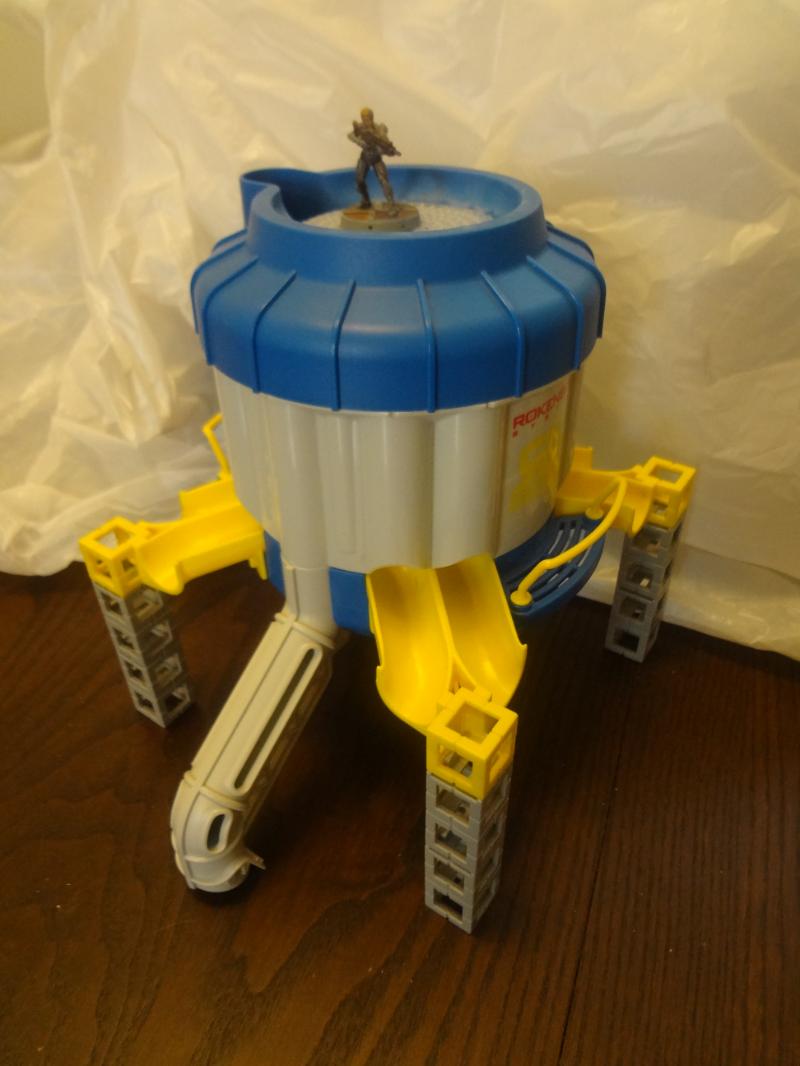 It is mostly stock pieces, except for the addition of a grating on top cut from circular cross stitch mesh (which is an excellent way to add industrial-looking floors to any round item). I also added some corrugated floors over the downspouts (not pictured).

The second item is the Ball Elevator, originally intended to lift plastic balls up into the storage tank. After cutting away the power cords, I removed the rubber conveyor belt and glued in some lift sections. A bit of cutting enlarged the top spout enough to fit miniatures up there. 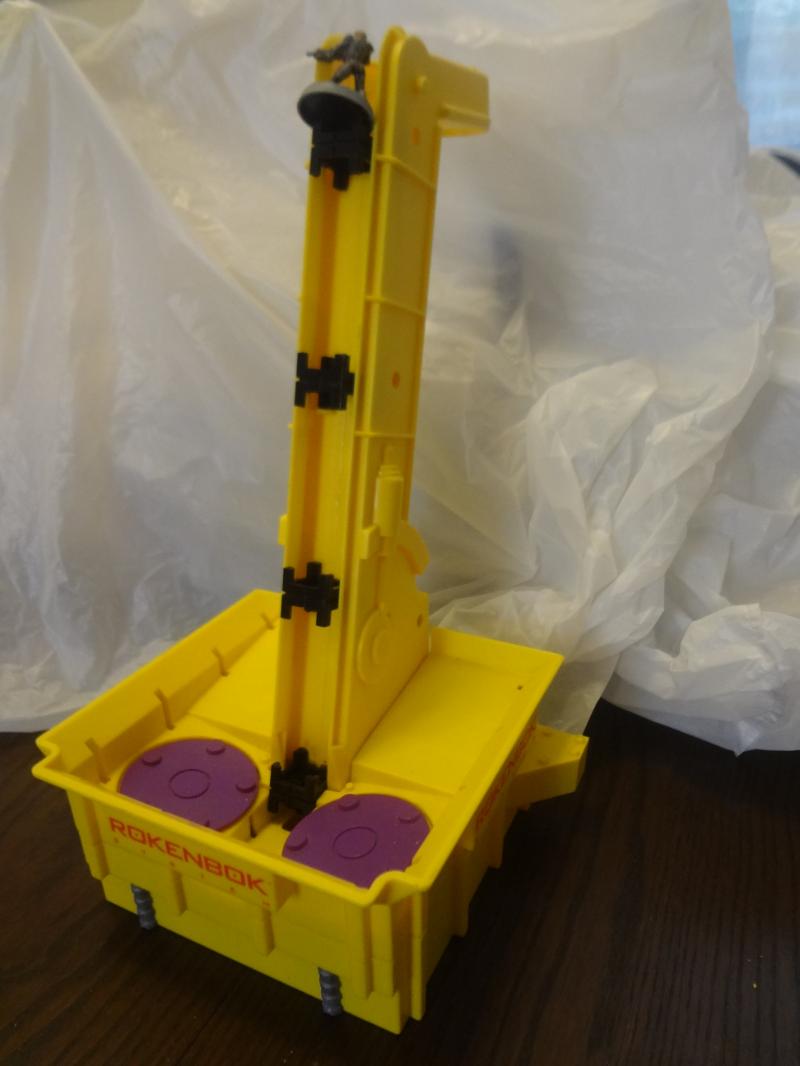 A couple of small bits from the Pegasus Chemical Plant kit were added. The cavity in the back for the power cord is perfectly sized for 28mm figures. 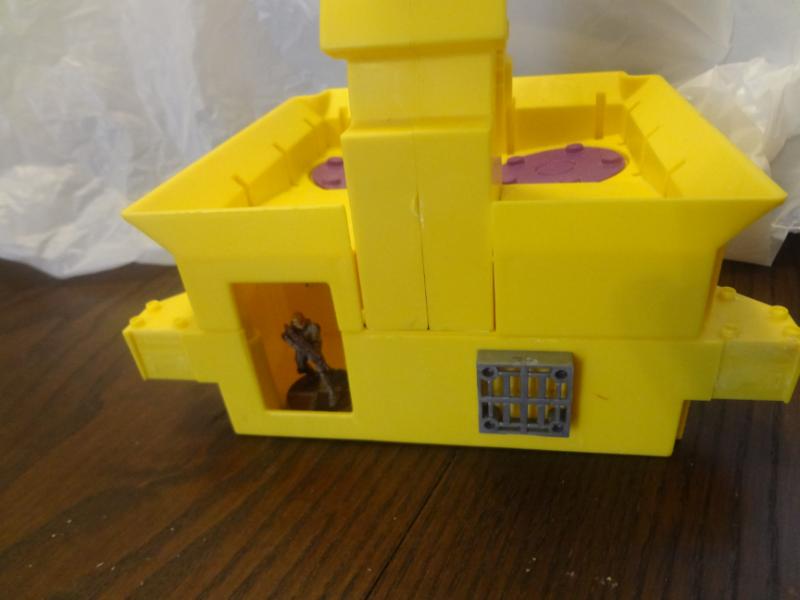 Both terrain pieces were undercoated with ruddy brown Kryon spray primer. Then I added a wet overbrushed color layer, followed by a brown wash and a light tan drybrush to dust everything up.

The inner areas of the elevator also got some heavy ballast using the concrete topper mix that I've been trying out. It's concrete mixed with a nice variety of gravel and sand. The concrete portion isn't as gritty as plain sand (which takes a drybrush extremely well), but it looks like soil when painted, and the mix of gravel sizes is great.

Here's what they look like with paint.
Adding pieces of corrugated cardboard turns the downspouts into useable area and makes the entire second story of the tank much more useable. If you don't have any corrugated cardboard on hand, just grab a few Starbucks drink sleeves. 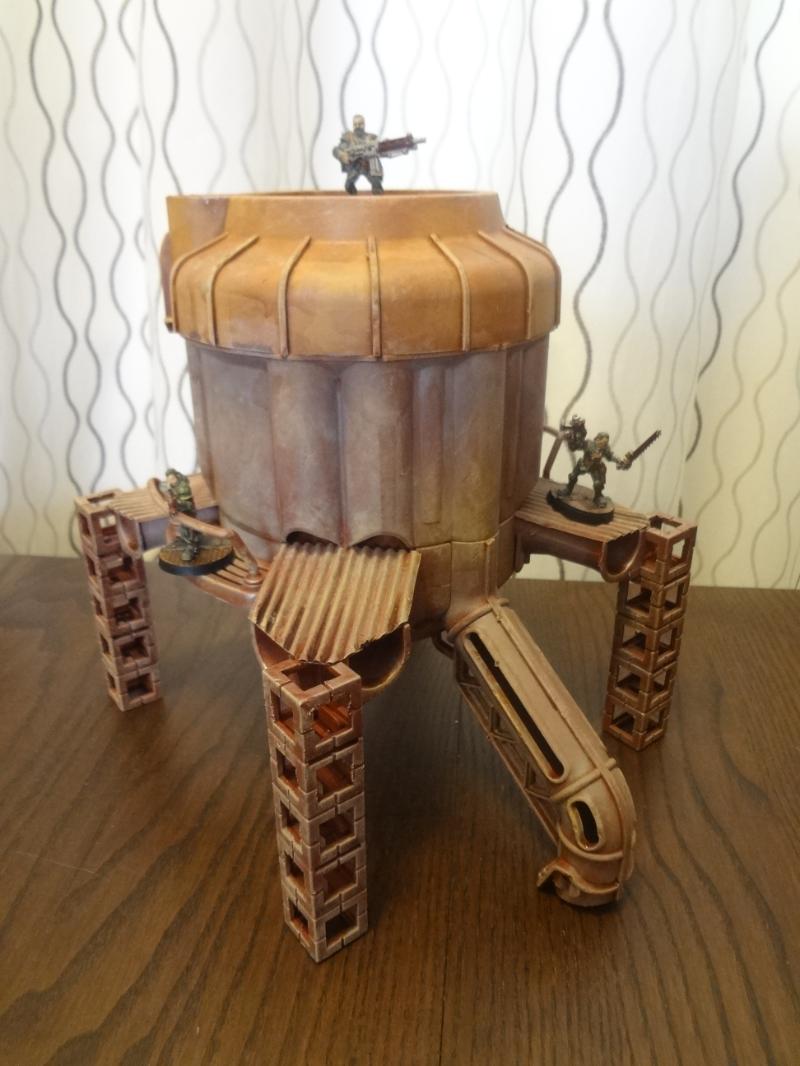 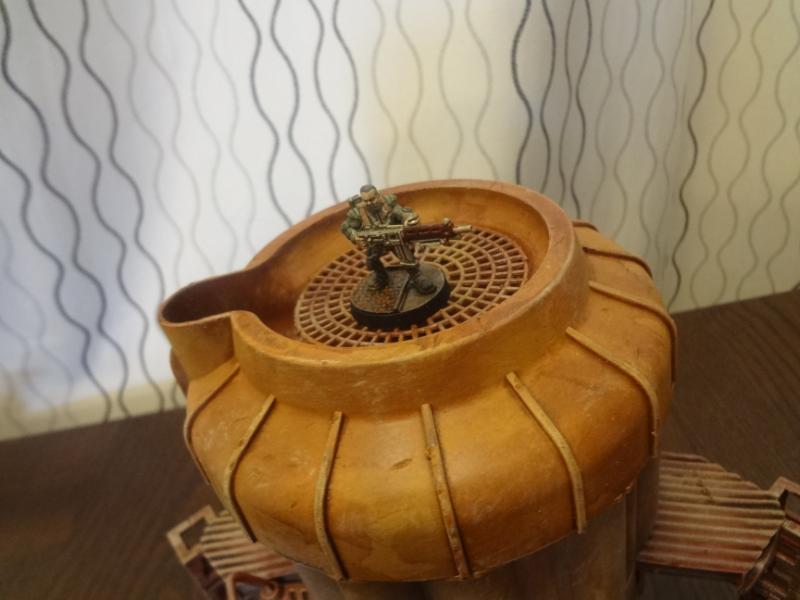 Looks like I forgot to include a ladder up to the top though... 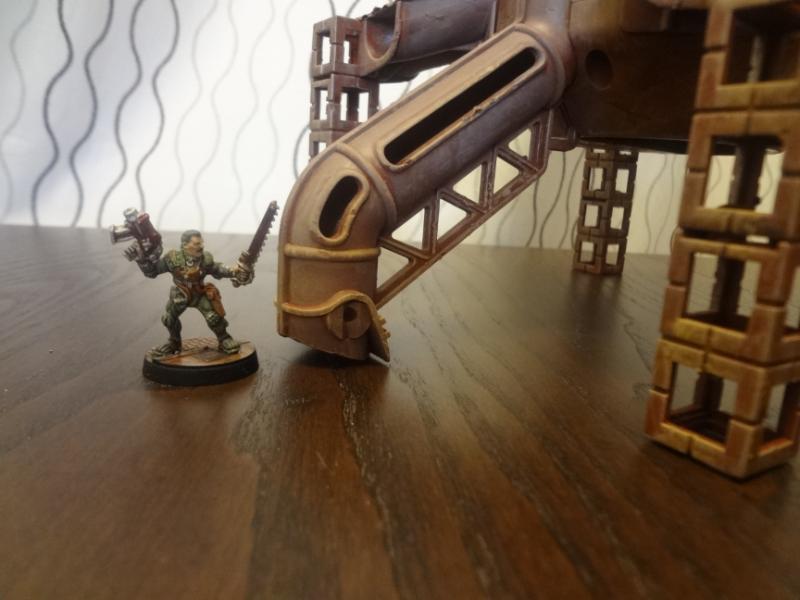 The elevator makes both a very fortified position and a means to access higher sections of a multilayer terrain layout. This bad boy is tall! 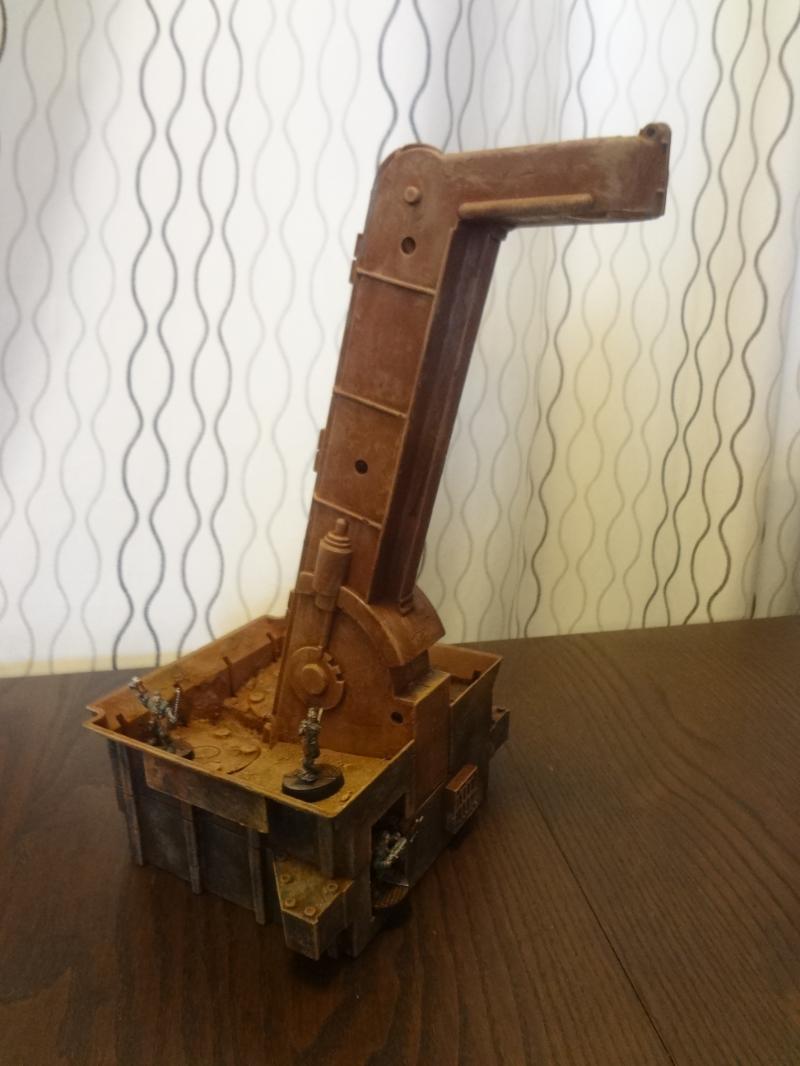 Though it looks plain blue in the picture, the paint is actually a really nice blue-green color. 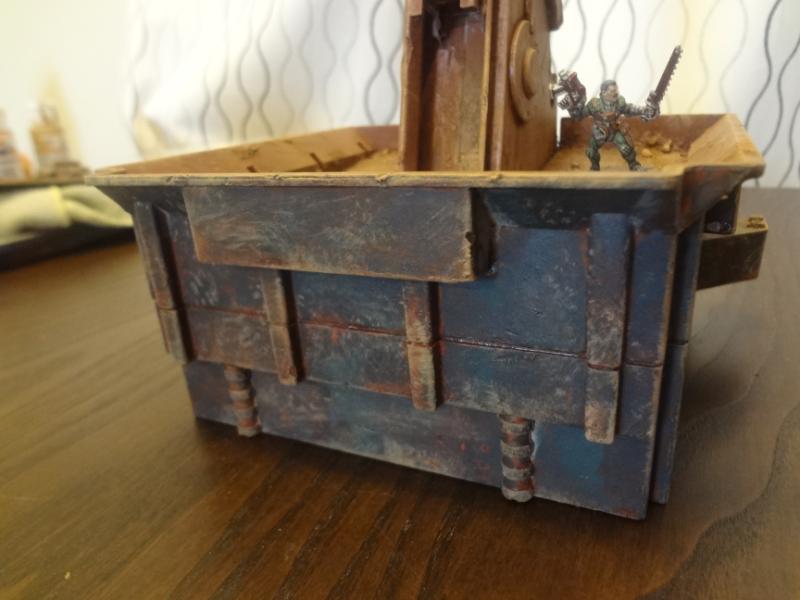 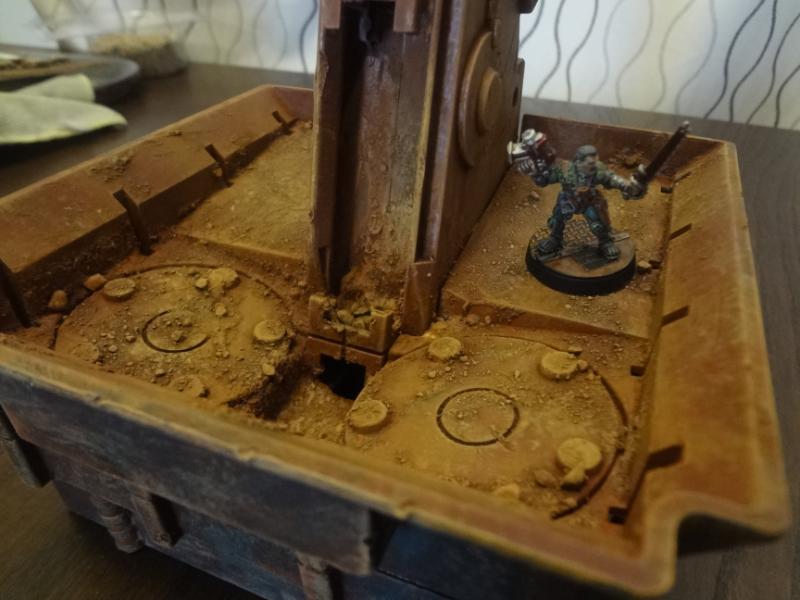 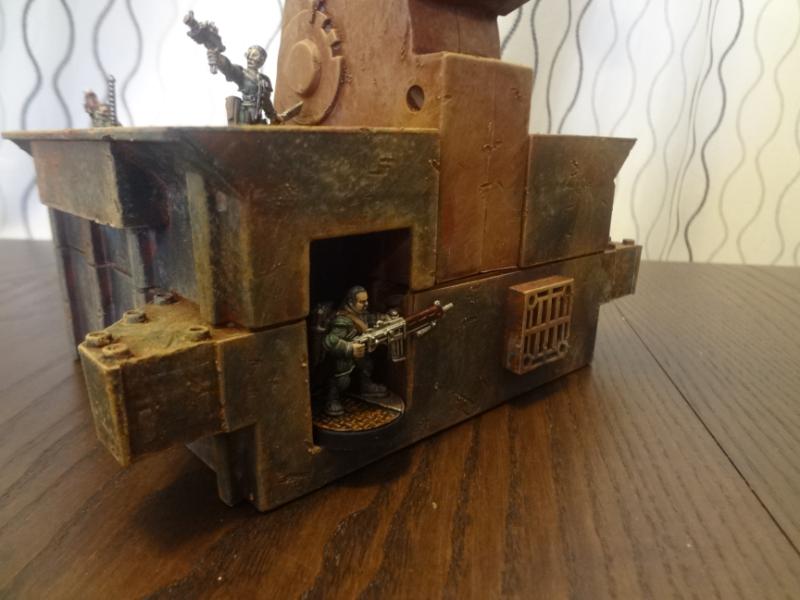 The bucket sections are close enough to avoid disrupting movement in most gaming rulesets. 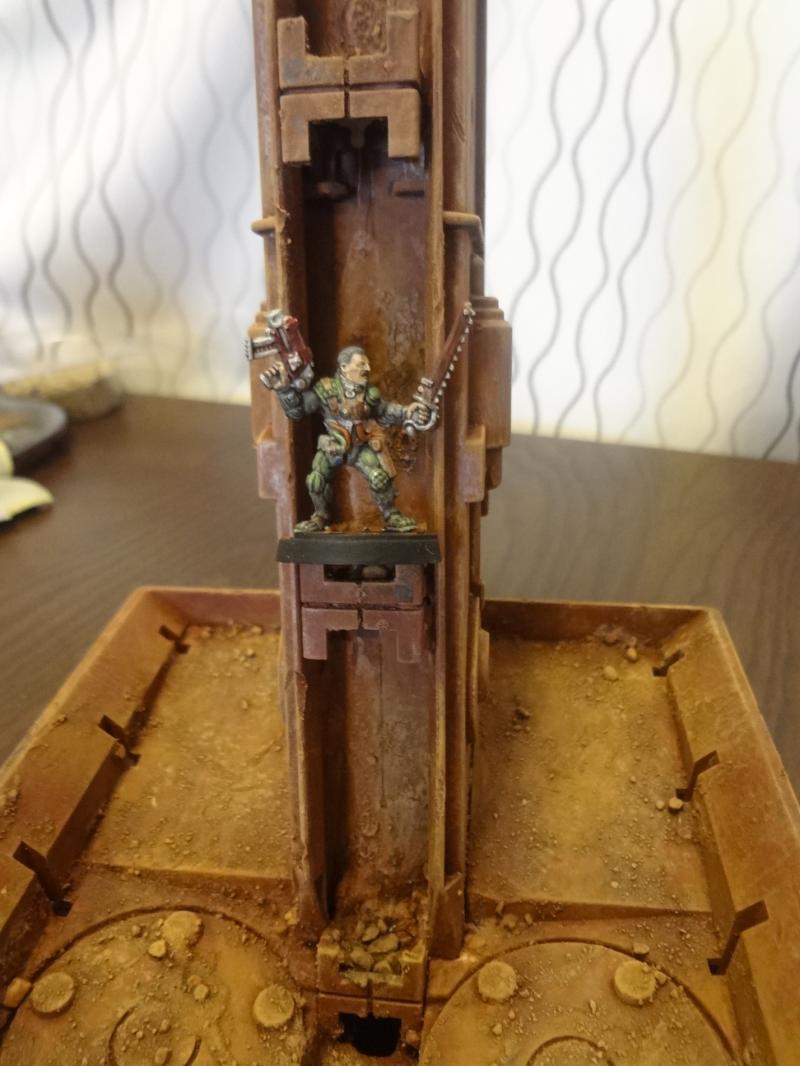 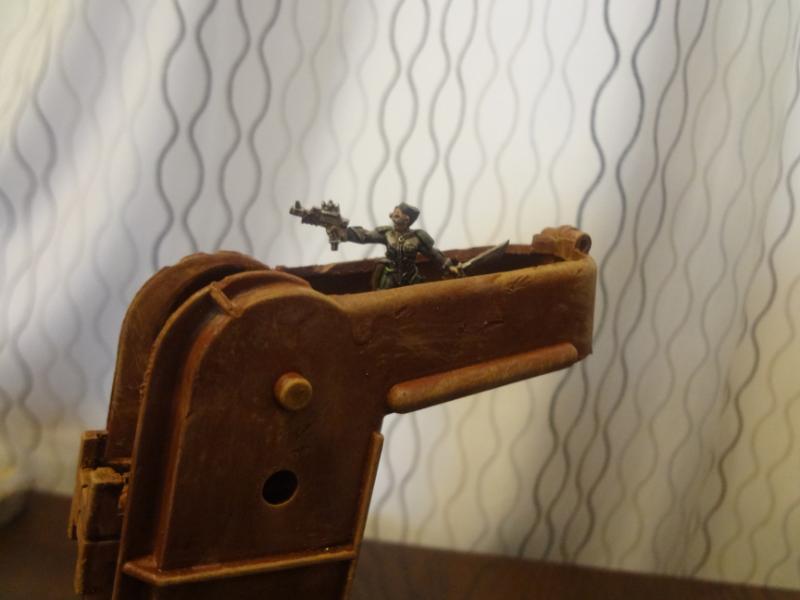 These were on the table for last weeks game, and they looked great. I'm especially keen to see them as part of a Necromunda layout. The square supports that make up most of the Rokenobok system run the risk of looking a bit similar if used to much, but they have a nice futuristic look, and I'll be using these parts in future constructions.

Lastly Rokenbok toys are a bit too expensive to buy at retail just for terrain purposes (this set cost almost $200 in stores!), but I'll definitely be keeping an eye out for them at the resale shop.