The Dogs & The Dust Sci-Fi Playtest

Last Month, the club gathered for another playtest of "The Dogs and the Dust," a new sci-fi ruleset under development by fellow club member Mattias. Unfortunately, I forgot to take enough pictures, but this report should give you an idea of what went down.

Game 1
On this field, Mike C. and I fought a battle between his space marines and my ragtag mercenaries (figures provided by Mattias). Three objectives were scattered across the center of the table.

The mercs managed to get some of their forces to close in quickly on the objectives. 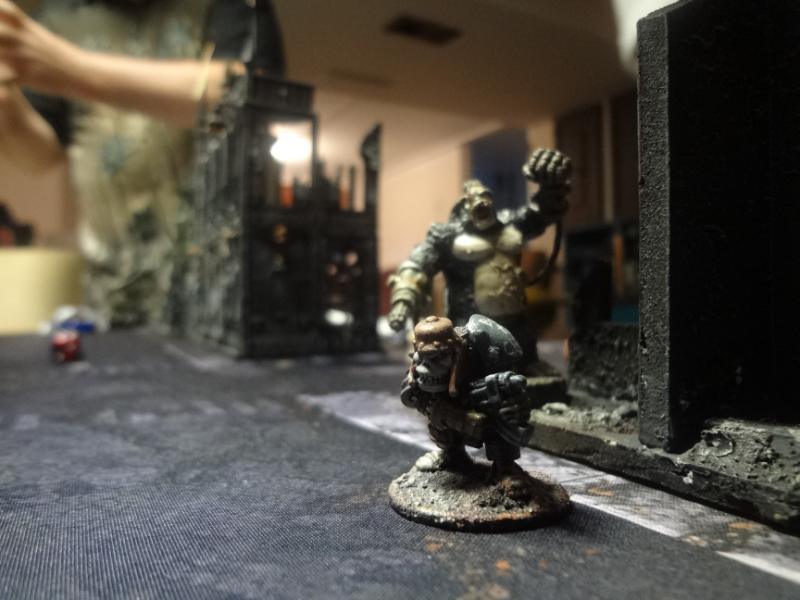 However, the space marines' slow and steady advance proved to be a wise decision. 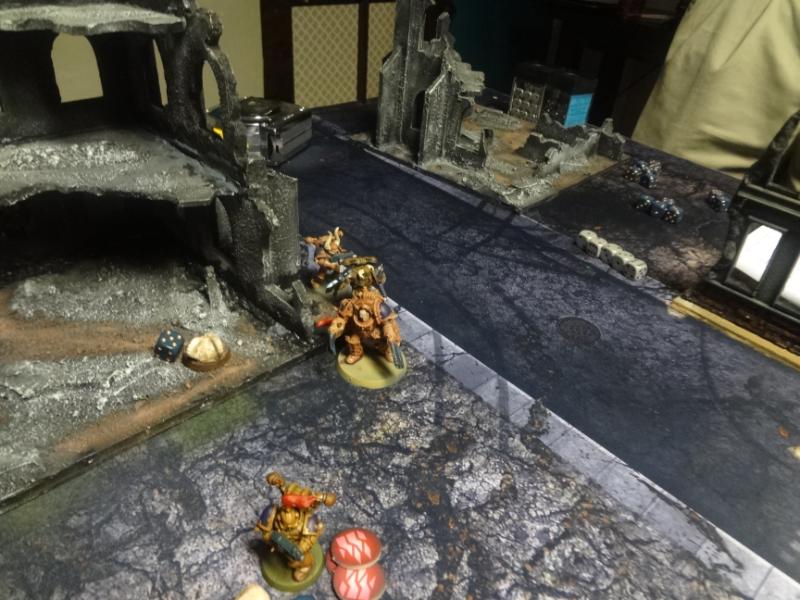 Despite concentrated fire, the mercs failed to take down a single marine. 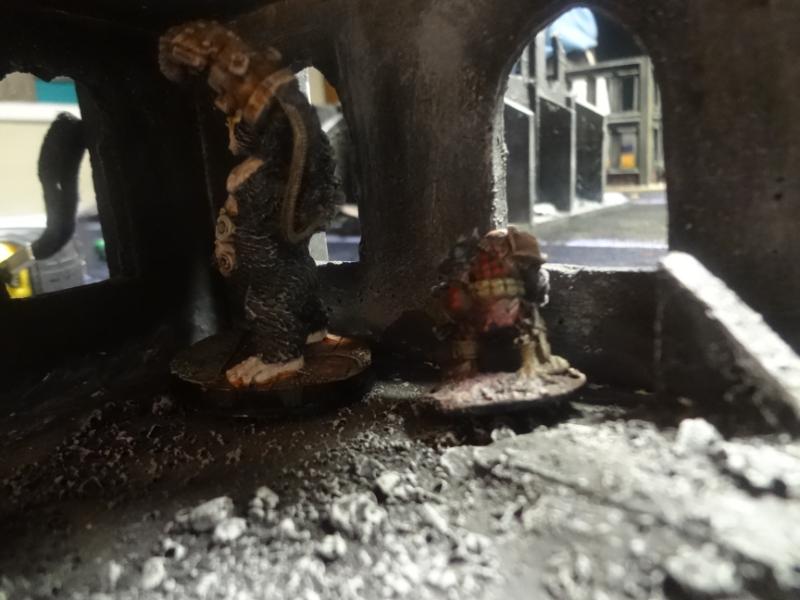 The mercs had some fearsome and powerful creatures on their side, but when it came to blows, the power-armored marines wiped the floors with the undisciplined upstarts. 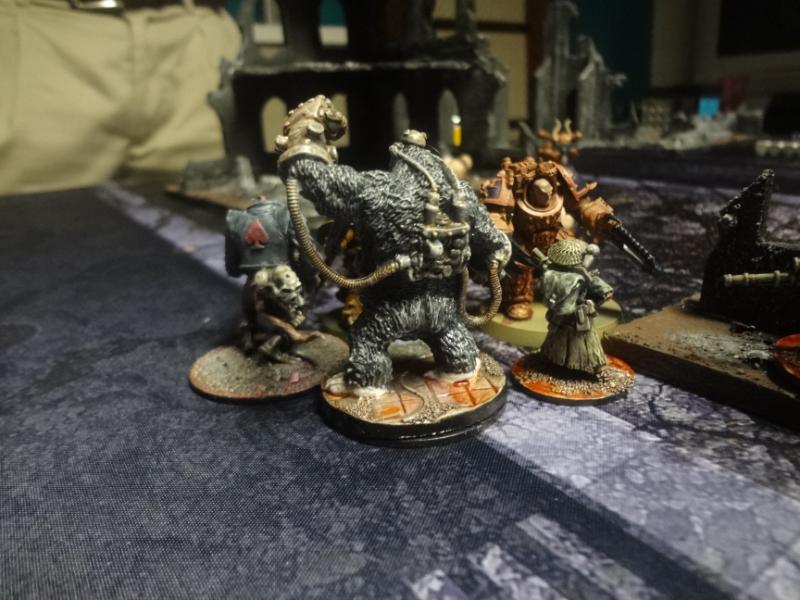 The mercs were quickly routed and fled without being in serious contention for even one objective.

Last time we played TD&TD, ranged combat was very deadly. This time Mattias had tweaked the rules in favor of armor and close combat. The result seemed to move a bit too far in that direction, but the core mechanics of activation and combat was still very solid.

Though the summer campaign might delay it, I think I can speak for most of us in saying that we're looking forward to seeing where Mattias takes the rules next.

Game 2
On the second table, Michael S.' Rebel 69th Liberators fought a battle with Kevin's Inquisitorial warband. Kevin may have been the new guy at the table, but he showed up with an understanding of the rules that put us all to shame!

Michael opted to write up their battle report in a narrative style. As with my game I unfortunately fell down on the picture taking, but it was a dramatic game. Read on!

Svetlana's 69th Liberators
Colonel ‘Iron Bra’ Svetlana, leader of her unit Svetlana's 69th Liberators, sensed someone or something approaching her command post. She sent members of her traitor legion out to investigate. Her bodyguard Zork Dead Dog went along with other members of her Company Command Squad and one of her veteran troop squads to investigate.

Zork and some warriors went to the right, and Svetlana led the others to the left, holding back just a little as reinforcements. The squad with Zork was also given the objective of going to the top of a tall building a block down to see that was coming and have a good spot to shoot from.

After going a short distance, they ran into what appeared to be an inquisitorial warband, and they engaged in an exchange of gun fire. 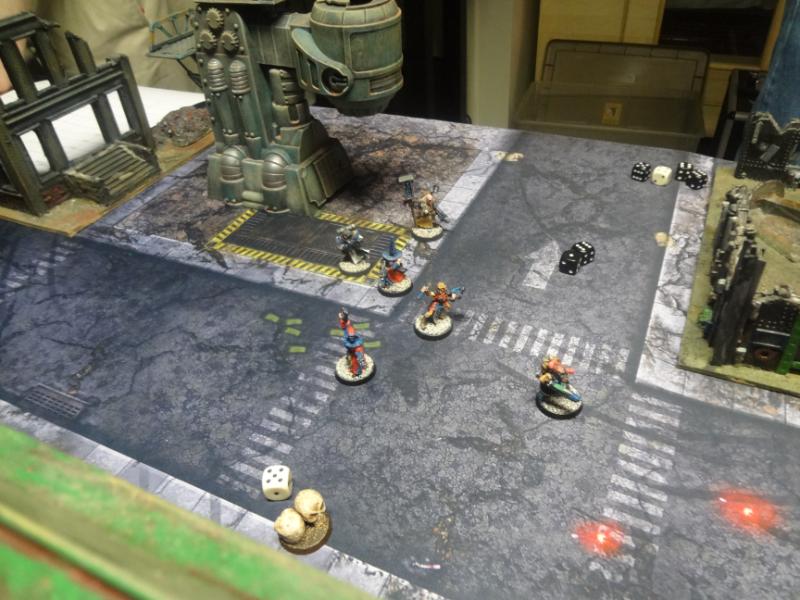 Zork went into the street in front of the objective and fired some shots. He was than charged by one of the enemy who fought him hand to hand. Even though Zork’s opponent was smaller than him, he seemed to easily match Zork’s strength. Maybe he was a mutant? A couple of more warriors charged in to help, but couldn’t stop the enemy. 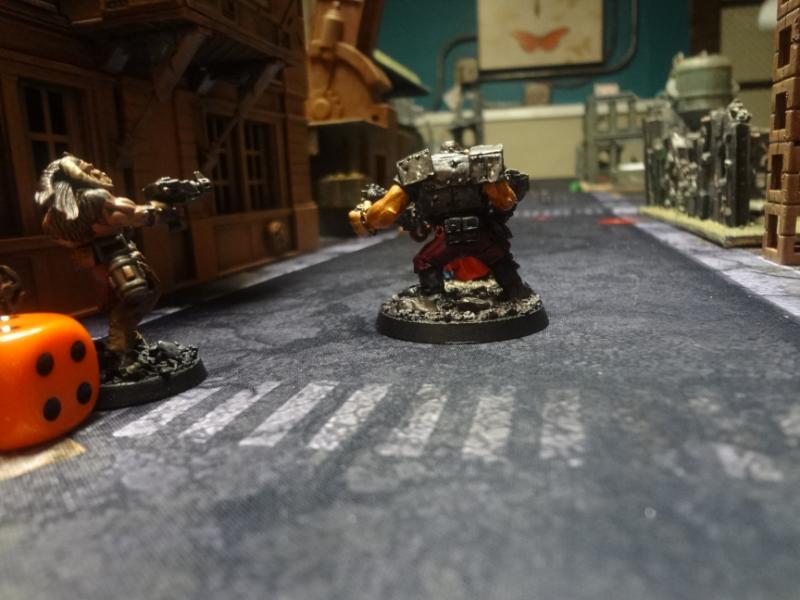 A couple of Svetlana’s warriors gained the objective of the roof. As one kept an eye on the alley behind the building, another went to the front of the building and stated to shoot into the advancing enemy. One opponent was hit about four times, but another enemy went to his aid and seemed to cure the wounds. Possibly psychic powers were at work. 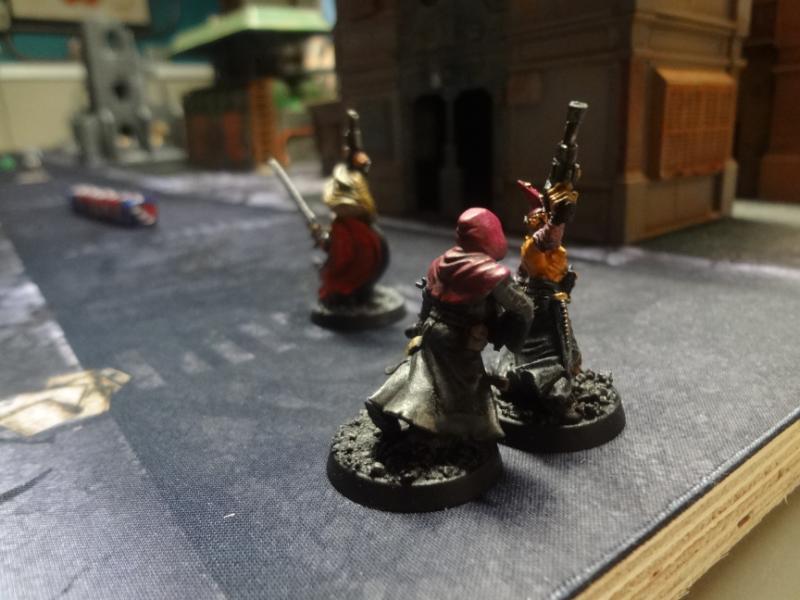 Some of Svetlana’s veteran troop squad went to the left and engaged in a firefight. During this engagement, three of her warriors fell, including the beastman. After a while both forces disengaged, leaving Svetlana to review the condition of her warriors.

Hope you enjoyed these two battle reports. We're enjoying The Dogs & The Dust and are looking forward to our next opportunity to play it.

One response to “The Dogs & The Dust Sci-Fi Playtest”