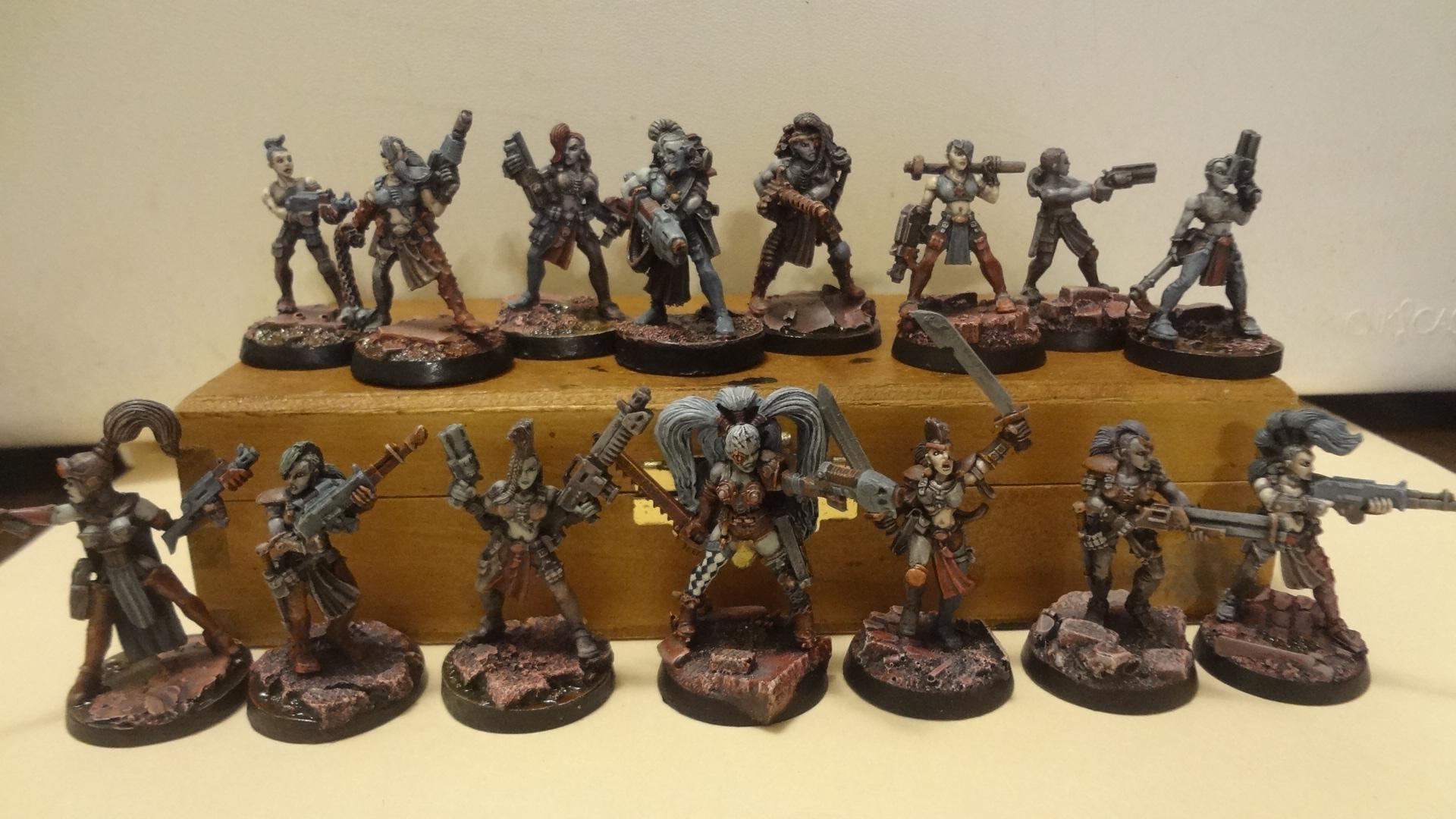 Before his departure to Hawaii, Mattias and I arranged a trade of terrain and miniatures. Earlier I showed off the buildings and cliffs that I built for him. Today I've got 15 Necromunda figures that he painted for me. All but one of these are unmodified Games Workshop Escher figures, based on Inkwell Industries resin bases.

The smaller size pics don't do these justice so I've uploaded large versions of each. If you really want to see them close up, go ahead and "open in new tab" any of these images to see the figs in their full glory.

Juves
The lowly cannon fodder of the gang. I had asked for a variety of skin tones. In Mattias' unique grayscale-based painting style, this results in a range from an elfin pale to a shadowed grey. 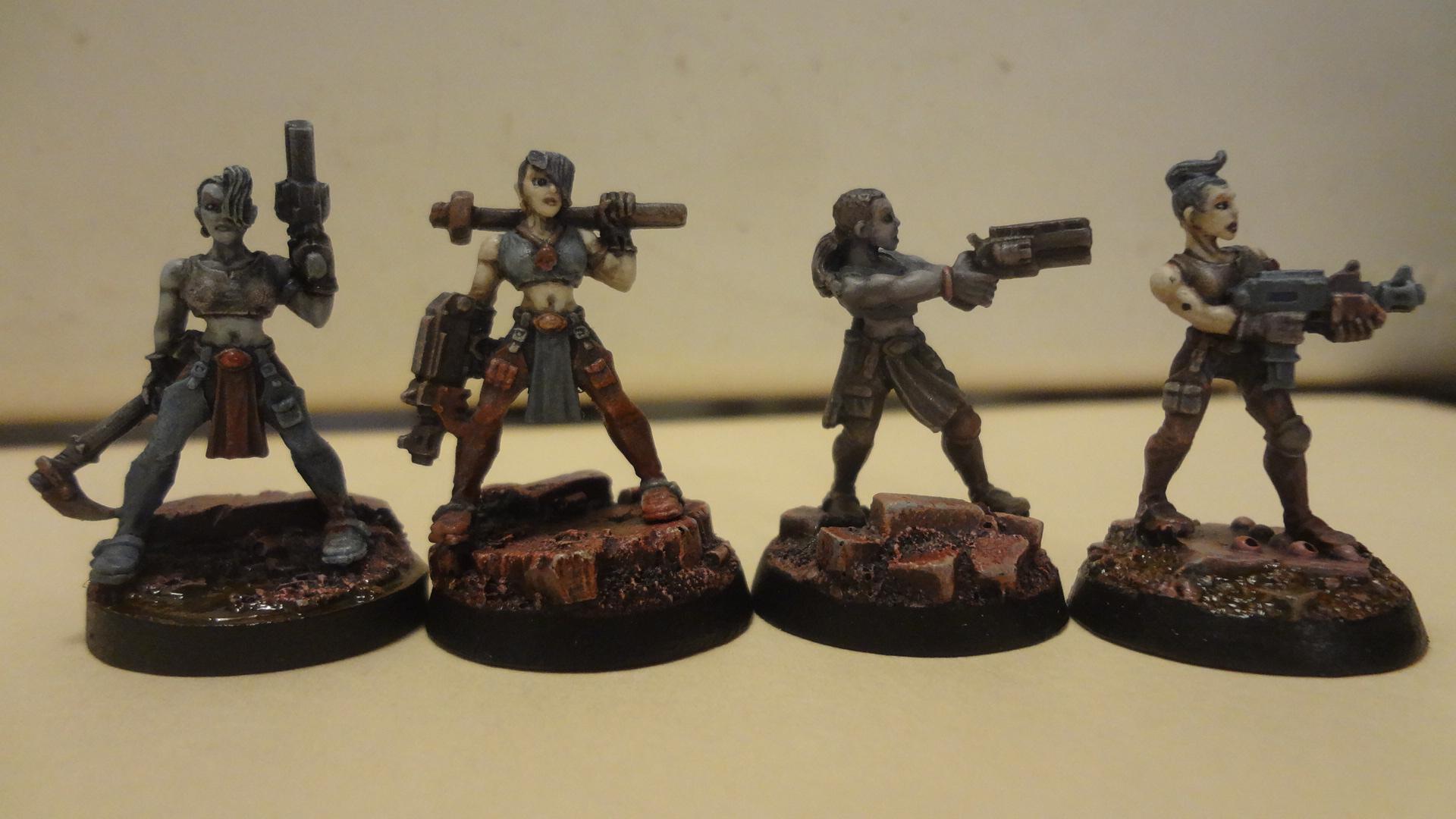 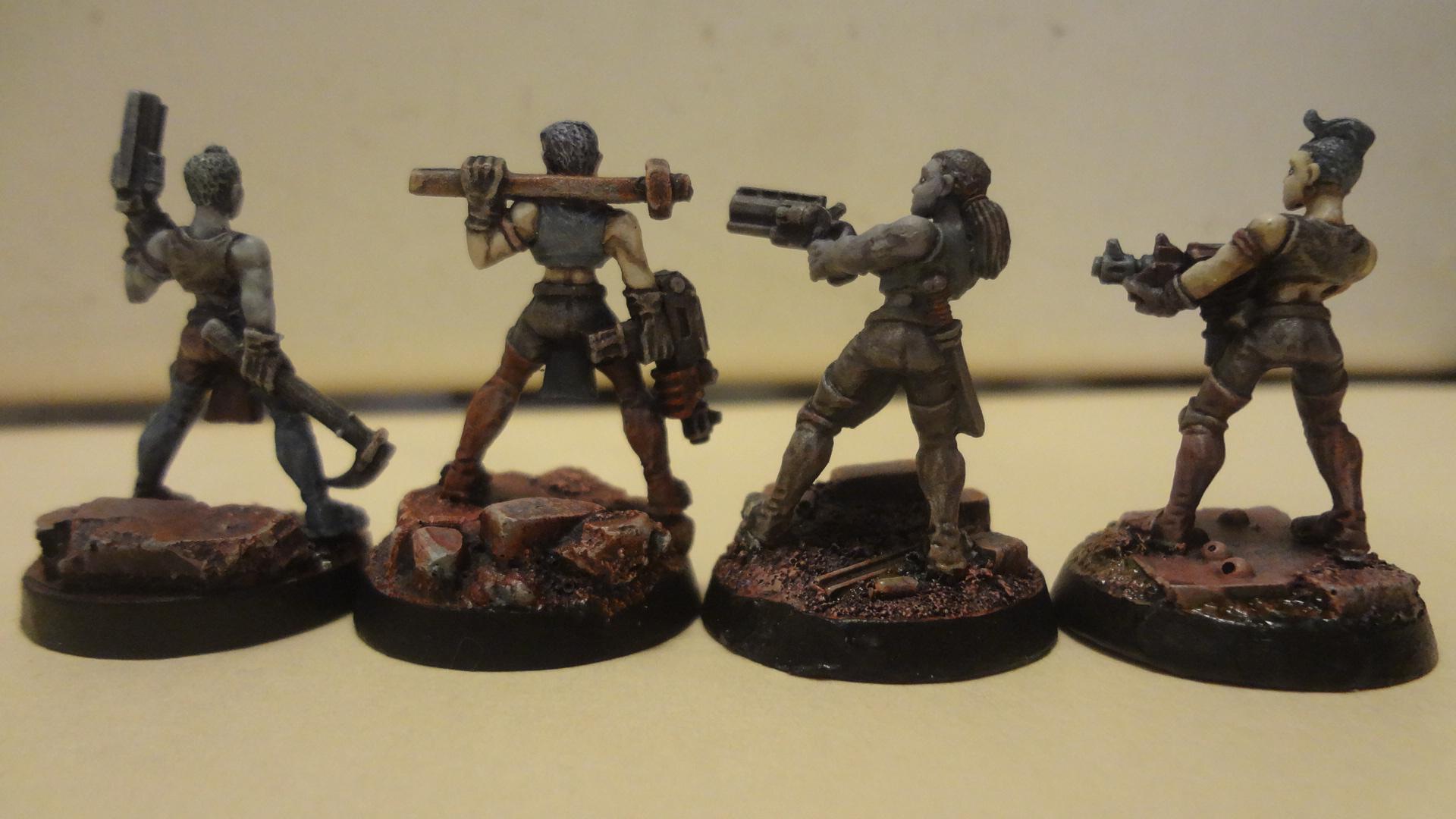 At first I was a bit confused by the somewhat monochrome bases, but now I think it's really a nice unifying effect. 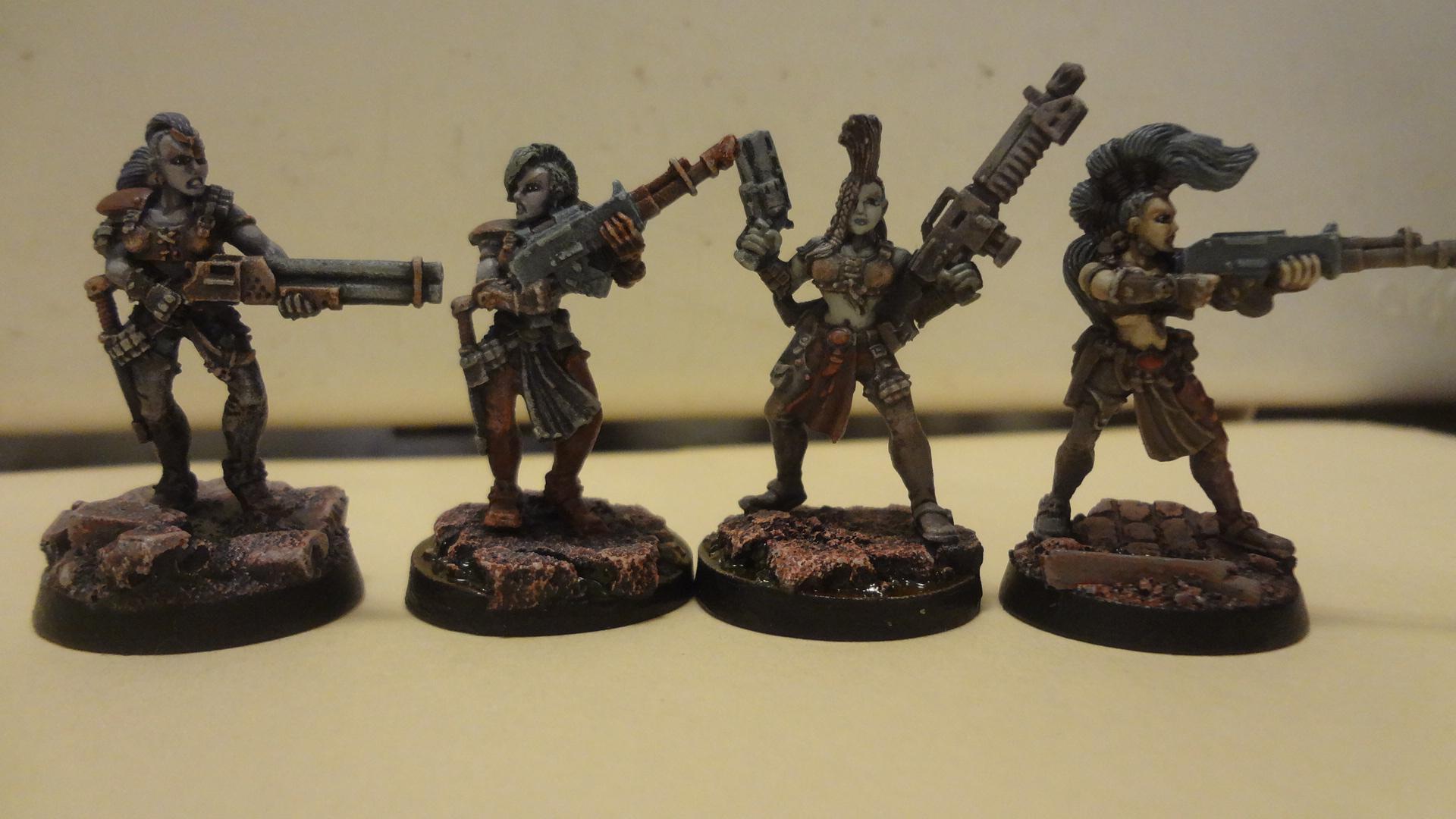 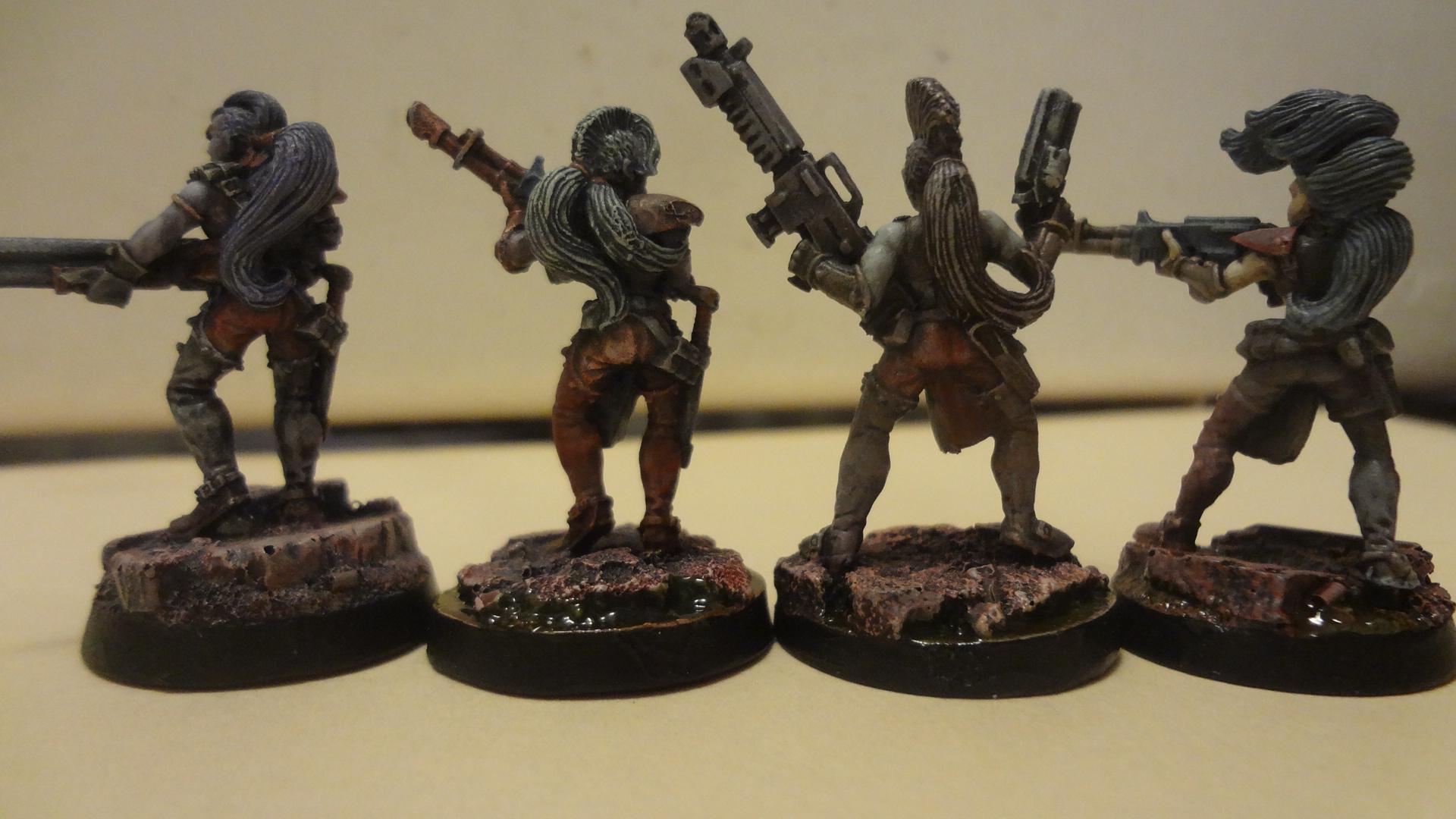 More Gangers and Heavies
Note the great sludgy wet effects. Most of the figures have a bit of it on their bases, but it's particularly notable here. Also, I'm really glad to have the plasma gun figure. The weapon is a nice in-between size that could easily be work as a plasma or heavy plasma gun. 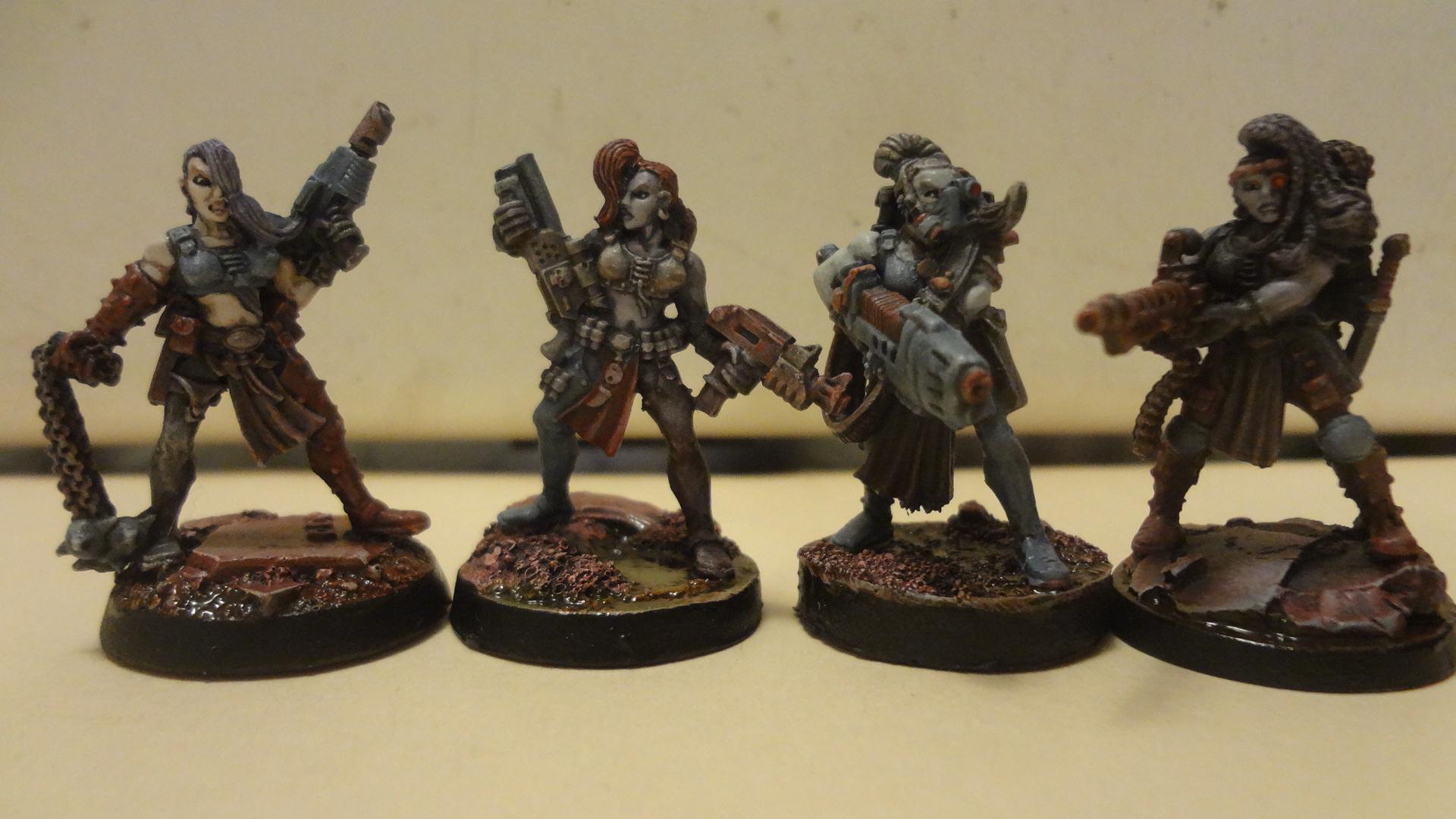 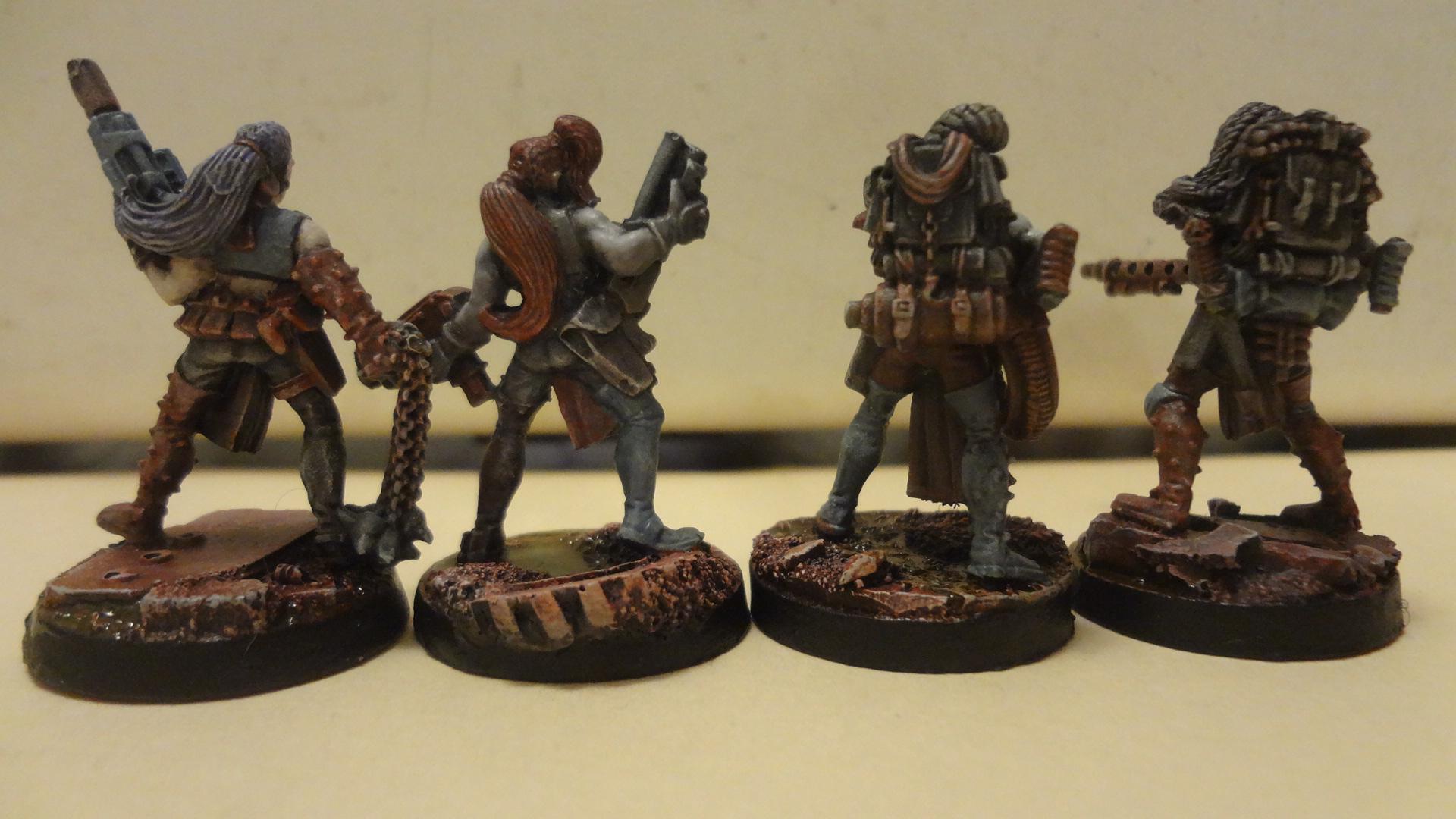 Unfortunately, the arms and hands were just terrible, so I chopped them off just below the elbows and attached the arms from a Heroclix Elektra figure, with a Necromunda autogun attached. She also has a Rogue Trader-era bolt pistol holster on her right leg. I think she fits in pretty well, and for those interested, she is still available here. 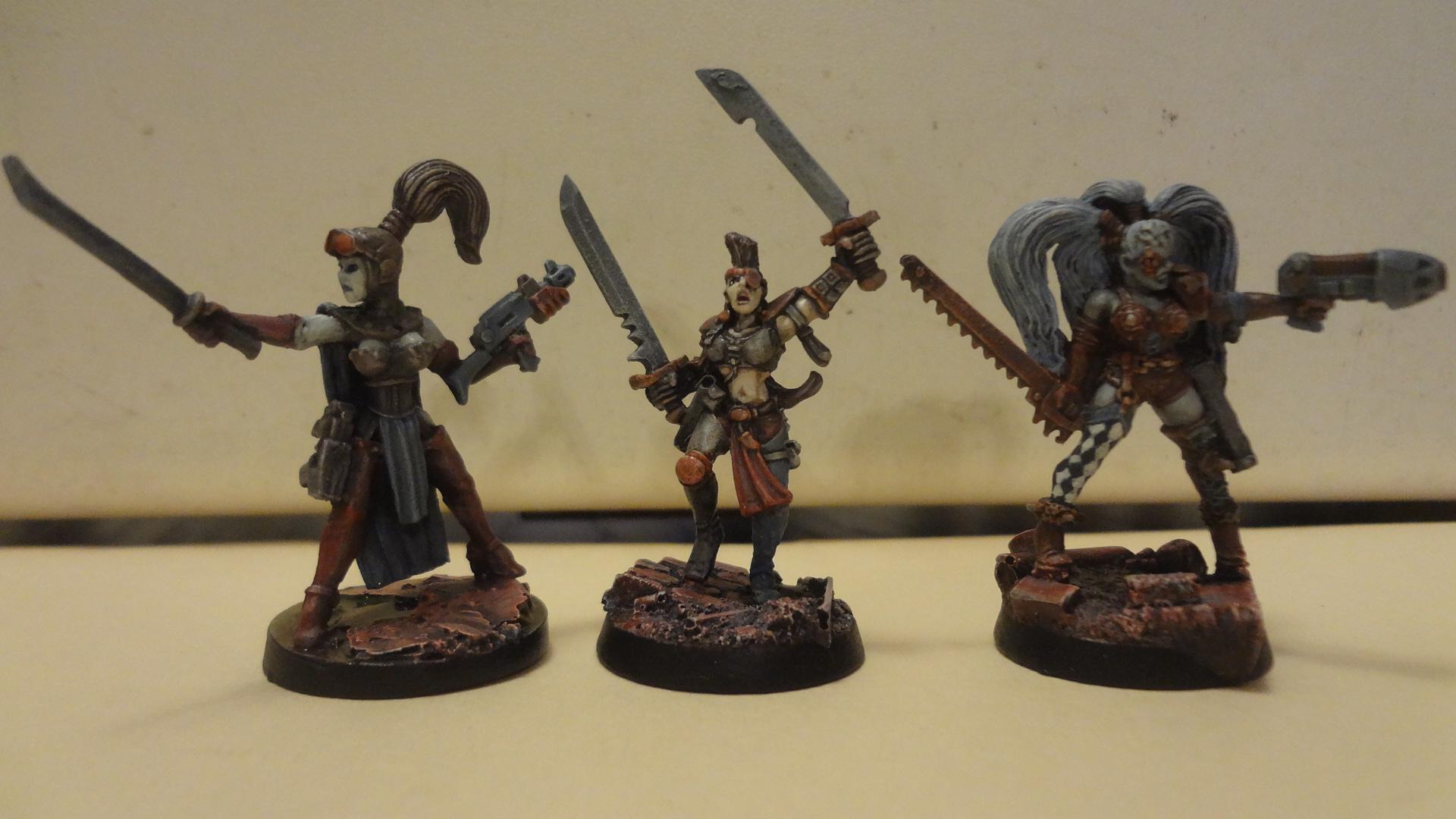 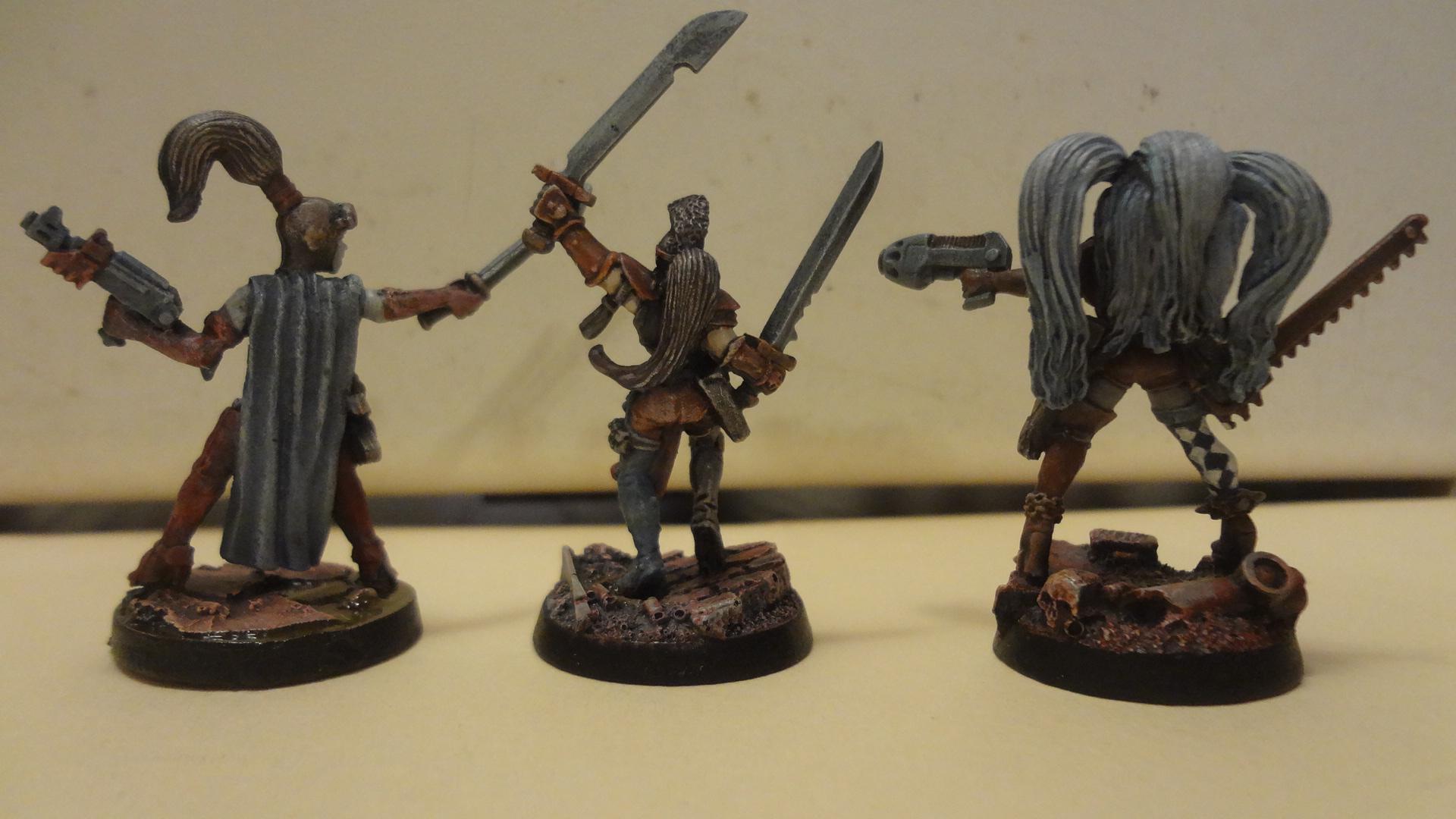 As a bonus, here's a neat figure I picked up from Mattias when he was selling off a few of his painted figures. Lots of potential uses for him (cultist, mage, mutant, you name it) in a variety of genres, but I particularly thought that in Necromunda he could be a Wyrd, which is a sort of independent magic user. He scales pretty well with an average ganger. Not sure of the manufacturer, but I'm pretty sure he's a vintage sculpt of some sort. 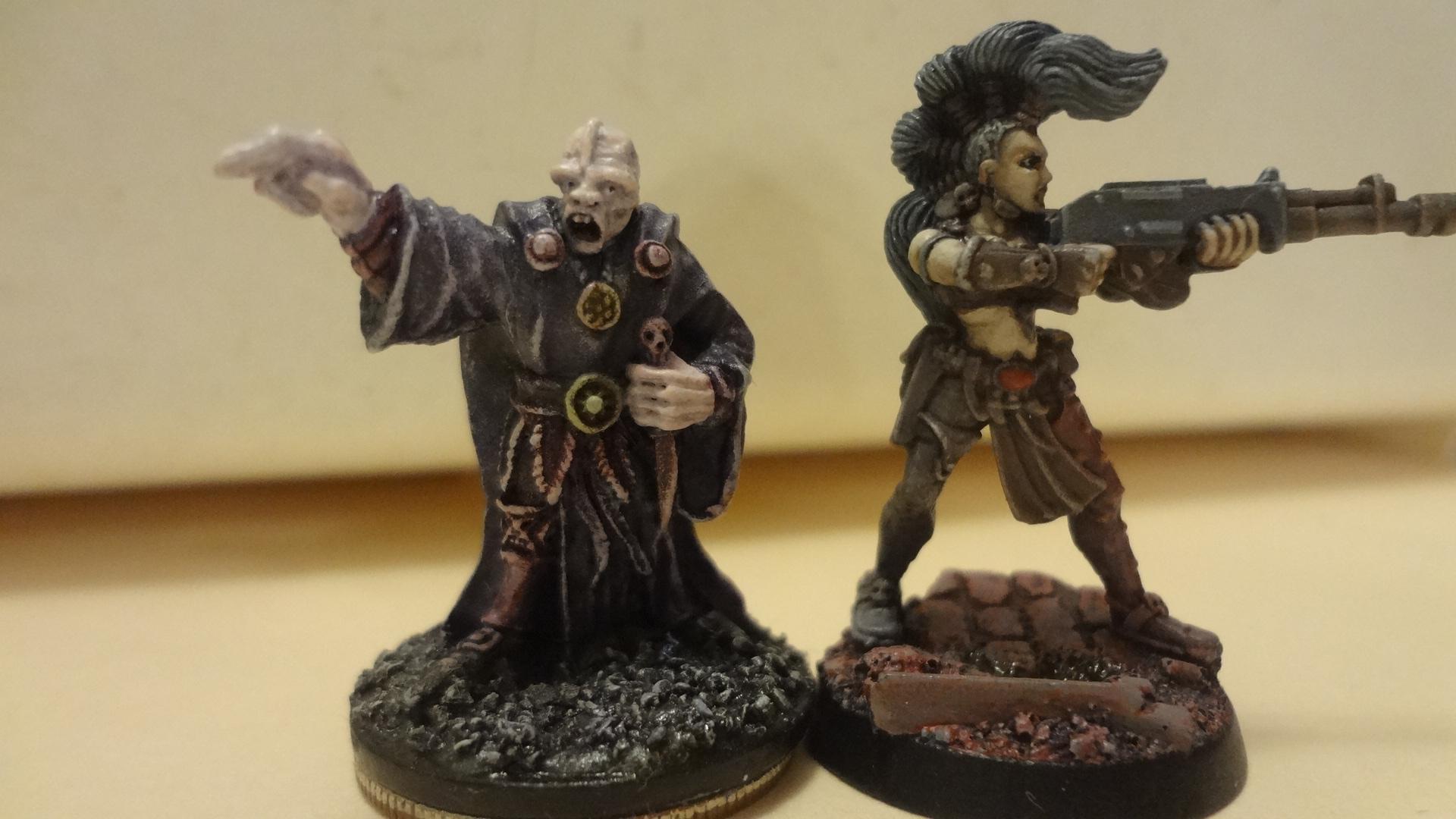 Lastly, my pictures have made the paint jobs slightly more muted than they appear in real life. Here's a shot with flash that washes out the figs a bit, but still shows off a bit more of the contrasts and certain details and reveals the wet effects on the bases. 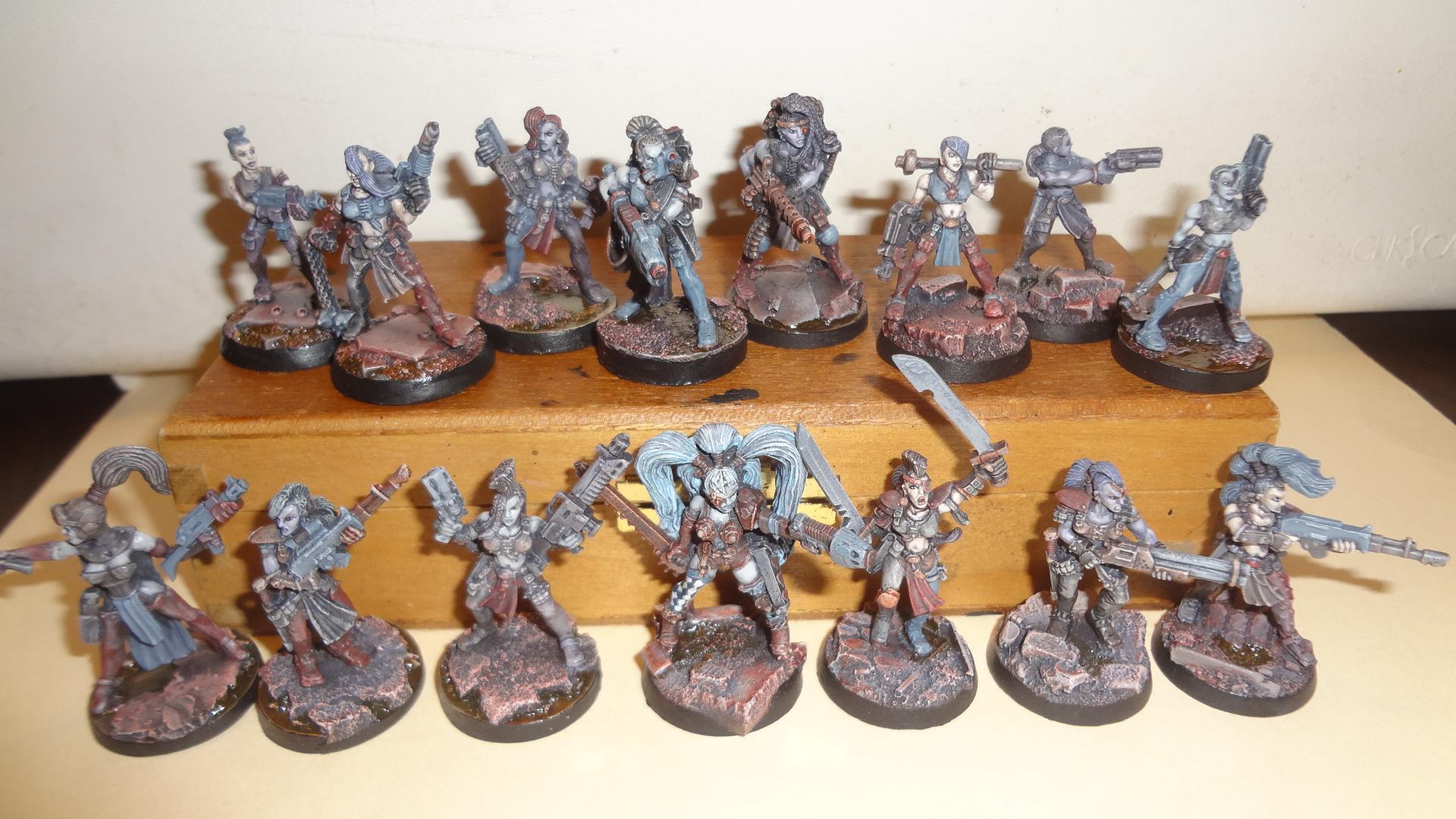 And there you have it! Fifteen excellently painted Escher figs with enough variety to cover most any gang arrangements. I'm very happy to have these, as the Escher have long been favorites of mine, but I never felt that my dip-based painting style would have been appropriate for these sculpts.