Josh and I left Chicago early Saturday morning to face delays from a road accident and pouring rain on an adventure farther into Wisconsin than Josh had yet dared to go. We arrived in Oshkosh to attend the initial Tabletop Minions Expo, a small convention put on by our friend Adam. 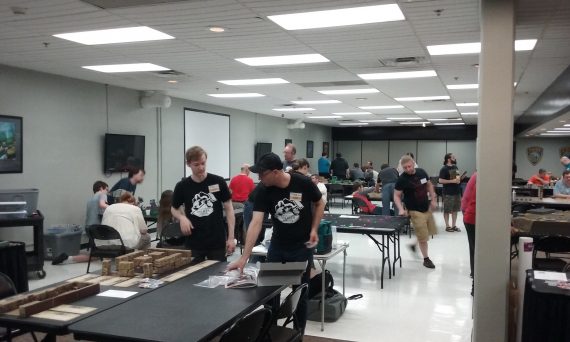 Here was the scene when we arrived. You can see Nick, the author of Broken Contract, a Star Wars Lego game, and Silent Death.  Way in the back you might be able to make out the jungle covered military base Josh had just set up, and the crowd gathered around Sam Lenz as he paints.

The first thing I played was a drop-in style game of Silent Death. I have never played it before, but have read the rules and wanted to try its peculiar dice mechanic. You roll three dice and add the results to see if you hit, but damage is based on the high, middle, or low result, depending on the power of the weapon. In this scenario, each player had one ship and a goal of doing eight points of damage to other ships before escaping off the board. I was able to do that, but just barely. 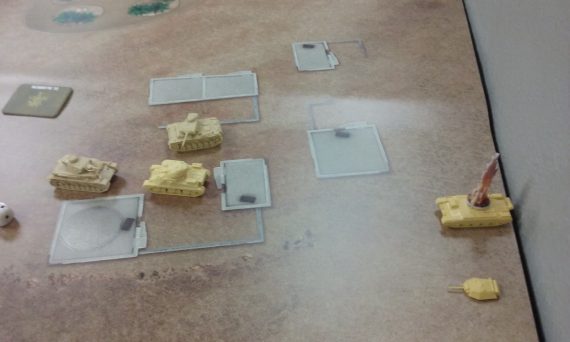 Next, Josh and I played a demo of the El Alamein starter set for Flames of War, put on by a group out of Kenosha called Battle Badgers. Josh played the British with three tanks to my two Germans. 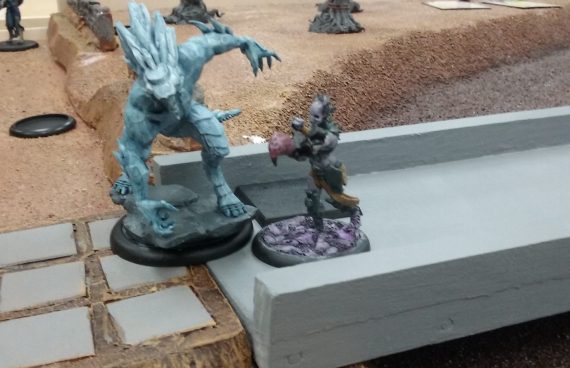 Later, we checked out Dark Age, which I had also been wanting to try for a while but never played before. We also got a short run through of Malifaux.

After that we ran our session of The Walking Dead All Out War and after dinner We played Test of Honour, which we had brought along to try if we had spare time.  You will see separate blog entries on each of those games.

Sorry I didn't take photos on Sunday, but we did have a lot of fun. First, we sat in on the Tabletop Minions Every-Other-Sunday Live Show. After that, Josh and I tried out Shattered Crown from Gaddis Gaming. It is a fast moving game set in a Weird World War One. We'll probably play a game of that on our own soon.  Our last game at the convention was to try Tanks with Lee from Gaddis Gaming. That was another game run by Battle Badgers, thanks guys! Tanks is fairly similar in its movement mechanics to Song of Blades and Heroes, but much more like X-Wing in its combat and initiative systems.

Battle Badgers and Tabletop Minions dice! This photo does not properly show off the awesome iridescent red marbling running through the Battle Badgers dice.

Of course, I can't neglect to mention the social parts of the convention like hanging out after hours with Adam, joining Lee and Susan from Gaddis Gaming for Sunday breakfast,  talking with various folks about other fun topics ranging from Star Trek films to Edward Gorey tattoos, and meeting a couple of other gamers from the Chicago suburbs, DeKalb, and various far flung locales.

On our way out of town, we stopped by Flying Phoenix Games, a local game store worth checking out any time you are in Oshkosh.  We are looking forward to returning to Oshkosh for TMX 2018.