As I dip my toes into the Weird War waters of Konflikt '47 I'm coming to appreciate the incredible latitude that "weird" allows the budget gamer. As has been seen in our recent Konflikt '47 battle reports, there's a huge range of miniatures that are suitable. From genre-specific Weird World War 2 (WWW2) lines like Dust, Secrets of the Third Reich, and Konflikt/Clockwork Goblin to historically-influenced sci-fi lines like AT-43, Wargames Factory Shock Troopers and Dreamforge Eisernkern, and of course the incredibly deep ranges of historical WW2 figures from companies like Black Tree Design (Harlequin), Artizan, Foundry, TAG, and many, many others. In some cases even some fantasy miniature lines may be useful if your campaign includes such popular weird war elements such as vampires, werewolves, demons and the occult.

However, there's a 4th source that should be looked into when building your WWW2 army...

It's not going to be much use for infantry figures but for the mecha, tanks and vehicles of WWW2 there are some good options worth exploring to quickly and cheaply add a boost to your force. Today I'll present one very accessible option as well as showcasing a couple lucky 2nd hand toy finds I've made. Jumping right in, I present to you the #729 Tim Mee Tank!

Introduced in 1964, you probably played with this tank at some point in your childhood. Ubiquitous in it's original USA-made Tim Mee branding and in countless knock-offs, it is said that this is possibly the most produced toy tank in the world. This reasonably realistic toy version of a US M48A2 Patton Main Battle Tank is perhaps often overlooked because of it's associaton with toy solidiers that average around 54mm (1/32), or 1/35 scale. However, the hull is just shy of 5 inches long and a bit over 2.5 inches wide and including turret it's around 2 inches tall. Depending on how you crunch the numbers, these tanks are between 1/48 and 1/56 in scale, making them nearly ideal for 28mm (1/56) wargaming as seen below. 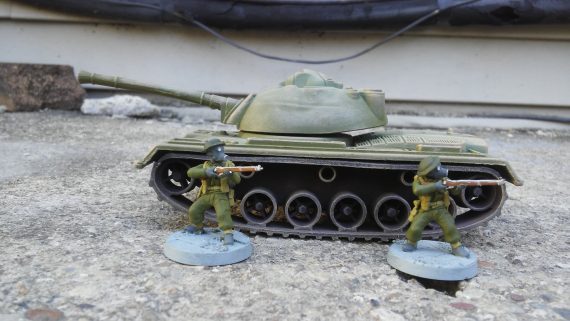 Mine are very simply painted, having used masking tape to enable the camo and wheel sections to be spray painted quickly with Krylon Camo paints which adhere pretty well to this soft plastic. After that they only got a tan drybrush and a spray of varnish. These began as simple test-beds for tank camo schemes but they painted up so easily and looked good enough after the tan drybrush that I decided they were worth sharing.

Note that I highly recommend washing them first. These are made of a soft polyproylyne plastic that is already hard to paint on. Follow the washing with a base spray of a plastic-specific paint such as Krylon Camoflage. I had some paint flake off in a couple small places, probably because I didn't wash them. If this happens, paint the flaked area with some super-glue and then paint over that.

I also pulled off the wheels and clipped away the wheel mounts.

When compared to a 1/56 Bolt Action Cromwell tank, it may at first appear excessively large, but the actual m48 is over 1/3 longer than the Cromwell and so the comparison is almost exactly to scale. 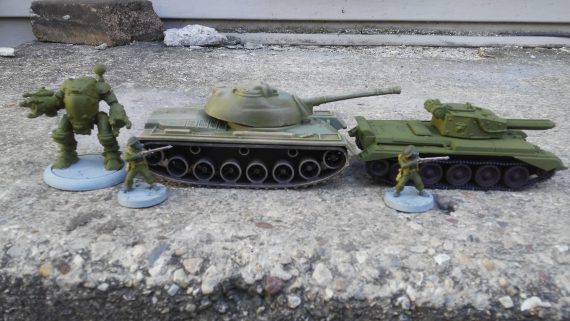 Then, there's the matter of historical correctness: With most WWW2 games being nominally placed in the 1940's, the M48 -which was introduced in 1953- may seem a bit out of place. However, WWW2 games usually have some sort of accelerated technology development, so bringing in a tank a few years early isn't entirely out of the question. Further, the M48 does have some visual similarities with an the late-war USA M26 Pershing tank, so for those willing to fudge the details, it's an acceptable proxy. Below you can see an M26 and M46, two of the predeessors of the M47 and M48 tanks.

The best part is that these are incredibly common and affordable. A pack of 3 of the premium USA Made Tim Mee versions can be had for around $18 shipped and there are a number of outlets that will sell them separately for around $6. This may seem like a lot for soft plastic army man tanks, but remember that's for a USA made product. Also, that's less than 1/3 the cost of for 1/56 scale tank models. And for those looking for a lower cost, second hand examples and/or knock-off imported versions can be had for much less. 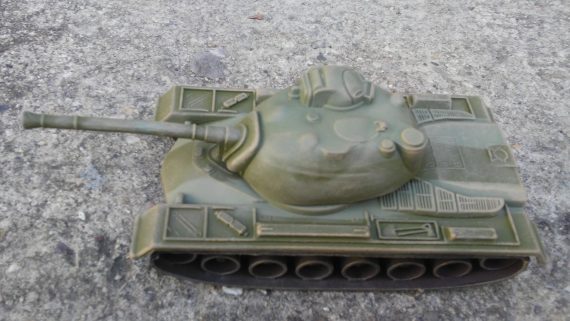 To wrap it up, here's two more good reasons to keep your eyes open at your local resale shop. The first is a toy German Tiger 1 tank from the 1990's GTI toy company. 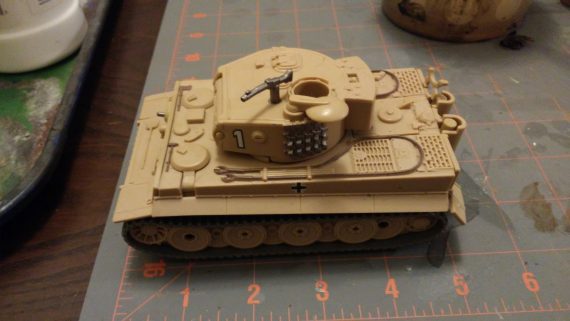 If found it without a barrel but it shouldn't be hard to scratchbuild something suitable. It's pretty close to 1/43 scale which is notably larger than 28mm. However, it's not too much different, and next to 28mm figures on bases it looks pretty good. Remember that the Tiger 1 was a beast at almost 10 feet tall!

It also has some neat opening hatches. 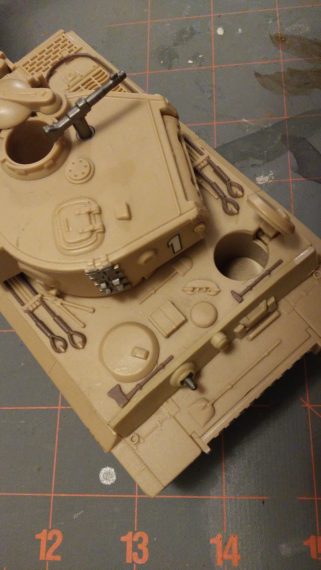 Not all are accurate and the pintle mounted machine gun is pretty crap, but the engine compatment is a nice touch. Overall it's a nice little toy that will look great on the table top with a coat of paint. Michael now has it so hopefully it will be painted up and making a tabletop appearance soon.

Lasly, here's one that appears to be an M26 with some minor elements of an M46. Originally it was an RC controled tank of some sort, but I found it at the resale shop without it's controller. It is also close to 1/43, has some light ports that will have to be removed or covered up and a few other minor shortcomings. Still, like the Tiger 1, it will pobably look just fine on the tabletop after a coat of paint. 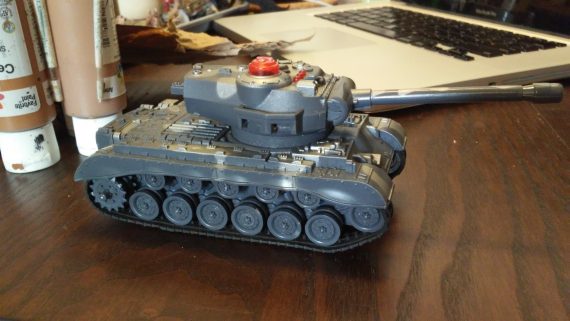 This is of course just a starting point. There are a fair number of 1/50, 1/48 and 1/43 scale ww2 toys out there from compaines like Maisto, Dinky, Corgi and other less-known brands. Since the very nature of Weird WW2 does away with the need for perfect historical accuracy, even toys with minor inaccuracies or slight scale differences can look great on the tabletop and can often be had for a fraction of the price of wargaming models.