After buying and reviewing the Harry Potter Nanofigs line I couldn't resist getting the corresponding playset. 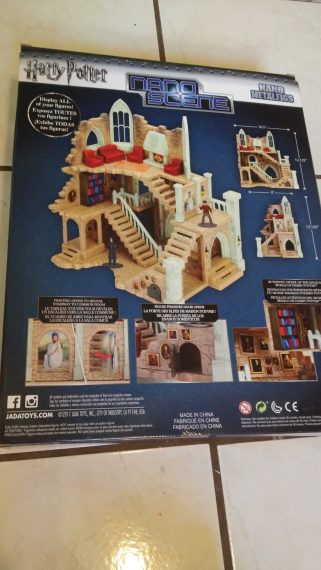 This Gryffindor Tower playset retails for $25-30 and is widely available at WalMart or online. While it has some shortcomings, there is much to recommend this set to the wargamer or roleplayer. 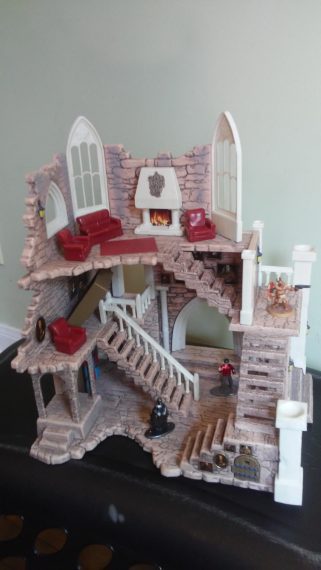 Let's start with the shortcomings. This is essentially a stage set.  That is to say, it has no back. 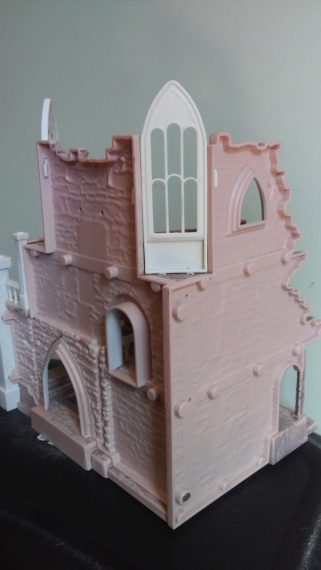 Though packed with detail from the front, the back is a typical recessed, void.  If used as a ruined building in games like Frostgrave or Mordheim it would either have to be placed in the corner of the table or some sort of back would have to be added. The otherwise nicely sculpted chairs and couch have the same issue.

The only other shortcomings are some poor painting of the fireplace detail, the white sections which have much less wash/shading than the brick sections...

...and the rather mediocre sculpting/paintjob on poor Harry. I think his blob-shaped hand is perhaps supposed to be holding the Sorcerers Stone. Or maybe directing traffic? 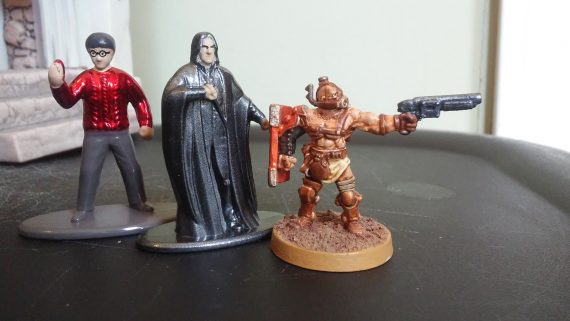 The Snape figure is rather good though and this playset might be the only way to acquire him.

Now that's out of the way, let's have a look at what this set does have to offer. First off, it's quite impressive. It assembles easily and all the parts fit very tightly. Very tightly, in fact to the point where I don't think it can be un-assmbled without damage. It appears to be made from a hard polystyrene plastic which does make it a good candidate for modification and improvement. 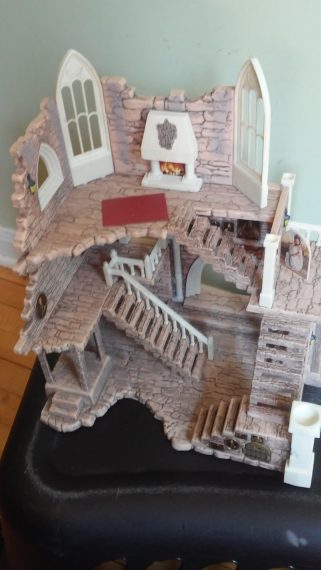 Multi leveled, and well detailed, it's a perfect setting for an RPG encounter or a small wargaming skirmish. 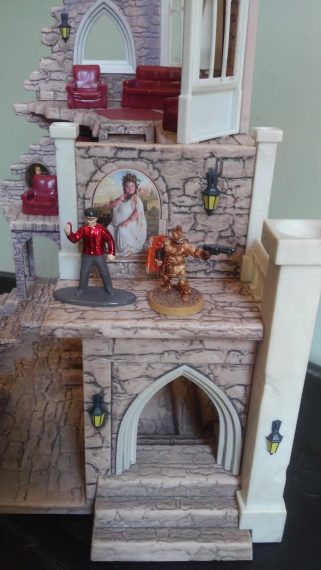 Though built for 38mm Nanofigs, it's quite a good fit for 28mm such as this Urban Mammoth Gladiator. 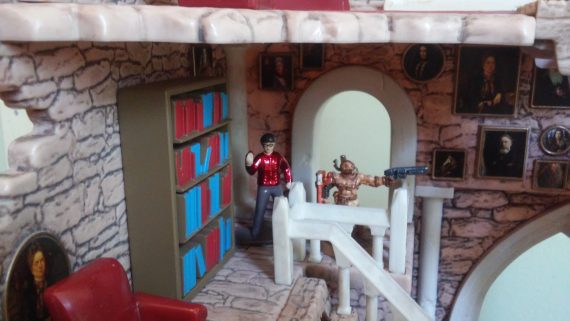 With a bit of enlargement, the stair slots might be expandable enough for a standard wargaming base allowing figures to be placed virtually anywhere. 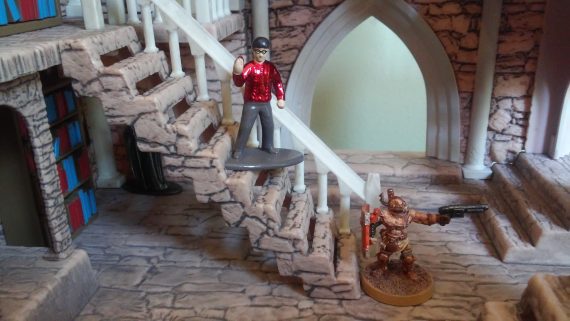 I'm normally not a big fan of stickers, but the portrait stickers are quite nice. Even if not gaming the HP universe, I suspect that many gamers will apply them anyway. There are some repeats, but it's a nice selection of oil paintings. 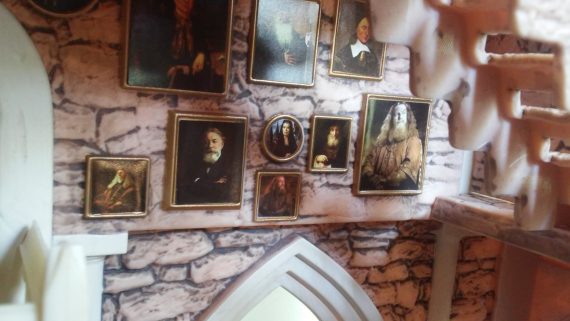 This House-Elf door/room is a nice touch from the books that was largely missing from the films.

The 2 bookcases are simple, but nicely done and unlike the other furniture they have a back piece. It is an extremely useful piece of scatter terrain. 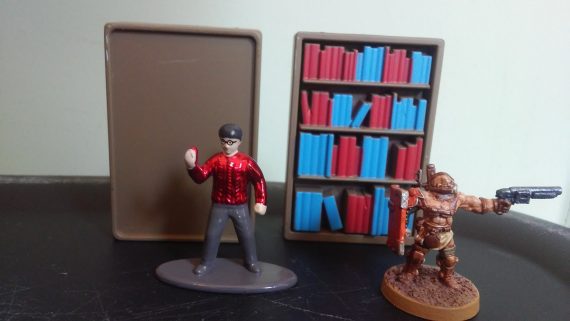 Other neat features abound such as the opening fat lady's portrait... 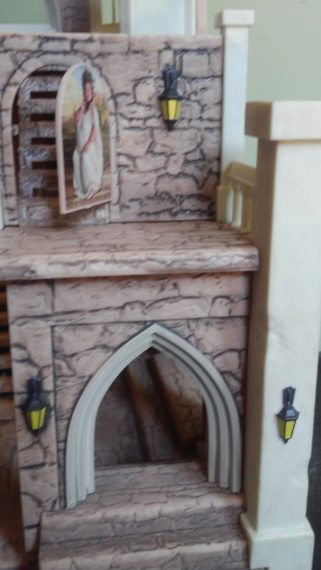 The jagged stone edges of the floors and walls do lend the playset well to being used as a ruin,

and despite the one-sided nature of the walls, the stonework is quite well sculpted. 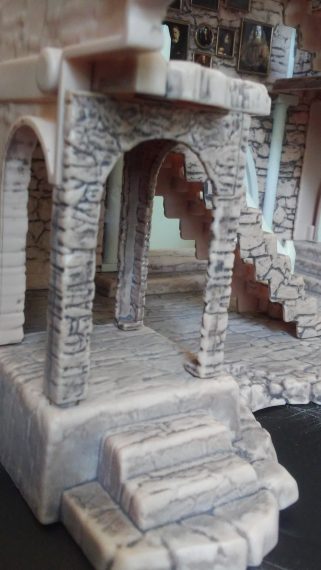 Most of the paintwork is just washes, but combined with the appropriate plastic colors the effect is quite good looking. Some gamers will be tempted to repaint, but I have a feeling that most would opt to just use it as-is perhaps with a bit of attention paid to the white marble sections. 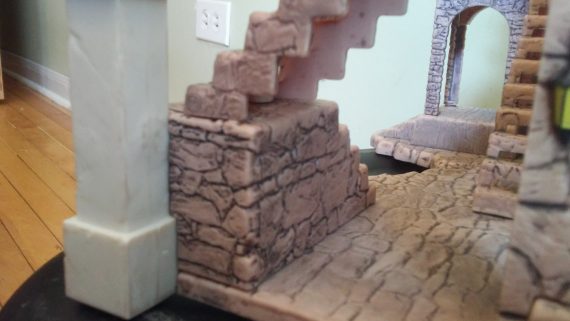 And there you have it.  A very large but affordable, pre-painted locale that assembles easily and quckly and is ready out-of-the-box for a wargaming or RPG encounter. Pretty impressive and that's to say nothing of it being the perfect place to play or display the Harry Potter Nano Metalfigs for which it was designed or the usefulness of purchasing it with the intention of kitbashing it into some other wargaming purpose. 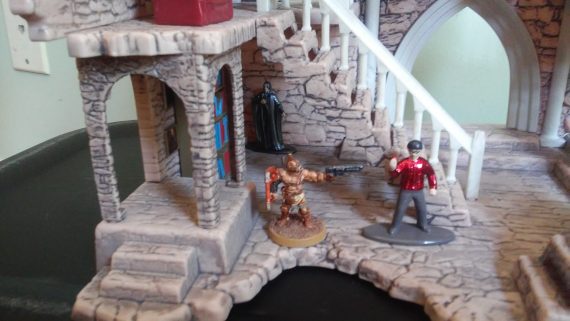 Honestly, with my many other gaming projects, I'm not sure when this will make it to the table. Still, I'm glad to have it and with the HP Nanofigs I hope to put together some sort of Harry Potter wargame for the family. I recommend that anyone interested in this playset get one fairly quickly. These kind of affordable playsets often don't stick around long and it'd be a shame to miss the chance to acquire one.