The Light Ahead (The Walking Dead Campaign: Shawn’s Tale)

(Editor's note: This is a short story that takes place after Chapter 1 of our Walking Dead Campaign.) 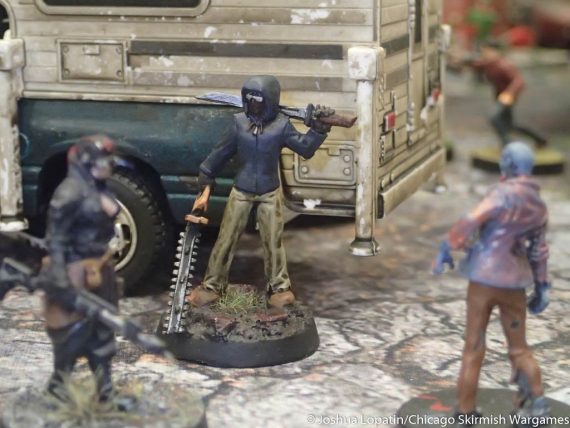 "Get off me motherf-cker!"
A lean, young man tosses off a punch. The creature's head bounces back forcefully, bruised and moulded the way only decaying flesh is prone to do.
The creature stumbles back, it's exposed jaws clacking like a ridiculous set of toy dentures winding down as it bounces along; the exception being that these things didn't seem to ever wind down. They keep walking...and feeding.
There is a flash, as distant thunder rumbles steadily.
Suddenly, the young man, now a young boy is fending off another assailant.
"Hah! Whatsa matter Shawney. Too much for you, you pu--y?"
"F-ck you! Gimme back my gear!"
"Oh, your 'gear'. What do you think you are, some kinda ninja warrior? I'll tell you what you are. Nothin'. Just some punkass wannabe. Momma ain't never loved you. She jus' took you in 'cause she had to. 'Cause yo momma dead."
Shawn pulls his elbow back, the pectorals flex in slow motion like a Nature video on wildcats and his arm springs forward catching his assailant square in the jaw. He crumbles to the ground.
At first, Shawn is proud. He's tested his mettle, battle-ready and unafraid. But then, it creeps in. Samuel's body, laying on the ground. Unmoving.
"Oh sh-t...what did I do? Sam? Sam? You ok?"

They say the fear guilt brings is the ultimate manifestation of fear itself. It's an internal fear. Inescapable, unlike a physical threat. Fight or flight doesn't apply when fear is within. You can't run from yourself.

With a tiny twitch, Sam begins to stir. Shawn is slightly relieved, but knows Sam will be mad as hell when he gets up, and Shawn knows he's got to get out of there. He runs. He's spent his life fighting and running.

With a quick jab of his sword, he penetrates the walker's skull. It tumbles down with a gutteral groan. The dark tunnel seems endless. He hears the moans and shuffling, but in pitch black it's hard to distinguish the exact direction. He immediately regrets entering the tunnel system, but what choice did he really have? The horde was behind them. His companions were all headed towards the tunnels, and, well, when in Rome.
"Yo, Geena, where you at?"
"Right here. I think I see light over there."
She nudges his shoulder over to the left. He spots the outline. Maybe a door slightly off hinge.
His companions immediately direct their movement towards their potential escape but can barely make out a cluster of silhouetted humanoids in their way.
"God dammit, they're there too!"
"But we need to get to that door! We're f-cking toast if we stay in here," Jade rambles.
Jade was a funny one, Shawn thought. The way she hacked through walkers with a hand saw, laughing gleefully. It was almost as if she really enjoyed this world in shambles. Maybe too much.
In some ways, Shawn enjoyed it too.

The trio brought their hand weapons to the ready point and charged forward. With a quick overhead chop, Jade's saw embedded it's teeth in a walker's skull. She pulled it back quickly though, keeping it from getting compressed within the ooozing gap, and with a thick soled boot, kicked the body to the ground.
"These things didn't need respect. They're just things," thought Shawn to himself.
He treated them as such. With a slashing motion, he lopped two heads off. He often wondered about how long a disembodied walker head could last without eating.

Geena, preoccupied with slamming the butt of her rifle over and over as a walker's face turned to paste failed to notice another shambling towards her flank. It's disemboweled intestines dangled and glistened like grisly tinsel. With a bestial groan it extended it's jaws to an inhuman proportion, hoping to clamp down and grab a fleshy chunk fitting to it's hunger.
"G! Watch it!"
Shawn lunged forward, impaling it's chin on his blade. With a jerk he shoved it further upwards, through the rotted cavernous mouth and in to the brain space. Jokingly, he moved it around like a demented mannequin.
"C'mon and give Uncle Slimey a kiss, G. Muah!"
"F-ck you Shawn. Get that away from me."
Shawn smirks and controls his laughter. Not all nightmares have to be somber.

It started with the families. Shawn's memories briefly materialized. He remembered those times where Samuel berated and bullied him until he fought back. Except, one day, Samuel with a glazed expression attacked him for no apparent reason. Shawn fought, pushing him to the ground.
"Sam, what the f-ck is wrong with you?"
Sam kept crawling towards him. Shawn kicked his body aside. Sam wouldn't stop; moaning and writhing and...biting. Shawn wanted to run. He wanted to just leave his step-brother. But he had the inkling that, if he just left him, perhaps some other explorer would run in to him and not fare as well. He grabbed a piece of glass from a jar shattered during their brawl, slicing his hand in the process. He still had the scars from that. He jammed it through the back of Sam's head as he lay prone inching his way towards him. He stopped moving. His parents would be furious, he thought to himself...if he hadn't been forced to do something similar to them earlier that day.
It didn't stop there. People everywhere weren't normal anymore. They didn't taunt him, or try to sell him bullsh-t glamor magazine subscriptions, or flick him off in traffic. They didn't seem to do much of anything, except shuffle along and gorge themselves on viscera. Without pity, without remorse.
He remembered that day, and the lessons it brought. When he gave up on those concepts, when it all changed, when he had to change.
"They're just things....they're just things..." he sobbed to himself, rocking and gripping his forehead, sitting on the blood stained floor. Sometimes the true path to adulthood is lubricated by both blood and tears.

"Back to reality space cadet," called Jade.
She kicked open the door and a massive flood of light entered the tunnel. A chorus of moans was unleashed as the three looked behind them and saw just how many walkers loomed within this tunnel. It was miraculous that they managed to pass through in the dark without being shredded by the wretched gauntlet.

"Guys, what about those other people from the city?" Geena remarked.
"They went down the other bypass tunnel. That led out to the trainyard." Shawn replied.
"Shouldn't we have followed them," questioned Jade.
"Naw. They'll make it. I've got a...feeling...about them folks. We'll catch up to them at the draw point. And, sh-t, if they don't make it...remember, they're just things."
Shawn flashed a wolfish smile, his teeth sparkled in the sunlight as their eyes adjusted.

The tunnel door slammed behind them.

General · campaigns, The Walking Dead All Out War, urban, zombies

One response to “The Light Ahead (The Walking Dead Campaign: Shawn’s Tale)”