AAR- The Imprudent Kidnappers: A Song of Blades and Heroes Battle Report

A recent Song of Blades and Heroes game with my son became an impromptu scenario creation session when he presented me with a table full of forest with a river and bridge on one side. On the spot I made up scenario- The Imprudent Kidnappers  -which I recommend briefly reading over to understand what follows a bit better. It proved to be a good way to teach him about group activations and firing, which became quite important in our game.

It was a real blast of nostalgia for me as I used two warbands from the early days of Chicago Skirmish Wargames.

I was playing the attacking force using some of the first miniatures I painted for my "Night Herons of the Black Crown" warband. A force which ended up growing over the years from Song of Blades and Heroes warband, to platoon size for Dragon Rampant and Of Gods and Mortals and eventually to the massive Chaos Warriors army I've been fielding as Varangur in Kings of War. A slightly modified GW Chaos Champion leads a trio of Grenadier Chaos Warriors. A Reaper Barbarian and Eastern Front Studios Ogre complete the crew.

The defenders are another warband from the early years of CSW. Made entirely from 1980's and 90's classic GW Wood Elf sculpts painted up for one of our campaign as the "Deep Woods Vengers", a force which would later be grown into the 1200 point (SBH points) "Union of the  Green" which also included animals and animal people and some large forest personalities. All have the Forester ability and for the purposes of the scenario -in contravention of the usual SBH rules- they were allowed to move after attacking or shooting.

Read the scenario linked above for details, but suffice to say it is an 8 turn game where the attackers were out to kidnap an elf and the defending elves were aiming to drive off the attackers by destroying at least half the warband.

Both sides chose to setup grouped.

The attackers entered from the bridge as proscribed by the scenario...

... and made straight for the Elves.

The elves made a quick shot at them from the cover of trees....

...knocking down one of the warriors before retreating again.

The Chaos forces finally managed to close with the slippery elves.

However, a surprise gruesome kill by the Elves sent their entire warband fleeing, including the leader who wound up in the clutches of the enchanted river.

The leader escaped the river and the evil band regrouped to charge back against the Elves who -emboldened by their previous engagement- choose to stand and fight.

The invaders almost immediately manage to defeat and kidnap an elf. A chaos warrior swings him over his shoulder.

He passes the elf to the leader who at this point has a pretty good chance of getting him off the board in time.

The elves are having none of it though and one lowly elf knocks the Chaos Champion leader to the ground, forcing him to drop the kidnapped elf and denying the attackers the chance to win the day.

With the Invaders still present in force and the Elves having prevented a kidnapping, the final result was a draw. One presumes that the Elves melted away into the woods and the Chaos warriors retreat from the enchanted forest temporarily chastened.

This was quite alot of fun and I was surprised how effective the on-the-fly scenario was. It was a tight game right until the end and when I officialy wrote up the scenario I didn't change anything of how we played it. Rather, I just added details to cover situations that might arise and to clarify various aspects of play.

This was also one of the first uses of the magnetized tree bases that I recently acquired from Josh. It's incredibly handy to be able to pull trees from areas of forest as the miniatures move through and visually pleasing to be able to temporarily replace them with plugs that match the base texture paint. Between these and our combined stock of Lemax pine trees I'm definitely well set for forested games.

Lastly, it's also nice to see that after more than a decade Song of Blades and Heroes remains an eminently fun and playable game that can still accommodate new and interesting scenarios. If you still haven't tried SoBH, it's never too late to do so!

PS. As a bonus, here's pictures of larger versions of these Warbands from years past. They are prime examples of the sort of random used bargain lead we used to (and often still) build our forces from. Nearly all the figures in these pictures were gifts from other gamers, pulled from random bins of cheap figures at Little Wars or found at Games Plus Auctions. There are at least 8 different brands represented here spanning almost 30 years of production and the only non-metal figures are the Safari brand Paint-and-Play Dragon and the Mage Knight unicorn the GW Elf is riding on. 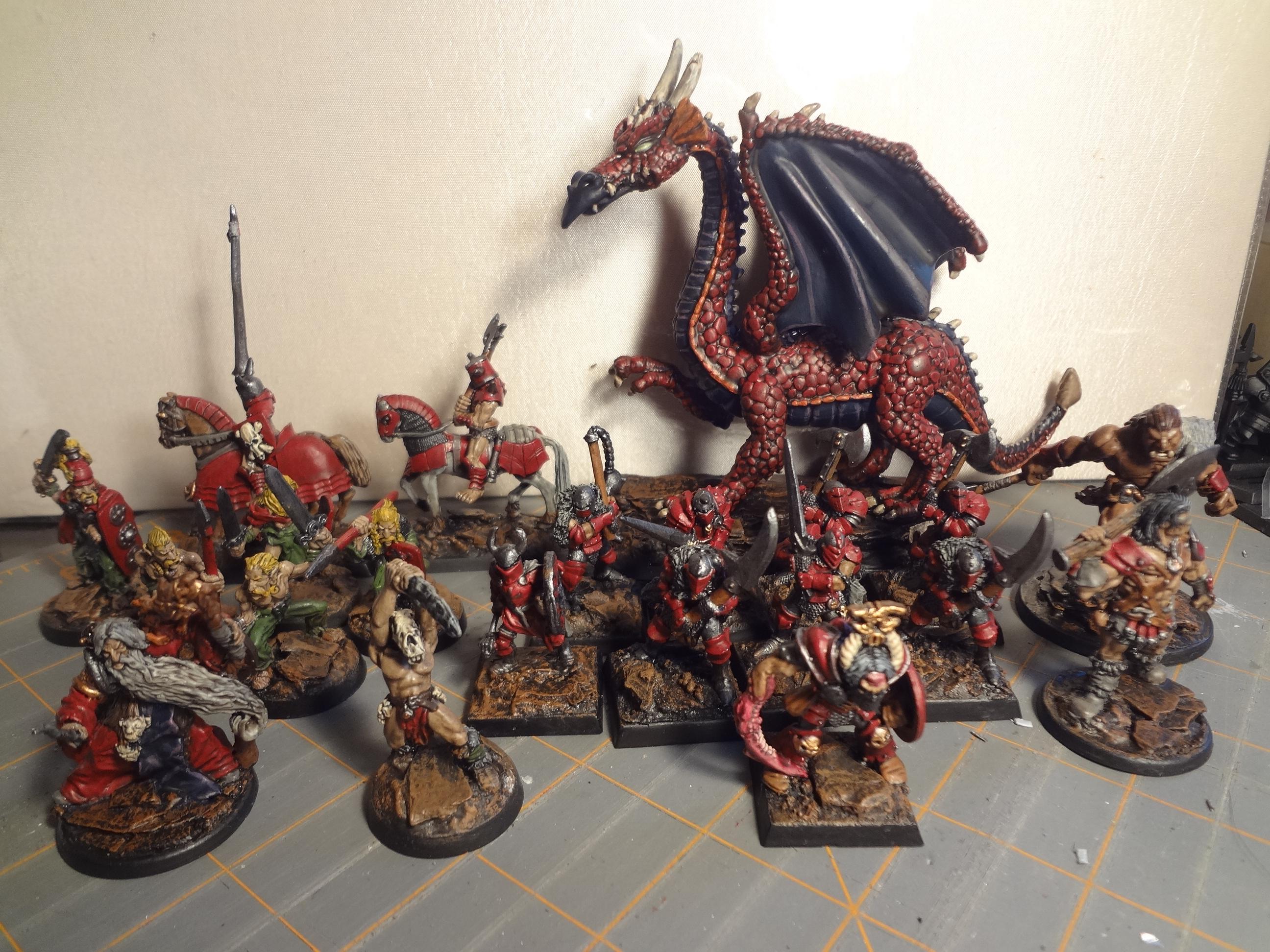