“This Is Not A Test” Now Available! 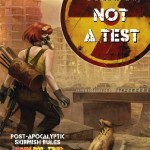 Back in 2013 our club had the opportunity to playtest a new post-apocalyptic ruleset under development. We had a lot of fun offering feedback on “This Is Not A Test” from World’s End Publishing, and now we’re pleased to see that the game is available for purchase. The PDF is available right now, and plans ... Read more

The Dogs & the Dust Homebrew Sci-Fi 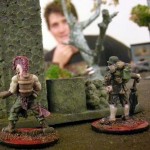 Last week Mattias and I huddled up in his apartment to try out The Dogs & the Dust, the homebrew sci-fi game that he is writing. Though it’s still a work-in-progress, Mattias (pictured above) plans to publish the completed game one day in the not-too-distant future. The “alpha” version that we playtested gave a good ... Read more

Karl and I managed to find a free evening last week to play a second game of Nuclear Renaissance, the post-apocalyptic skirmish game from Ramshackle Games. We’re pretty excited about this game, as it gives us an excuse to use our prodigious collection of post-apoc vehicles and figures in a fast-playing skirmish ruleset. Our first ... Read more

CSW comrade Mattias, whose grim hunchymen faced off against Pat’s dwarves in a Song of Blades & Heroes game late last year, recently published a wondrous two-page supplement that’s sure to jazz up your fantasy games. Arcane and Deadly Objects is a random table of wily, vile and downright delicious equipment to use in your SBH ... Read more 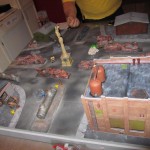 This week the club got together to playtest Neutron York 3000 as a potential ruleset for our post-apocalyptic campaign. NY3K is a fast paced warband-size skirmish game set in a pulpy post-apocalyptic future. It has it’s own fluff, factions and even a small miniatures line, but also has a unit creation mechanic that allows you ... Read more 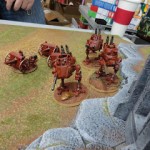 At last week’s club game night, Jon and I had a chance to try out the Warpath ruleset by Mantic Games. We completely forgot a few things (such as modifiers for shooting at units that have moved, etc), but in general we got a pretty good handle on the rules. After the game report, I’ll ... Read more 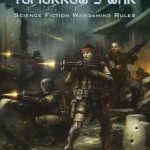 Tomorrow’s War, the new hard sci-fi tabletop wargame from Ambush Alley Games and Osprey Publishing, is something of a hybrid. It’s not a skirmish game where individually armed soldiers move around the battlefield on their own initiative, nor is it a stand-based game like Alien Squad Leader, where the smallest unit is a base of ... Read more