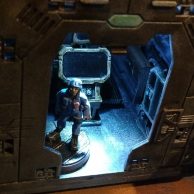 It’s finally done! The toybashed Paw Patrol resale shop find is now a fully functional Dual-Scale spaceship! Lets take a look at the exterior. Close up showing the paintwork which is mostly light layers of spray paint with lots of drybrushing of black and tan smudges for weathering and scorch marks. Black Washes also in ... Read more 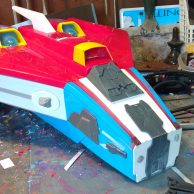 It’s been a couple years since I built any large 1:56 Spacecraft. I sold the three spacecraft that I built previously -and detailed on this blog- but with Adepticon coming at the end of the week, I’m in overdrive building another centerpiece for my Mech Attack Game. I’m turning a Paw Patrol flyer (“Super PAWs, ... Read more