Just finished up the first game ever with my 5 Year old son!

I used a slightly simplified version of the "StarCrashers" ruleset from Ironhands.com.
http://www.ironhands.com/starcrashers.htm
It's a nice simple game that focuses mostly on exploration via the revealing of blips but also has combat. Written for use with measuring sticks but I modified it for use with a hex grid. Also, instead of giving each ship 2 actions I gave them one move and other actions (attacking, revealing,etc) simply occured as they became possible.

Here's an overall view of the game. All units started from the neutral yellow starbase. My son is playing the ships he painted and I'm playing the two that have been spray painted blue. 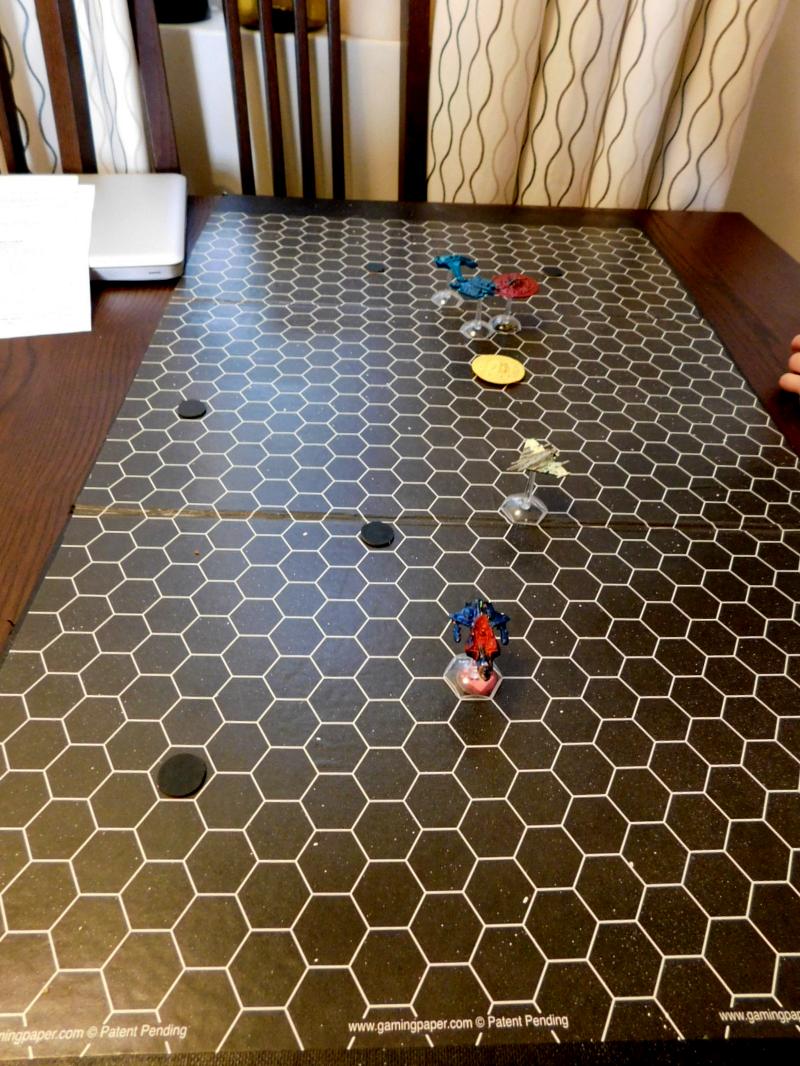 My son goes to investigate a blip and finds the "Emmisary" (currently under the base) which will net him one credit when he is returned to the starbase. 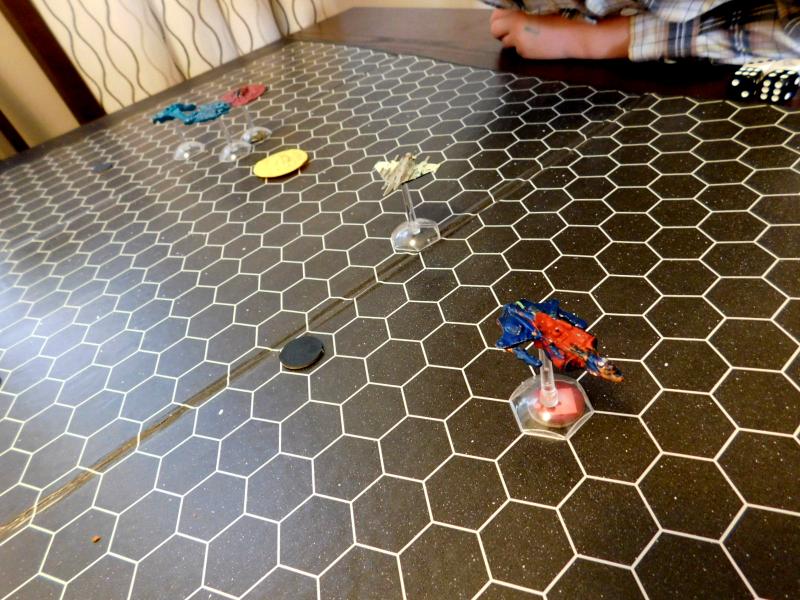 I reveal a blip and it turns out to be a pirate ship (red ship). My ship is crippled by the pirate and one credit is looted away from me but my compatriot cripples the Pirate and takes the credit back and earns a credit for crippling it. 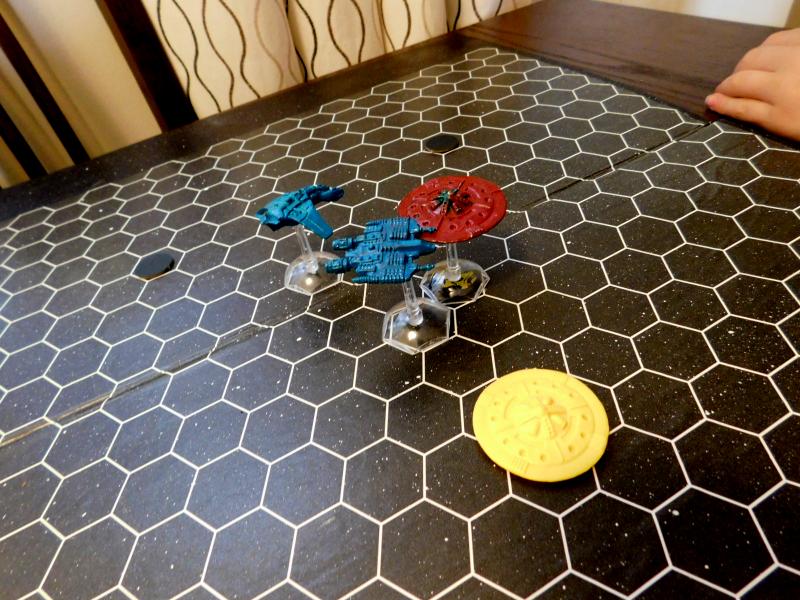 A couple of turns later one of my ships reveals a blip and gets sucked into a black hole where it spends the rest of the game trying to escape. 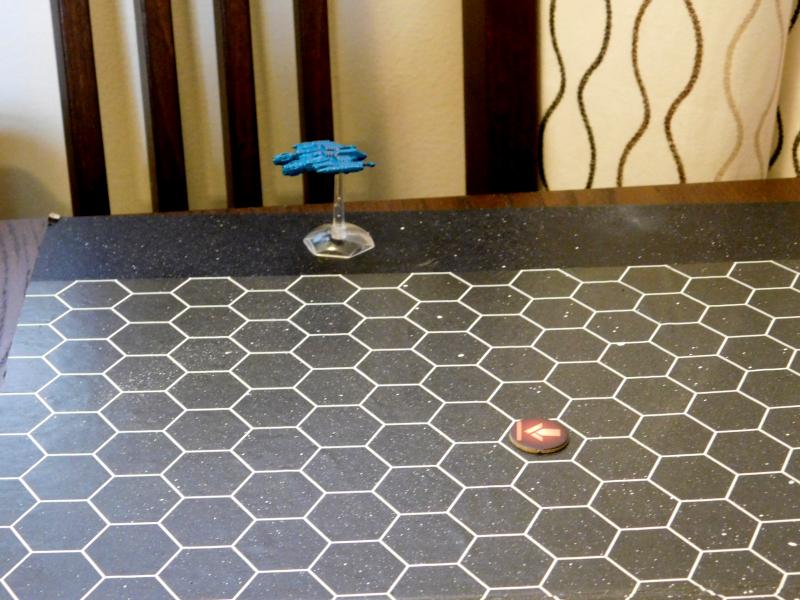 The end of the game turned into a race for the last blip. I got there first but the blip turned out to be another pirate who promptly crippled my ship and looted a credit from me. My son crippled the Pirate in the next turn netting him the credit for the ship and the credit the Pirate had stolen. The game ended with him defeating me 8 to 4. 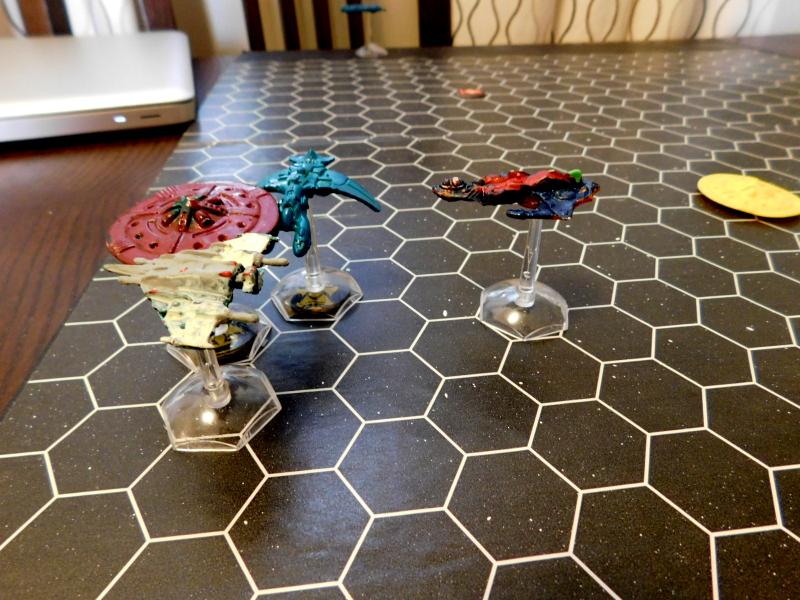 All in all it was a fun little game. It probably took us about 25 minutes to play. We only had 2 ships per side and 8 blips and the game could easily handle more of each. The game swung back and forth as we flipped blips resolved the situations and collected our credits. I think I would like to make an even larger board for next time.

I'm pretty happy with the ships too. They're cheap and probably polyethylene (use plastic-specific paint to prime) but they look pretty good and come in almost enough varieties (7 vs 8) to cover the ship types in Starcrashers. Plus, a bag of 144 gives me enough to use for the game, share with my friends, plenty for the kids to play with and all for about the cost of one gaming model.

Here's some of the counters we used for "blips" representing. Mines, Asteroids, Black Holes, Ray Storms, Pirates, Credits and others. 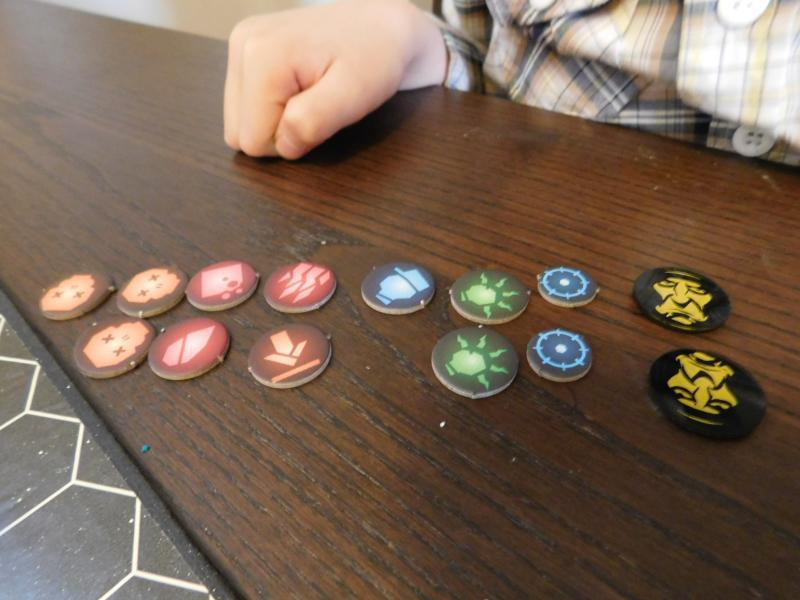 For those interested in the game components:
-The ships were from a bag of 144 cheap toy starships http://www.amazon.com/Pack-144-Space-Sh ... spaceships
They've been extensively reviewed here:
http://www.dakkadakka.com/dakkaforum/po ... 89209.page
- I mounted them on EM4 flight stands which are quite affordable at around 10 cents each.
http://www.em4miniatures.com/acatalog/M ... BASES.html
-The board was a second hand Axis and Allies board. I glued "Gaming Paper" (basically thin gift wrap) black hex paper to the back side and flicked on a bit of white paint for the star background. http://www.miniaturemarket.com/ggp0302.html
-The Counters are mostly from the "Sedition Wars" game (a great deal currently at $30 for 50 figures and a game)
http://www.amazon.com/Sedition-Wars-Bat ... ition+Wars
-Karl
Top

At my son's request we played again tonight.

Upped it to 3 different ships per side, 12 blips and used the proper 2-actions per ship rules. To keep the blips random we took 2 of each kind and 4 pirates. Then we turned them face down and he randomly picked 12 which we took turns placing. He seemed to enjoy being involved in the preparation.

Gameplay was easy peasy and took about 30 minutes. He had to be reminded of the special ability of each ship, but other than that it was very simple. Putting a corresponding blip on the page next to each description helped me remember which was which also.

He won again 8-6, though I did stop to help him repair one of his ships. I might not be so nice next time...
-Karl
Top

This sounds fantastic! Thanks for sharing.
Top

Played a third time. Except for the fact that I just realized we've been doing combat wrong and acommodating the hexes we're almost playing the rules as written.

No additional pics, but I've got some additions in the work.

-Had an extra trivial pursuit board and 3 of the four quarters covered with the hex paper made a board extension that added 50% to the board space.

-2 more factions of 6 basecoated. Tan and Grey for a total of 5 (rainbow painted by my kid, blue, aqua, tan and grey). Only each of the 6 ships that are worth using. These are the ships that come in the bag. 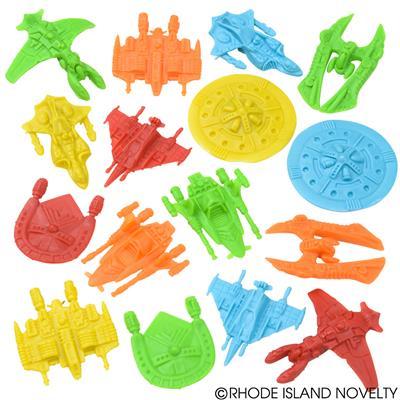 The horseshoe crab looking one is particularly weak (looks like a dwarf head with braids) and one of them is an airspeeder in aprox 20mm scale. Not a huge fan of the saucer either, but I'm using them. With 2 more ship types (see below) I'll have enough different ships to represent the 8 different types in the Starcrashers rules.

-I also broke down and ordered 3 sprues of the EM4 Silent Death Spaceships.

http://www.em4miniatures.com/acatalog/S ... ction.html
They are notably smaller than the 144 ships. 3 of the sculpts in the 144 pack are actually upsized clone versions of these. Each ship on the em4 sprue is unique but it looks like each sprue has 2 ships in 6 general styles. They'll end up being my fighters and bombers. That will provide 3 of each for each faction which should be enough and will give each faction a slightly different look.

Oh, I finally won a game but he's still asking to play again and he wants to paint more spaceshps!
-Karl
Top

Just found this in my piles of gaming stuff. I think I built it a long time ago intending to paint it up for Full Thrust. It used to have a flight base, but that's long gone. It will be the Starbase for Starcrashers, one of the most important elements of the game. 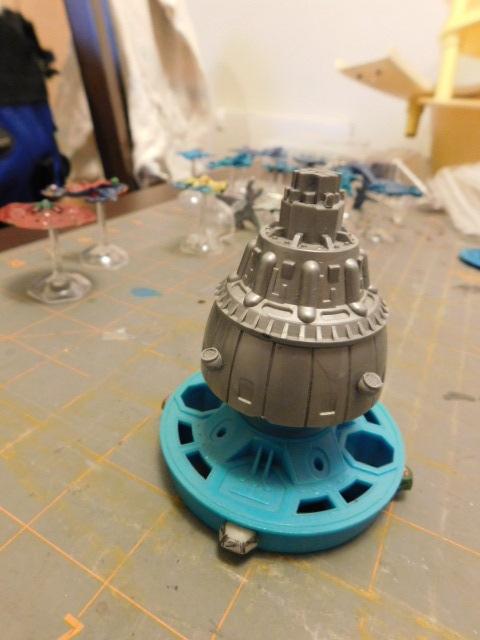 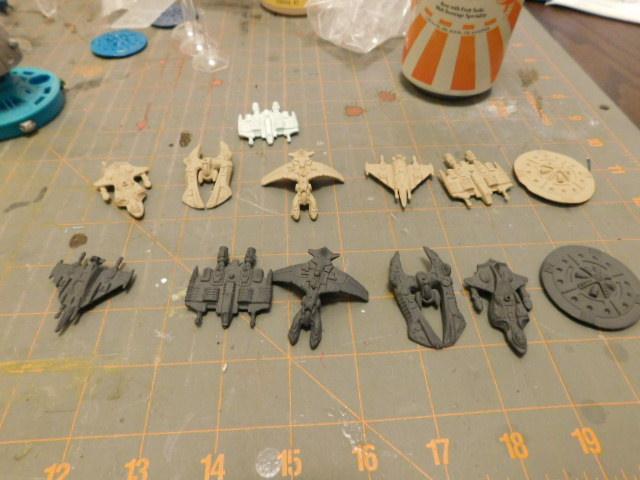 Here's the ships my son painted up. 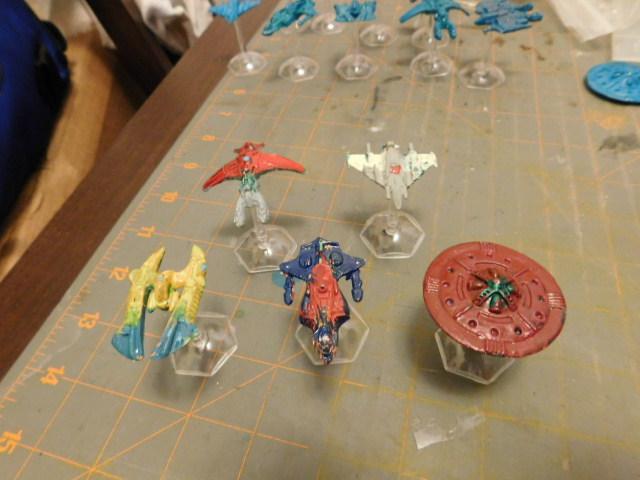 He's halfway through painting one of the rectangular ships and then he'll have a full set.

Here's the two other factions I basecoated some time ago. These are both kind of a disappointment. The aqua ships were painted with a satin blue spray that comes out pretty shiny and that makes it harder to paint. The dusty blue ships were painted with a chalk texture paint that was super flat, but quite grainy. Not great for ships, but I think it will be great for industrial terrain as it should look great when drybrushed and should "grab" a rusty wash quite well. 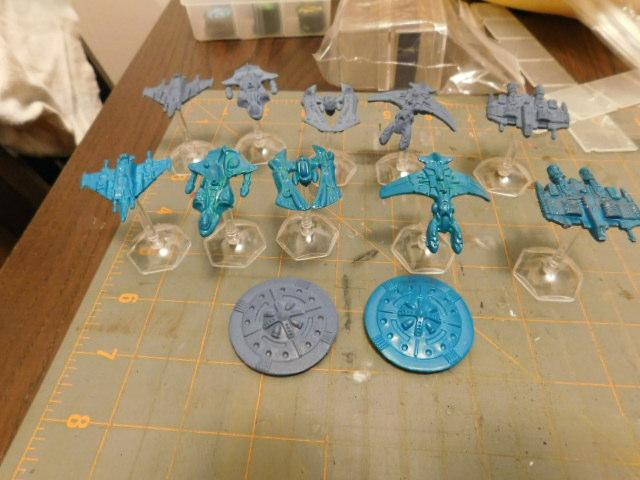 I'm still going to use these, but I'll be sticking with simple 2 color schemes and not investing too much painting time. 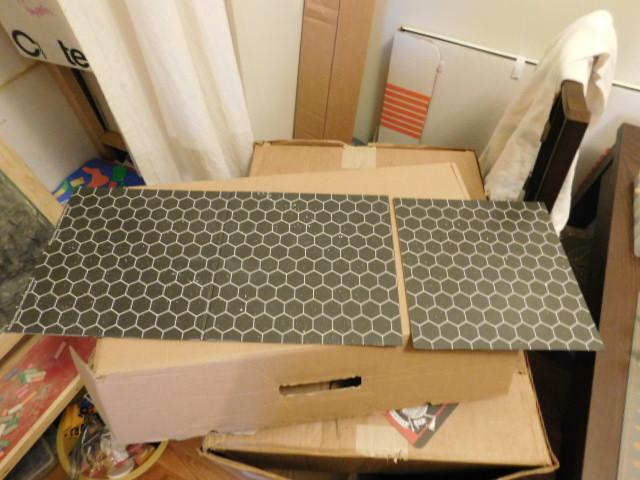 I've just finished painting the 2-color schemes on all the ships and the starbase. I'll take some pics and get them up tomorrow or the next day.
-Karl
Top

Finished varnishing up the ships and the starbase last night. I may go back someday and wash and drybrush them, but given the issues I mentioned before with the blue fleets. it's more likely that I'll just paint up one additional fleet extra nice for myself at some point. I think they look fine as-is. 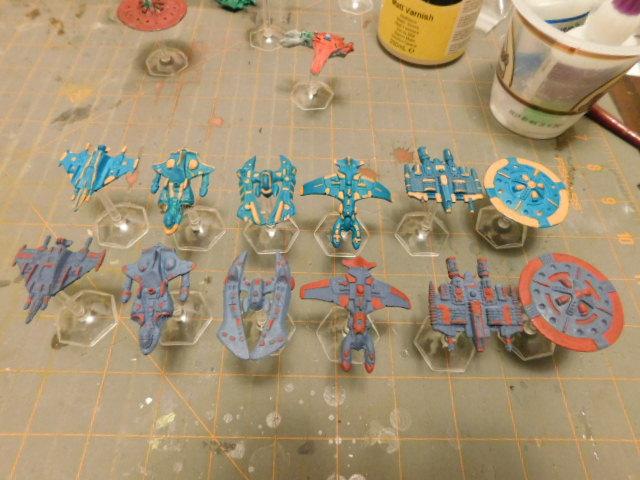 I'm getting low on clear flight stands and I want to save what I have for expanding the above fleets. Black Flight stands (clear is out of stock at EM4) are currently on the way for the ships below. 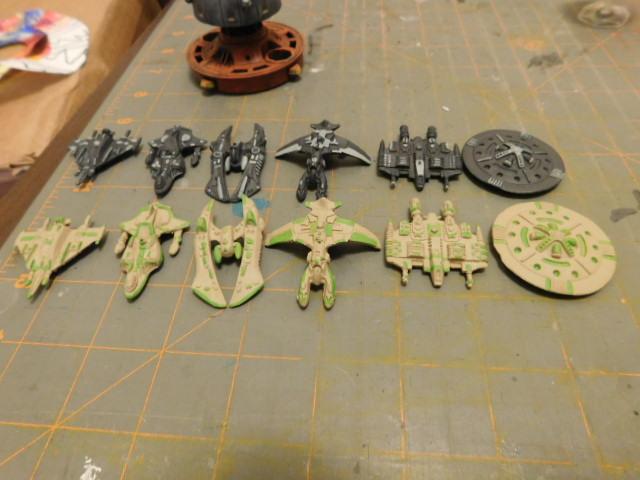 The starbase turned out great but I somehow forgot to take a pic of it on it's own. I'll remedy that this week.

Also had another game last night and got to use my new starbase and some of the ships. Here's a couple shots. I'm playing the Blue with red ships and my son has a mix of his and the teal and Orange. I used a few of the black and grey as Pirates. Everyone starts at the starbase. 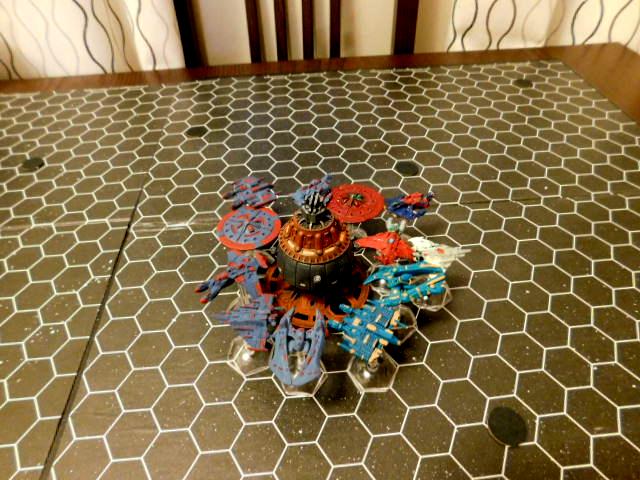 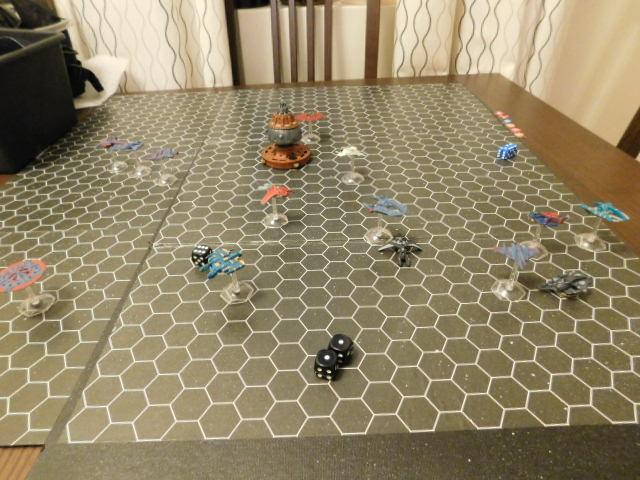 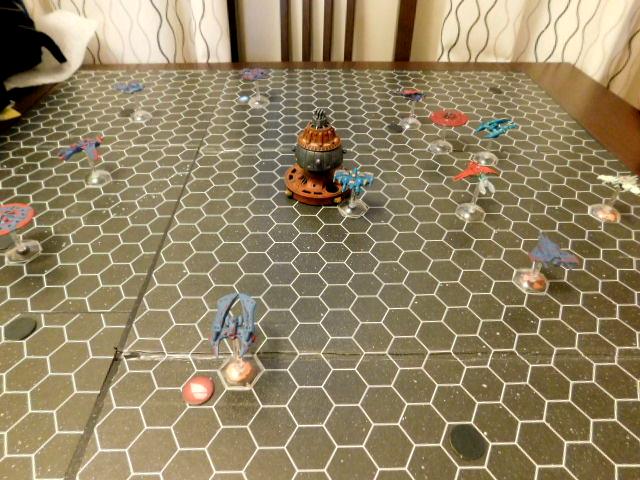 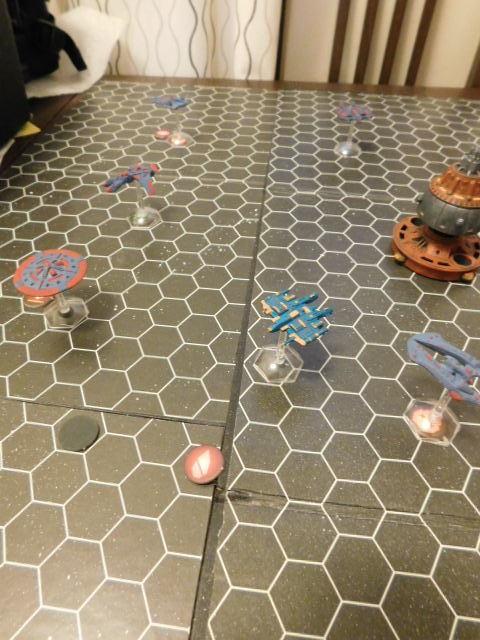 One small recommendation for playing with kids. End the game when the last blip is revealed, not when it is "resolved". The game went longer than my son's attention span when a few pirate ships wouldn't die. The two Pesky Pirates... 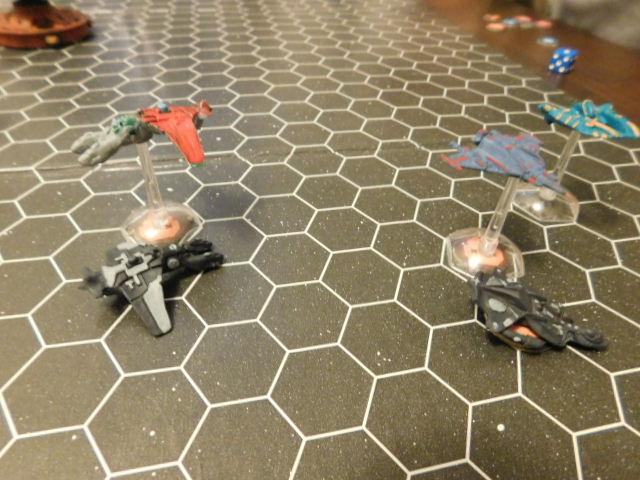 This looks awesome Karl. Nice engaging setup. Good to see he is asking to play!
Top

Played again a couple evenings ago.
Ending the game when the last blip was removed (instead of playing until they all were "resolved') was definitely the answer for wrapping the game up before my 5 year old son got bored.

Haven't received the bases for the rocks yet or repainted them, but he insisted we put them on the board and I'm glad we did. 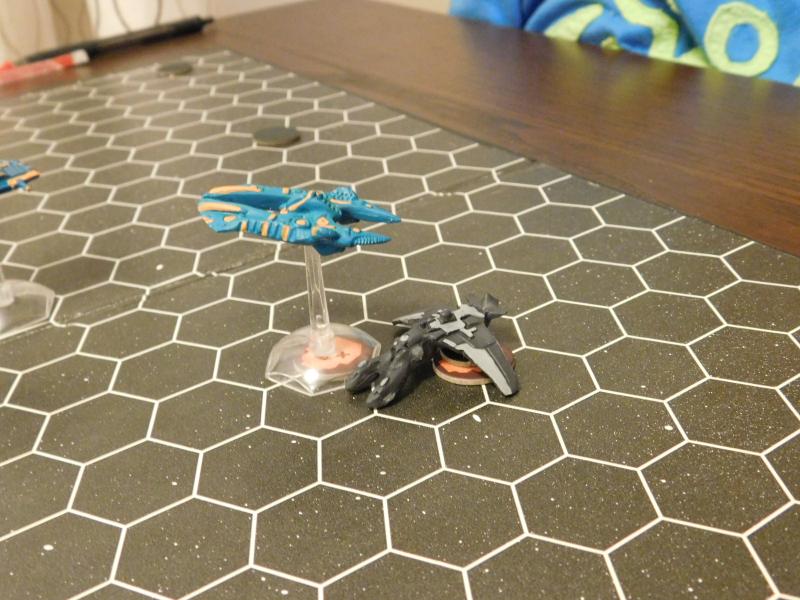 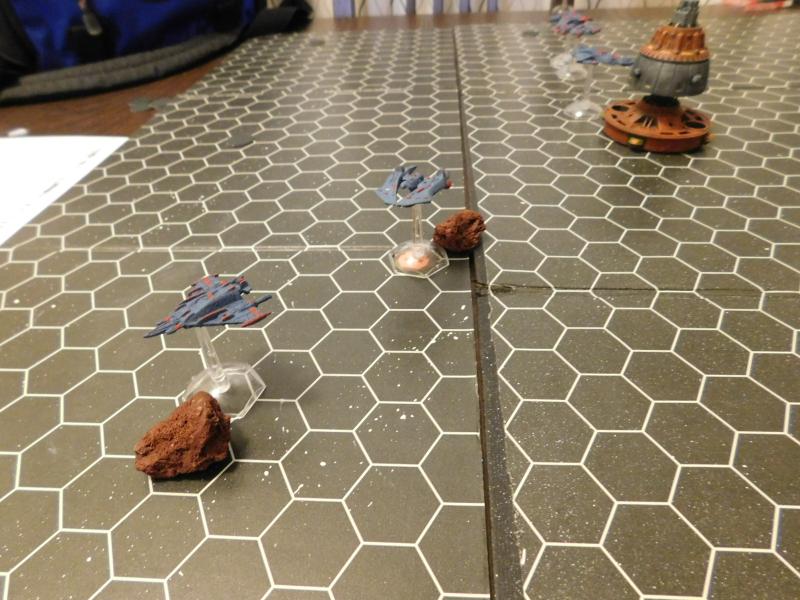 I've gradually worked in all rules except for "transport" so we're now playing it virtually as-written and I don't see that it will change much. I probably won't update again until the bases come in and I finish up the asteroids and salvage bases.

And of course you'll all be pleased to hear that he's still asking to play again!
-Karl
Top
Post Reply
10 posts • Page 1 of 1