Good to know.
I just read elsewhere that the Finns are going to be part of the next release. If they were out already, that's probably what I'd go with.

I decided to base my Brits in an urban style so I purchased a bunch of the "urban" plastic bases from Champ industries. http://www.champindustries.net/orders_b.html

There's only 4 unique base sculpts, but they've worked great for me in the past. Since they're made of polystyrene I'll be able to glue the figs down quickly with plastic cement and patches of grit and rubble should add plenty of variety.

The West Wind heads order has been sent and the MM customer holds have been requested for release, so now comes the waiting.
-Karl
Top

A Finn army would be rad. Curious to see what "weird" units the Japanese will have also. Possible 2nd army ideas if I like the system enough. For now, I must concentrate on one army since its bad enough I got sucked in to another new game. ;P
Top

I think the only weird Japanese unit revealed unit so far is the heavy troopers. 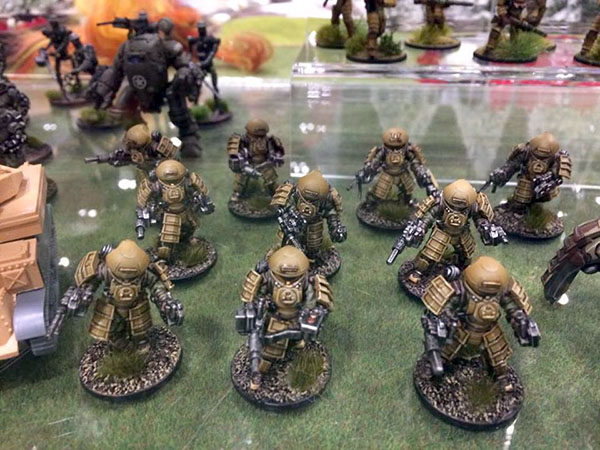 i like those pseudo samurai a lot! so chunky, but still wwii-ish
- Josh
Top

I'm curious to see where they take this. Most of the European stuff is pretty clearly based on 1940's reality and sci-fi. I like that sort of thing but it's kind of refreshing that they're expanding the scope and influences for the Japanese stuff. They seem to have a pretty good balance so far.
-Karl
Top

I'm not in love with it as a WWW2 vehicle, but then I'm not terribly interested in playing WWW2 Japanese either. I'd put it in my Mech Attack games though.
-Karl
Top

it does have a certain wwii japanese sensibility, though.
- Josh
Top

Josh,
No tracking number for the West Wind heads but they have been shipped. What are the new units you're painting up?

Tim,
MM says the starter sets should be here on Wednesday.

I will be a platoon of jump troops, including light and heavy jumping walkers!

I will also have a Jeep done for a 2nd us platoon using the force I brought last game. Those will be available if someone else wants to play.
- Josh
Top

Dang, the US has flying troops!

Getting ahead of myself but I'm already thinking about adding heavy troops. Not sure if I'll use the offical figs or Some Dust tactics heavies though. I gather that both are significantly larger than the bolt-action-based basic troopers.
-Karl
Top
Post Reply
52 posts