Where to get Cork?

All deals are between the individuals, and CSW is not responsible or liable for anything that may happen.
Post Reply
7 posts • Page 1 of 1

Where to get Cork?

Hello everyone,
Does anyone know where to get large chunks of cork? Many terrain articles talk about using cork to represent hills and other items, but I have not been able to find any cock other than flat sheets. Thank you for any help you may give.
Michael
Top

They are usually talking about cork bark in that case. I am not sure where to get it.

You can use large pieces of mulch to a similar effect. You can also use sheets of cork torn and shaped to make some neat terrain. I use it all the time on bases, and in other situations.
- Josh
Top

Most of the large scale cork Ive seen used is cork bark as Josh said. I believe the dust from that isn't too healthy though. For hills, etc I would stick to using 2-3" pink insulation foam that you cut up, and add some texture with sand/talus/filler.
For basing, Im not much of a fan of cork. Small, scatter terrain on a base is cool, but most of the games I play are true line of sight, so all of these people with soldiers 4ft off the ground on a cork cliff seems non advantageous, ;D
Top

As Josh says, I've seen actual cork (I think you can get it at home depot) used to good effect. However, I've had really good luck with dried pine bark which is sold as mulch. Just pop it in your oven to dry and then stack and paint.

This is what it looks like on a base pressed into some premixed concrete patch and no other basing material.

Not to get on too much of a tangent (you seem to be looking for terrain supplies) but for basing some folks use real slate. I haven't tried this yet but I happen to have a fair amount of the stuff that I just scavenged this week as my neighbor is putting on a new roof and the former owner just covered over the 100-year-old slate tiles with tar paper. You're welcome to some of that if you like.

Actually any of you folks are welcome to bark or slate. Just let me know what you need and you can pick it up at a meeting. I've got plenty for figure basing, but probably not enough for terrain.

I agree with Gattz that sometimes rock basing can be rather high. The figs below are glued directly to the base.

The leader is a slotta fig and is based as such, the others have cast-on bases. Rather than basing them even higher, I disguised the cast-on bases with pieces of bark. If you want a really impressive base but want to keep the height down, basing on a washer or using bases from proxie models (which are thinner than standard) can help.
http://www.proxiemodels.com/store2/inde ... ry&path=20

One last thing I'll suggest is that foam rubber -when torn and painted with acrylic paint- can make really fast and durrable hills. Though they aren't quite as realistic as insulation foam, they are much more durrable and less brittle. They don't require a base and they squish rather than chip.
I made some for Mattias https://www.chicagoskirmishwargames.com ... gotiation/ 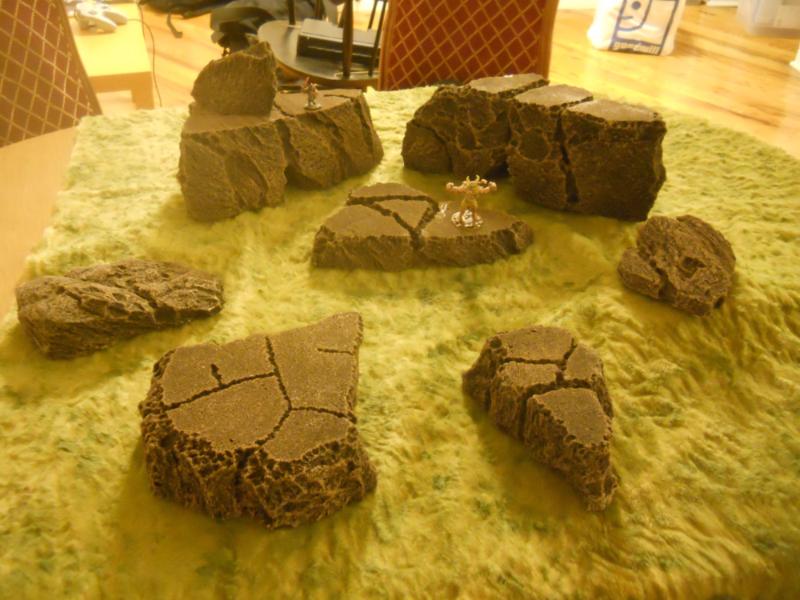 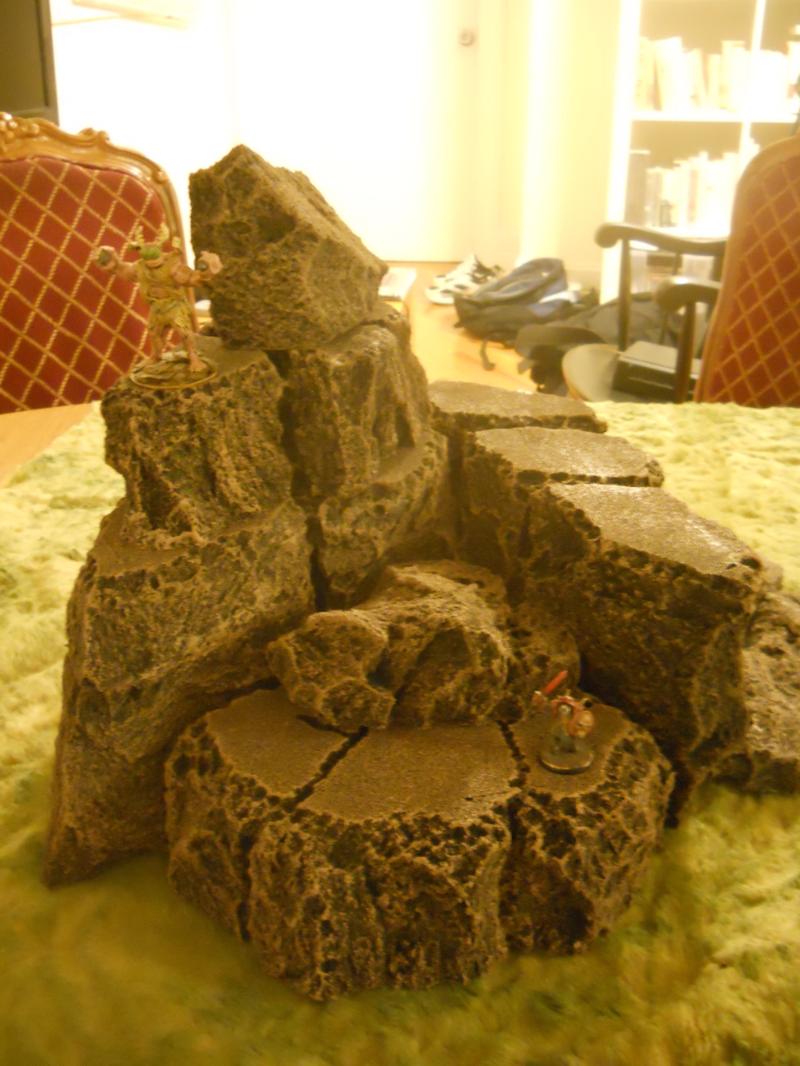 Gentlemen,
Thank you very much for the great output of information! I was looking for large cork for a while now and I finally realized, why not ask my fellow gamers. What I was planning on using it for was for creating southwest desert-like terrain. I like the looks of the standing rock formations in place like Nevada and Arizona and want to duplicate the look. Using flat sheets would require too much glue / work to get to the height of about 5 to 10 inches that I want. I had watched the English Terrain Tutor who talked about the bark from the cork trees and how potentially dangerous they would be to work with, eye opening stuff. From all the work he talked about I would not buy the cork bark direct from the tree. Since it appears there isn’t any large bark chucks to purchase except for the raw bark I think I will go back to using pink insulation form. I have used it many times in the past, but the bark would be able to provide the little nocks and crannies that the smooth insulation form doesn’t have without a large amount of carving. Thank you once again for all of your input.
Michael
Top

if you want lots of nooks and crannies, you may try hitting the bare foam with spray paint. It will melt, so you need to be careful, but I have seen this work very effectively.
- Josh
Top

Spraying is a good idea. I've also seen some folks lay down a sheet and hammer it a bit to make it crack and flake a bit. Perhaps hammering and then spraying would get you a surface that has both cracks and crannies. The spray might also melt some of the chipped pieces in place and actually strenghten the surface post-hammering.

Is the surface you're looking for similar to the foam above? You can get pretty thick foam rubber sections also. I think I have some right now that is at least 8" thick.
-Karl
Top
Post Reply
7 posts • Page 1 of 1

Users browsing this forum: No registered users and 4 guests